I did not want this topic lost in the crowd. I though I would edit it but then I thought that maybe I was post in the wrong topic area as well. Please inform me and I will move it.

I have a little sultan chick about 2 weeks old. He was given to me at the feed store when I purchased another little sultan. He has a slit limp and scissor beak. I was very worried about him but with obsevation he is doing fine eating, pooping, and drinking. His gullet seems full and he is active.
My question is
Can this condition become worse as he grows?
Will he have a normal life expectance?
Is there anything I should know about the condition like i.e. watch out for anything besides the usual stuff?
He seems happy and active, but would he be better off culled? I don't want to be cruel or selfish? 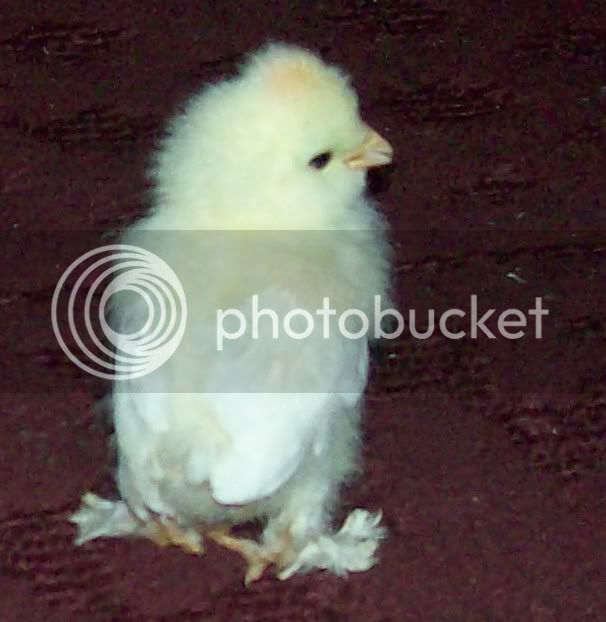 We always fall in love with the weak or injured, don't we? When I got 15 pullets and it came time to choose the four I would keep and which to give to friends, I ended up with the runt, the limper, and the over-eater. Sigh.

I have read that a crooked beak can be trimmed if it is not too badly offset. Someone with experience with this may chime in soon. Good luck.

It seems to be sort of a slow day today. I know it is nice outside here for a change, maybe many people are outside and haven't responded and will later today.

Many here have cross beaks that have done well, others have not. There are methods to trim the beak if necessary. I'm one to try and save anything so I am probably not the wisest person around sometimes. I have only had one attempt with a cross beak and unfortunately mine didn't go well. He did well for about 4 weeks, but he had additional problems with the area directly under his beak also. He finally couldn't get the food down his esophagus even though he was trying to eat. I had to euthanize, and it was heartbreaking.

BUT...please wait for others to show up and help you with advice as many do make it and live fine lives. I remember a neighbor having a very old hen that had had a severe cross beak her entire life and I swear she was at least 8 years old.

You can try the search feature here, while you wait for others. He/she is an aweful cute little bugger.
P

>> Can this condition become worse as he grows?

>> Will he have a normal life expectance?

It depends on the severity of the crossbeak. It's really a skull malformation, which puts the beak out of alignment.

>>Is there anything I should know about the condition like i.e. watch out for anything besides the usual stuff?

You can learn to trim the beak if you decide not to cull.

>>He seems happy and active, but would he be better off culled? I don't want to be cruel or selfish?

Having been through this before with a line of a breed that was rather inbred, my (somewhat harsh sounding) advice is to cull. But I am very pragmatic about this stuff, so other advice may vary. I hatch hundreds of chicks a year, and consider such a genetic defect a problem, no way I'd consider keeping such a bird. But if you're going to just have pets, you may find you have the time/energy to deal with such a bird.

Sorry about it, I know, the ones with problems are so appealing on a certain level, you want to feel you can fix them and help them. Sometimes you can, sometimes you can't...

Hees a good site. Scroll down.

I don't agree, however, that the bird should be culled right away. Wait and see how he fares. As others have already said, the beak will only get worse from here but can be taken care of, if the defect isn't so bad. You have to watch though, and I know it's hard, but you may have to put him down. We always get attached to those who need us, I'm afraid. Sultans are wonderful, sweet chickens. We lost our Sultan boy a few months ago and are still feeling the pain. I wish you luck with your tiny chook. Others have made it work, you may be able to as well.

I have one that has a Cross Beak. He is also missing an eye which can be common as it is a malformation in the skull. Mine is robust, happy and (I tell him all the time) very handsome. He is a Barred Rock and almost 8 lbs. I regularly trim and/or file his beak. As a baby, when the beak is VERY soft, I used kitten nail trimmers (not dog, too big) and took just a tiny bit off, then filed with an emory board. It is good to get them used to this at a young age. Be careful to do in good light so you don't "quick" the beak. It will bleed horribly. Have some blood stop on hand when you trim just in case. Because of the malformation, mine's beak was a bit brittle on the top where it curved and one day he must have knocked it into something because it broke. Awful thing, I had to handfeed for a day because it was so sore. FYI: ambisol for sore mouth/gums on people works well in this case to numb it.
My roo's beak was similar to yours at that age. As a baby, I made him a damp mash to choose from with the dry chick starter. I also supplemented him with polyvisol vit for the first 1-2 weeks. As an adult, he needs a deeper food bowl and I use a rubber feed bowl from the farm store. He needs the deeper bowl to be able to scoop. He cannot pick things up like a seed or bug off the ground and this is a bit sad, but really he seems a happy bird. He likes treats with all the others and especially raisins. I have learned how to give his couple raisins to him by holding him in my lap and he tilts his head a bit while I pull on his wattle to open his beak and poke it in the corner of his mouth so he can get it. I have several special needs birds and do not breed. 1. Because there is always another bird around the corner and 2. I want to be responsible and not breed genetic defects. Keep this in mind. Also, your chick will not be able to peck you much when he gets older, or defend himself with his beak so may need some special watching. This is good in a way for you and the hens, if it is a roo, because his pecks feel like him bumping against my leg and he will have difficulty grabbing on to the girls for mating. Mine has learned he has more to grab on the hind end of a hen with her tail feathers and does the deed backwards. I keep telling him it doesn't work that way, but he doesn't seem to care.

Ok at the first sign of not eating I cull.
However for now he is doing fine. He is one of the mascots at the preschool. I would like to know how to trim the beak.

What is the best method? Do I need a special tool or type of clippers? How often? or how long?

He is one tough cookie for sure. He runs around and is so much braver than the other little sultan that I have.

I am brave also and I can certainly put the liitle thing down if I notice signs of stress, not eating, or listlessness.

If I must.
how is the best way to cull? or break the neck?

I will not be breeding any chickens.
All crowing Roosters will be rehomed or at worst culled.
All eggs will be eaten

It gets harder to cull a bird the longer you have it.
Most people recommend cutting the bird's head off with a very sharp knife.

Breaking the neck can leave the bird alive and suffering (I know this from experience, not a nice thing). When they are very small you can end up with the head in one hand and the body in the other with the snap of the neck. One member of BYC claims to still have nightmares from this happening to her.

Other people put the bird in a plastic bag and crush its head with something.

You can also take them to the pound.

4 week old chick with deformity- curved beak and possibly blind in one eye?

Help! Ayam Roo is "sleepy" and liquid is coming from his beak and Silkie Hen is "tired" and doesn't really want to eat/open her beak
2