Serama Weigh In (with pics)

So I've been really concerned lately because my Molly girl is coming up on six months and still hasn't laid an egg. Then looking at Jerry's site, I noticed the weights according to the Micros, and A,B,C or D status. According to Jerry, the Micros and the A's are not going to be good for breeding as their rarely fertile. My Molly is pretty tiny like a dove, and I thought wow, maybe she's an A? So I nabbed the postage scale from work.

Rohaus turns out to be a real Hoss at a whopping 24 oz. He's a D. How can a chicken so tiny be a D?! Oh well. He's a beautiful D and I love him in spite of his big ol serama butt.

Molly turns out to be a C at a whopping 16 oz. But I read that C's are good breeders and can still throw A's and B's. So she's still in my good graces too.

Actually I love them both so much, I don't care if they were M's!!

What do your kids weigh? 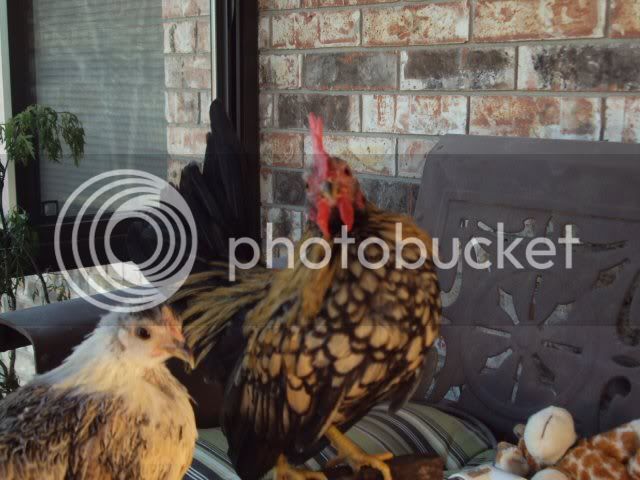 Very pretty! I just had a weigh in too! My hens were both 13 oz and my roo was 16 oz on the dot. I'm pretty happy with them all

Yours are adorable and yes they can still throw little ones

And better breeders as well. My hens seem so fragile I'm afraid to put them in with the big boy

Wow! That is truly tiny! Congratulations! I'm really just hoping for some eggs from her soon. I've spent oodles of money on shipped serama eggs and nary a chick hatches.
I'm dying to see what they give me. What I really want is a tiny little hen to become my inside/office chicken that can go to and from work with me.

my roo is prob a like F hes a biggen!!! lol i should prob weigh mine shouldnt i

I weighed mine a couple months ago and had mostly B's, an A or two maybe and maybe a C. You can see pics on my BYC page

You have some beautiful birds poultryhaven. It's my dream to have a couple of silkied. I've ordered serama eggs twice by the dozen and nary a one has hatched, this last batch had silkied and frizzled possibilities. 3 made it to lockdown and were full of chick but never hatched.

I'm picking up a little pullet to relieve Molly a bit from Rohaus' attentions this weekend and I'm hoping to get them all happily married. I'm going to have to give up on the shipped eggs for now. It's too disappointing.

I hear ya, shipped eggs! I'm suprised that your hen is a C, she looks so tiny! Anyway, looks can be deceiving. What I thought was my biggest roo actually wasn't, and my tiniest hen doesn't weigh the least, either. The lightest one, Stella, is 10.5 oz, but she's not been well. She used to be a good layer, but she's losing her toes to frostbite (amputation as a weight loss plan!). My littlest one, Lita, is 7.5 months old, and not laying yet, and she's about a half oz heftier than Stella. my lightest hen is 14oz and the other hen and roo are over 16oz but my scale only goes to 16oz so the needle just hit the bottom.... so i was right my roo was an F