Good Morning everyone .
I need a shade cloth for my run . But I am not sure which % in need 50% 60% or 80 % . I would appericate any help you all can give me , and where to buy it . I think the shadecloth store but there might be a better place.
Thank you in advance

Not sure what kind of hardware stores you have there but I went to Lowes and got sun shade screening to lay over my run. I dont remember the uv protection it has but I know it works really good for my birds.

Thanks I am in North Carolina until the end of March so I have time to look .

Welcome to the forum!

Are you aiming for the greatest heat reduction? I have tried several different percentages of shade cloth, including the 80 percent, but the one that seems to work best is the aluminet:

We live in Texas, where 100 plus degree days are common in the summer, and it gets even hotter than that in the sun. So heat is a real problem here. If your summers are milder, it may not matter so much which kind of shade cloth you pick.

As far as where to buy, I'd suggest you do some internet searches to compare prices between your local home improvement stores and online sources. Pricing for essentially the same products can vary widely.

IME the lower-percentage shadecloth is more useful for plants than for people or chickens... unless it is way more expensive, buy the highest percent shadecloth you can, like 80-85%. Wind and rain still go thru it well enough that it won't collapse after a rainfall and won't flap in the wind as long as you install it tightly.

Note that if it will be installed near-vertically, you will get a higher *effective* percentage of shade during the middle of the day b/c of the sun being at such a steep angle to it. But in late afternoon, usually the hottest time of day anyhow, vertical shadecloth on the W side of the run should be high-percentage to provide good shade.

Quote:
I live in the Desert and even 50 percent is quite nice to take the edge off. You might also try Harbor Freight... I just posted the link on another site Now If I can find it.....
http://www.harborfreight.com

Key in the words Mesh Tarp. The great part about these is they have grommets and are already finished around the edge just like a regular tarp. I bought one for using to cover loads in the truck. They work great for that because the wind doesnt make it billow and flap.

Now I am off to check out the shadecloth store....

I didn't even know they had something like shade cloth until I picked it up at harbor freight. There was a price tag for 5 bucks by a tarp, I thought it was the shade cloth. I freaked when I learned the real price and put it back, but I might go back and get it. I have some tarps cable tied to the pen, I piled stuff near the bottom cause sunbeams go there in the summer, the shade cloth would be nice, for some of it anyway, maybe shade cloth along the front attached so I could lower and raise it. 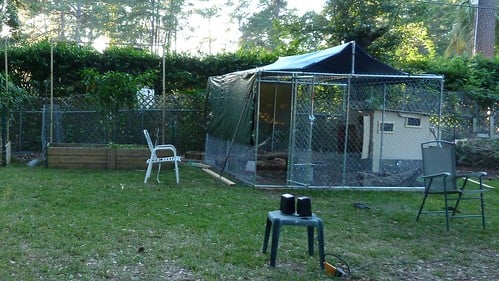 see, I just have tarps, they are doubled over and attached, with a board in them to weight them down.

The only two knocks against it are its price and the fact that obviously it will never be a *solid* roof, although IME if it is installed at a reasonably steep angle as opposed to horizontal it WILL actually block most rain from going thru and the worst you can get is a wind-blown mist coming thru during a fierce storm.

A
Advice needed for a chicken yard build

Attaching hardware cloth to metal run: to drill or not to drill?