Should I cull her? Hen pecked BADLY **graphic images**

Went to check on the chickens today and I found a pullet I had added to the flock 3 days ago very badly injured. She's rather quiet, holding her eyes shut for a couple seconds here and there and probably in unspeakable pain. It looks like they've torn her skin right off. 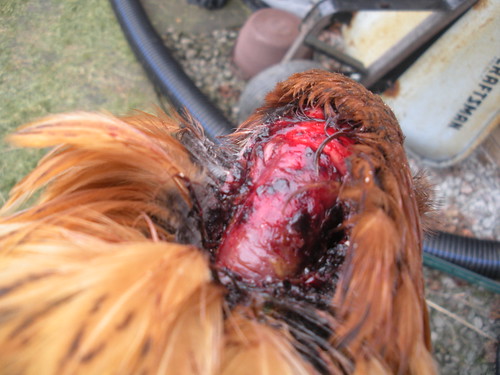 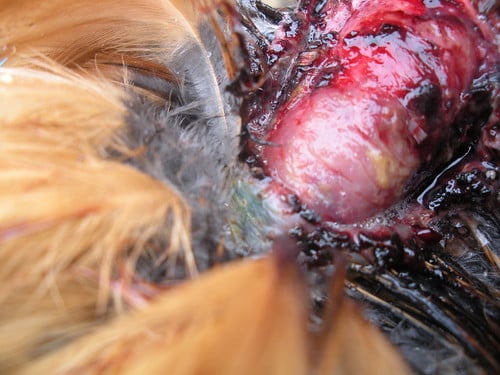 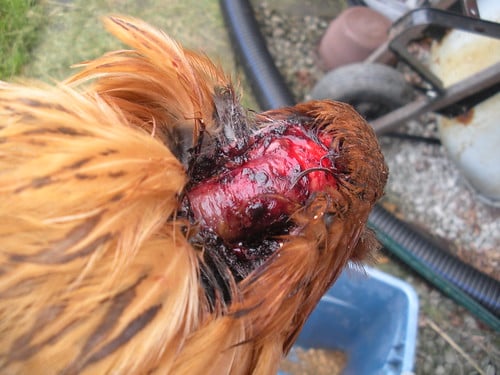 Is it going to be worth it to try and nurse her back to health or should I just cull her? I don't want her to be in pain while I vainly struggle to get her healed only to have this happen again.
It's cemented my decision to cull a couple older hens I have that have taken turns being pretty mean (but nothing this bad has EVER happened before).

The entire back of her neck, from almost to the top of her head, down to where her back begins has been stripped clean.

i think it will heal.keep her by herself and keep the wound clean with mild soap and water. do not wrap it up becuase the air will help it heal.do watch out for flies.i would put her in a pen in the house for awhile.

She definitely needs to be separated and kept in a quiet area. Chickens are remarkable healers. I'd clean the area with some diluted Betadine then apply Neosporin. I would add her back to the flock only after she has completely healed with no exposed skin, otherwise the others will keep pecking at her.

You indicated that she had only been with your flock for 3 days. How did you integrate her? Chickens are not very nice to newcomers. Adding chickens must be done over a period of time, and adding just one to an established flock can be difficult. Can you get her a few friends to add at the same time?

Your bullies probably don't need to be culled, just disciplined. I'd take the offenders and place them in a time out, like a dog kennel for a day. They will likely be knocked down a peg from the pecking order when they return, and your new ckickens can have the opportunity to gain status with your more docile girls.

Best of luck for her recovery!

I would put her in a crate, clean it with something like iodine, coat it with blue cote, put her on a broad spectrum antibiotic

Good heavens! Poor thing....I suggest the same, give her a chance, keep her inside and clean, bugs off and I am sure she will heal beautifully, just be careful next time you add to the flock...do it in pairs...good luck!

We had a turkey get a HUGGGEEE hole in his vent area. He healed up fine. I really thought he'd die it was so nasty, but he didn't and surprised the daylights out of me.

I don't know if this product is okay to use on chickens as it's designed for horses but you could probably google and email the maker. It's great stuff, especially for areas that you can't wrap. It's called Underwoods Horse medicine and you can spray it on with a spray bottle (shake well first) and then you puff on some baking powder. It forms a sort of band aid and heals things up pretty quickly.

I never bother to try to integrate new chickens. It's just too much worry and hassle. I just build a new pen for them LOL.
Last edited: May 23, 2011

I definitely wouldn't cull her, but I would do as the others suggested. Isolation, a good cleaning of the wound, spray with blue kote, and use some type of broad spectrum antibiotic. She should heal up nicely! You would be surprised what they can come back from!

Sounds like everyone has the wound care covered. Here's a link to integrating new birds to your flock:

I've never had any issue when integrating new chickens before now, typically they spend 2 weeks living in the covered part of the run in a cage of hardware cloth, so they're fully exposed to the sounds and smells of flock life. Then I let them have several days of supervised "getting to know you" at the end of the day when the old hens are getting ready to go in for the night, after those several days have passed, I put the chicken in at night and all typically goes well.

I can't get her some friends because I have 4, 6 week old pullets that I'll be adding (she's 12-14 weeks) that will be putting me at my max for chickens. I am so angry right now.

I've tried the "disciplining" method before with the trouble maker (I know exactly who she is), a 3 year old NHR that has picked on others before, but never like this. She loves being big chicken and even my rooster leaves her alone. Early this past winter she did quite a number on one of my GLW's comb, so I put the NHR in 'jail' and got the GLW healed up reasonably well and back with her flock mates within 48 hours.

I tolerate her because she's a great layer, and to be perfectly honest, she's going to be culled this fall anyways, so I'm thinking that I might keep the injured bird with me for a few more weeks, stock up on some eggs, cull the old girls and add all the new pullets and injured chicken in at once while the pecking order is temporarily FUBAR.


ETA: obviously, injured chicken would be healed by the time she was added back.
Last edited: May 23, 2011

Sounds like you have a good plan, Kitchwitch! I would definitely be sure to keep the injured one in a place where flies cannot get to her. If she gets maggots in that wound, they will eat her alive. It happened to one of my hens who had an injury where I couldn't see it, and she died. Other than that, your hen will probably heal up nicely if she's kept away from the "Badd Girlz". Chickens seem to be able to get new skin over huge denuded areas.

Can we save her? Warning: graphic images

To Cull Or Not To Cull: Advice Appreciated
2

chicken with pecked head and eye