Hi All;
I have a very sick 2 week old Bantam Cochin chick.Thursday evening I found him all sprawled out in the brooder with his legs out behind him. (Marecks?) There are 2 other chicks in there and they are fine. I have put him in a brooder to himself. He cannot walk at all, keeps his eyes closed most of the time but when I talk to him he perks up and starts peeping at me.
I have mixed up a concoction of mostly liquid supplements and have been feeding him with an eyedropper several times a day. Other than that, it's a wonder this little thing is still alive. I will sometimes find him on his back with his legs stretched out behind him just chirping away.
I had a chick several years ago that had Mereck's but it was much older than this one. What else
could it be?
Thanks Cindy

Will he eat on his own?
Do you have a video? Or photos of the legs?

It could be a leg deformity, injury or possibly a vitamin deficiency.

Offer poultry vitamins that contains B2(Riboflavin) or crush a human B-Complex vitamin and add to his chick starter.

You may want to make him a chick chair so he can be upright and see if he can eat/drink that way.

At 2wks, it most likely is not Marek's. Usually you don't see symptoms develop until around age 12wks. 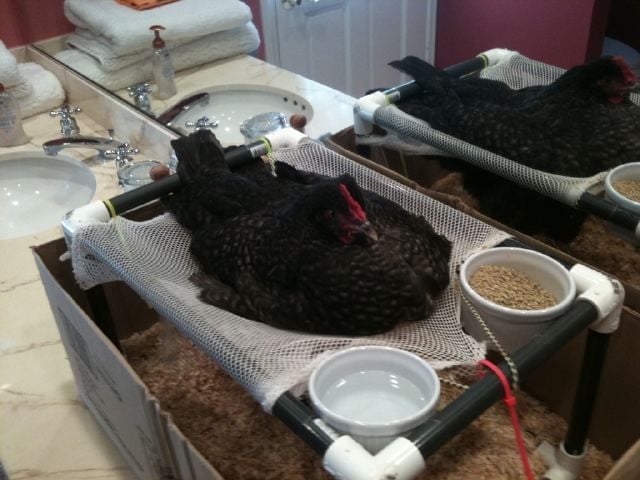 Hi;
Thanks for the reply.
I really didn't think Mareck's either because of it's age.
Love the idea of the chick chair. I did just see him try to
peck at some food so that's a plus. I have been mixing a couple
of drops of poultry cell in with the electrolytes and chick starter.
I let it all soak up and then feed through a syringe. It is pretty much
liquid but he is getting some.