I have purchased 3 ducklings so that my duckling I have hatched from an egg would have proper company. Well, I ordered them online and a friend of mine who live in their vicinity brought them to me. They are 19 days old and like 3 times smaller than my 4 days older duckling. They are missing a lot of fuzz, in fact one is almost completely bald, they have bald spots on their necks, wings, abdomens, well, everywhere!

I would not have taken them in such condition if I would see them. I really hope they are not sick. Perhaps they were just neglected and had issues with adult birds or larger siblings.

They are extremely scared and they squeeze themselves into a corner, shivering in terror whenever I bring them food and water. They do eat and drink. It looks like it took one - the largest duckling, to start eating and the other two followed. I am optimistic because of that and hope they will be OK. There seem to be no blood in their droppings.

When they drink, they make sounds like they are using a high pressure equipment. My duck is a lady, doing it slowly and graciously without so much splashing and weird sounds.

Do you think it's possible they have some kind of disease or parasite infection?

Photo can't capture the damage of their fuzz. Some parts are brown-ish and bald. By brownish, I mean the fuzz. I did not see any open wound or anything similar, skin seems to be intact. 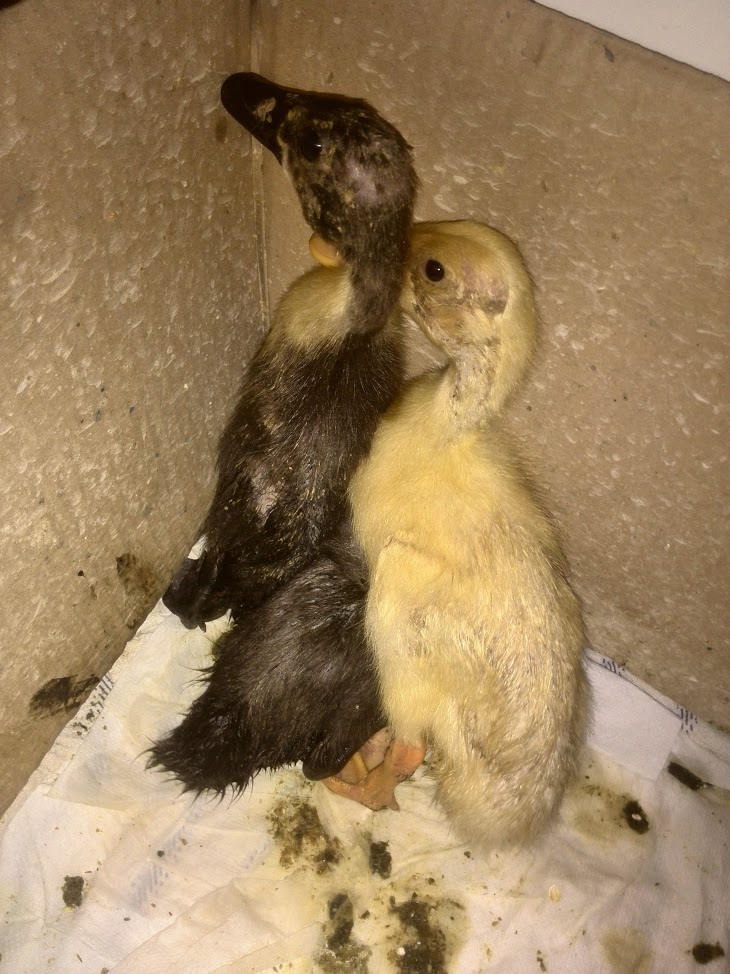 That is from older birds ....Neglect is my thoughts also...They are extremely scared so talk in a soothing voice and in time they will soften to you...Poor Ducklings....

They are really small! I mean... The smallest one is just a bit bigger than my duckling when it was like a week old.

Beside the fact that they are terrified, they seem to be getting better. I've seen one snapping at moth or a fly. I'll try to introduce them to my duckling tomorrow. They will surely benefit if they can eat some bugs and fresh greens.

PS: And I was wondering about my duck's diet... It would be larger even if I'd be feeding her greens only...

Those poor ducklings haven't been taken care of. Are you feeding duck or chick starter? They need a balanced diet and if you feed anything else a long with it they will need grit. Keep them warm so they won't chill since they are missing their down. Feed them good 24/7 and plenty of fresh water always in something deep enough so they can wash their eyes and nares out. They would probably enjoy a nice warm bath just be sure to dry gently and put them right back under heat source so they don't chill.

I have made a small fenced area and let the three 'adopted' ducklings in. They grouped up and started communicating with my duckling that was walking freely outside. Until this day, duckling I hatched 3 weeks ago walked after me, wherever I went, he ran behind and called me in case he missed me when I sneaked away. I could also leave the duckling with other people, they just needed to show her hand and calm her down. She laid beside and waited for me to start moving. If I waited too long, she started foraging on her own, but remained very close. Well, today, before I placed her into the fenced territory with ducklings I bought, she did the same...

Then I placed her into the confined area with other ducklings. All 3 ducks started following my duckling and occasionally pecked at her. The smallest duckling went nuts and started biting her harder. She acted as she has no idea how to defend herself - She is like 3 times larger than that small little bird! That small bugger is also the baldest, he/she is missing most of the fuzzy feathers on the head and back. It also stinks quite a bit! Even after a quick bath. Well, back to the story..
When the small duckling attacked her, others started pecking at her as well and I decided to take her outside again. Inside, she got nervous and started shaking. She couldn't eat, drink or sit down for more than 2 seconds. She started drinking again outside, eating normally, but she did not want to leave the place around the ducklings. They were communicating and she was constantly talking back. After a few hours I tried again with the same result. The small one attacked her yet again and all three were running away from me as they were since I got them.
I then changed my plan to introduce them all together. I picked up the small aggressor just after an attack he committed. I placed him into a bath and washed him. He still stinks though. After that he got a nicely warm residence in a plastic container filled with straw in full sun, so it could warm up and dry up. It was around 30°C and other ducks were in the shade. He opened his bill at me whenever I stood up or moved. He must be one nervous duck! He must have been the prime target for all the larger ducklings.
When he was dry enough, I placed him next to the improvised pen where I kept the remaining two ducklings and my large duckling. They did not have any issues together.
At that point, he escaped the container and got trapped outside the pen. He did not run away, he tried to get back inside to her two companions. I placed my duck outside after a while, and whenever my dog came close, he tried to go to my duckling (and she tried to go next to me (I'm still her protector I guess

) and he rather ran to the pen and circled around with the ducks inside). He must have picked her as a leader. After that, his attacks towards her stopped.
I placed the small duckling with his friends again and tried to take my duck for a walk to eat some grasshoppers. At that point, she did not want to leave and I placed her inside. They grouped up and walked after her, she calmed down and started eating and drinking normally.

And here's the best part. After that, the other ducklings stopped being terrified of me or other humans. They still go away when I come , while my duckling comes to see what I got her, but they don't run all around hysterically like they used to. They do, however, come late to the party when I bring them goodies. They will learn - I make sure they get their share!

In late evening, I picked all the ducklings and took them inside for the night. None of them was panicking like they did last night and this morning. I think there is a chance they become great ducks!

Sorry for such a long post! If anyone read through, congrats

And some photos. You can see the difference in size! My duckling is humongous! 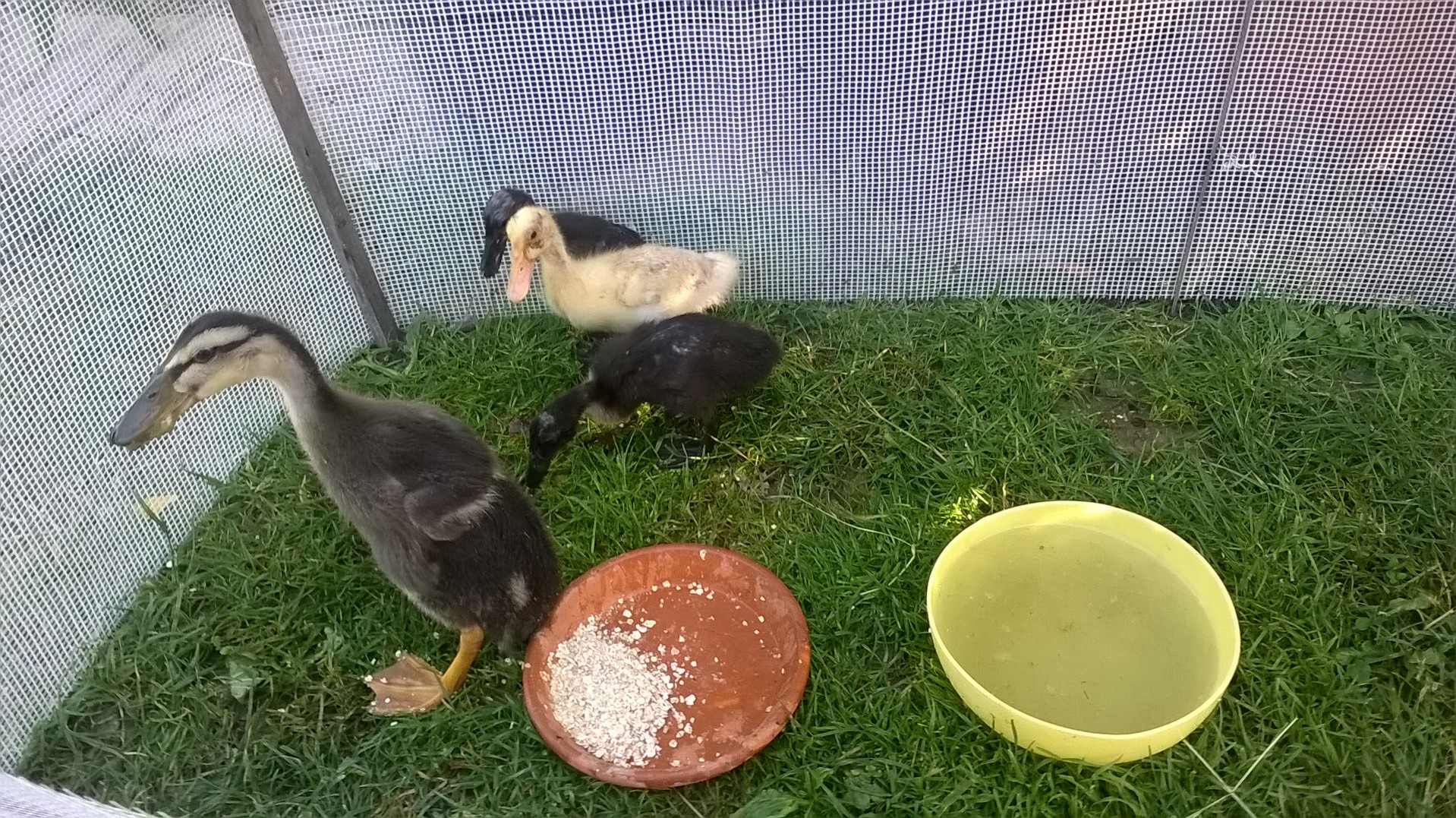 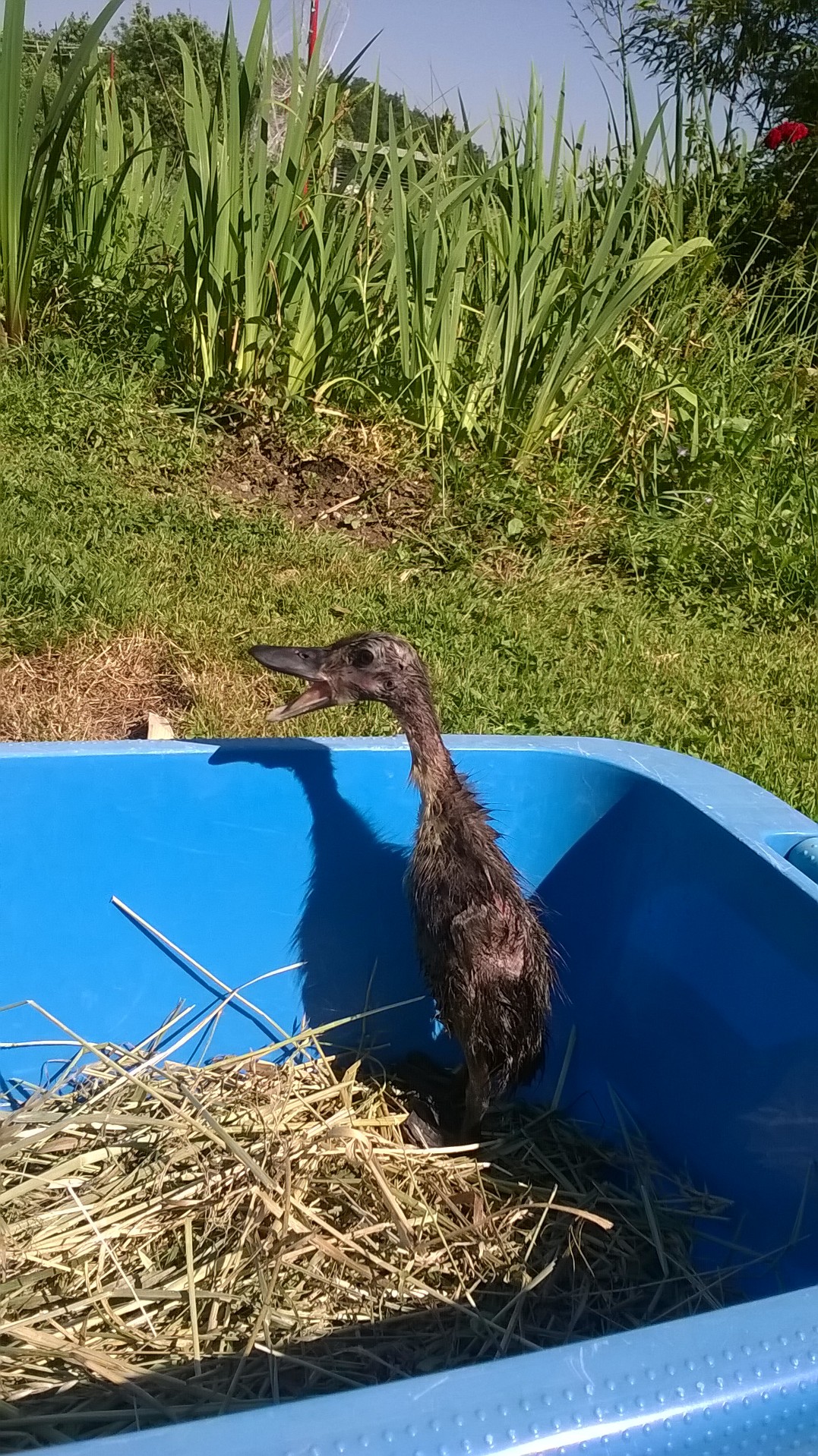 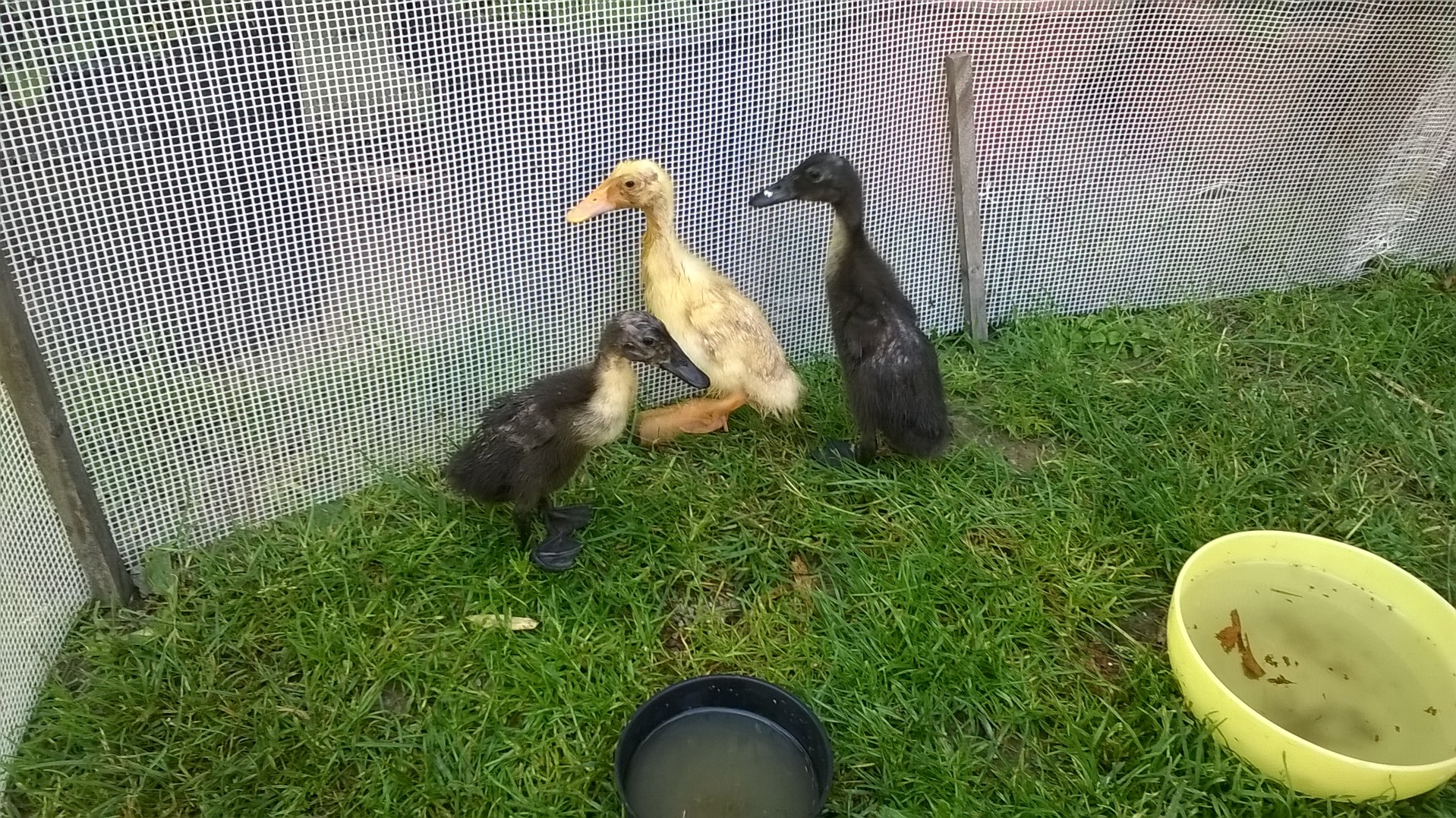 Where the West Begins

Seems to be working out thanks to your vigilance!
Can't believe that tiny bully picked on your giant duckling!

Kids today!
Will be watching for further updates.

Very well done! Terror in animals can make them do crazy things, like a tiny duckling trying to dominate a very larger one... the poor little 'ling was just trying to get the upper hand before he got picked on, from his point of view... your ducklings shaking (vibrating, I call it) was her natural instincts to express her domination over the 'intruding aggressors'... putting the one in a situation where his fear of the dog was greater than his fear of you or your duckling actually helped him see that she could protect him rather than bully...

The bald spots are from being kept in dirty and/or overcrowded conditions... ducklings get wet, feed/poop/bedding gets stuck and matted into their down and if they aren't given proper bathing time, they will itch and scratch off the crusted gunk which pulls out their down...

Very glad they have a great home now, and no doubt they will be just fine in no time...

By the end of today, they are accepting me as a possible non-harmful creature. I have brought them chopped slugs several times during the day. At first the large duck (she's growing nicely colored feathers! Red - brown combo. I guess it will be something like standard lady mallard duck) got almost all the sluggish treats, but eventually the small ducklings figured out what I was bringing to them in brown tray (plastic water tray I took from some plants). By the end of the day, large and somewhat slow duckling couldn't get more than a couple of pieces, the small ones instantly filled their 'satchels' when the tray dropped down. The last time today, It did not even touch the ground, they attacked while I was still holding it. Nice progress!

The even more important thing today was something completely different. I did not plan to take them for a walk, because it was so early and the ducklings are still somewhat wild. When my duck called me when I went into direction where the pond is, I decided to try. I knew the ducklings will be right behind her and I expected her to follow me. She did. And they did! The only problem was, they have no hunting skills. She got like 20 or more grasshoppers and other jumping creatures and the other ducklings just followed her and only caught a few she missed. I tried feeding them with my hand, but they are not ready yet. As soon as my big duckling noticed I have something in my hand (instantly! Can't figure out how she can monitor 10 things at the same time) she ran towards me and pulled the insect out of my hands. Others saw it, I'm sure they will start taking treats from my hand soon.

I tried to put my duck into the pond, but she jumped out immediately. I guess she is not ready. I'll have to do it again when there are no dogs around and no other humans as well. They will need to see her floating in the water. They sure need a good cleaning. They stink a bit less though. There are bitemarks around the bald places . I did not see the dried blood before, now it is evident. I guess they will get better looking when they start growing feathers. Since they were not fed well, that could take a week or two more. My duckling is feathering-up in her fourth week. I guess in a week or two, they will be the same size as she is now.

This time I tried taking a video.

Here' they are, trying to catch some insects in the grass. They were not nearly as effective as the large one which is not filmed - she saw me holding the phone and thought she would rather stay close.

And here are the ducklings when I brought them slugs. You can clearly see the difference in size in this video! Sorry for my shitty phone and it's crappy camera.

L
1 duckling with niacin defiency, only eating mealworm for now and 1 more duckling not eating or drinking at all.
2

B
Is My Duckling Sick?
2