Slightly confusing situation and one I can't find a similar case to hence why I'm finally posting this. Please bear with me and hopefully, I can do a good job explaining. The problem is with my Brahma roo (pictured) but there is a secondary issue of yellow poop which is the case for some of the others in the flock too.

I've used the following questions to answer everything and hope it gives a clear idea of what's going on.

1) What type of bird, age and weight (does the chicken seem or feel lighter or thinner than the others.)
The bird in question is a Brahma chick roughly 8 weeks old. Weight and mass as it always has been, growing as expected, so normal but haven’t weighed it yet. The rest of the flock are of similar age light sussex, leghorn, bluebell hybrids

2) What is the behaviour, exactly?
Two things of concern. One is the poop being what it is (in pic) but this is not just the Brahmas but also some of the others too.

Second is that the Brahma is sneezing regularly and has a rough cough like noise (almost adult like) which is very loud for a bird that size at least. It also shakes it's head a lot too.

Important to note that there is no discharge from or around the nose nor the eyes. No swelling of the head kneck or body either. No wheezy breathing, in fact I've had it in my lap for longer periods and it is breathing normally. No ruffled feathers. No open-mouthed breathing (aside from when it was hot but that was the case for each of the birds). It has totally normal behaviour otherwise. Calm mannerism, enjoys attention and being picked up but tries to run away too. Plays with the rest of the chicks sprinting around trying to fly and darting around as well as foraging etc.

3) How long has the bird been exhibiting symptoms?
Sneezing/coughing for the last 4 days or so

4) Are other birds exhibiting the same symptoms?
One other bird has started to sneeze in the last 48 hours but no rough cough etc. This may be unrelated however I'm now concerned as I've just lost a chick for a different reason.

5) Is there any bleeding, injury, broken bones or other sign of trauma.
Nothing

6) What happened, if anything that you know of, that may have caused the situation.
We have had a heatwave lasting a few weeks. During the day they are outside in an enclosed space. They have a water container they drink from which I refill with a watering can. On one occasion when I was refilling the container, this chick darted over and stuck it’s head under the water. It quickly retreated shaking it’s head and began to sneeze/cough. That’s when this sneezing/coughing episode began. Before that, nothing of the sort existed.

The only other thing that has changed is I acquired 3 new chicks (one passed) but they are in quarantine.

7) What has the bird been eating and drinking, if at all.
Chick feed (18% protein I believe) and plain water. Aside from that, spinach leaves, grapes and whatever it can forage.

8) How does the poop look? Normal? Bloody? Runny? etc.
Poop is yellow mustard colour and runny. Picture attached. However, this poop is something I see a lot in my flock and it started the day I switched their chick feed brand (which was about 2 weeks ago). The one they had since they hatched made them all poop perfectly normal but is only available in small quantities. This chick feed comes in 20kg bags but it made almost all of them poop yellow like this at first, however most a now normal, but I still see a lot of this yellow/mustard poop. 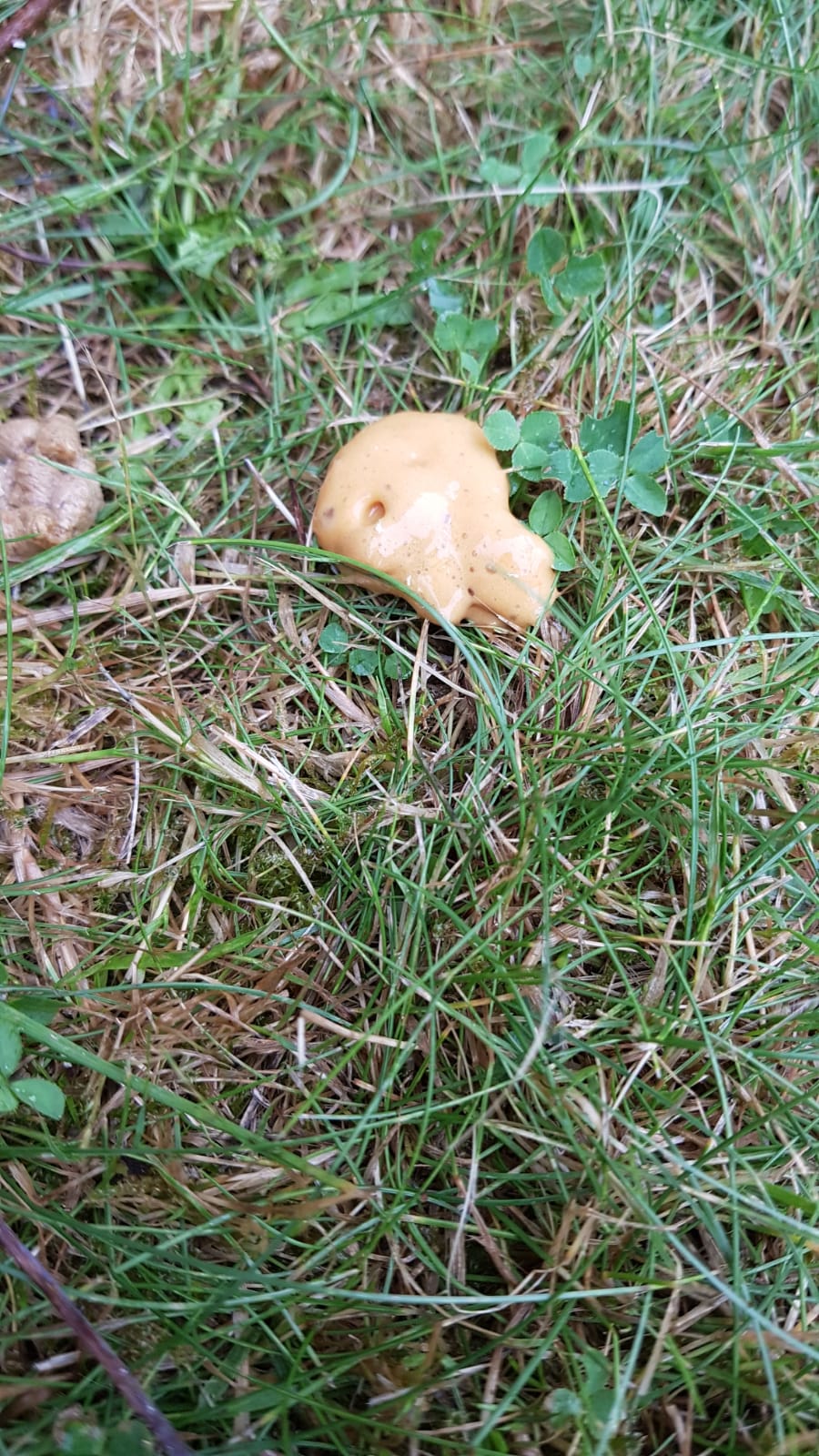 9) What has been the treatment you have administered so far?
So far the only “treatment” I have given them is apple cider vinegar mixed in their water but that was started when their poop changed to yellow mustard about 2 weeks back.

10 ) What is your intent as far as treatment? For example, do you want to treat completely yourself, or do you need help in stabilizing the bird til you can get to a vet?
Would like to treat myself.

11) If you have a picture of the wound or condition, please post it. It may help.
No wounds

12) Describe the housing/bedding in use
From dusk til dawn they are in their coop which is an enclosed space with good quality hemp as their bedding. Using deep litter method building up layers of fresh hemp as they poop and scratch. They did manage to spill the water inside their coop which soaked the hemp which I replaced. Daylight hours are spent mostly outside in a different enclosed space or they have supervised free range.
Last edited: Aug 15, 2020

Look inside his beak for any obstruction, canker or lesions.
Check his crop first thing in the morning to make sure it's empty.
Change in feed can often cause poop have a different appearance. I would just keep watch on that for a few days.

How much ventilation does your coop have? Photos?

Wyorp Rock said:
Look inside his beak for any obstruction, canker or lesions.
Check his crop first thing in the morning to make sure it's empty.
Change in feed can often cause poop have a different appearance. I would just keep watch on that for a few days.

How much ventilation does your coop have? Photos?
Click to expand...

Thank you for your response. Good questions and here goes. I looked inside the mouth and everything looked normal. I did compare it with the others and again nothing worth mentioning. He did open wide for an awesome pic, but wasn't impressed.

I check all their crops regularly and all are well fed before bed and wake up to almost empty crops. His right now, as he was settling to sleep, was the size of a golf ball, not hard but most certainly full.

Feed I'm monitoring but I think it should be ok.

The coop is a custom design. Ventilation was top of the list when I made it and have added plenty. Design and some of the build are here in this thread. I'm constantly monitoring it and adapting the design to the environment and needs.

Inside of beak looks good. No, he's not impressed LOL

Waking up to Almost empty crops? Crops should be empty/flat first thing in the morning before eating/drinking. Crop issues can cause some coughing/snicking - I would re-check again in the morning, if not empty, then I would begin treating.

I should have clarified, when I wake up is way after their wakeup time. Food is usually in the coop as they have only recently started spending days outside, however for tonight I've removed food and water from the coop. Will wake up bright and early and check all the crops before feeding them anything.

Wyorp Rock said:
Crops should be empty/flat first thing in the morning before eating/drinking.
Click to expand...

ok so first thing I checked all of them before bringing the food and drink in. The Brahma roo's crop (plus the rest) was completely flat/empty.

Crop empty is good.
Is he still sneezing? Can you get a video of that so we can hear him? Upload the video to YouTube and provide a link.

What does the new food look like, did you smell it?And is one of the main ingredients corn?

When did you last deworm them?

Wyorp Rock said:
Crop empty is good.
Is he still sneezing? Can you get a video of that so we can hear him? Upload the video to YouTube and provide a link.
Click to expand...

sorry was working around the chicks all day and tried to record but of course, every time I wasn't recording is when it would sneeze. Will try again tomorrow, but thankfully the sneezing is not as much as it was.


LaFleche said:
What does the new food look like, did you smell it? And is one of the main ingredients corn?
Click to expand...

No corn. Newer feed (although it's now some 2 weeks old) has very small pellets rather than the old one being crumbs bordering powder. Smells like it should I guess, I wouldn't know any better, but nothing unusual from what I could tell.

Also, they are now just over 8 weeks so I believe I need to change the feed again?


LaFleche said:
When did you last deworm them?
Click to expand...

Never...should that be a priority? and how often?

uktech said:
Never...should that be a priority? and how often?
Click to expand...

De-worming will not harm them in any way and in doing so they will not be compromised by the damage a worm infestation would cause to their digestive and nervous system.

The new feed does contain corn/maize which can lead to yellowish droppings.

Genetically modified soya can also lead to digestive disorders. Some breeds are more sensitive to it than others.

Sneezing & Coughing and now a buggery nose on my Roo
2