swelling on foot, but I don't think it's bumblefoot..

There are three small pokes in the bottom.. made worse by my "excavations"

Is this just funky looking bumblefoot? the top of her foot looks fine except for the swelling, and I don't see any indication of a plug. 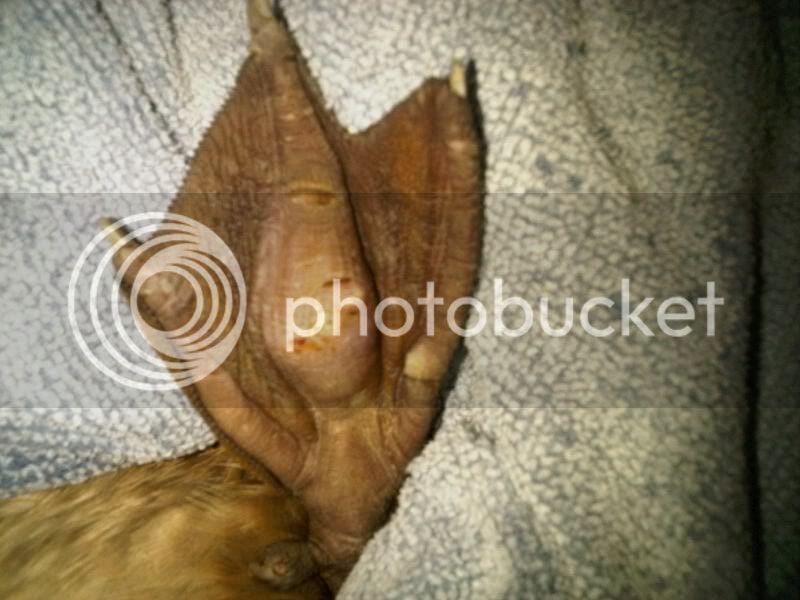 Thanks in advance for any help.. I'm currently treating a chicken with bumblefoot, so if that's what this is, then it's just add another to the routine, but I don't want to treat her for that if thats not what this is.

Kinda looks like the beginnings of Bumblefoot. I'd treat for that. There are several threads on treating Bumblefoot. 8 of my ducks had it this past Winter.

There is definitely something wrong with the foot. I would also agree that it's most likely the starts of bumblefoot. Bumblefoot seems to come up in all sorts of sizes and degree of "bad-looking". You can't always see or feel the plug. My duck ming mei had a little bump with a tiny scab, with barely any puss plug but had to have it surgically removed by my vet because it was making her incapable of walking.

Thanks for the replies, I'll start the soaks and bandages and penicillin.. if I can get her to NOT jerk around while I'm doing it

She's not exactly tame, but she's tamer than the ones we got from some random pond where the owners just up and left them.

Does the hanging them upside down have the same effect as it does chickens? What about for thug ducks like mine that run in gangs and smoke little joints and wear leather jackets?

my wild mallard has the exact same swelling around his middle toe, I've been washing it but no change

I had something very similar to this on my cochin hen. It never really did look like a bumble as described everywhere.. But I still treated as one sorta.. we trimmed the feathers as much as possible, lanced it with a large gauge needle, soaked it in nolvasan solution (which stained her beautiful white feathers BLUE--3 weeks before a show!! she was DQ as "not recognized color" hahahah

) then kept her foot wrapped all day every day for 5 days, then wrapped only at night, and kept her in the tractor on grass--no dirt.. Also did oral baytril tabs. Sooo, I guess I don't know what really healed the alien away on her foot.. probably the antibiotics.

I guess my point is -- since you are already doing most of that stuff anyway -- is we had the the same sorta funny bumblefoot that's not quite the real deal...

and I can't seem to find the one of her miraculously healed paw... hmm .. anyway. you'd never know it happened. weird chicken!
Last edited by a moderator: Jun 3, 2010

is there anywhere to get antibotics w/o a vet visit?

you could try the feed store.. they will probably have penicillin...

A human pharmacy (OTC) or eBay will have StaphASeptic gel (antibiotic for Staph). Any pharmacy has Bacitracin ointment. Amazon.com or Peter Brown has Cephalexin (fish-flex) oral 250mg capsules, one twice daily x 14 days.

Apr 15, 2022
Fowl is Fair
F
M
Can anyone tell me whether this looks like bumblefoot
2