Too Many Roosters... Need to Downsize

I have 15 silver laced wyandottes (11 pullets, and 4 cockerels) and 1 Dominique cockerel.
(((Side note to clarify: It was a McMurray order of 15 with one free "exotic". I ordered 12 females, and 3 males. Ended up getting 12 females, 4 males, and 1 Dominique male. I was expecting to lose a few in shipping, luckily I didn't, but I did lose 1 pullet about a week after I received them.)))

So here we are now... with TOO many cockerels.
I need to get rid of a couple, but I'm not sure how to go about it. I want to keep my Dominique, he's pretty awesome. But I have 4 big SLW boys to pick from. Also, I'd eventually like to breed and incubate.
With 11 pullets, should I keep 1 or 2 cockerels? How do I pick which ones to keep? I know there are certain breed characteristics to look for, but I'm still a little confused. We have 1 dominant cockerel that is 'numero uno', should I just keep him and get rid of the rest?

Any advice on choosing the "pick of the litter"?

What are your goals when you hatch? When you hatch are you OK with mixed breed chickens or do you want them to all be be SLW's? Are you going to be raising them for meat, size and early maturity might be a goal. If you will sell the chicks it might be easier if they are all SLW instead of mixed. As best you can (it will not be easy) you need to pick the one(s) that best meet your goals.

I suggest people keep as few males as they can and still meet their goals. That's not because you are guaranteed problems with more roosters but because problems are more likely the more roosters you keep or you may have to work harder to keep them. Since you plan to hatch you will need at least one. A lot of the chicks you hatch will be male, what will you do with them?

How much room do you have? The more room you have the more likely you can keep multiple roosters together. The tighter the space the more likely you will have problems, some serious. The ideal situation for multiple roosters is that they can get far enough away from each other that they can't see each other. Some people do successfully keep multiple roosters in less space but there are more risks. I do not believe in magic ratios for the number of hens for each rooster. Experience has taught me better. You can have the same problems with a high or low ratio.

Another option to keeping more roosters, especially if space is tight, is to create a bachelor pad. Keeping the males separated from the females gives them a lot less to fight about. It is a common solution. While there are ways to keep multiple roosters and without knowing how much room you have or your goals I'd think keeping one may be the right choice for you. Certainly no more than two.

Because of the social interaction in the flock it is challenging to to choose which cockerel is the one that best matches your goals if behaviors are involved. The dominant male suppressed the behaviors of the less dominant so you cannot see their true nature. The competition from the other males can affect him too. A male may act totally differently toward the females and maybe even you and your family if he is promoted to the head rooster position by removing the other males.

Another challenge is that while they are immature the hormones are usually in charge. The cockerels can get pretty wild. The pullets are immature also and don't know how to play their part. Generally when they both mature things settle down quite a bit but it can get petty wild until they do mature. Sometimes the adolescent phase isn't too bad, especially if you have a lot of room, but sometimes it is really wild. Looking at that photo you should be seeing some effects of adolescence by now.

On the other hand it is possible for a chicken to flip when they mature. It is really rare for a female to do that but it's possible. She may become a brute toward other hens. Males are more likely to do that. Again it is kind of rare for a male to become a brute toward the hens as they all mature, usually they mellow out. But his position as flock protector can change him from being a gentle non-threatening rooster toward humans to becoming human aggressive. There are several different theories on how you should or should not treat a cockerel as he is maturing to avoid this potential problem, I have some opinions of my own. Sometimes they work, sometimes they don't.

I tend to select the larger earlier maturing cockerels to keep, but I raise them for meat. In my opinion the early maturing ones tend to have the personality to win over the females by his magnificence and self-confidence. The ones with less self-confidence tend to rely more on brute force to show their dominance over the hens. I also think the more insecure are more likely to become human aggressive just because they are more nervous. I have eaten some early maturing large cockerels because I thought they were too aggressive or brutal. It's not always a clear cut decision. Sometimes I get it wrong.

None of this always holds true, you can find plenty of exceptions to anything I said. About the only think consistent about chickens and their behaviors is their inconsistency. In my opinion picking a cockerel based on behaviors is a crap shoot, both because of the social interactions with other males and females plus he just hasn't matured yet. In your case the pullets haven't matured either.

I think your best bet is to decide on your goals for the cockerel(s) and any chicks that hatch and base your decision on that. You won't really know how well you chose for another 6 months or a year.

Good luck, it can be a stressful decision. I struggle with it.

Ridgerunner said:
What are your goals when you hatch?
Click to expand...

Ideally, my plan is to build a smaller "side" coop to separate the hen/rooster that I'd like to get eggs from and hatch.


Ridgerunner said:
How much room do you have?
Click to expand... 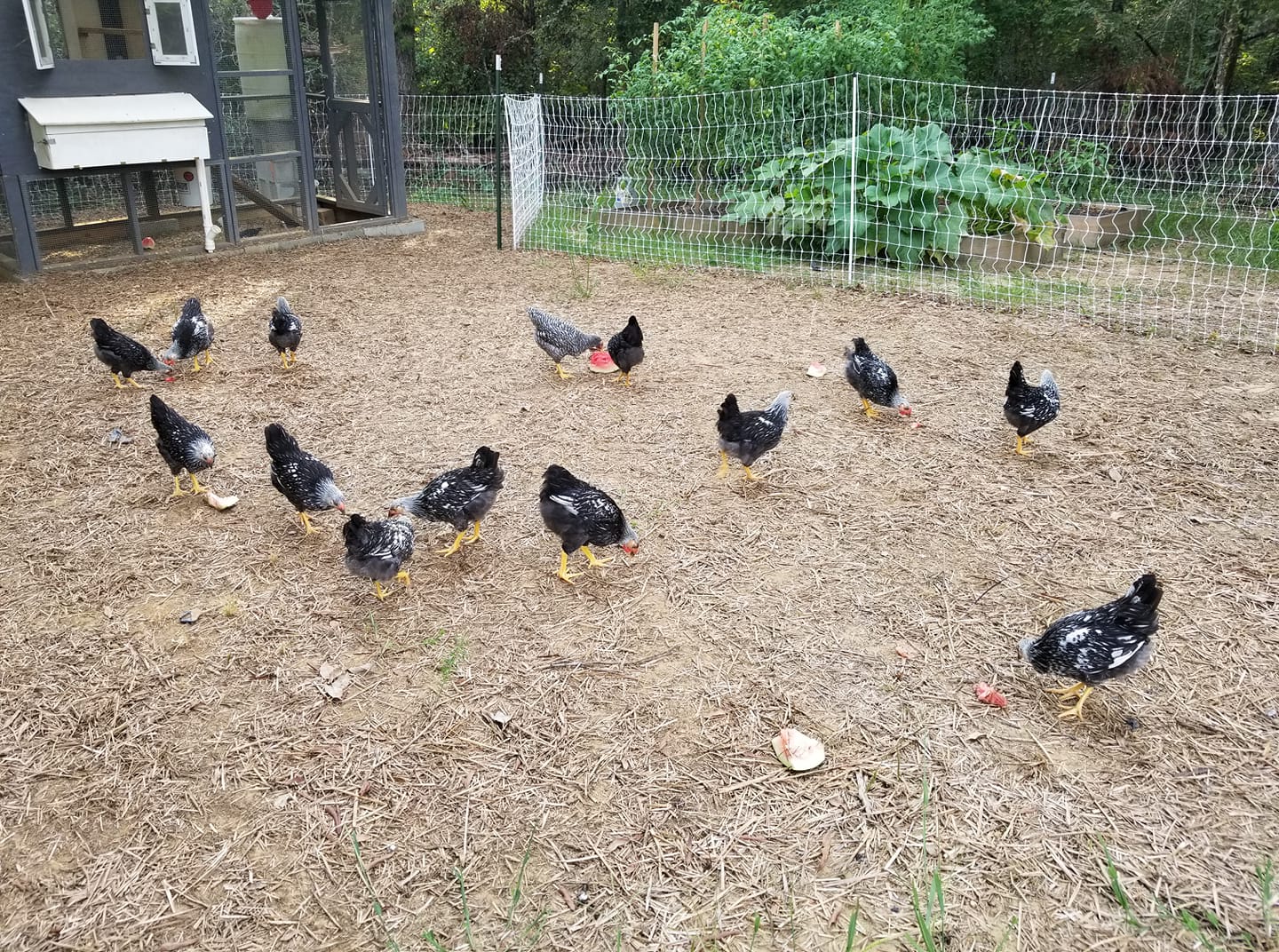 Ridgerunner said:
A male may act totally differently toward the females and maybe even you and your family if he is promoted to the head rooster position by removing the other males.
Click to expand...

This is absolutely true, and I've never thought about that.


Ridgerunner said:
Looking at that photo you should be seeing some effects of adolescence by now.
Click to expand...

They're 16 weeks old now. That picture was from about a month ago.

This is all great information, and I appreciate your input very much. Apparently, this will never be an easy decision.

Actually pick the most well behaved Cockerel. Can be hard with having more than one.
Butchering is the quickest way to dispatch unwanted Cockerels.

People often disregard the standards of a breed, but they are a good place to start when looking at a rooster for breeding. If you are planning on a long term breeding project, any flaw tends to get magnified over time. Start with the best rooster you can.

However, on the other hand, you are talking years of breeding and raising chicks. If this is just a hobby, you can play around and see what you like.

11 hens to me is for one rooster. Currently myself, I have 1 rooster with 9 full grown birds, 4 pullets and 1 cockerel. Next summer the plan is to cull the old rooster and keep the new rooster.... but I am not sure if I will like him or not.

Good roosters are rather easy to come by.

HoneysuckleHomestead said:
I have a 5'x10' coop with a large fenced-in run.
Click to expand...

Looks like the coop itself, where they roost/sleep is about 5x5....and the attached run is 5x10??

If you want to breed SLW chicks, I'd keep 1 SLW cockerel and get rid of the rest of the males. It's a tough call. Last year I had 3 of the breed I wanted for flock cock, took me weeks to decide that the biggest meatiest bird was the best choice, for meatier cockerels to put in the freezer...was a good decision.

Choosing by behaviors can be inaccurate, IMO, cause once the other males are gone that's when you see your chosen one's real disposition. It took a couple months for me and the chosen one to come to terms...but we worked it out and he is now a 'good bird'.

How do you advertise cockerels and roosters?
2 3

Help, my teenage cockerel is out of control!
2