I've seen that video haha. So funny to see them swim.

They can just about stand so I guess they can swim a bit although I haven't seen it.

Emus pair up after year 2 correct? I've a year to find another emu so my 2 I've now don't pair up.

When do Emu chick feathers turn lighter in colour? My Emus are getting so big but seem to only grow darker feathers :')

'Emus pair up after year 2 correct? I've a year to find another emu so my 2 I've now don't pair up.'

The Literature on Emoooz, s., is poor. No, really: it is!

So, one reads of captive -- farmed -- emus mating at under two years. Maybe they have nothing more interesting to do.

But for wild emus (my rothschildis), it goes like this:

life happens in seasonal cycles. For example, Dads may parent for one or almost two years. And you can mark the very last of 'black-head-ness' in 'chicks' right up to about 20 months.

So, for a chick to mate at the age of (just under) two, it would have to be beginning the process at only about sixteen months of age. Nuh.

How it goes, though, is:

all (wild) emus have their birthday on the first of spring (I invented this notion!) They are physically mature at this age, I think; but I've written elsewhere to the effect that wild emus are not socially mature for perhaps a year or more afterwards.

Than, halfway through that third year, they may or may not throw their hat in the ring. (This is a thing we actually have pretty good data on.) And if they fail that first year, they'll try the following year.


This photo is a treasure of mine. It shows Limpychick and Tooshtoosh and two others of the orphaned clutch of nine. These 'chicks' are about 20 months. But even though they had the whole house-clearing to themselves, they still sat together like chicks in a clutch. 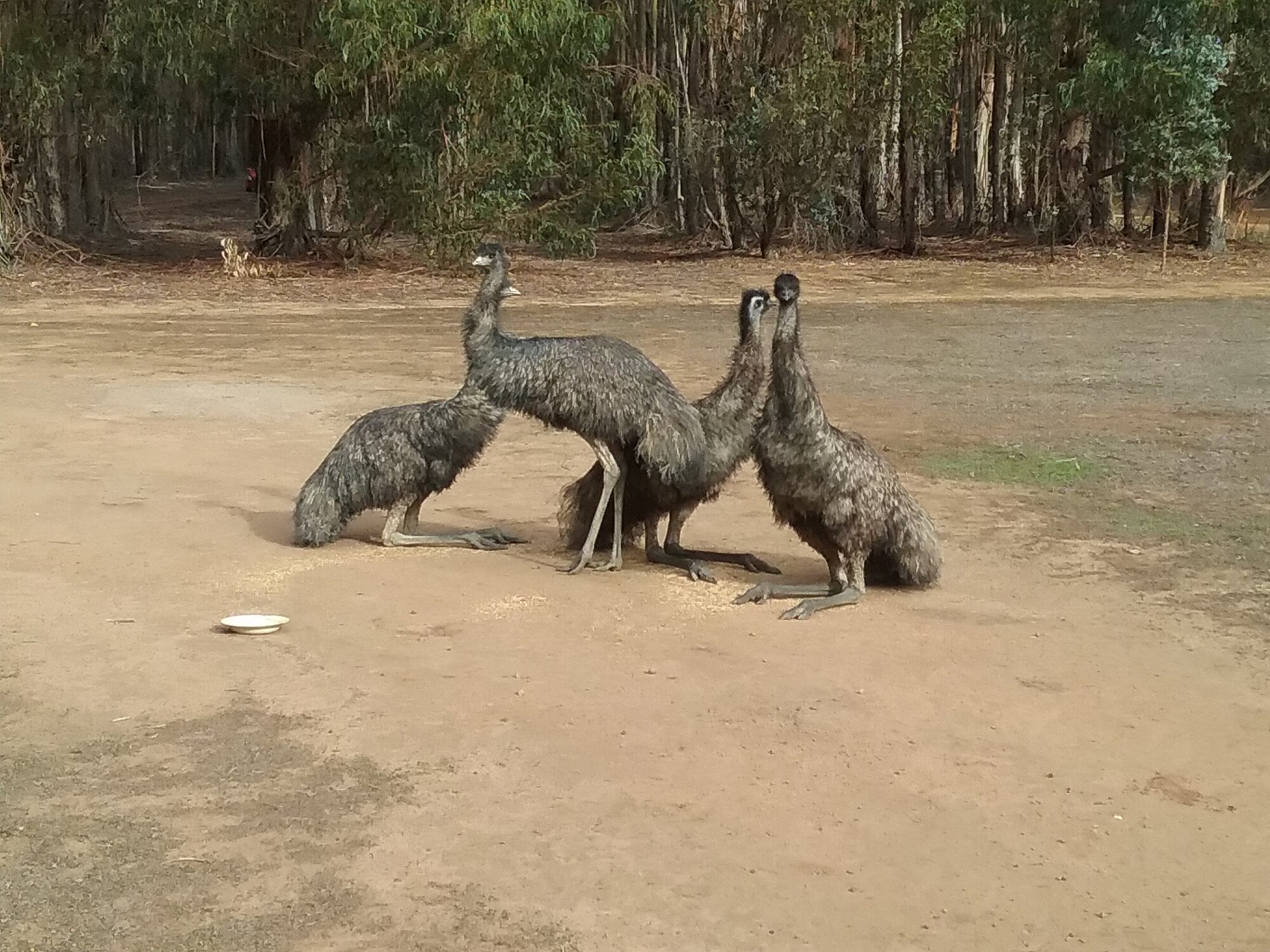 'When do Emu chick feathers turn lighter in colour? My Emus are getting so big but seem to only grow darker feathers :')'

Looking at your latest photos, it's just happening. Watch their toosh feathers and the front end of the 'curtain' of plumage that runs along their sides. That's where you'll see the first 'salt and pepper' coming through. 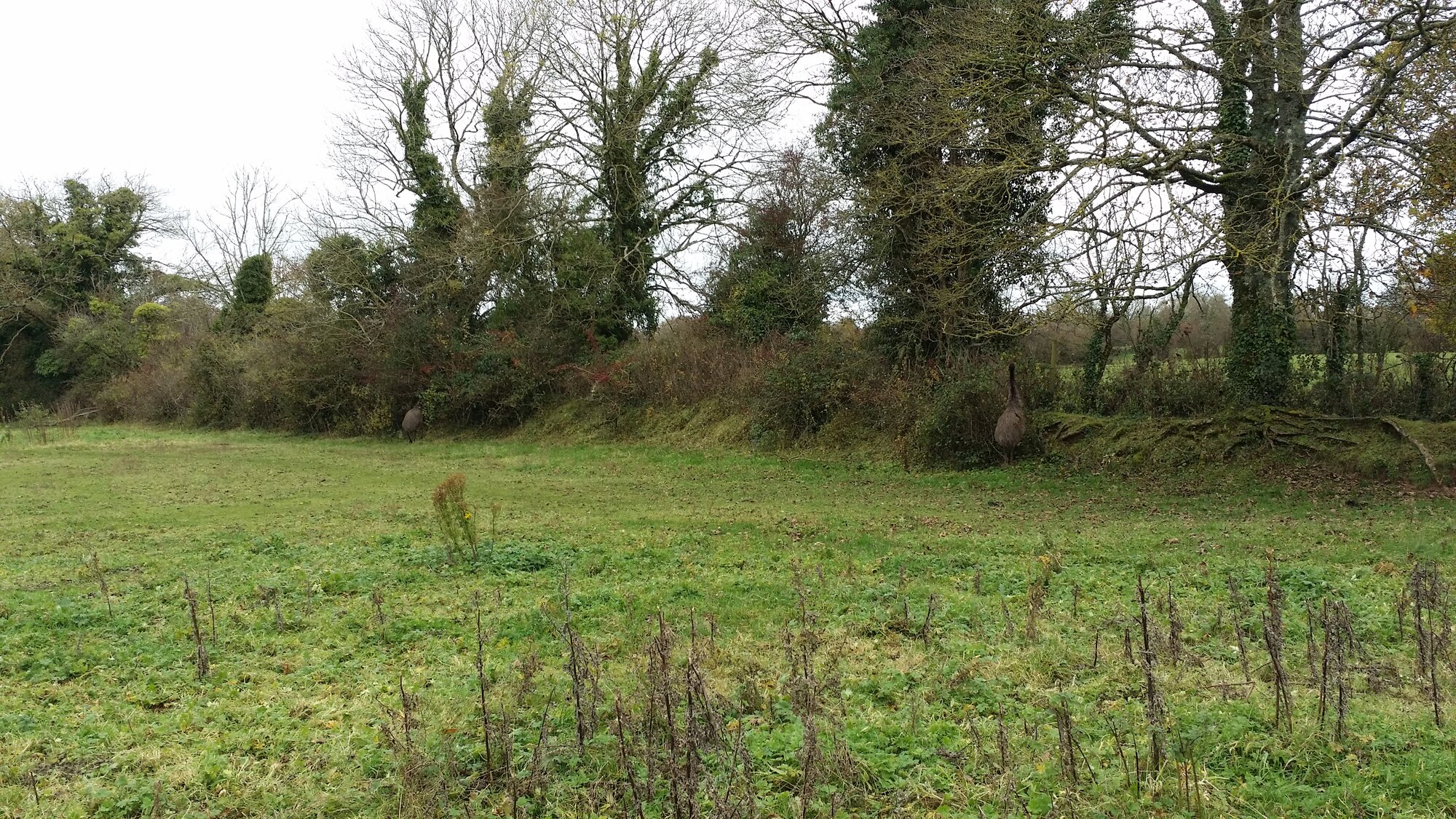 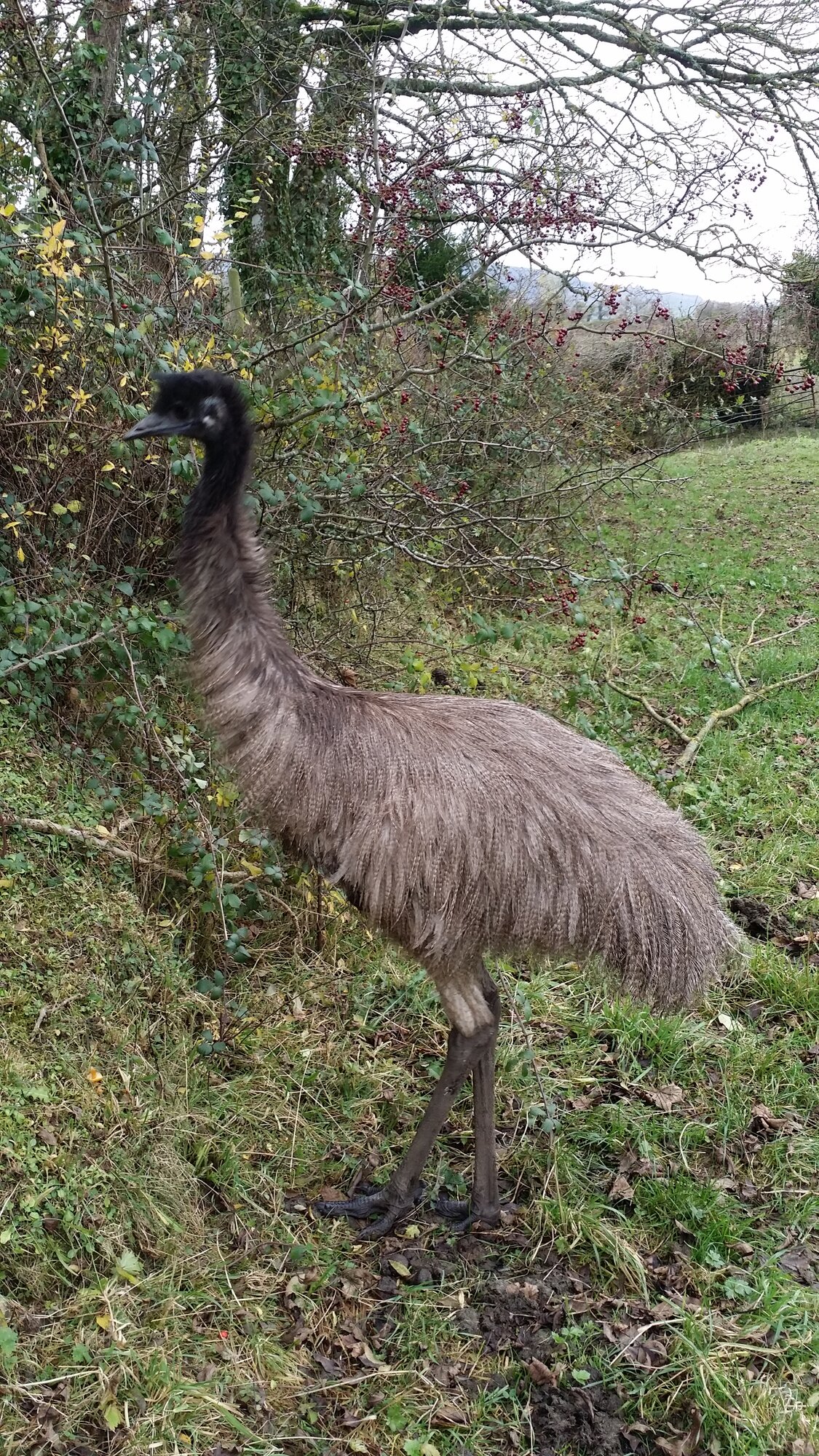 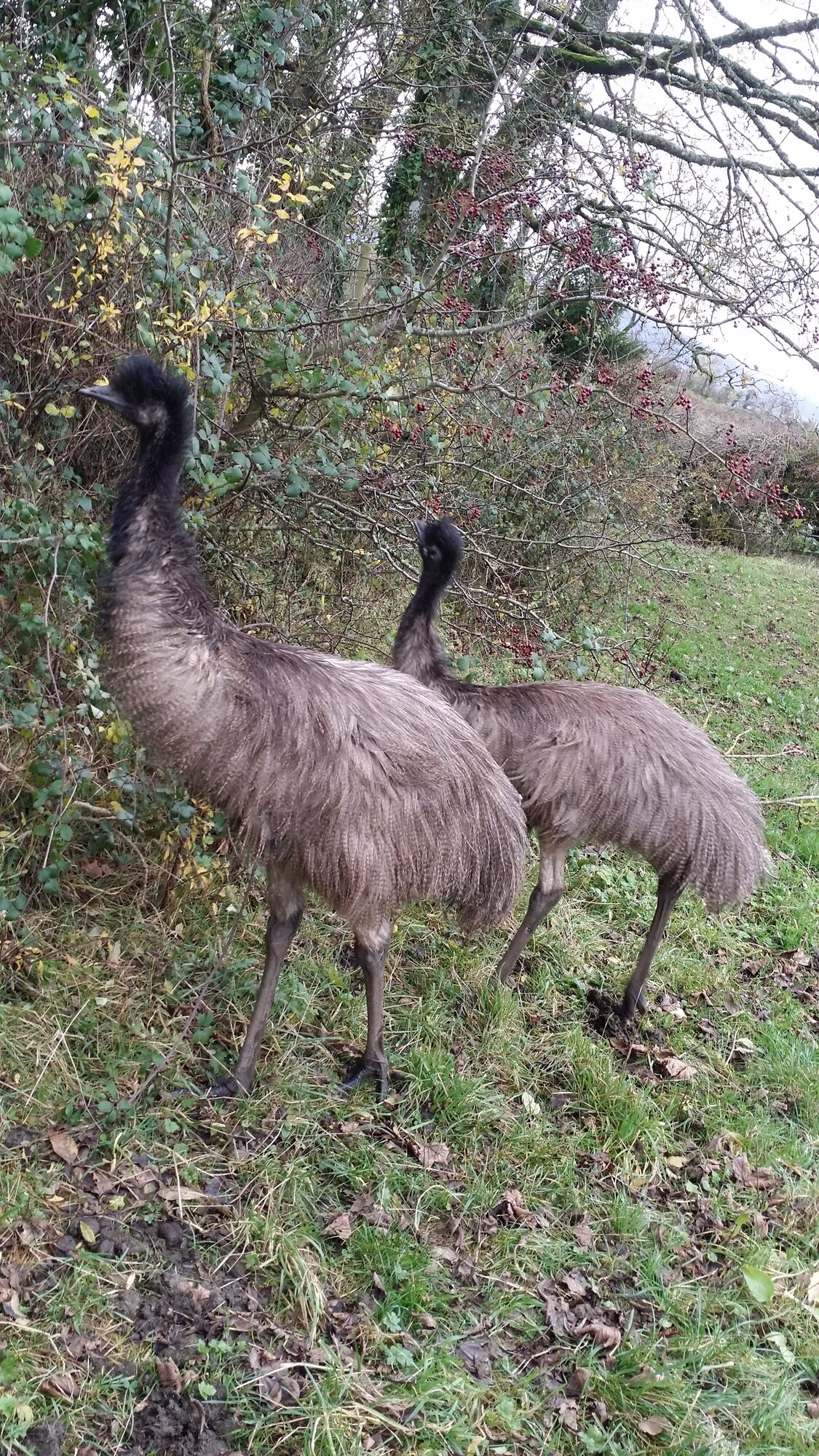 The Female (in front) ^ which we now call Drogon. 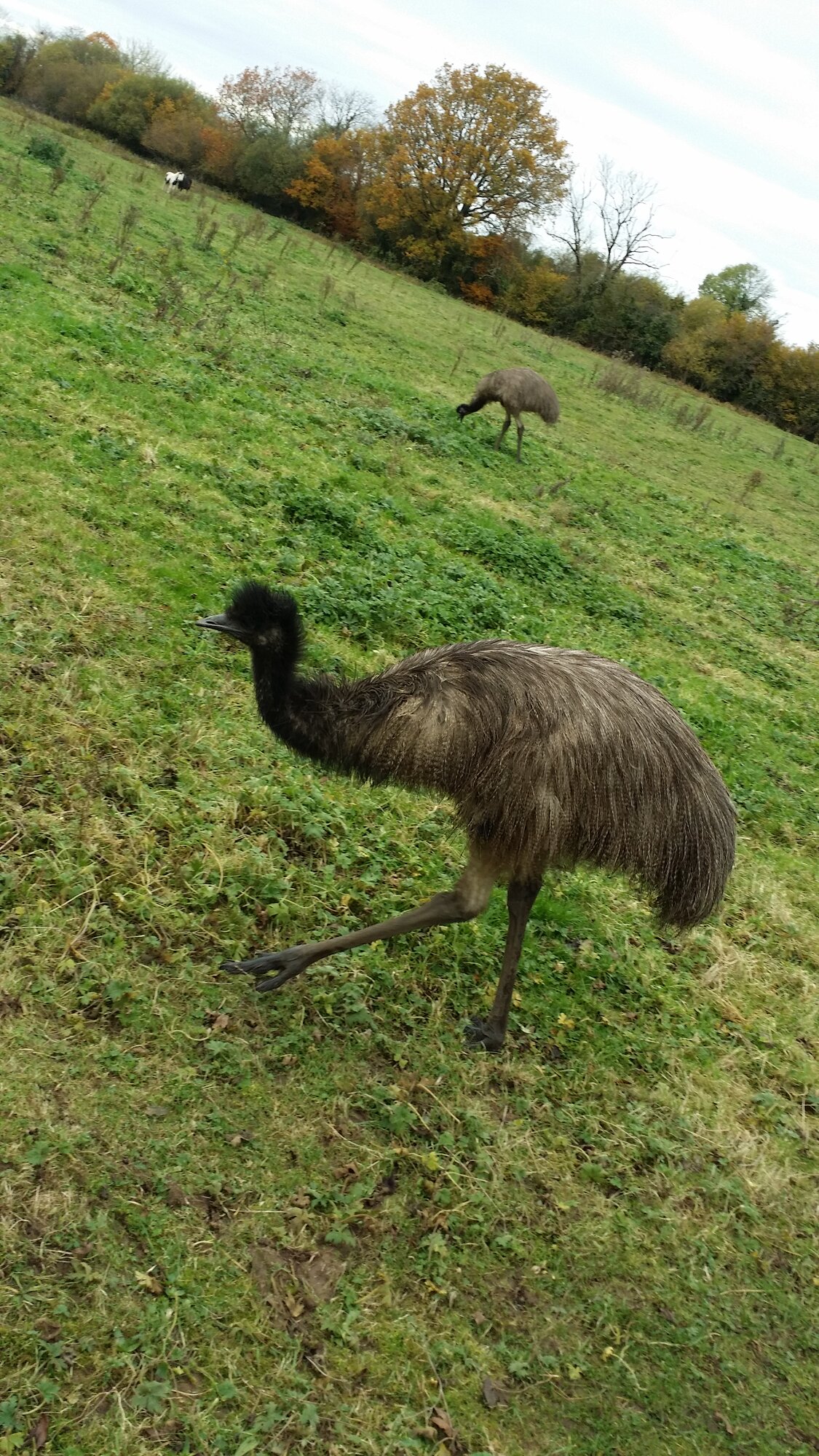 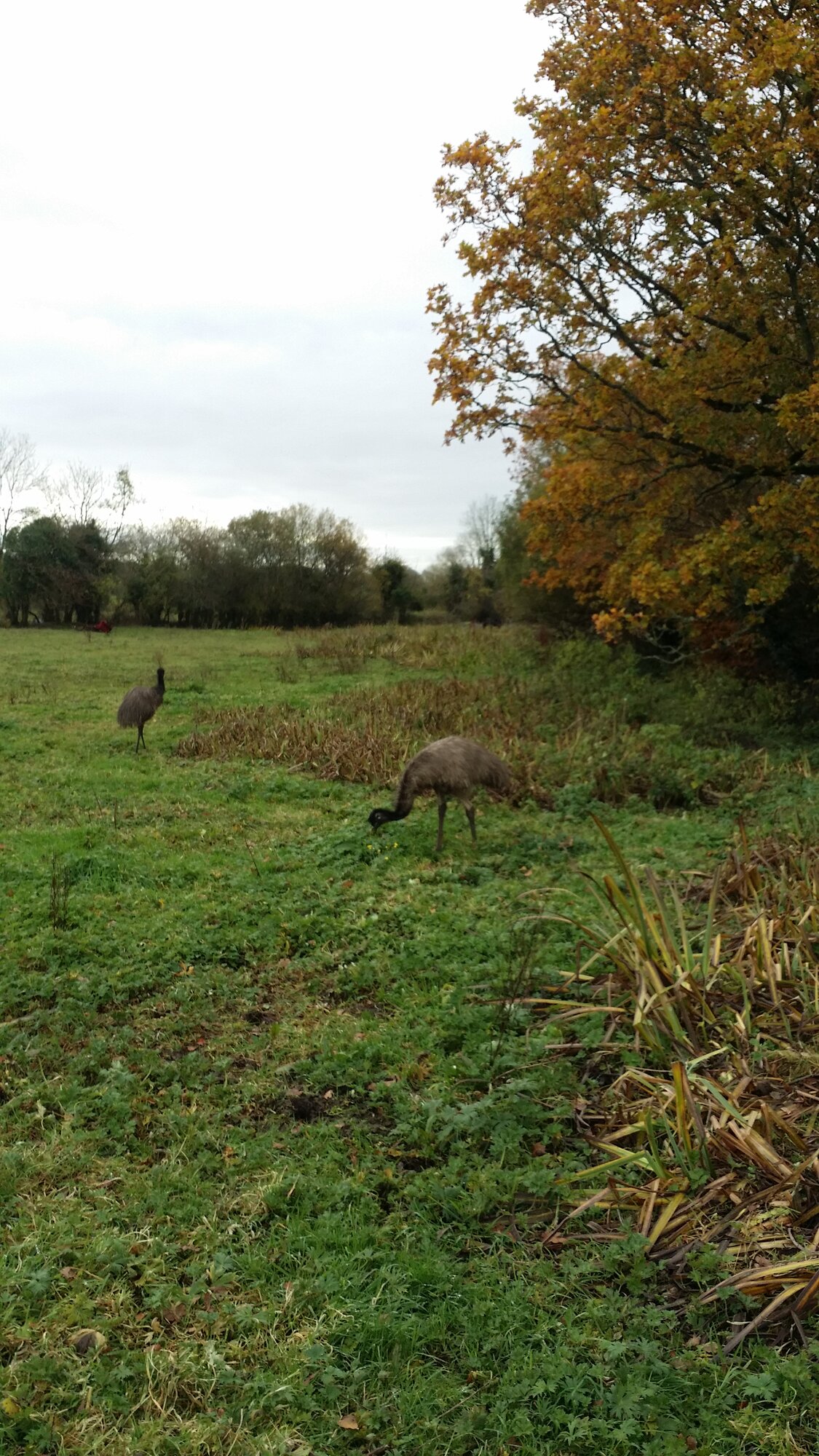 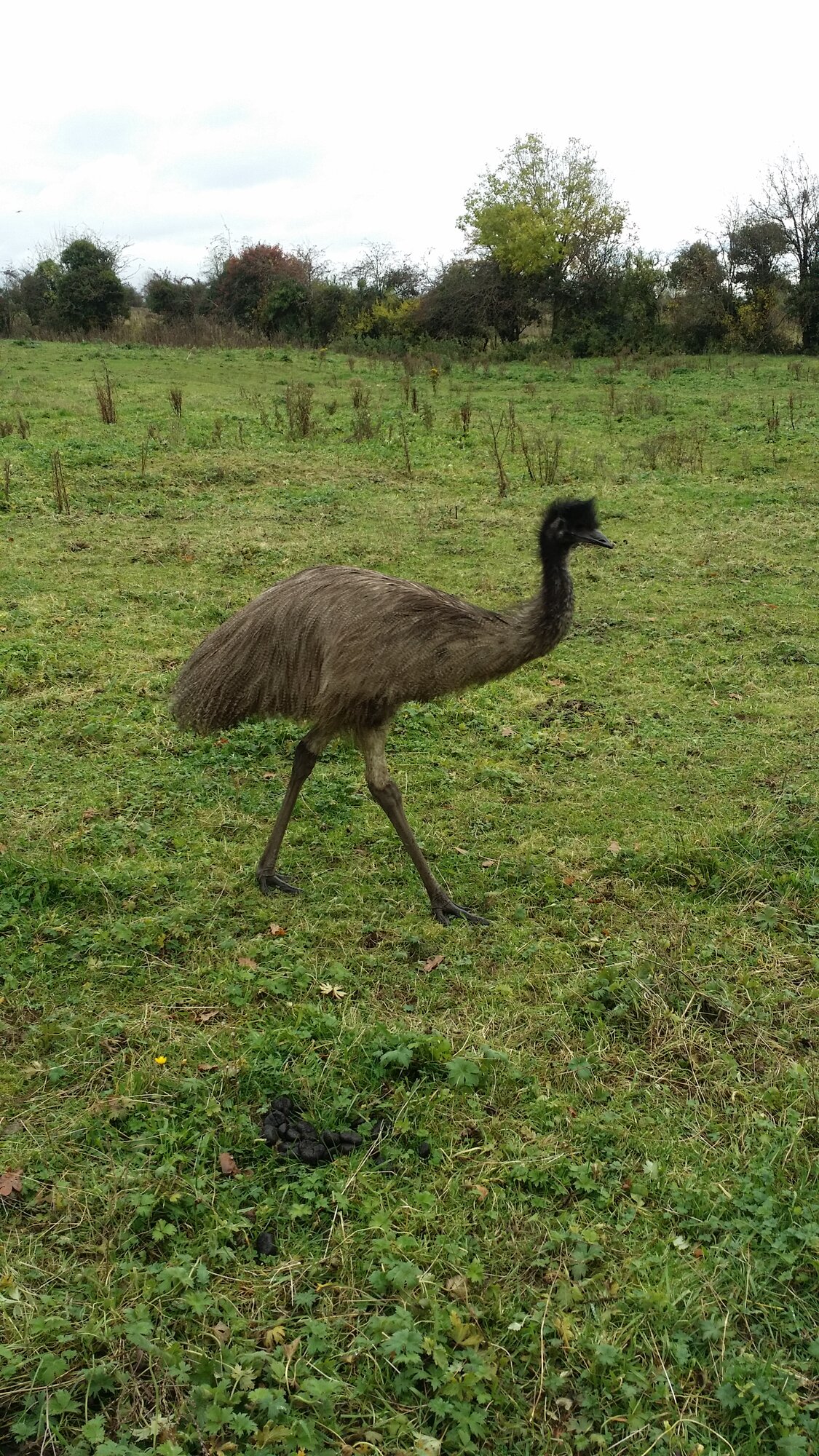 They're growing up fast! 8 months now and the female is noticeably larger.

The male is more slender.

The male is starting to get a very blue head while there's not a touch of blue on the female.

They follow me everywhere I go in the field.

The female Drogon is far more tame than the male and loves head massages!

Her favourite place to get gentle massages is the top of her head and the neck and won't go away unless you stop rubbing her. She's literally a dog:,) 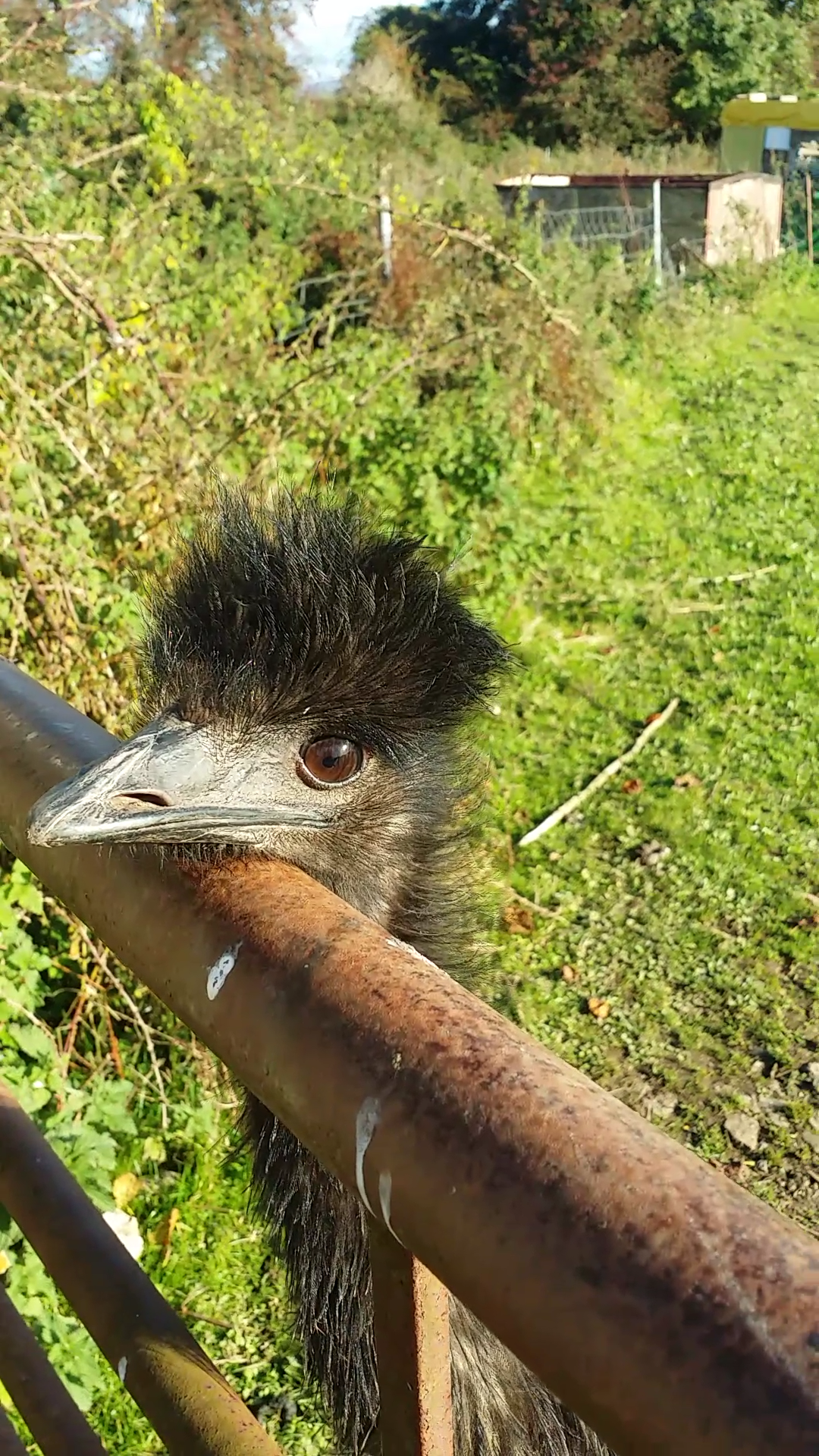 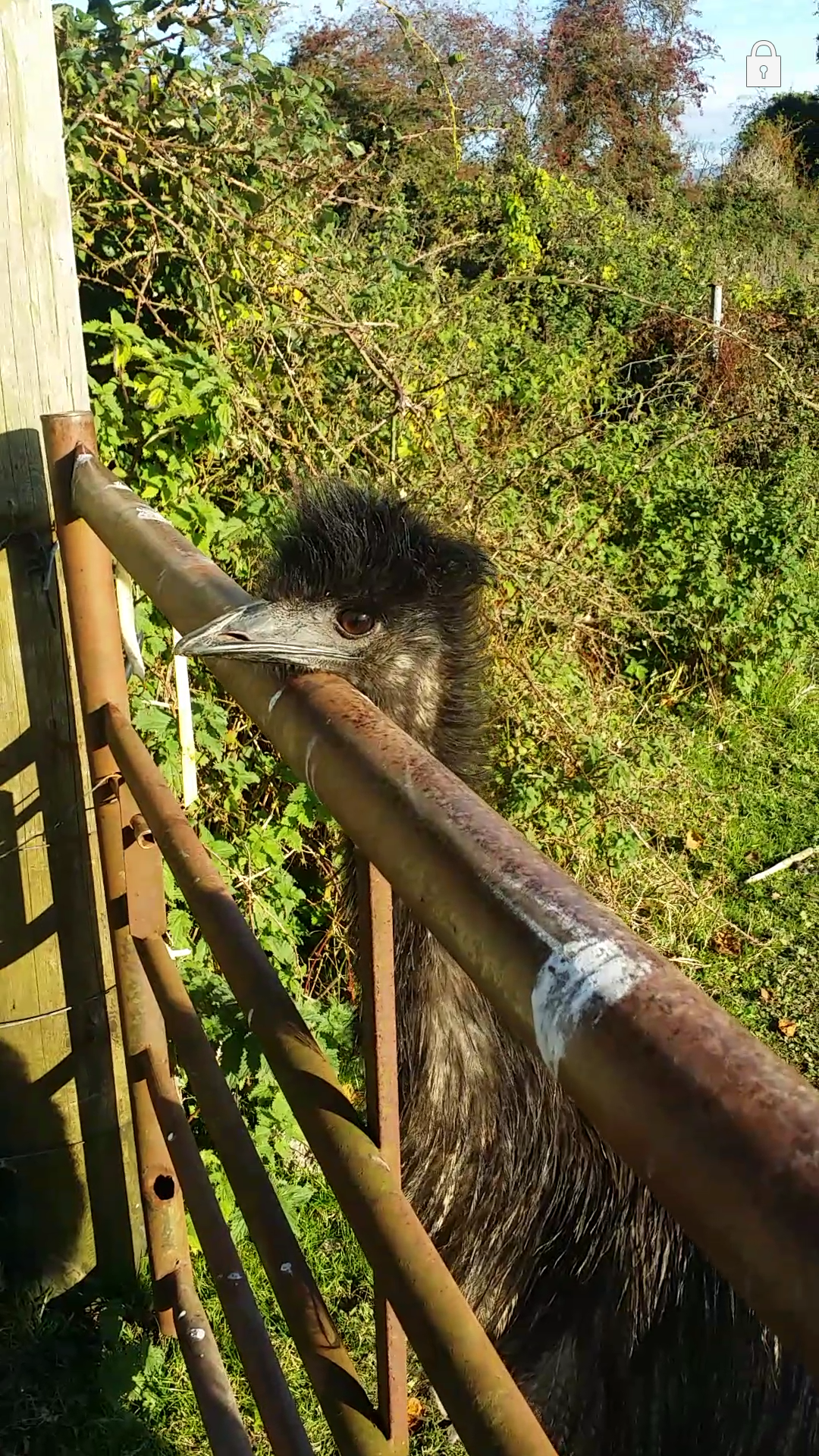 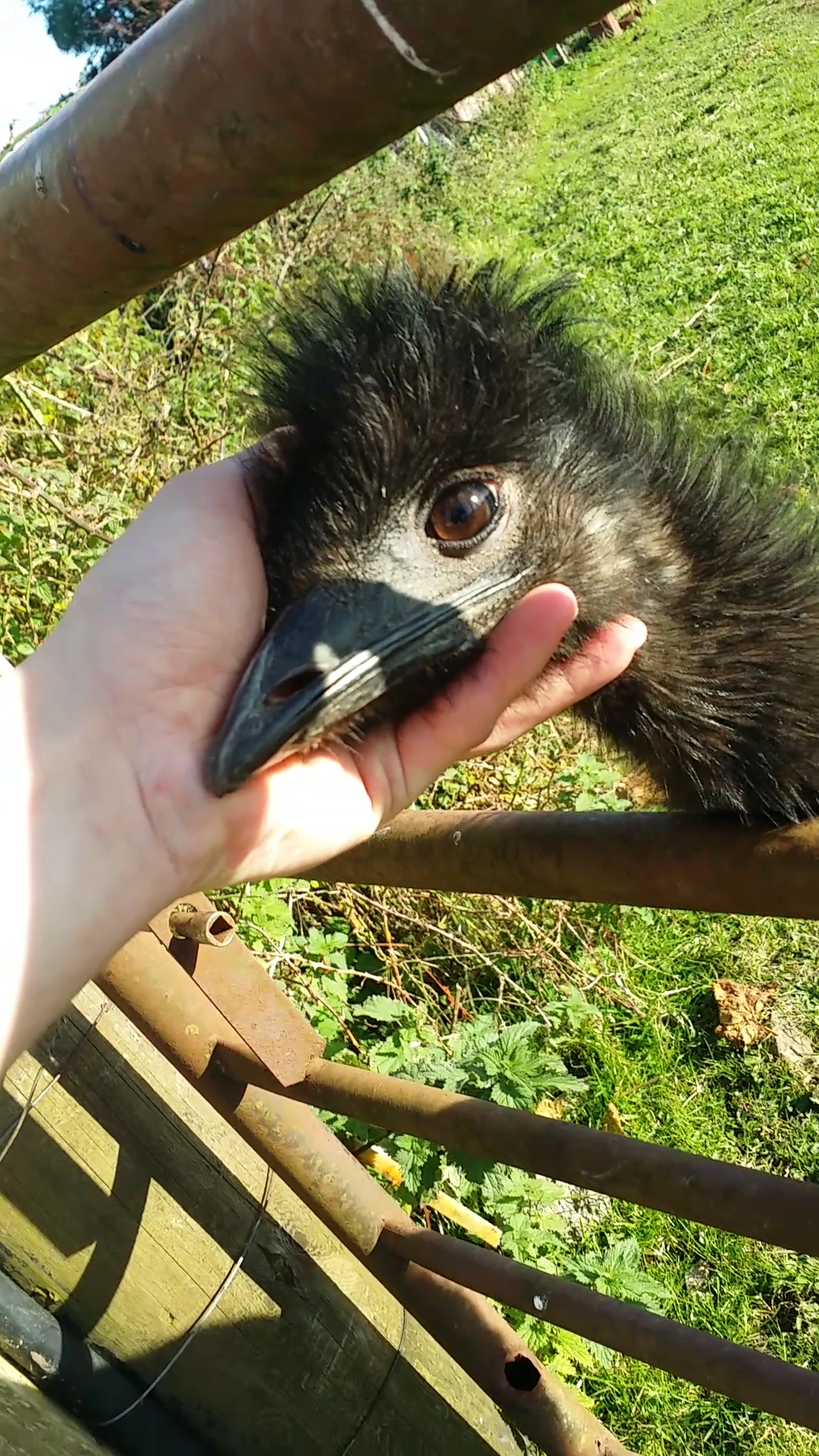 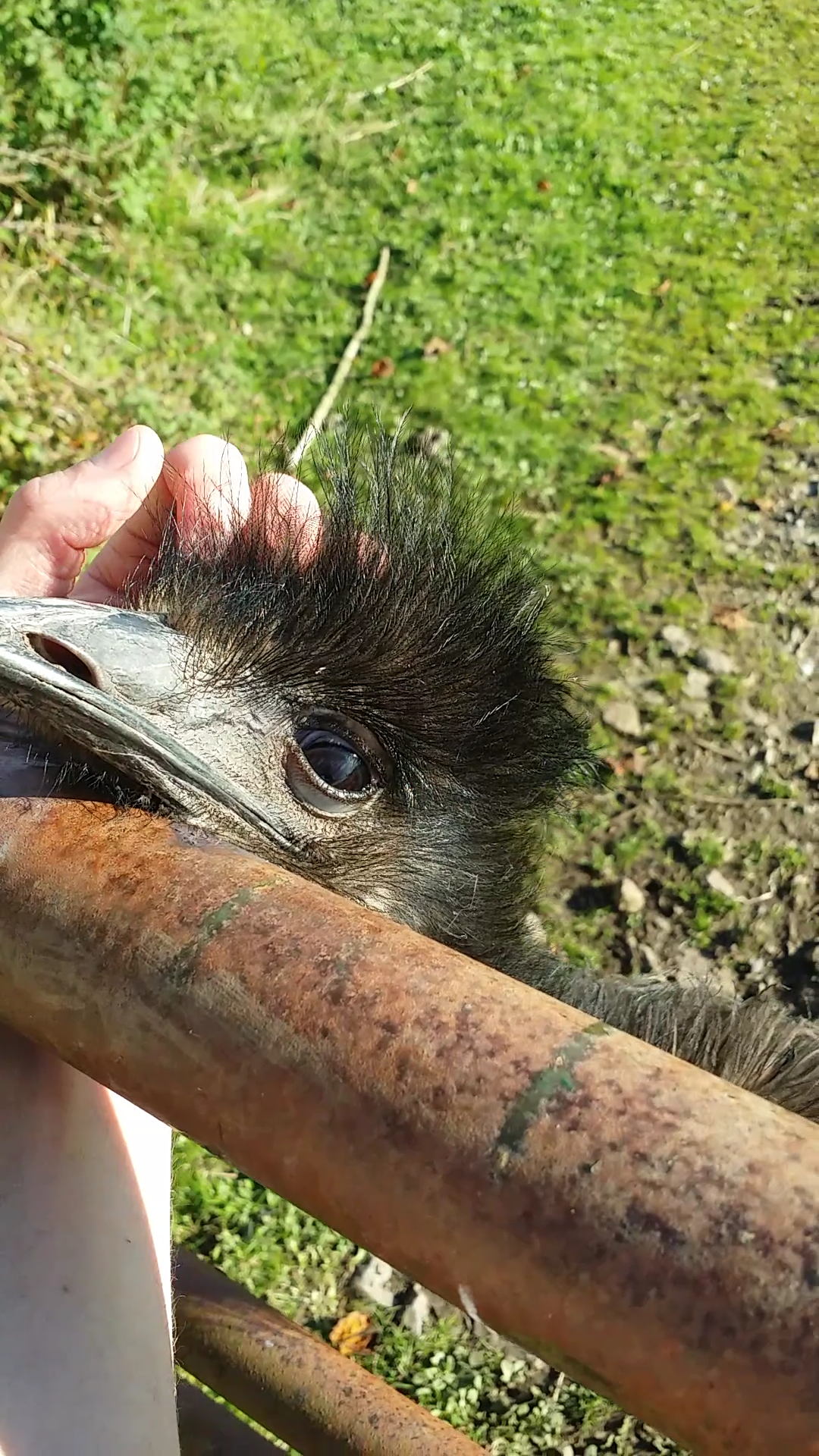 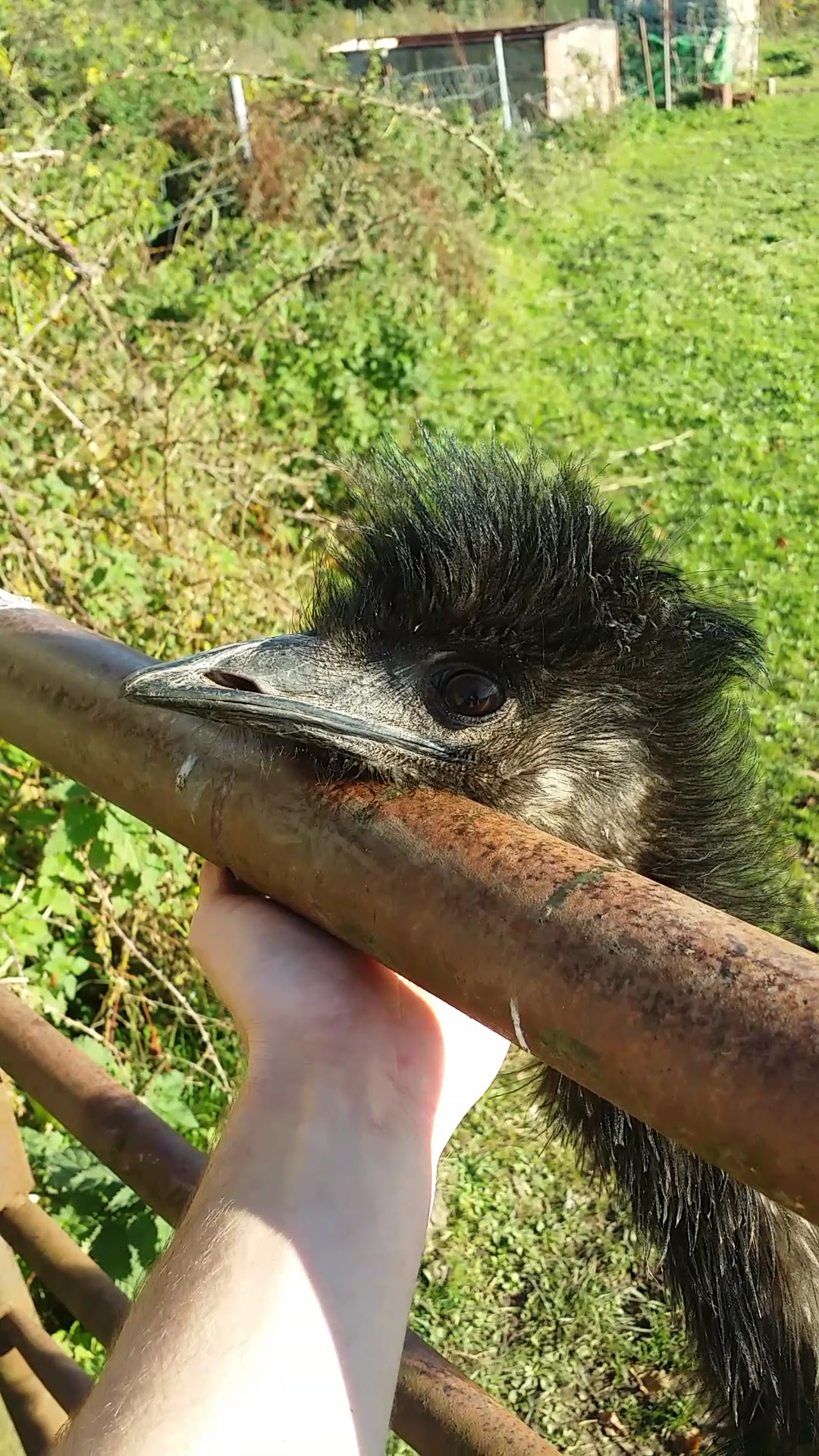 The male rather not be touched and just wants to play with a sock or kick around a football.

They seem to be in truly splendid health!
And the colour-on-the-head thang:

for the rothschildi at least, serv, the 'classical' look is the steely blue skin that you see, with sharply defined feathers around it, on the upper neck and head. But hey, some emus just have other looks, like this magnificent 'dark' male that spent some time here:
Last edited: Nov 6, 2019 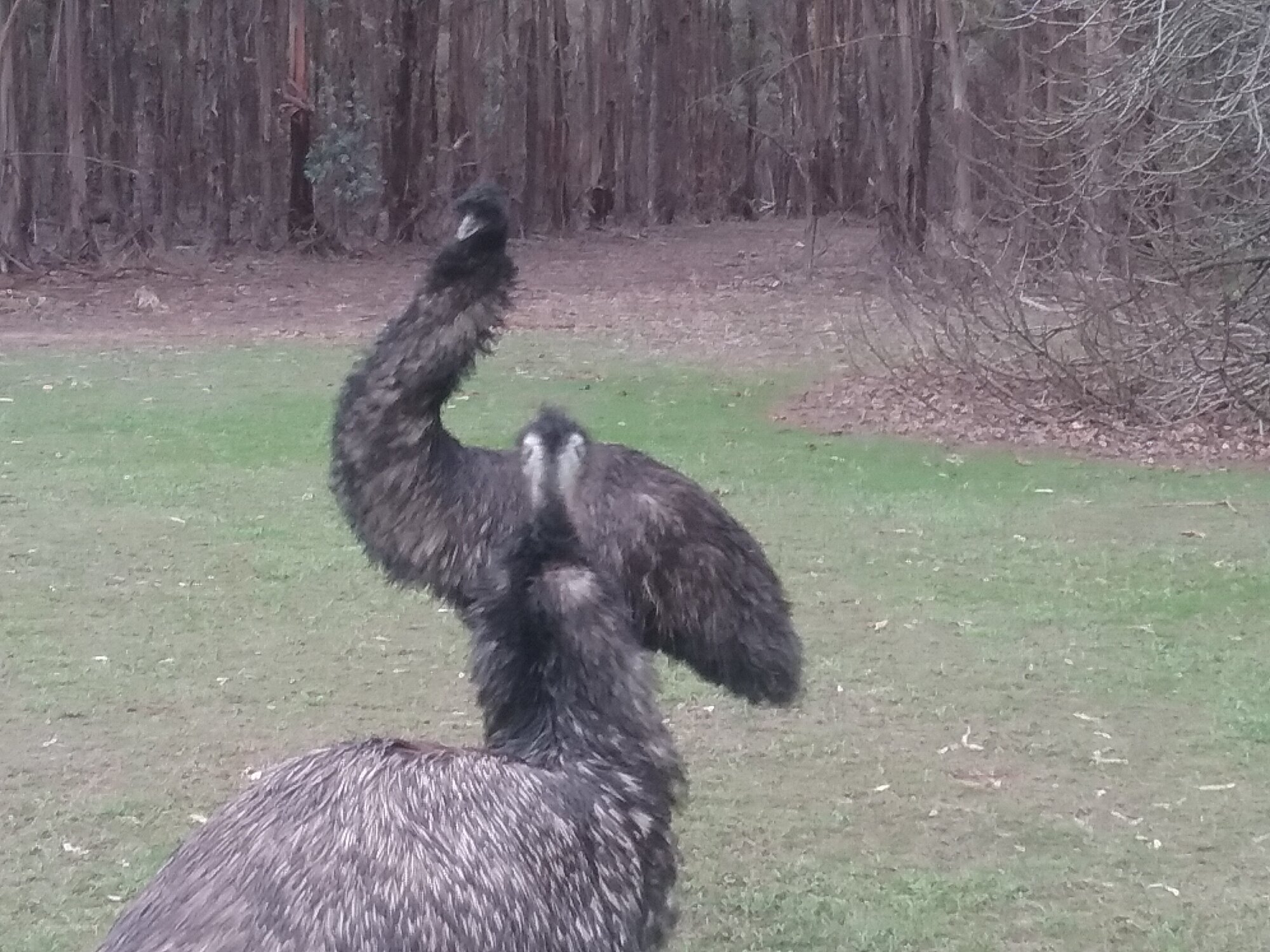 Five birds here at dawn. 'My' two breeding-pairs, and a wild female who poked her nose in, and got run off for her trouble (by Mrs. Tooshtoosh, who was herself run off by Limpychick about five minutes later . . . ).

I'm with them every day and I don't see the growth until I look back at pictures of them months back, they're getting so big and I don't even notice it!

I also lifted them as babies and looking at them now......it's a death wish if I want to pick them up now haha. They're way too big for the car now too.

I also underestimated of how smart they are......they learn from their mistakes straight away just like dogs.

Next year I'm getting 2 more adults from different bloodlines for future breeding. I want the adults to come before my 2 youngsters start getting territorial. 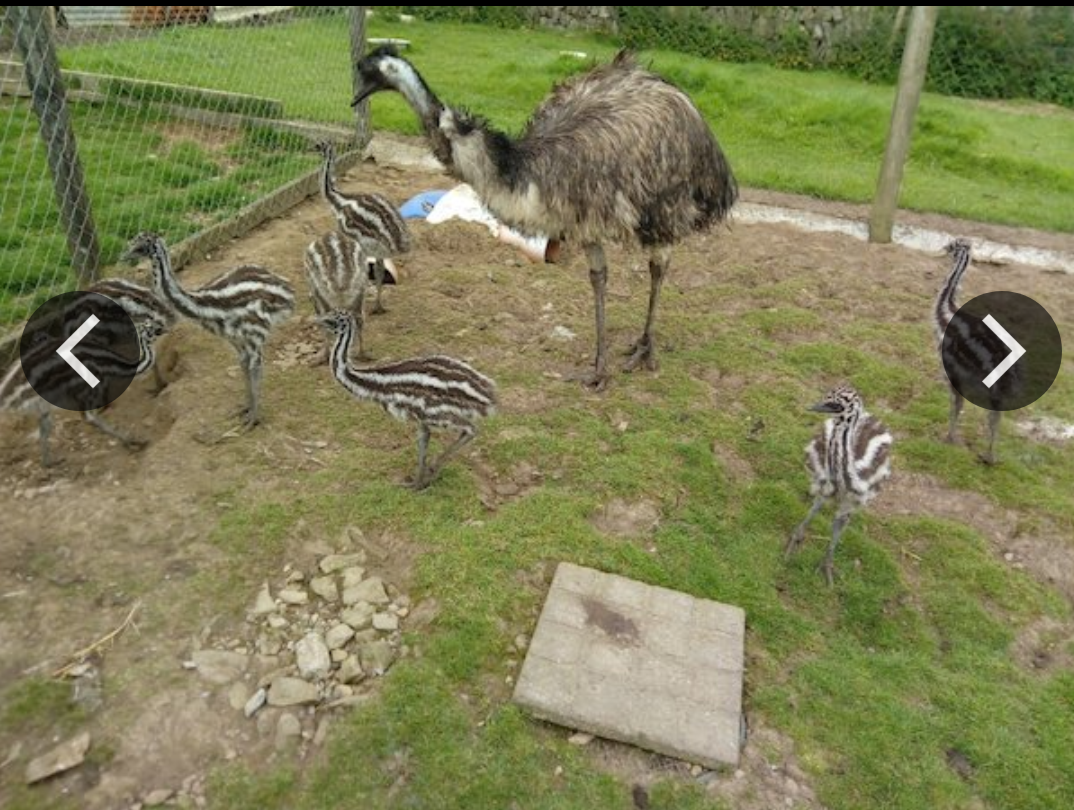 This is a picture of them as babies with their siblings.

This is the ad(photo) I saw before I bought them.

They were also a lot older which the pic didn't show.

I do expect them to look similar as their father (shown in the pic).

Funny to think that 2 of those chicks in the picture are my babies (teenagers).

Will never regret buying them