Hello everyone, I'm building a bigger coop because...surprise, surprise...I have more chickens LOL. Anyway my 1st little Coop initially was up on blocks with a secure pen attached, predator-proof Block 2 feet down around the entire perimeter of oens and coop, as my plan was to let the chickens go underneath of the coop in the hot sun. Then I heard Tales of Woe from others about chickens going underneath to the farthest corner and laying eggs under a building where you can't get to them, so I never did let the chickens go underneath of the coop, I blocked it off with 2 by 6 treated lumber and to provide shade bought them little cozy gazebos in their pens which they absolutely love. Anyway to make a long story short, I have unwittingly provided a wonderful home for mice underneath of the coop, they are not disturbed by any chickens or anything else for that matter because it's entirely blocked off. So here is the Dilemma of what to do, should I let chickens go under the existing coop? It is entirely a predator proof area. Now with the new coop, I only predator-proof the pen portion I did not predator-proof around the entire perimeter of the building. Where the pen is attached to the building it is obviously blocked off and dug down a few feet into the ground so an ornery Fox if he were to go under the building to try to get in that way he would not be able. I am wondering what to do, right now it is entirely open under there any cat or chicken if they are free-ranging can go under the building as they please. I've seen other people put decorative yet functional lattice around the bottoms of sheds and coops to keep skunks out, however no matter what I seem to want to put there, I know mice will find a way in for sure. Any comments and experiences or advise shared would be greatly appreciated. I'm sort of at the point of just leaving it completely open on three sides so that any cats will have free access to mice underneath of the new Coop. The old Coop since I completely Dug down around the entire perimeter so that it is Fox proof, I'm thinking of opening up underneath of the old Coop and letting the chickens go under there, that would scare off the mice wouldn't it? Thank you so much in advance for any advice I greatly appreciate it.
Last edited: Sep 26, 2019

How big is the new coop (and the area underneath it?) I don't allow my chickens to get under my coop since it's extremely low clearance, so the entire underside is blocked off by 1/2" hardware cloth skirted around the coop. In your case, with mice being an issue, I'd probably opt for 1/4" instead.

As long as you can find a way to reach under it to get to a chicken or eggs if needed, then you can leave it open, I'm sure the chickens would enjoy the extra space and the shade it provides.

Mine go under part of the coop, I fenced it off 4' back so I don't have to crawl too far under there, ever.

I have 1/2" hardware cloth down from my coop and out to make an apron. Here's a pic of the back side, I have it all the way around my coop, even on the run side. 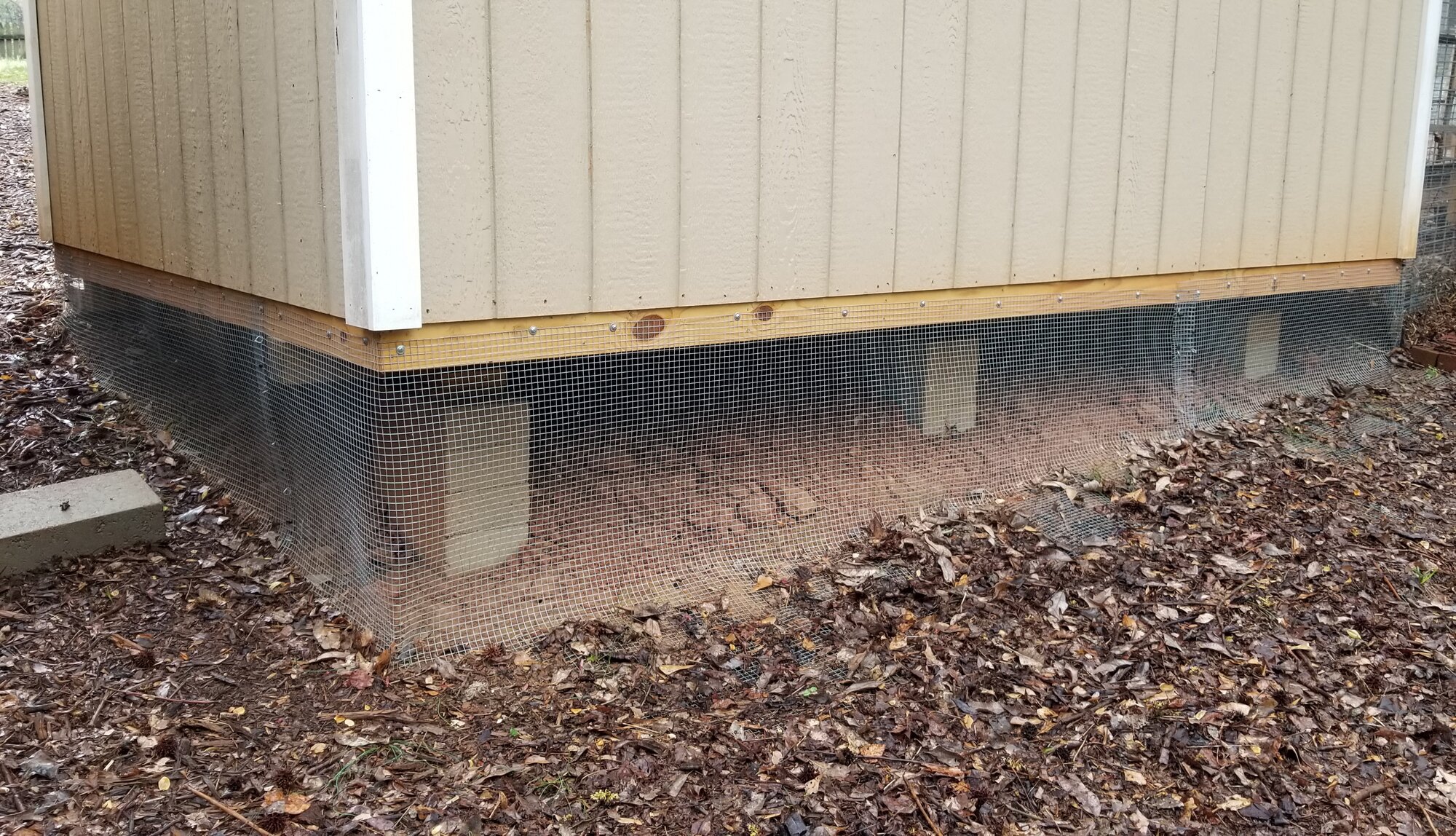 Without seeing photos... or seeing dimensions...

I would agree with you and keep the newer coop open underneath for cats to get there... and let chickens get under the old one.

A rake is good to roll out eggs from under a coop.

Thank you so much for your replies. I did use 1/2 inch hardware cloth to build their pens and it shocked the heck out of me when I saw a mouse stuck in the half inch, apparently he got the front part of his body but not the back end and there he was stuck and dead as a doornail. I had always heard if they could get their head through then they could get their whole body through but apparently that's not the case and to get the dead body out I had to back it out, learn something everyday. I already bought a ton of 1/2 inch hardware cloth so changing everything at this point is not an option. I have thought about it and read your feedback which is greatly appreciated, and I think what I'm going to do is open up underneath the old coop let the chickens and enjoy the shade, and just check it every day for eggs and use a rake if they lay eggs under there. the new coop I'm going to leave it open on three sides and just do little lattice columns if you could picture that just to hide the ugly block but cats and free-ranging chickens will be able to go under as they please. I do let my chickens free-range everyday when I am out there with them, but for their safety when I have to go to work they are in the enclosed pens for protection because we've got foxes, Hawks, and an occasional coyote that would just love a chicken dinner. Thank you so much again for your input, I want to do what's best for my flock, they bring me a lot of joy, we Garden together and they get so excited when I dig up a grub, they are such a friendly bunch and put a smile on my face everyday in addition to laying eggs. Thanks again

My chicken and duck coops/run...I’d love to see yours!
2