*UPDATE*Can anyone ID the strange creature I caught

My dogs have been going nuts at nite, barking at something up the hill in the woods. All I have ever seen is a white-ish blob. The neighbors say they have seen it in the daytime, but I haven't. They said it was coming in the yard right up to the house!
I set out the coon trap last nite and this morning I found this! 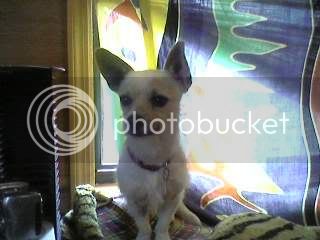 I brought him in, gave him a bath and have been trying to trace his rabies tag (no name tag or microchip). I finally found the person who has his mother, whose daughter gave him away a while back. SO now I am waiting for the daughter to get home from class and get hold of her friend so we can find out why this little guy has been running loose.
Last edited: Apr 3, 2008

Oh he is cute! Looks like a Chichuahua mix maybe terrier? Does he have wiry hair?

Glad it was a LIVE trap!

wire-haired heinz 57 is my personal opinion
maybe a rat terrier cross. Cute little guy, friendly once I got hold of him but I DO NOT NEED ANOTHER DOG!!!!!

keep telling yourself that, but I think you just got another dog.

A small one like that? He'll fit right in and you'll never know he's there. At least that's what I always tell my hubby!

Nah! I am pretty good at rehoming strays. And I DO know my limits. For example, I stopped by the pet shop to list this guy as lost & found and there was a gorgeous little Serval kit looking at me. I have always wanted one, but I just do not have the room right now or the time it would take to train one properly. So I just sighed and left. (and the shop has a great layaway plan and they give me discounts too)
Although....I now have a horse that I really didn't need. But she needs a lot of TLC to get her to trust people again. Maybe I will eventually find her a good home too, but for now.....

Quote:
Need to edit to say

R
Strange Egg. Can EE lay another color? Or is a young pullet already laying?