PLEASE NOTE I HAVE ADDED MORE ACCURATE PICTURES of the SET UP on PAGE 5 of this post THAT were taken today 10/16/10, thanks for your help. I would also like to add that just because I said I didn't hear an alert doesn't mean there wasn't one as I was in a different coop and sorry for any confusion. I HAVE TRIED TO bold or put in CAPS my additions to this original posts for those of you who have been so helpful, thanks.

I went to go lock coops right before dark and found the screened door was part way off as I had forgot to put the heavy thing I lean against it on that day but it still usually stays on but the bottom was on and it was tipped open at an angle going upwards so I knew something may have gotten inside. I counted and all were well but one of my 4 month old araucanas was dead on the floor of the coop and it's vent insides all missing but no blood or feathers around in the coop. This group stays in the coop as their run is being built now. I put the door screened in poultry fencing up during the day to give them extra light and air and has always been fine before.

I read the thing to read before posting and all I can think is maybe weasel? DO they come out in daytime as in late afternoon OR I AM ADDING HERE THAT THIS COULD HAVE HAPPENED RIGHT BEFORE DARK When I discovered IT. I did hear one scream a little earlier that afternoon but I was holding my peachick and thought it may just be a fight among them and couldn't check and then heard no alert so I forgot about it after pea was back in her crate. 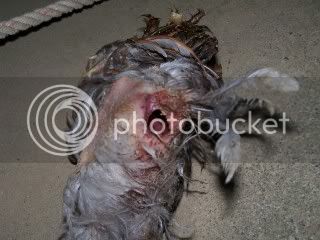 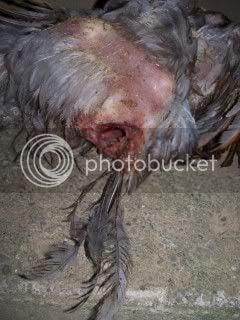 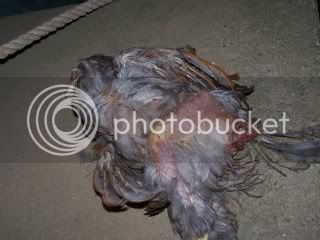 Here is a picture today taken from outside the door. I also tie it in place, now I lean several heavy things against it until I can make it more secure for them, there is a tunnel underneath that something dug so I blocked that as best I could too.

It looks like it could of been a weasel but you'll need some more opinions.

I added photos of bird after attack all in caps to the title, that pretty much spell it out. Thanks.

Set a live trap. One critter a trap is likely to catch that is partial to the prey's backside is a oppossum. The way the mutilated bird appears is not consistant with what I look for with weasel attacks. Two much feather damage among other things like throat appearing relatively intact.
Last edited: Oct 14, 2010

Having lost a dozen birds to a weasel last winter I can tell you it isn't weasel damage, they don't generally feed on the bird as much as kill it by cutting the jugular and lap up the blood--in fact it is often hard to see any damage. Also weasels don't force their way in, they aren't strong enough for that but come in through small--half an inch or larger--openings. I suspect your bird was attacked by a coon or possum--most likely a coon as it would easily force its way in.

Yes, set a trap. Either a coon or oppossum will be taken.

While members of the weasel family are noted for not killing by chewing out the insides of a bird starting at the vent they most certainly can and do.

Was your bird that was killed laying, one of the other common causes of losing a hen is for her own flock mates to peck at a prolapsed vent until and sometimes past the point of removing its intestines.

Would flock mates remove feathers? Do weasels pluck? A weasel attack might also be indicated by the nasty weasel smell.

No laying only hatched June 4th. I have one bird in there with a limp who stays on ground but she "Gimp" must have hidden, the other 15 were June 4th hatch and my older phoenix from 11 months to 16 months and none of them or the 7 that laid were bothered. Where would I put the trap? RIght outside the coop and what do you suggest for bait since I have a lot of free rangers outside don;t wnat them getting caught in it?