Not much recent information on this hatchery,so I figured I would provide some.


I chose them because they were the only hatchery that had all the breeds I was looking for during a time where most hatcheries were sold out for the year. I ordered from them the week of 9/1/2020, and selected breeds their website said were available for a week of 9/21/2020 ship date.

I called to make sure all chicks really would ship on the same day, and was told the availability dates were accurate. This seems to be true as the breeds I ordered numbers did go down after my order was confirmed. There was no shipping confirmation email which I found strange, and I had to call again to receive a tracking number as well to make sure they shipped. When I have ordered from other hatcheries I was given a shipping confirmation as well as a tracking number via email without needing to ask for it. Still the two people I spoke with were nice enough, and they quickly assisted me. No wait times or being put on hold so that was a plus.


What I received+general quality after 6 months

I ordered 25 chicks total, and received 28 chicks. One black cochin arrived dead, and a partridge cochin died the next day. The rest survived past the chick stage. The chicks were packaged well, and they arrived on time.


1. 1 Salmon Faverolle Male
He was my main reason for ordering. He looks great, an overall good quality bird in my opinion. Of course not a show bird, but for the purpose of this review "good" means "looks enough like the pictures on the internet to satisfy the average person".

2. 6 Assorted Cochin females
I was very impressed with this assortment. I received 2 black,2 partidge,2 gold laced,1 silver laced, and 1 grey. They are all nice looking, and I have no complaints about them. Was happy to receive such a variety of color.

3. 1 Black Cochin Male
I assume he was the one who died in shipping.

4. 1 Partridge Cochin Male
He is enormous at 6 months, and has beautiful coloring on him. I have been told by others that he is odd looking for a cochin, especially his long neck. Until recently I considered him rather ugly, but I think his slow growth(cochin trait) means it will take about a year for him to really come into his looks. His personality is good which is important on such a big bird. Final verdict on this guy is pending.

5. 8 Assorted Rare Breed females
I received 2 orloffs,2 bielefelder, 3 blue/grey langshans, 1 salmon faverolle, and 1 sicilian buttercup. Given that both Cochins and Easter Eggers were available in the list of possible chicks I was rather worried they would shoulder me with mostly those. However much to my surprise they gave me an impressive mix of nice breeds. They all look nice enough to me,and I certainty have some new favorite breeds because of this batch. I believe all but the Orloff and maybe Buttercup are laying eggs.

6. 7 Easter Egger female
I received 6 hens and 1 rooster from this batch. This was the only time they got the gender wrong on a chick. The hens all look rather similar being shades of brown/orange. All 3 lay a green egg in different shade, two lay pretty large eggs as well. Satisfied with these except of course one being a male.

7. 1(+1) Easter Egger male
They look nothing like the hens which is nice. With EE two looking the same probably means they are siblings after all so I appreciate the diversity. However one of the males had terrible genetic faults that really showed up as he passed the chick stage. Wye tail, one wing larger than the other, and a generally odd bone structure compared to the other male. An EE having major genetic faults does not surprise me,so I don't really hold this against them. The other male is white with a green tail, and I have no complaints about him.

Out of 28 chicks only 2 died, and out of the remaining 26 only 1 was sexed incorrectly. The low mortality rate along with impressive accuracy sexing the day old chicks had me impressed especially given how bad some of their older reviews were. I felt some care was put into selecting chicks for the two random assortments I ordered compared to what I have received from other hatcheries in the past. I think your average chicken keeper would be pleased with the quality of these chickens.


edit: A link to an album of low quality pictures of them

Do you have any pictures? I'm glad you had a good experience with them!
H

HappyDuckie said:
Do you have any pictures? I'm glad you had a good experience with them!
Click to expand...

I will add these to the post as well, not the best pictures though.

I'm too drunk to taste this chicken 🛸 🏴‍☠️

Do you happen to remember what state they shipped from?
I ordered from them once and the chicks actually came from NM.
I matched the address to Privett hatchery.
I asked Welp about it to find out they only actually sold meat breeds. Everything was drop shipped from Privett.
H

The Moonshiner said:
Do you happen to remember what state they shipped from?
I ordered from them once and the chicks actually came from NM.
I matched the address to Privett hatchery.
I asked Welp about it to find out they only actually sold meat breeds. Everything was drop shipped from Privett.
Click to expand...

I remember tracking the package and seeing it pass through part of Texas, so it probably was NM.
Last edited: Mar 30, 2021
N

I ordered from Welp hatchery. But never again! I placed an order on 3/5 for a shipping date of 4/28. I ordered 19 ducklings. When picked them up on 5/1 from the post office. The box smelled bad. I could see some movement in the box. Well, my son opened the box and there 15 dead duckings. One more died later that day and then the another. We have one survivor. It made me sick. Those poor things were in a box the size of a shoe box. No handling info on the outside. Such a shame.
J

Nancy8140 said:
I ordered from Welp hatchery. But never again! I placed an order on 3/5 for a shipping date of 4/28. I ordered 19 ducklings. When picked them up on 5/1 from the post office. The box smelled bad. I could see some movement in the box. Well, my son opened the box and there 15 dead duckings. One more died later that day and then the another. We have one survivor. It made me sick. Those poor things were in a box the size of a shoe box. No handling info on the outside. Such a shame.
Click to expand...

Did they come from San Jose Ca? Suddenly several hatcheries have ducks coming from San Jose, and all horrid. Back packing, ship tracking off. Boxes circle Denver for days. Its sound like a new vender has just come on line before they had their systems in place.

I have an order coming early next week from them. My first time ordering from them so I have no idea how it will go. My post office takes pretty good care of me though.

While I currently have no plans to add hatchery (or any other, really) chicks to my closed flock, I do want to say how much I appreciate these "6 mo" posts. Its one thing to see a post that USPS didn't F'Up delivery, or that the breeds and genders were mostly as described from a major hatchery upon delivery - but knowing how the birds fledged out and developed, 6 months down the road is a real bonus.

Doesn't matter (except to the birds, I suppose) if all the chicks arrive alive when 6 months down the road they have revealed major genetic faults or truly subpar performance for the breed. That's an investment in time and money I'd rather not make. The drop ship from Privett is also good to know - it offers possibilities for purchasers deciding whether to buy a bird from one hatchery or the other if Privett is filling some of Whelp's orders.
K

I just recieved my 15 chocolate turkeys from Welps. I ordered late March with a shipping date of the week of May 24. They arrived in great shape with only one a little lethargic but bounced back quickly with a little care and heat. They did stipulate in the order confirmation that they bill the friday before shipping and do not send any further emails ie no just shipped heads up. I watched my bank accout for a charge thinking that would clue me in on a shipped confirmation. There was no charge. I contacted the company through phone and when I did not recieve a return call I contacted through email. I got a quick return email (same day) confirming the chicks had shipped on the monday may 24th. I recieved them on wednesday may 26. I still have not been charged. I will have to contact them again. I usually go through mcmurrays hatchery but they did not have chocolate turkeys available. I did recieve some tophats and ameraucanas from mcmurray. Other than whatever is going on with billing, the no confirmation on shipped chicks and the delay in phone communication the turkeys themselves look great. They are healthy and playful and eating and drinking great.
Click to expand... 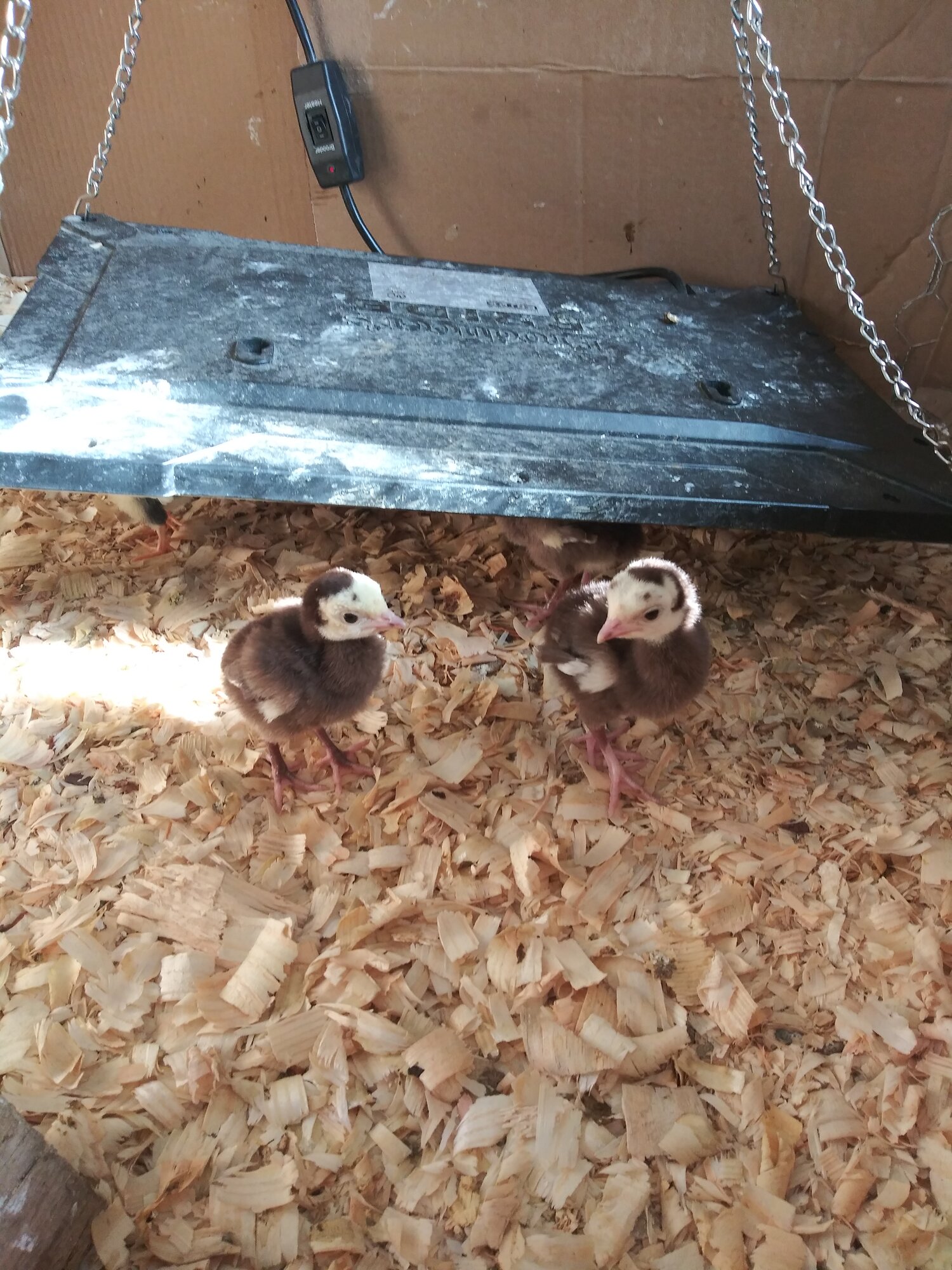 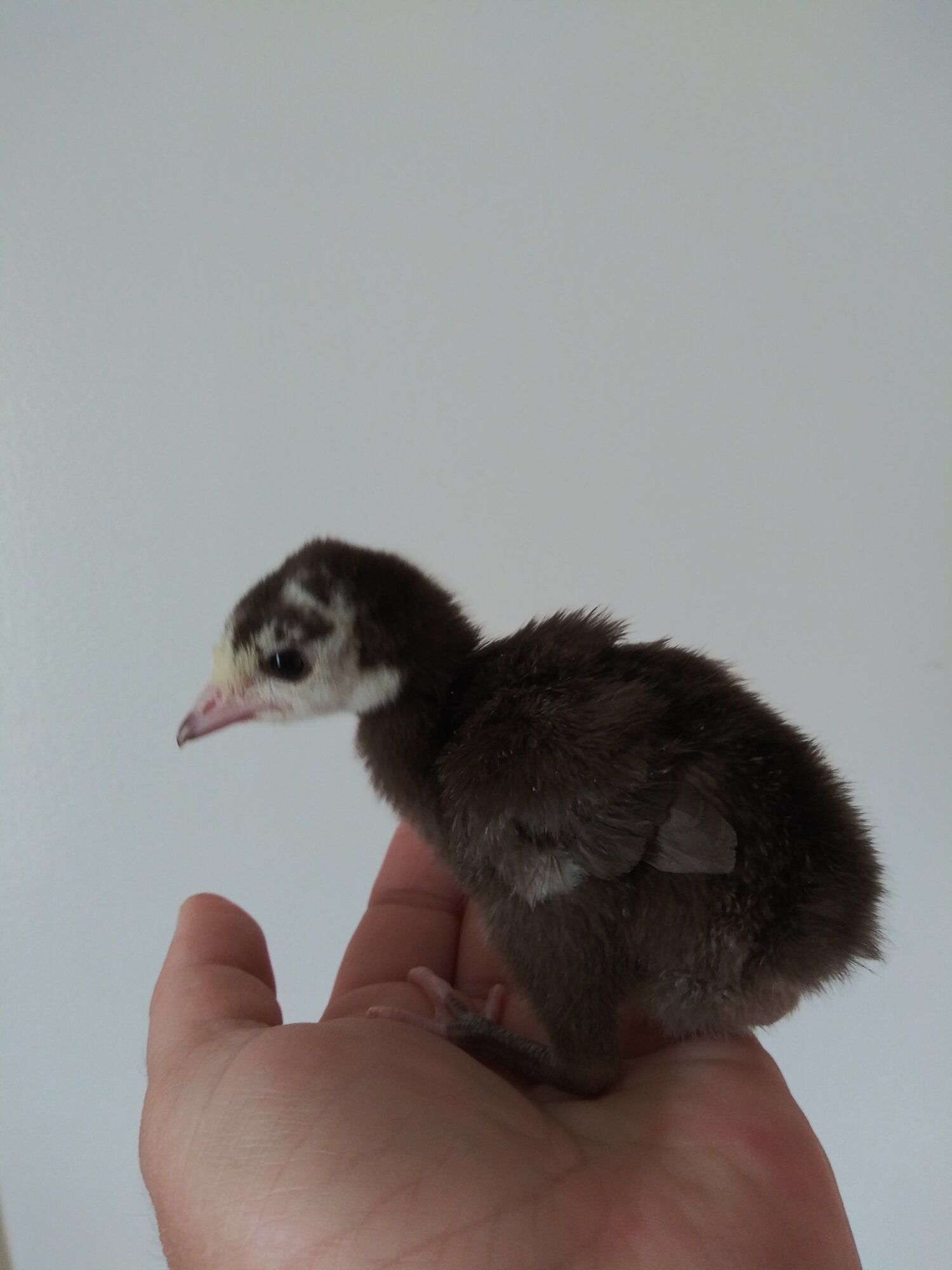 Was a nail biter, but my order from Meyer arrived this afternoon
4 5 6