What color is this chick?

And can you attempt to figure out her parentage?
Choices for hens: Delaware, speckled Sussex, Red/wild/brown EEs
Rooster: half red EE half Barred rock (dotted feet ((mostly yellow but with black splashes)), barred with fair amount of red leakage. dual comb)

If you know what color eggs she'll lay (both roo's sisters lay mossy green eggs), or any cool chicks she could throw into my flock I'd love to know! 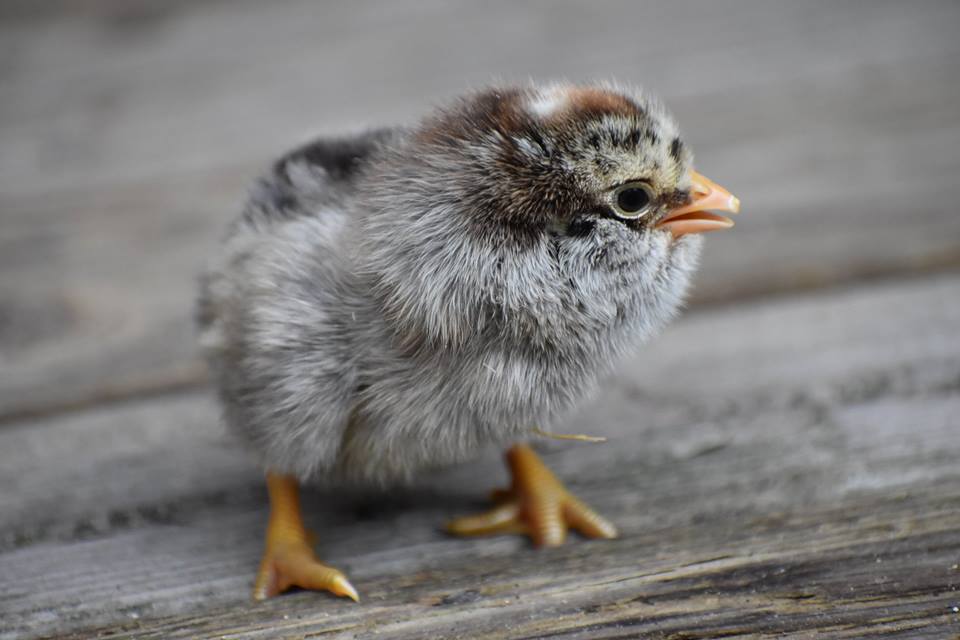 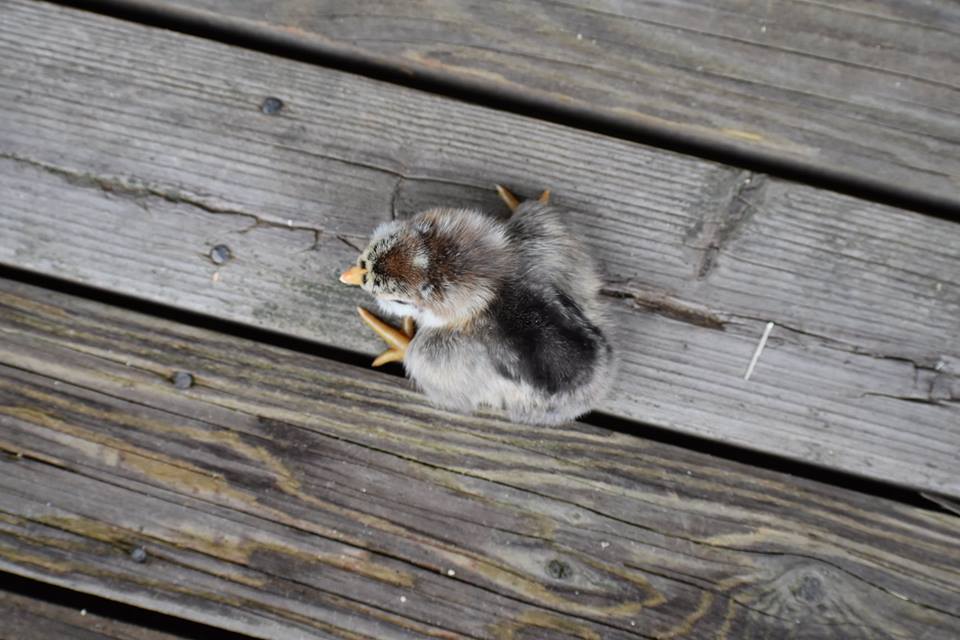 You've got a lot of feather color genes in any of those mixes and you've got a barred mixed rooster....which means all chicks, male and female, will be barred (white head dot).

So there is really no way of knowing what the parentage is of this chick nor if it is female or male.

As to egg color.
If the Delaware or SS hen is the mother, then you have 50% chance that it will lay a blue or green egg, assuming dad as an EE/Barred mix got one blue shell gene. (He might not have...which means you get 100% brown).

If an EE hen is the mother, and she has the blue shell gene (did the chick hatch from a blue egg?), then you will have 25% chance of brown and 75% of blue/green (see math below).

You can have a maximum of 2 genes for blue shells. Pure breed blue layers, such as Ameraucanas and Cream Leghorns, carry both blue genes...so have 2 blue genes.

Each parent gives 1 blue (or non-blue) gene to the offspring. It is a crap shoot as to which of the genes the parent passes down. (Which is why you want 2 blue genes in a parent to assure blue passing down.)

The nice thing is, as blue is dominant, you only need 1 blue gene to be passed down to get a pullet that lays a shade of blue.

So the math sets in.
If both parents have 2 blue genes, then all offspring will be blue layers.

If 1 parent has 1 blue gene, the other 2 genes....all offspring will be blue layers, varying shades.

If 1 parent has 1 blue gene and the other 1 blue gene (your EE mixes mated), then mathematically it works out to be 25% non-blue and 75% blue.

Green is formed as brown wash (from brown layers) is applied over the blue shell base. It takes about 13 genes for brown wash, which can be in varying degrees. Brown over white produces brown eggs. Brown over blue produces green eggs.

In order to get olive, you have to have a dark brown egg layer as one parent. The dark brown wash over blue produces the olive.

Good luck with your egg color project. It is a lot of fun breeding for a colorful egg basket.

Lady of McCamley said:
You've got a lot of feather color genes in any of those mixes and you've got a barred mixed rooster....which means all chicks, male and female, will be barred (white head dot).

So there is really no way of knowing what the parentage is of this chick nor if it is female or male.
Click to expand...

She is about 4 weeks now, and not showing clear barring, more EE feather pattern. the barred is the only roo I have had in months, before that his father...
Trying to upload a photo

Good news is it doesn't show comb development which would mean roo.

The soft barring is from the roo. All chicks will be softly barred from dad's barring gene as all chicks get one of his z chromosomes and all of his z genes will carry barring .

Check to see if is pea combed. That can help with parentage. Your EE should be pea combed, and dad should be. Pea comb and the blue shell gene lie close on the chromosome so you usually get both.

...pea comb is dominant over single. If dad is single, and chick is pea, then you know EE mom.

If dad is pea, it won't help as all chicks should be pea comb with your choices.

Lady of McCamley said:
...pea comb is dominant over single. If dad is single, and chick is pea, then you know EE mom.

If dad is pea, it won't help as all chicks should be pea comb with your choices.
Click to expand...

And here it gets more complicated! Dad is dual combed (father was single, mother was pea) and the CHICK is dual combed! (I think; looks like pea comb but has 3 vertical rows... and is bumpy)

seeing as single comb is the result of lacking any OTHER combs over top of it, does this let me cross out any pea comb'ed hen on my list? That would also explain the yellow legs, instead of spotted or green like EEs or the roo?

what color eggs dose she lay

I don't know what you mean about dual comb.

Pea comb females typically have a main row of peas then on each side a row of small peas. Males with pea combs will have 3 rows of peas.

All the hens you listed except the EE should have single combs, so the chicks should have pea comb.

If you are seeing 3 distinct rows at this age, it could be a roo.

Delaware Crosses - what can be sexed at hatch?

M
Blue chick in a hatch... where did it come from?