What did you do in the garden today?

Good afternoon gardeners. I found the big nails to hold down the edging along the flood vent so fixed that and cleaned up the coop yard. I moved the trash cans that I use for feed into the mini coop and put the bags of feed in them, the coop has been converted to a duck brooder and all the bowls and feeders are out of Frankenwagon and put away until we’re ready to use them. I still need to spread some of the wood chips around and throw some small branches into the compost pile. Everything is looking good but now garlic or carrots or lettuce yet. Maybe I haven’t watered enough. Have a great night all 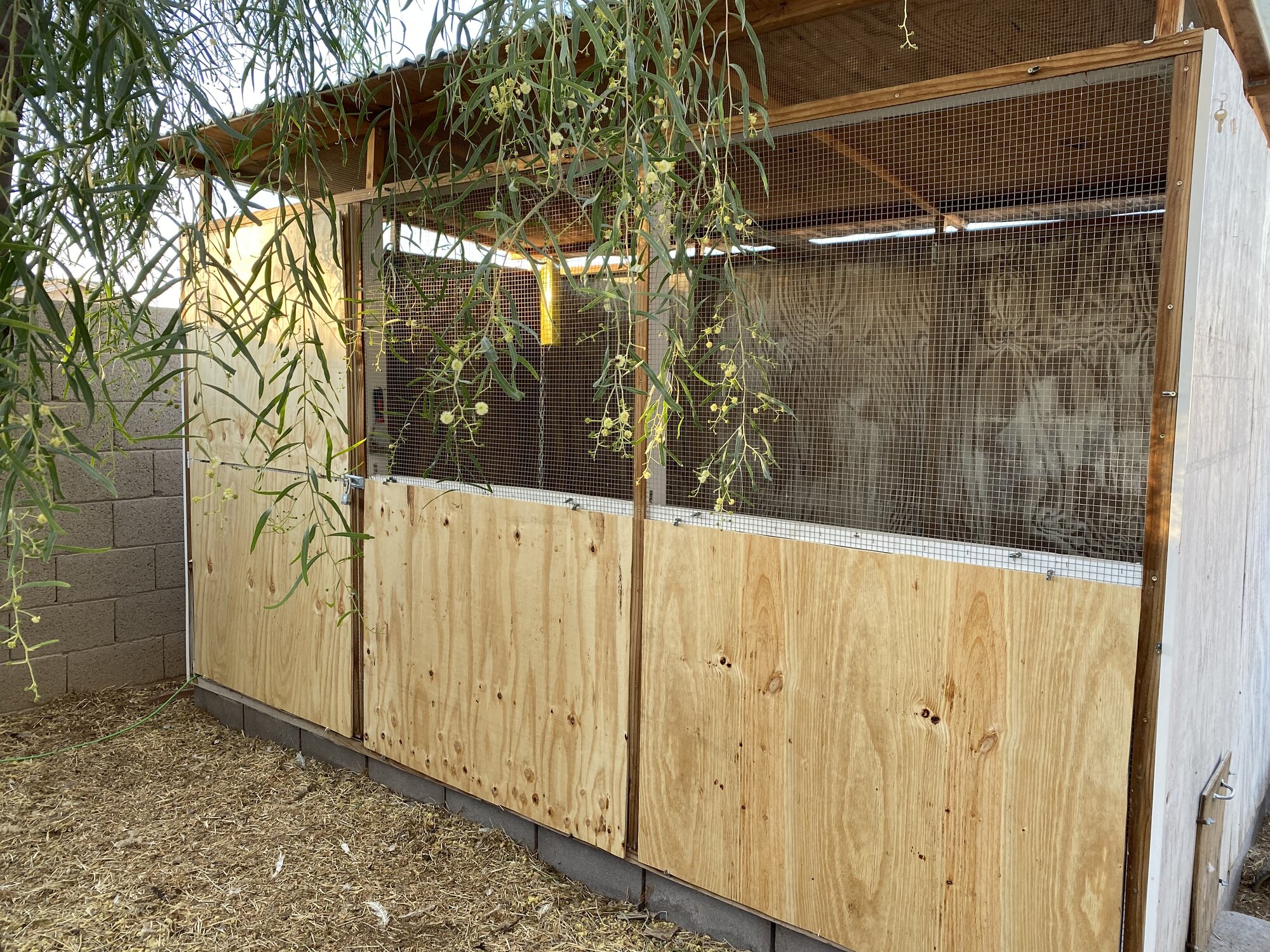 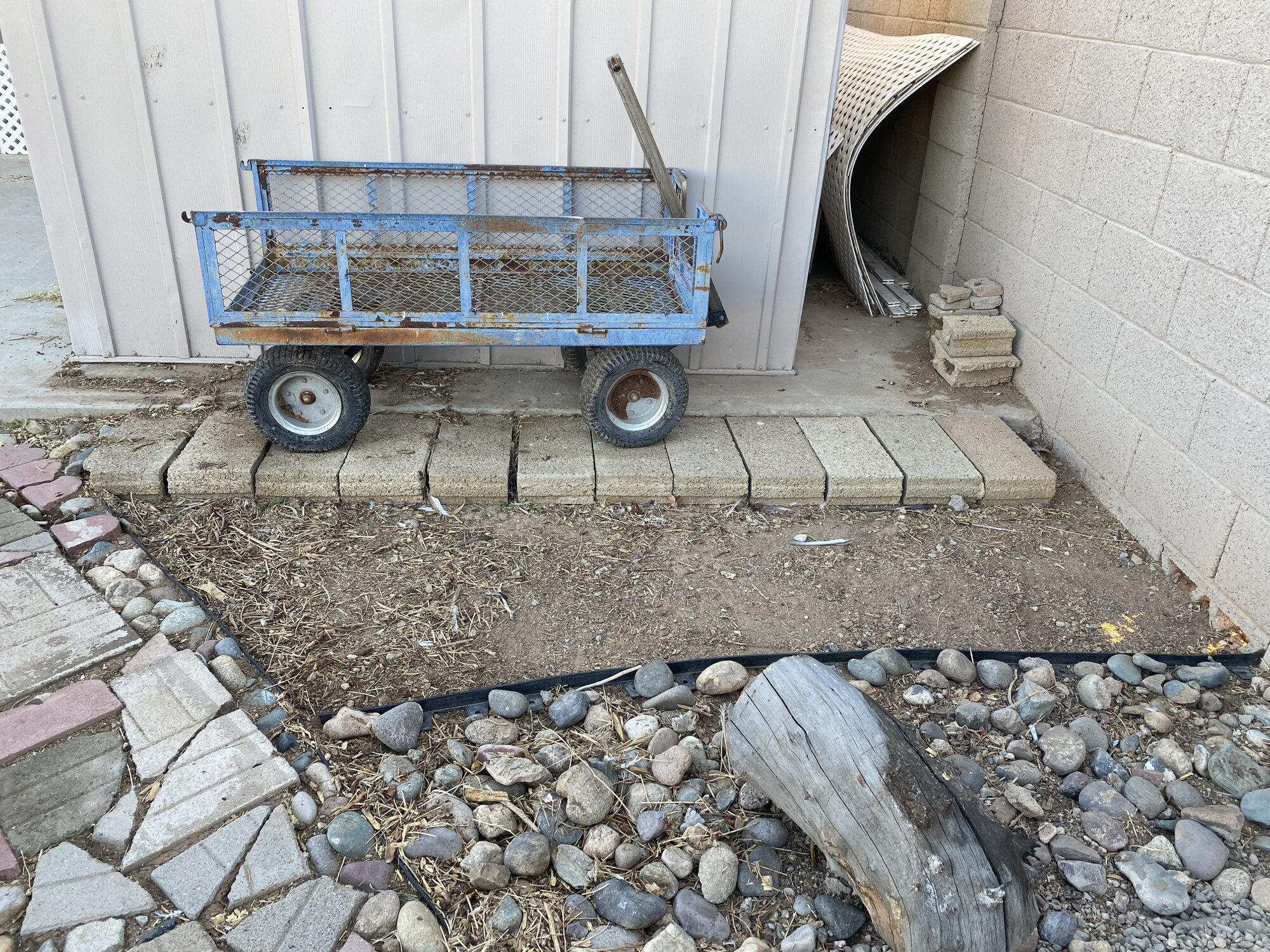 igorsMistress said:
Thank you for your condolences all. I had a feeling that wasn’t going to work out. Doesn’t bode well when 11 out of 13 eggs aren’t even fertile and you only have two shipped eggs left. Statistically the odds aren’t good. Hopefully the universe plans for me to receive healthy ducklings by mail later in the week. They’ll all be fawn and white runners and are supposed to be female. I ordered three but emailed to see if I can add one more. I didn’t do a thing yesterday except clean my closet and watch movies. The last Terminator was better than I feared and I liked Doolittle quite a bit. It’s early here and the sun isn’t up yet. I turned on the hose and ice came out of it, but it’s 40* ? Weird but ok. I think the pups get to go to the park shortly and then we have to do our grocery shopping. My daughter found out one of her coworkers spouses has covid and she spent all day in a closed room with her. I think they have to wear masks but that’s terribly close to home. Anyway, have a great day everyone.
Click to expand...

My goodness, and the hits just keep on coming... thoughts, prayers and

Straw and mulched leaves! I previously was considering a plastic tattoo over the garden beds. I decided against it with advice from some of you. Now I have 2-3" of mulched leaves on the garden beds. I also have 4 straw bales I can use if needed. I'm hoping to keep the baked intact until Spring and use the straw as mulch around plants. It's the bakes you find at large hardware stores for Fall decorations so there's definitely grass seed and possibly prairie plant seeds in the bales. Hopefully letting them sit all winter will allow enough composting action to prevent the seeds from sprouting in the Spring. Some seeds already sprouted right in the bales. I simply flipped the bales over though to smother the seedlings.

My goodness, and the hits just keep on coming... thoughts, prayers and

Thanks lady, we keep dodging as best we can! This makes several brushes with covid for us this year.

Sorry about your eggs, Igor's Mistress. Better luck with the ducklings.
It has been colder and rainy the last couple of days. I cleaned up the thanksgiving stuff, put the extras in the freezer and rested. Yesterday, I packed up all the Fall decor. Today, I got out the Christmas decorations and started that marathon. I have a little more than half done. My Nativity scene is up- it grows almost every year. Along with the ox and donkey, I have chickens (with a coop), ducks, dog family, deer family, the camels, sheep, a couple of rabbits and because it is Texas - a Longhorn and calf. The main things left are the garlands and my mantle village-complete with a Walmart. That sucker is like chicken math- just keeps growing. I now have a suburb in the spare room on my sewing table. I used to hate Christmas, now I guess I overcompensate and decorate every single inch of the house. I had to buy a small storage shed just for decorations so I could use the main storage shed for tools, keepsakes and everything else. That storage shed is completely full to the rafter.

Covered most of my plants with sheets. Because of the freeze tonight. Didn’t have enough to cover the strawberries hopefully the guy I got them from is right and I don’t need to cover them

So I won't be growing purple brussels sprouts again. You know how an over cooked brussel sprout gets that kinda grey green look? Yeah, purple looks even worse. Plus before I even could cook them I had to let them soak in a bucket overnight and that was after rinsing them multiple times in sometimes hot water to get the many aphids and tiny slugs off. I suppose I'd have the same bug issues with a green variety as well. All is not lost though, the chickens and rabbits love them! I present, Upside-down Purple Xmas Tree! 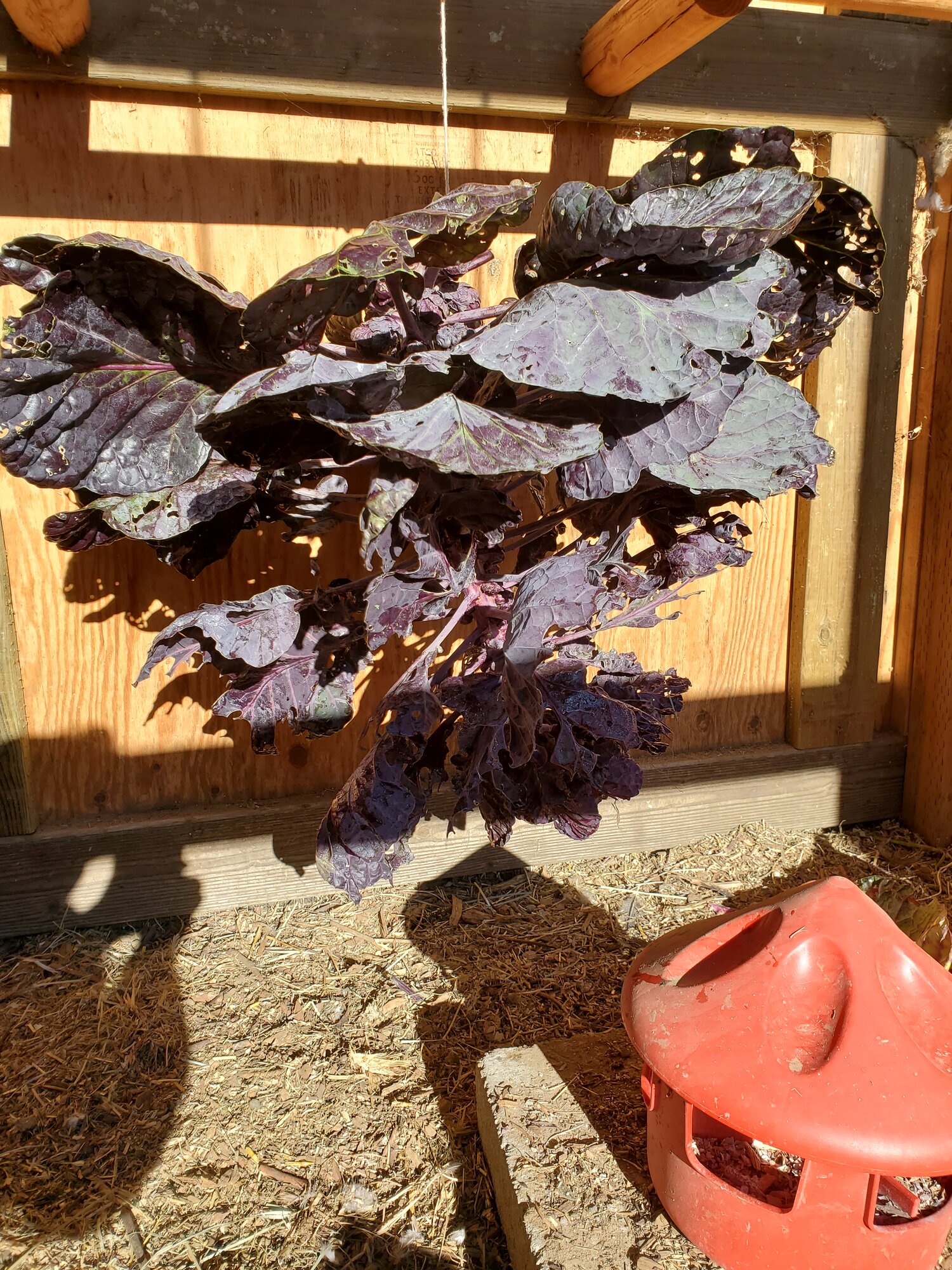 This pic was right after I hung it and the chickens weren't sure about it. But they chewed all the leaves off by the next day. Then I trimmed off the leaf stems and they finished the sprouts as well. I gave them a new one yesterday. The rabbits get just the leaves and not too much of that.

Cleaned the coop (to the ladies great delight) and scattered some of those nice smelling herbs once I was done. The ladies also got yogurt with oatmeal and some baked squash guts. I used up the last of the chopped straw and pine shavings so I'll be making a trip to the feed store shortly. Watered the greenhouse, the ginger isn't growing but it gets pretty cold at night. One of the ladies gave us a small egg yesterday. It's either a sfh or a sussex egg, I'm hopping it's a sussex, they haven't laid yet and they're one of the few birds that aren't molting. One of them squatted for me the other day so we'll see. They are so smart, they know I'll slip them treats on the downlow since they're lowest in the pecking order so they watch me like hawks.

Time to head to the feed store and grab a cuppa on the way. Did I say we finally have a Starbucks in the city I go for feed? Squeeeeeee!

It was done in time for lunch.

Won't do a roast that way again! I also found out that my oven thermometer probe thingie is off by 10 degrees. Doh! Thankfully I checked it because I've never used the meat probe before.