What kind of duck is this?

I asked this question in the chicken area & was asked to move it to duck forum I am new so I was glad to hear there was a duck area as well. I have a couple flocks of chickens & one day I woke up to see with my young hens a duckling. He was not a small duckling but still a duckling. He has purple markings on his wings & I thought he was mallard but he is very small & he is about a year old now he also has no white collar marking. His bill is a tanish brownish color NOT yellow. Any ideas? I saw American Black Duck ? maybe? Roughen? I just saw Mallards & he does not seem to have the popping color his head is greenish but he has brown in his head at the top. Is there any chance of a picture taken outdoors, in better light? It's just a bit hard to see his plumage in that pic

He does look like he is blue in colour (for the most part anyway). It is unusual to get a mostly blue duck without a bib. He also has wing bars (the white stripe on his wing) and you mentioned a coloured speculum (the purple wing markings) which, combined with the fact that he is otherwise largely quite a dark blue, indicate that he is a bit of a mix.

What kind of sounds does he make? A proper 'quack' or a husky, slightly raspy sound?

How do you think the duck came to be in your yard?

70%cocoa said:
Is there any chance of a picture taken outdoors, in better light? It's just a bit hard to see his plumage in that pic

He does look like he is blue in colour (for the most part anyway). It is unusual to get a mostly blue duck without a bib. He also has wing bars (the white stripe on his wing) and you mentioned a coloured speculum (the purple wing markings) which, combined with the fact that he is otherwise largely quite a dark blue, indicate that he is a bit of a mix.

What kind of sounds does he make? A proper 'quack' or a husky, slightly raspy sound?

How do you think the duck came to be in your yard?

I shattered the screen on my touch screen cell & the camera is full I need to find the cord to connect to the lap top & free up some space on my camera. I will try to get a better picture in better light. He maybe a bit of a mix

lol. They are very loud clear quack quack quack. He seems to say quack as well. As some one just brought me a female Muscovey duck & she seems real quiet with her quack, he also cares nothing for her he is attached to my Copper Maren hen, she also bullies him & made him stand in the corner of the room all morning so they are now separated for a while & we shall try again later to see if a friendship comes of it. I will still look for female of his own kind ...what ever that may be lol

I think someone got a duckling & decided it was not for them or they could not take care of it & they just "dropped" him off late at night. He seemed ok I was out early & my hens that would have pecked him pretty good were not up & pecking yet. He was with my one hen who has twisted toes she WAS smaller at the time & slower but she is BIG now & she perches runs & pecks like the rest. So I think he was able to go to her she was slow & stayed on the ground at the time. By spring it turned into a mad crush on the ducks side of things. She tolerates him ok but it is a one sided love & she wants none of the duckie bizness. lol

After I researched if a duckin was possible or a chuck & found it could kill the hen I became busy trying to find him a more suitable love interest
Last edited: Nov 1, 2012


No, I'm afraid that that is not a Welsh Harlequin drake. But your comment made me think that he (or she) might be something like a Blue Campbell (which, like Welsh Harlqeuins, have the dusky gene, but blue as well. Welshies are different to Campbells though in that as well as dusky Welshies are also harlequin phase which allows the claret breast and neck ring to come through on the drakes, which this guy doesn't have. Campbells are dark phase, not harlequin, and dark phase allows dusky to express itself and remove the claret breast and neck ring on drakes).

I'm glad that this duck ended up with a good home even though he was unwanted by his previous owners. Their loss and your and his gain!

Great to hear that you are searching for girlfriends for him (other than the chicken....!!). He may prefer mallard-derived ducks like himself (i.e. not Muscovy) although most drakes aren't fussy once they reach adulthood

One thing that was not mentioned here that was mentioned in the original thread is that he is on the small size, and he can fly. Thought I'd toss that out there so you guys can make some more informed guesses. That's why I originally thought he was a juvenile mallard that hasn't come into his green head yet and that the picture has low lighting so it just makes him look darker. But the poster said he's about a year old now so...some kind of mix perhaps? Here he is from the side I had the window open & the lights on however he seems to want to bite & is not happy with the poparazzi he is getting today! I wanted to say my neighbor told me that he can fly I have never seen him fly. I assumed he was mallard at first & figured he could fly. I am about 2 blocks from Detroit River but I have never seen Mallards at the water. I have not seen ducks at all here just lots of Canadian Geese. If you go down town Detroit to the east side you hit Belle Isle & then you see ducks. So I am sure he came to my property by human help of some sort. & I had him in the bath room to clip one wing. I used to hand raise exotic parrots for a company in Livonia MI so I am a pro of wing clipping, just in case he does fly & gets hurt but he has never flown on his own
Last edited: Nov 2, 2012

He really looks like a mallard or mallard cross to me in these pictures, especially with the green in the head coming through. Here's my mallard boy, Acorn. Do they look pretty similar, aside from the white collar? 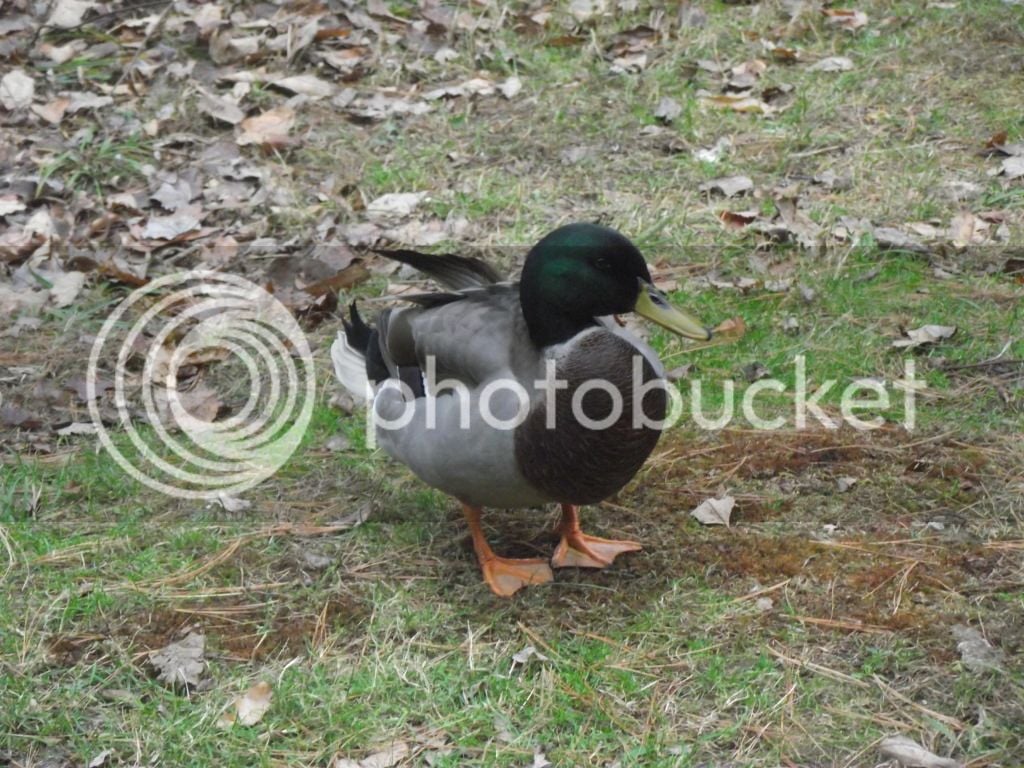 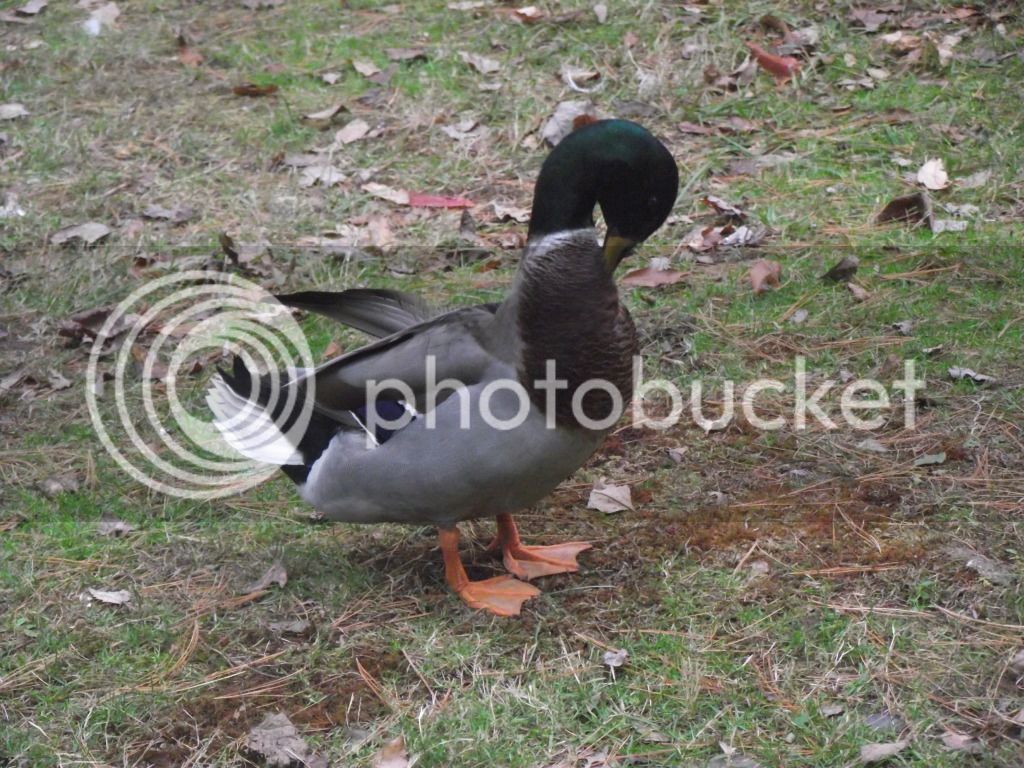 Yes mine looks similar except it does not have the white bars above & below the purple pattern on the wings, he has one above the purple your duck looks to have more blue on the wing then purple. Mine has a green neck & a brown head. Mine also has the craziest tinyest pattern on his body & his color is the same. Yours has a darker brown color on his chest & his under side looks lighter then the rest of him. Mine is not lighter under he is the same color top to bottom on his body.

He is VERY Mallardish that is why I thought he was one right away. However I saw Mallards that appear very large compared to him. The mallards I have seen look just like yours with shiny green heads & very pretty contrasts in color thru the body. Mine has the tinyest pattern I am not sure I can get him to sit still for a picture he is a wiggler/ runner

I did clip one wing after taking the above shots. I think he is a Mallard mix & I guess I will find him a few mallard females.

Acorn's speculum feathers are different colors in different lighting. With the light right on them, they are baby blue. In the shade, like here, they're purple. It's really quite pretty. I'm glad you're getting him some girls

Like I said, if you can't find them locally, Metzer Farms sells sexed ducklings, so you might try there.

B
What duck breed?
2

My duckling has a white beak! What's it mean?