When can I add new chicks to an established flock?

Hi ya'll! Well, me and the family are REALLY getting into this chicken raising thing. We went to TSC on Saturday to get a few things like wood chips and feed for the rabbits and chickens we already have. Well, they had several brooders full of chicks. My youngest son, the one in my sig pic, decided he needed a new project. He makes his own money doing chores around the place. Each of the kids do. So, with his own money, he purchased three new baby chicks. I ain't too sure what kind they are. Two of them are black with some white tipped wing feathers it looks like. And, the other one is a mottled brown that almost looks like cammo. They are all three supposed to be pullets and egg layers when they grow up.

My RIR's are close to 10wks old now I think and they are outside in their coop. When can I add the three new chickens to the flock? Do they need to be relatively the same size before they are introduced into it? I want to make sure they are all getting along before I put them together and I don't went the RIR's to hurt the newbies. Any advice ya'll?

I never add new chicks to an older flock til they are about the same size and defend themselves or get away if needed....also more than one feeder and waterer so the older ones won't starve out the younger ones...

Once they get to be approximately the same size, I would separate them by a fence for awhile so they can see each other. Feed them near the fence - throw scratch or treats - so they are close but can't do any harm . I have not blended birds of different ages yet but have reintroduced a recovered bird and am now adding a roo.
Last edited: Mar 10, 2008

Glad you posted this, I will be needing this info soon, myself.

I just wanted to say, your son looks so precious covered in chickies!!!! Too sweet!!!!!

Quote:
Thanks! He's getting into chicken raising more than me I think.

Here's a pic of the new baby chicks. Sorry for the lighting. The heat lamp sorta messed with it. Can ya'll give me an idea of the breed of the chicks? TSC just had a little sign on the brooder saying they were assorted pullets. 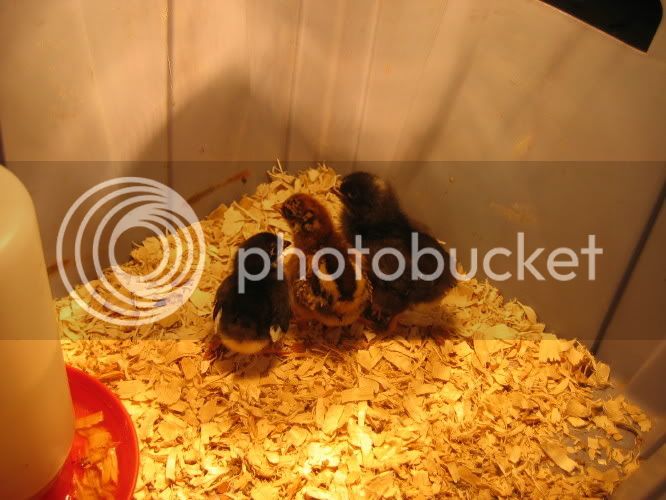 I'm guessing here: The black and white ones could be Barred Rock. The camo-ish one maybe a speckled sussex? (Again, pure guesses!) I think my SS looked like that when they were young...

The integration of new chickens to a flock is a pain in the butt. I had to do it with chickens that were 8 weeks apart and I didn't think I was going to survive! I think the best thing I did was build (well, have my boyfriend build) a new roost for the new chickens. Since the older chickens were used to 'their' roost, they didn't care to get on the new one and the new chickens had a place to run to. I wish I would've done it sooner than I did, but hindsight is always 20/20.

Another thing I did when I integrated was to put more than one food and waterer around the coop so that the younger ones would have a chance to get to the food if the older ones were protective of one feeder/waterer.

I did as the previous posters mentioned and waited until the chicks were about the same size before I integrated.

Goodluck and tell your son congrats on his new pets!!!

The little middle one reminds me a lot of my Golden Campine when he was a baby. However, I know painful little about chicken breeds. If so, however, he is just stunning now......and the females are beautiful, too.

Edit.....Hmmm....I dug up his baby pic and it looks like mine may be more spotted? Anyway, here he was as a baby for reference.

E
Introducing a single chick to an established flock

A
Baby chick cannot get on its feet, is it normal?
2

How to Introduce Chicks to Flock

My New Chick is Choking from Little Water and Food