Who's up for a good guess on this pullet? 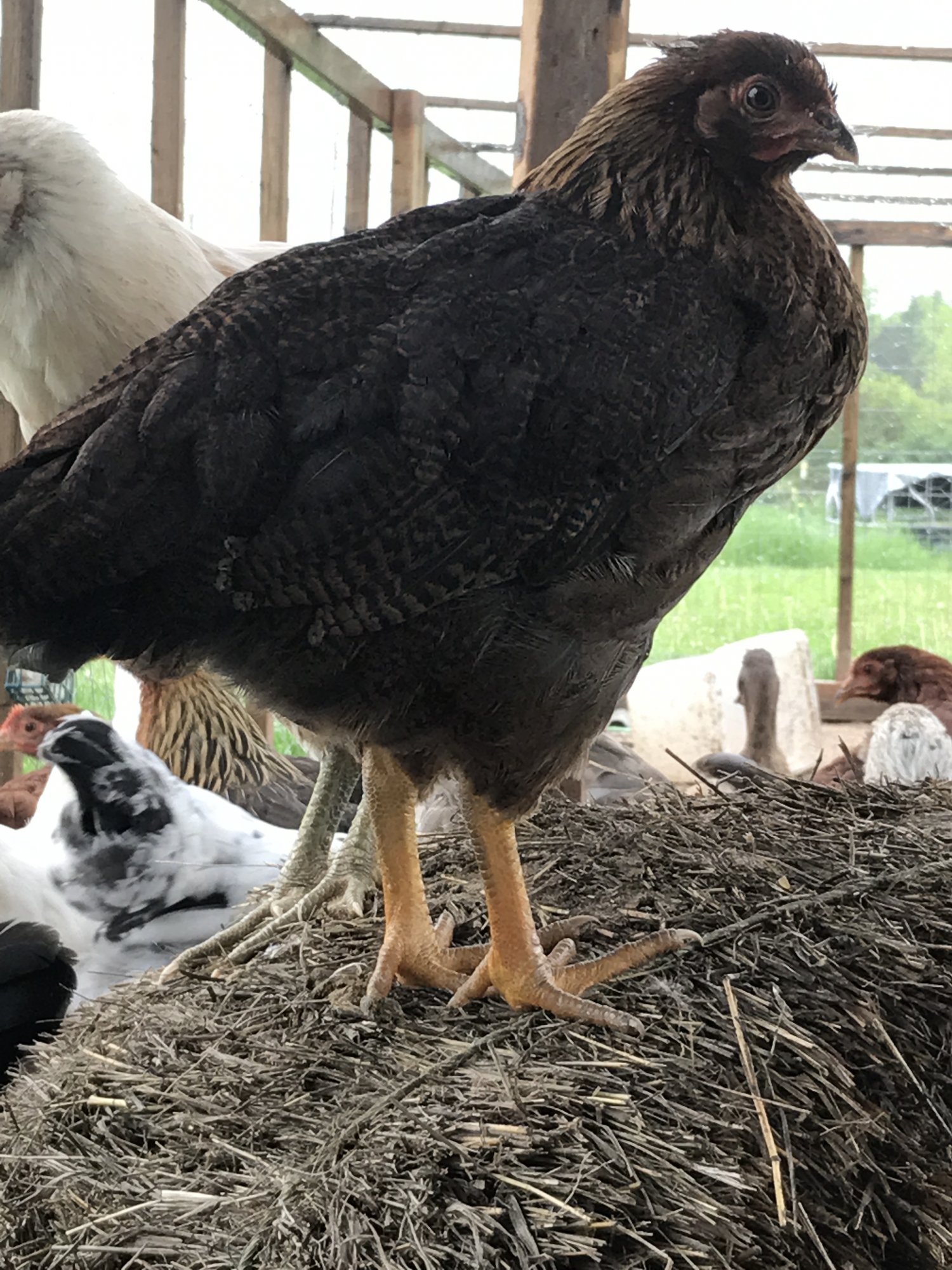 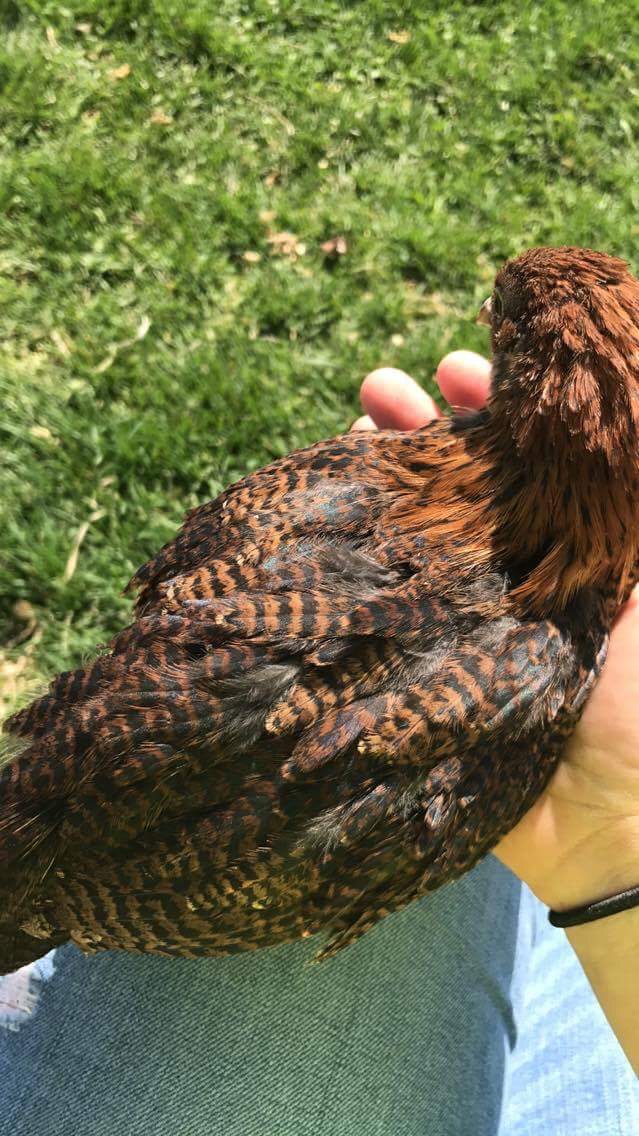 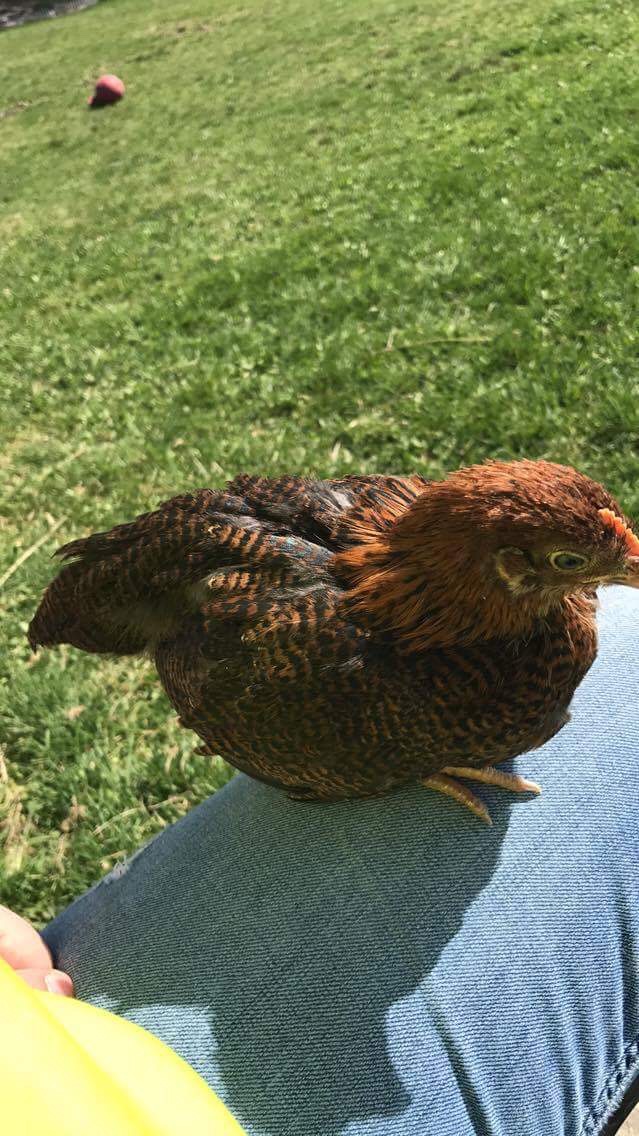 Ordered her from Meyer Hatchery. I'm not sure if she was one of the "rare breeds" or the "rainbow pullet pack". She's always had funny feathers. Last 2 pics are when she had just fully feathered, first pic is from 3 weeks ago and I'll try to get another today

My first thought was partridge plymouth rock but it looks a bit too feathered out to have the stripey look (they look stripey before penciled). I'll keep looking through their breeds and see what I can find. 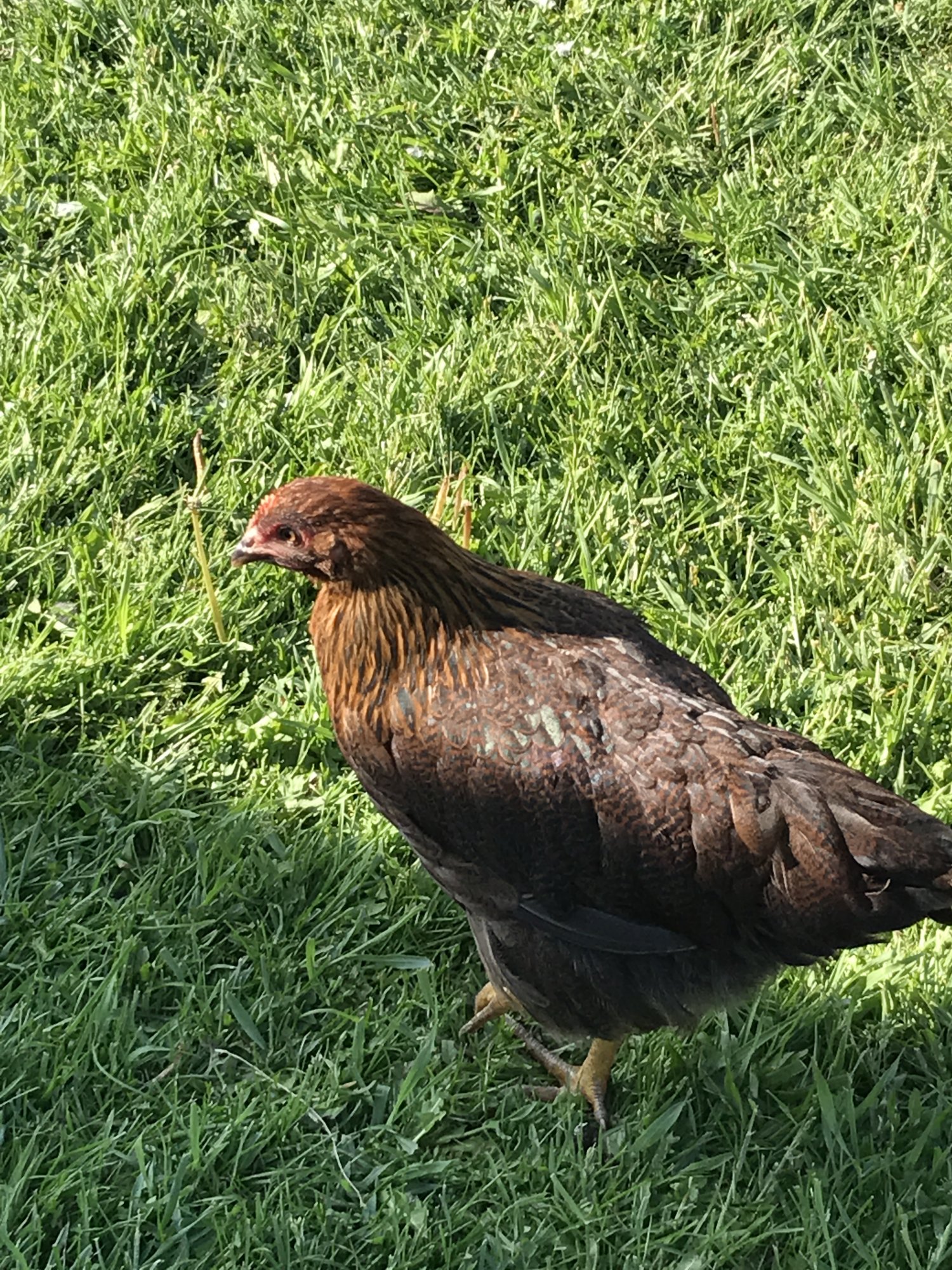 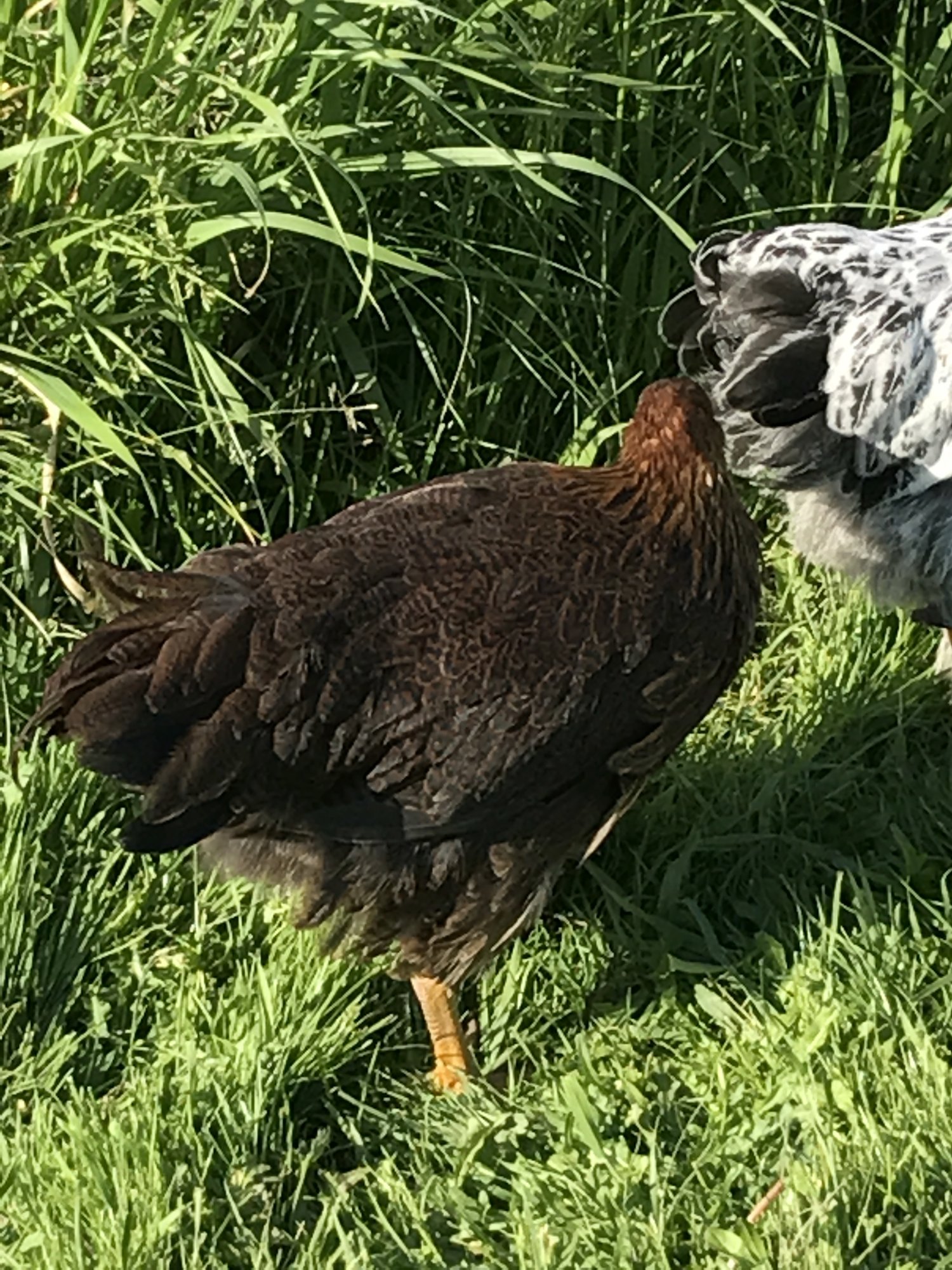 Here's one from today

Well...
She isn't a Welsummer (not pencilled, no salmon chest)
She isn't a Barnevelder (she's laced, but not double laced on dark brown with black)
...and yes I think she is a she.

However, she may be a Penedesenca (oh how I hate trying to remember how to spell that name)...Meyer carries those, and that would place her in rainbow as Penedesencas lay dark brown eggs.

Look at the top photo on Meyer hatchery Penedesenca below...that Penedesenca hen has the wrong leg color but a similar partridge lace pattern, then look at their photo on the bottom adult hen, pencilling but yellow leg color. Obviously their line has some differences (or they've put in a wrong photo). She looks like she may have gotten the laced look with yellow legs from their Penedesenca line? (That's assuming she is from the "rare" package)
https://www.meyerhatchery.com/productinfo.a5w?prodID=PAPS

...but her comb doesn't look full enough (granted she is still younger)...and it should start single and then split to a crown...

Another possibility then is their Partridge Rock, which I thought of at first looking at her. She could also be included in their rainbow package as their photo for that indicates simply a layer assortment.
https://www.meyerhatchery.com/productinfo.a5w?prodID=PARS (Partridge Rock)
https://www.meyerhatchery.com/productinfo.a5w?prodID=APRS (Rainbow Layer Pack)

I looked at their rare package, and the only one that is barred and has gold is the Golden Cuckoo Marans, but she doesn't look anything like that to me:
https://www.meyerhatchery.com/productinfo.a5w?prodID=GCMS

Thank! I'm just getting ready to let them out for the day. I think she's the funky one I got with yellow legs that are darker on the front. I've gotten all the others figured out except for one. I wound up getting an assortment of brahmas. A BCM, a White Maran, white and brown leghorns, white rock, buckeyes and some misc red pullets. I've also got some SUPER funky looking EE's this year and an up and coming GLW, Splash Maran and a Lakenvelder. Definitely an assortment

The first three pics are of another pullet I'm not too sure about. The last ones are of my possible penciled rock. 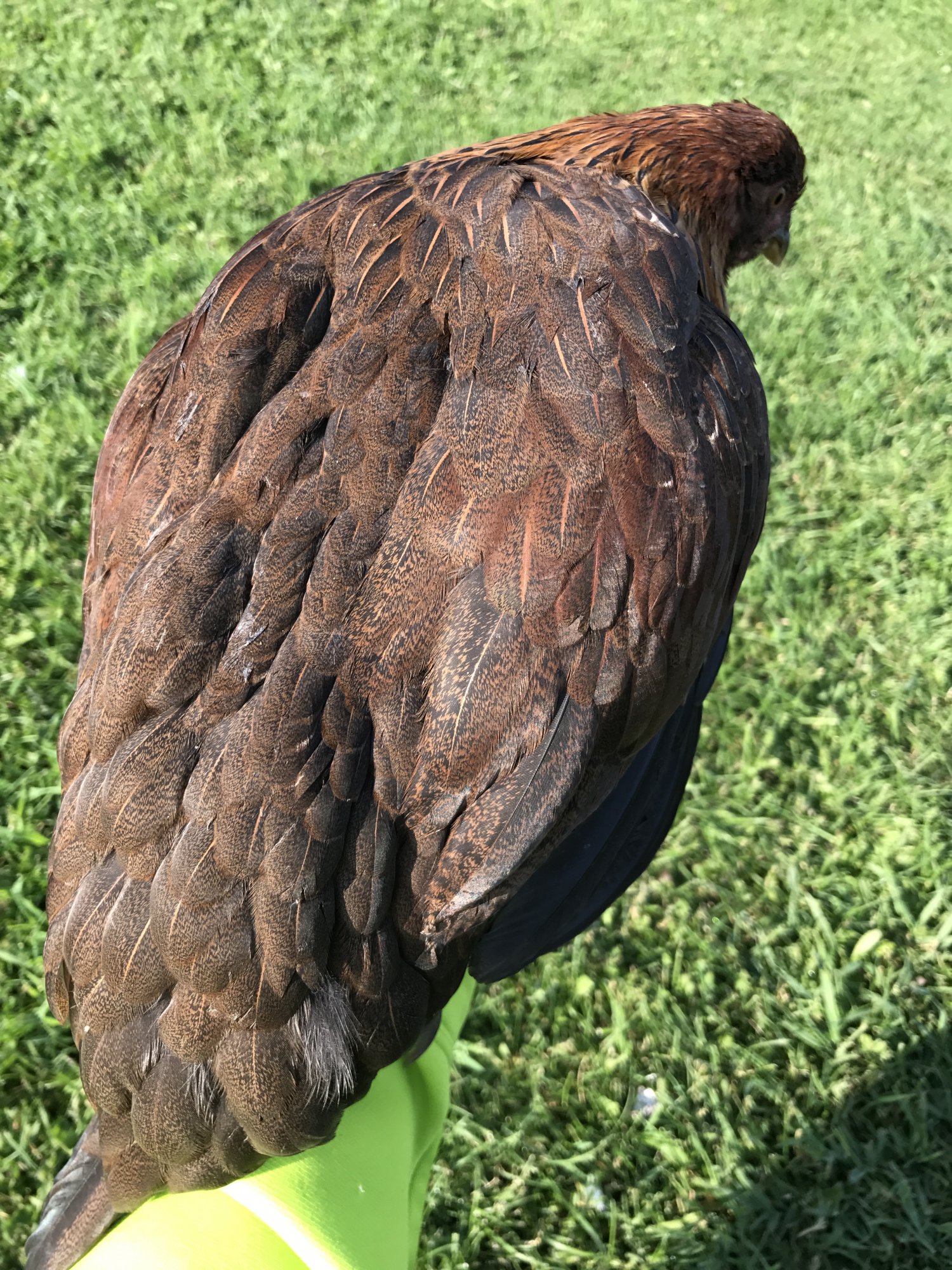 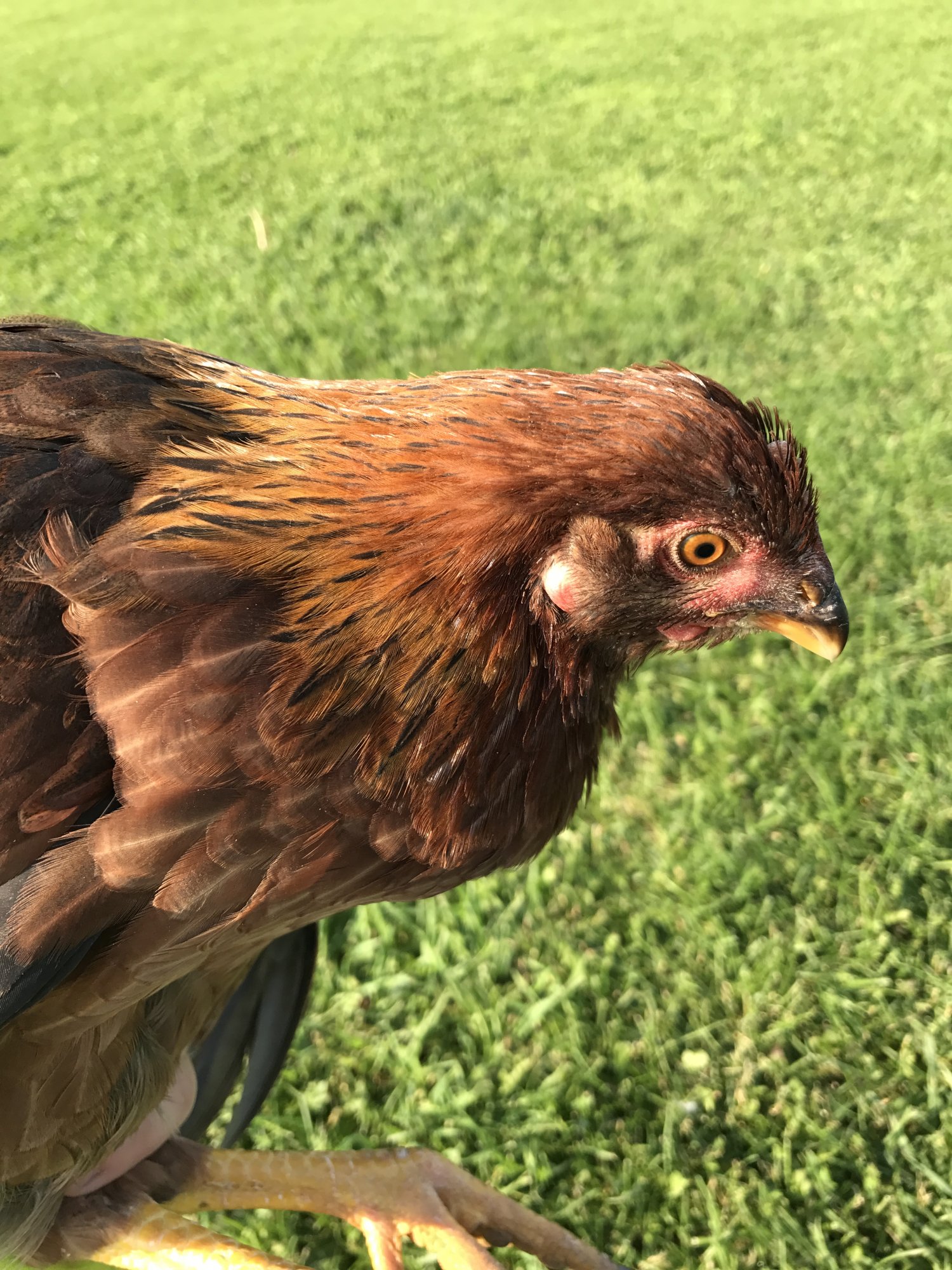 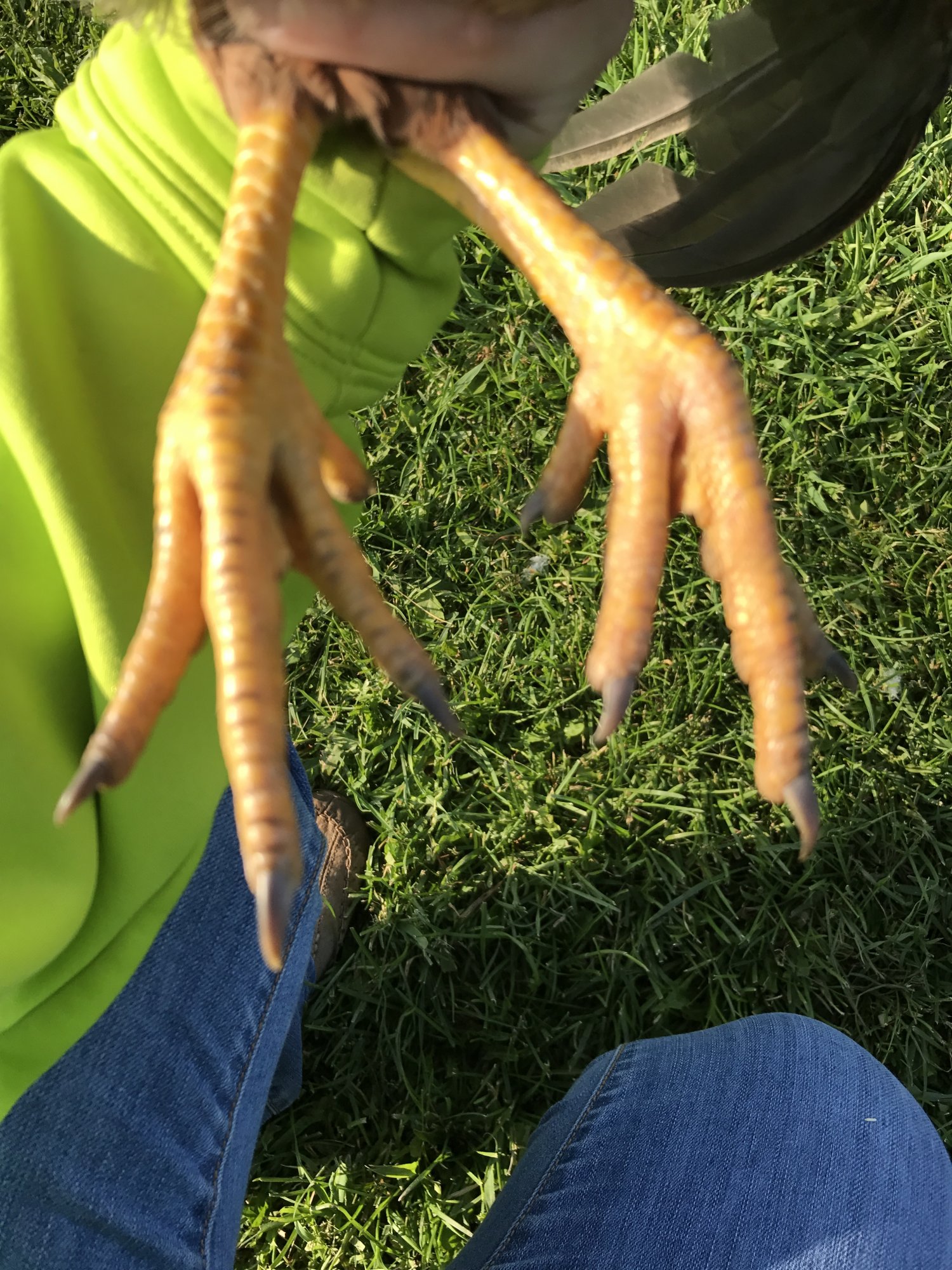 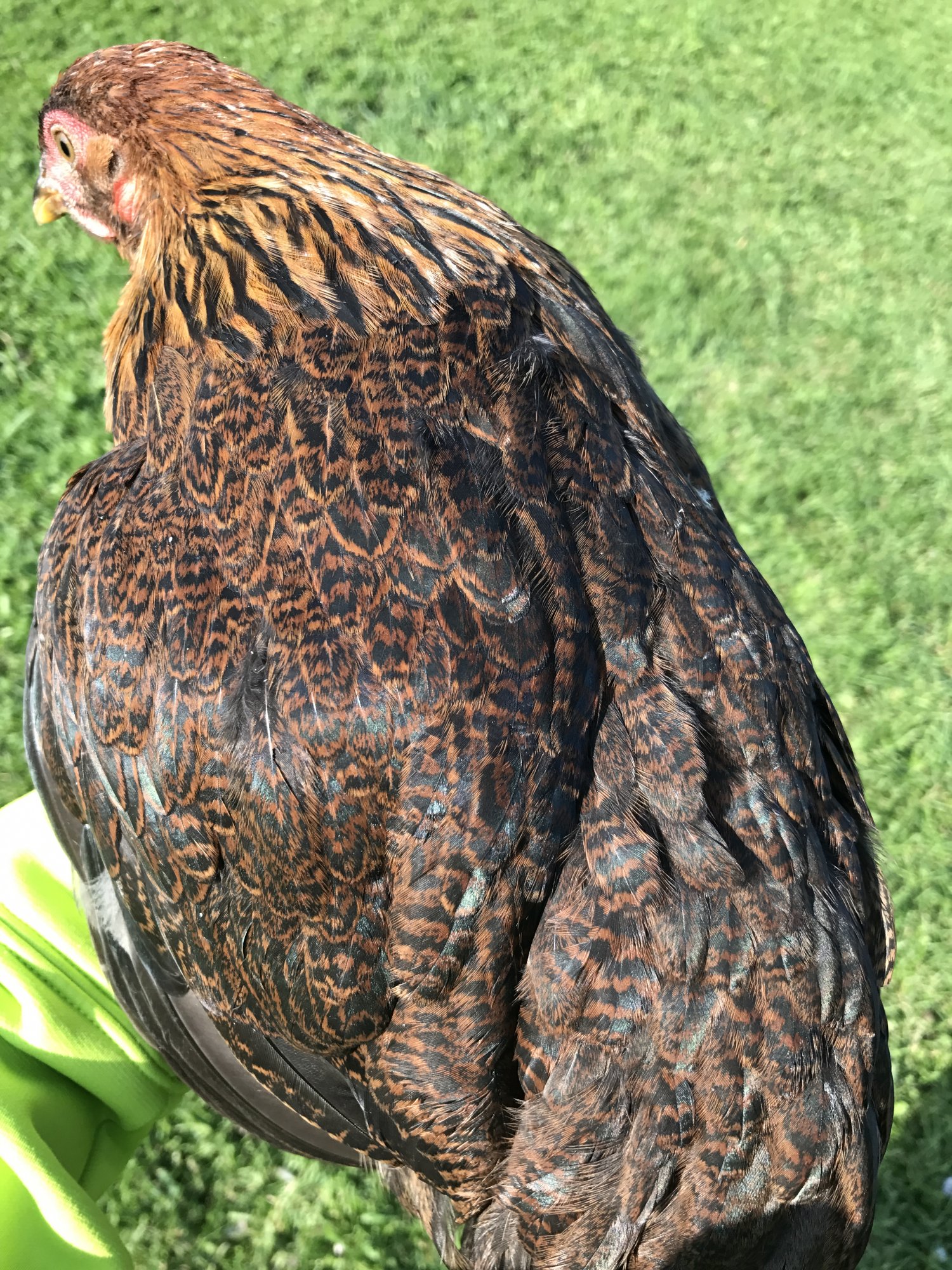 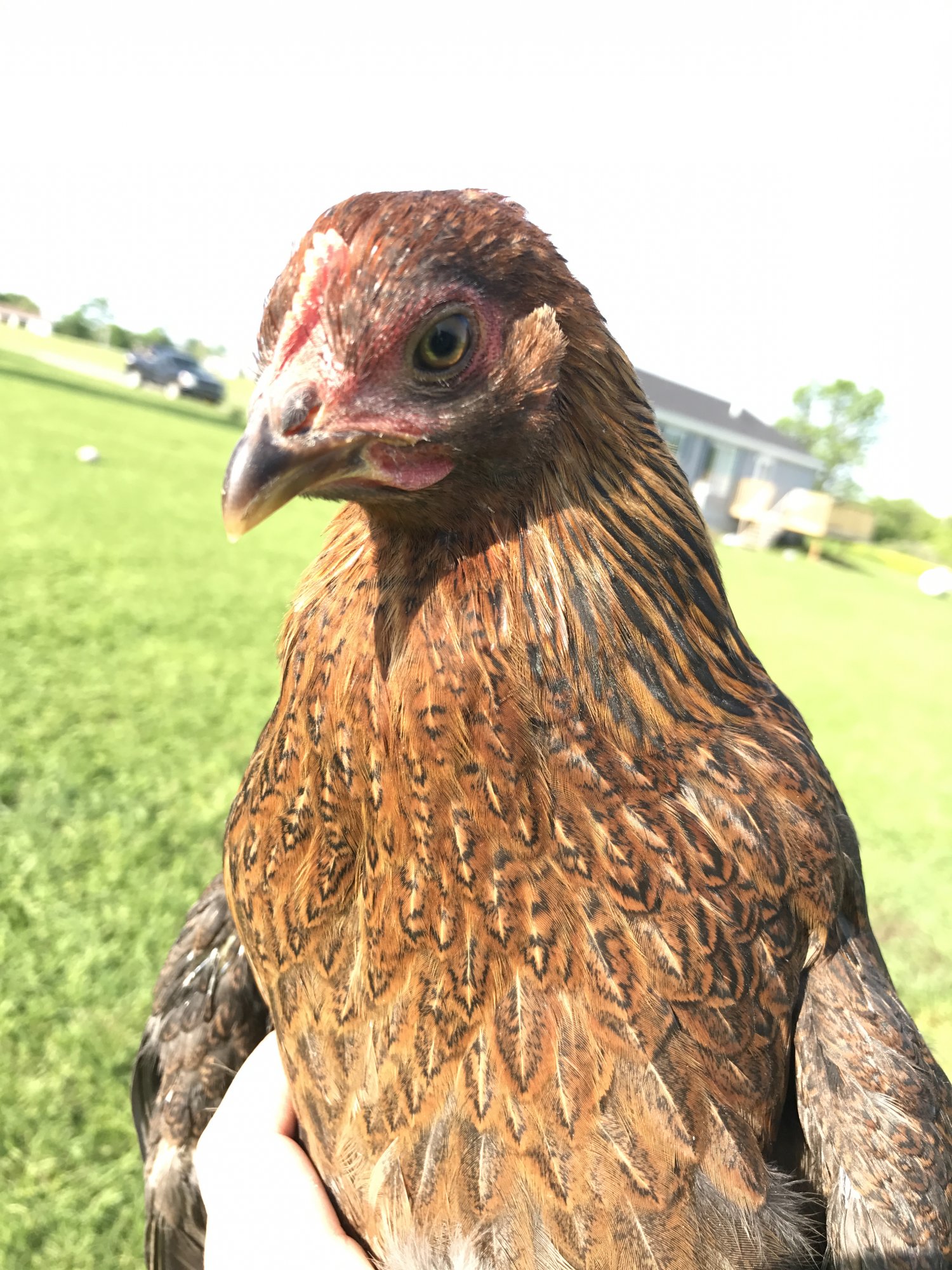 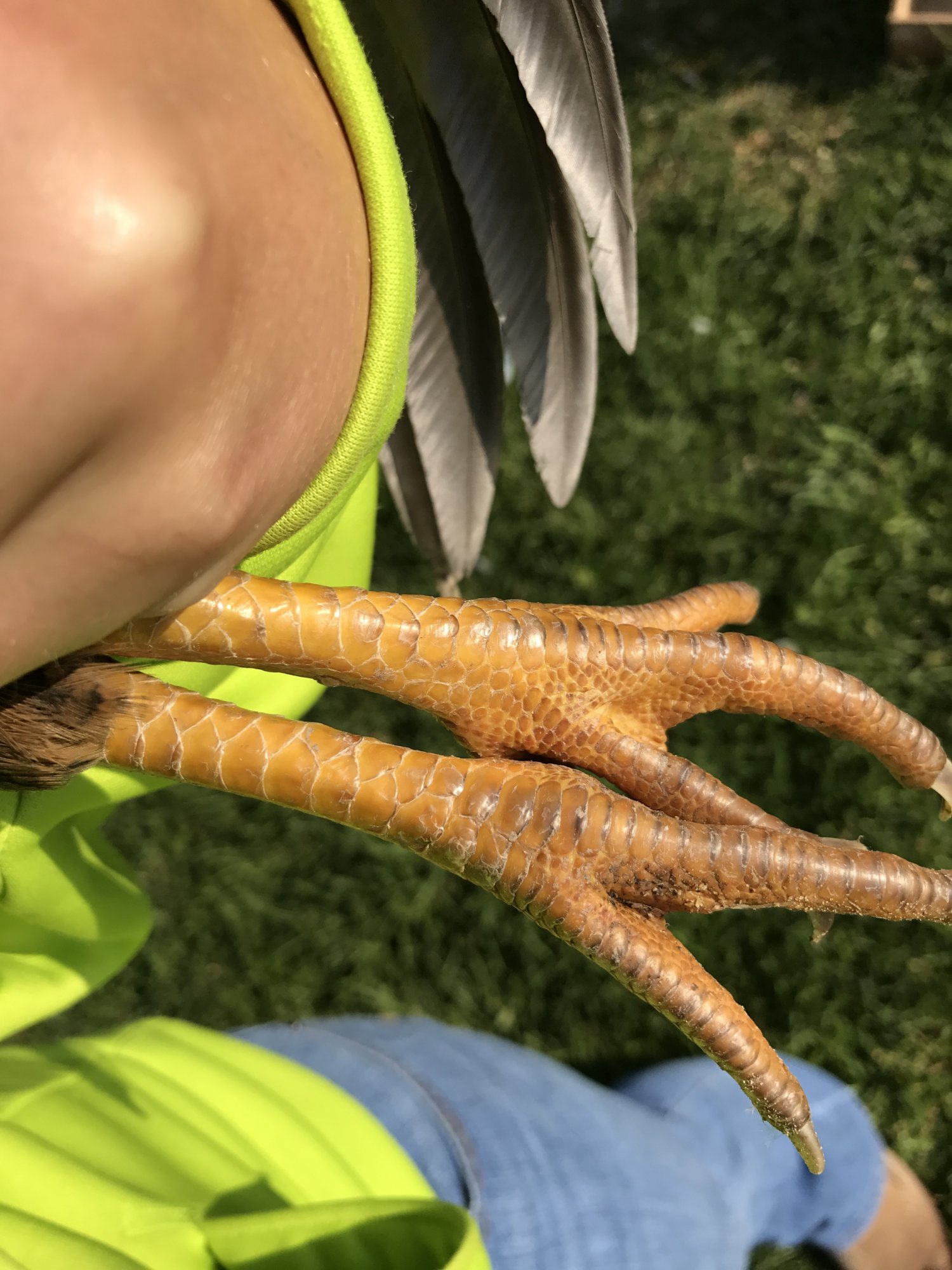 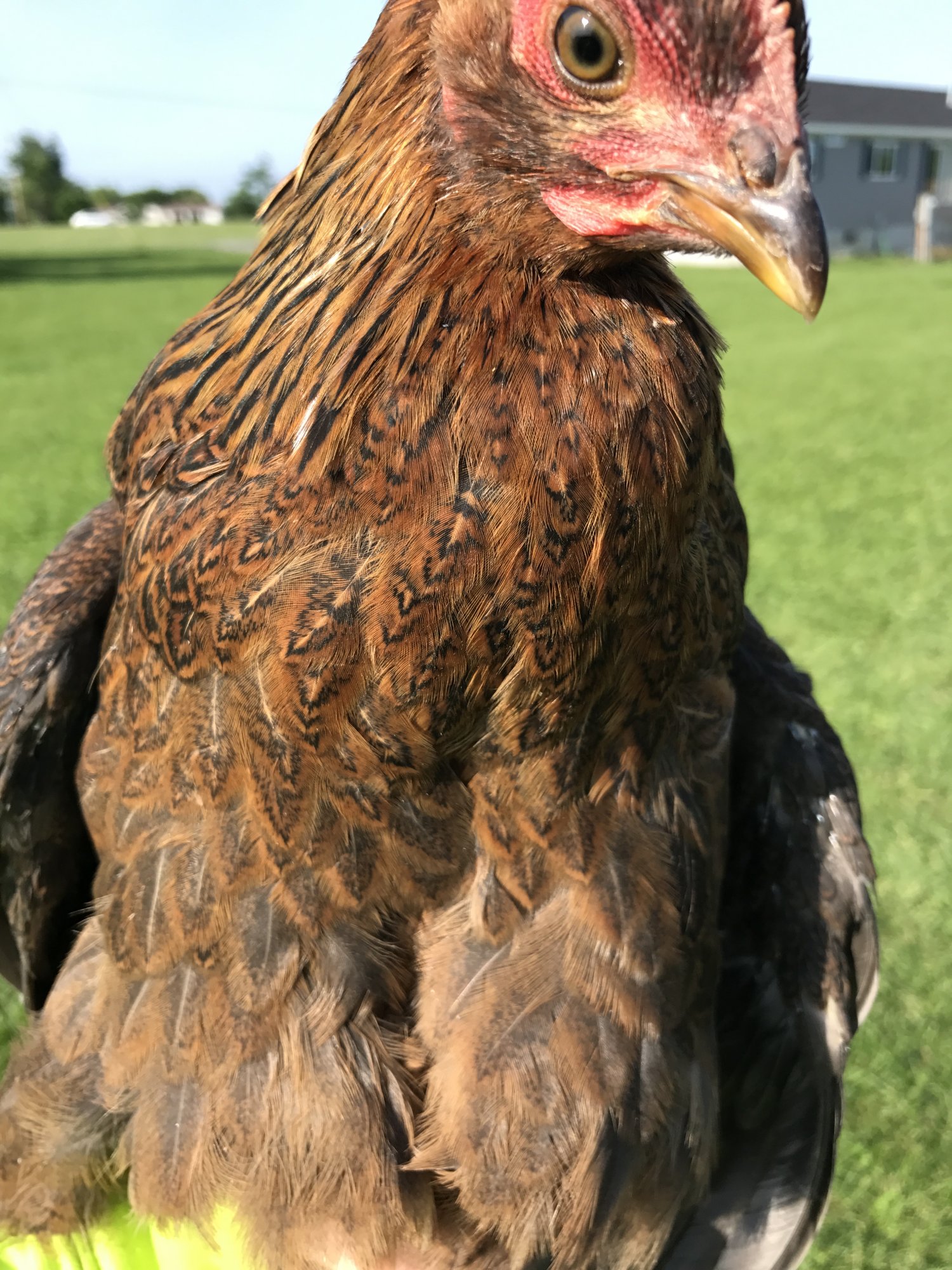 I personally think it looks exactly like the welsummer shown in the default photo on Meyers website. That's what I'd go with.

Its a Wellsummer pullet i have two myself and just figured it out.

@jwyles and @Mountainbeauty yoire taking about the one with the funky feathers, right? I'm happy she's a Welsummer! Any ideas on the other one?

Is this an Easter Egger?

Meyer Hatchery Assortment What are these two bllue girls