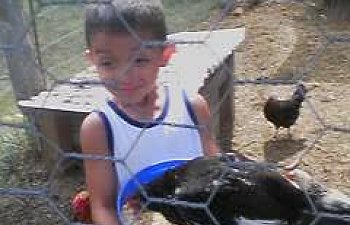 ​
Welcome to my page!
Anthony Deters, Mocksville​
This is my first undertaking of this type. I hope I can get many useful tips and information from all of my newest friends! A year and a half ago I was given 13 chickens from my neighbor for my 5yr old son. We started out kinda slow. I didn't know a lot about raising chickens and my father said he couldn't remember a lot either from his younger days! Although he did remember how to make a "Chicken Gigger" as he called it. (A VERY useful tool as I found out later.) It is used to catch a chicken that does not wish to be caught and does not harm the chicken. Anyone wishing to know how to make one, I will be posting assembly instructions later. 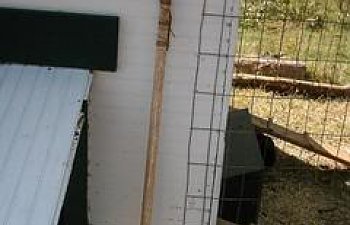 I have various types of chickens and do not really know the breeds that well yet. So any help identifying would be greatly appreciated!
Also, I have pictures of all the coops I had from the start till now. These chickens have been moving up in the world! They started out in a crate that I modified and put on stilts. 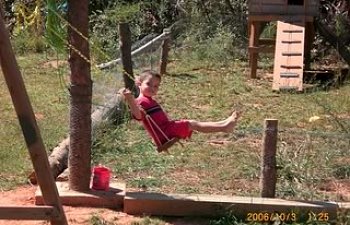 This is the first coop in the corner of the pic. Found out quick that we needed a cover over the yard! Good news... they all came back at night to roost!!

After they grew out of this one I used old fence panels and constructed a larger, roof raising coop for them. 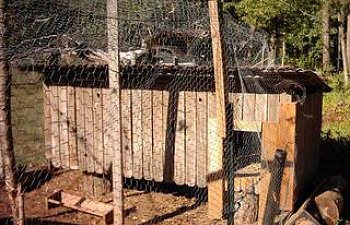 Finally, I bought cull wood from my Lowes store here in Mocksville, where I constructed this newest of the coops! 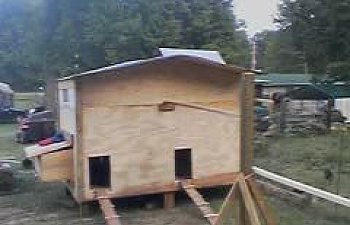 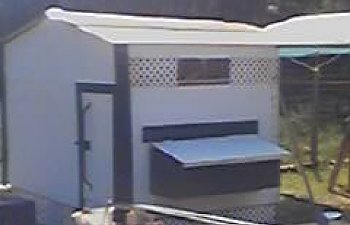 This is the newest coop. I don't have any pics of the beginning construction, they were deleted from my computer by accident. But I do have some of the mid to finished stages. No real plans, I just went from what I saw in my head. It is roughly 6 feet by 8 feet by 5 foot 5 inches at the peek (inside measurements). There are 4 laying boxes inside the small box on the side. Vented windows w/ sliding plexiglass for when it gets cold. There is still some fine tuning and touch ups to be done, but for what it is, it's done. If you want plans, I could draw some up for you. Just ask.
The yard is roughly 50 feet by 8 1/2 feet. Totally enclosed. There are numerous perching areas and a swing for the little curious chicks and one young at heart rooster, (He's not anywhere near young though.... legs like logs...lol) That like to swing.....
Here are some more pics of the coop as it was being done and up till now. 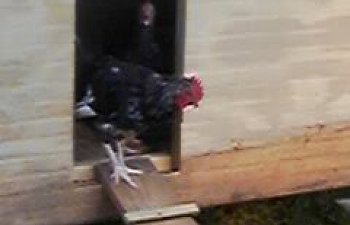 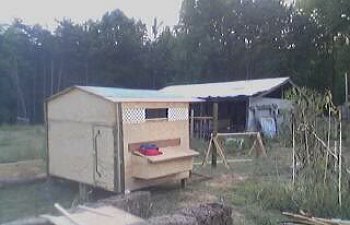 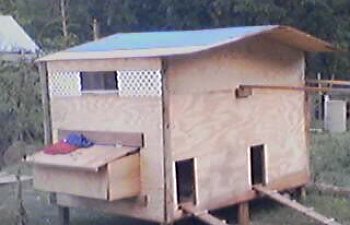 I had some new tennants before it was even done. The laying boxes had been in for about 3 hours and I had my first three eggs! I took it as a good sign...lol 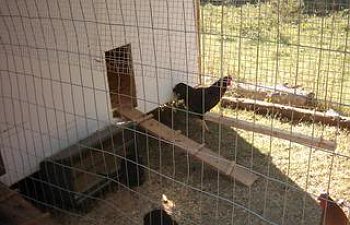 
Here's "Big Boy" He's the oldest around 3 yrs. Gift from the neighbor. "He's too old to eat, but keeps the girls happy!" With that he joined the family.​