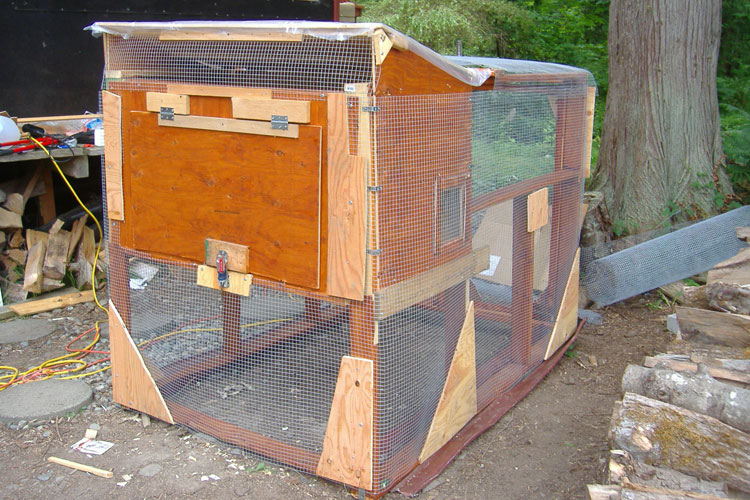 Chicken Tractor the Third: The Hyperion

It feels like I've been working on the third chicken tractor for years. Even though, it's only been a month. I probably would have finished it sooner, except that I broke my wrist halfway through, and had to complete construction with just my left hand.

But it turns out that carpentry is just like knitting. If you work on it for half an hour a day after work, eventually it gets done. Many trips to Home Depot were required, much mosquito repellent was applied, and I accumulated more sawdust inside my wrist brace than seems medically warranted. But now it's finished!*

​
After due consideration, I have decided to name this chicken tractor The Hyperion. Because it too is the third location. And it too is the best. And because I'm a dork that way.

​
Here you can see that the feeder and waterer are secured to the wall by lengths of wire (stripped from the inside of a length of unused Cat5 cable). I also fastened a scrap bit of bird gutter guard to the wall above them.

​
Continuing our tour outside - why, what's that? Could it be? Yes! It is a chicken door set on the wall of the coop. Because as every fool knows, chickens don't like to go up and down through a hole in the floor. (Pause for tired sigh.)

​
Here I'm demonstrating the process for opening and closing the door. From the outside. in such a way that chickens can't escape when I do it. Genius, right?!

​
Moving around to the back (the end opposite the coop) we find a people door which is hinged on the side. Because as every fool knows, if you hinge the people door at the top, when you open it to go inside, chickens can run out the side opposite you. (Pause for another tired sigh.)

​
I have to say, this is the design feature I'm most proud of, and most sheepish about. My neighbor had a length of gutter ripped off her roof during the winter storms. For months I tried to convince her that the (flattened, bent, thoroughly mangled) gutter was garbage and should be thrown away. I finally managed to successfully move it to a scrap pile to be hauled away to the metal recycler.
And then guess what?

I realized it would work really well as skids. It does, too.

You should have seen me slinking out to the scrap pile to dig out those trashed gutters.
Anyway, since my broken wrist is directly related to skid friction problems, these gutters should be a pretty big improvement.

​
Here are the ladies, back in their old coop. Do you think they realize they are all about to be stuffed into a single "small dog" carrier** and taken across the lawn to be deposited in a new coop? Actually, they might. They are displaying Suspicious Necks.

​
Martha says, "Hey! How the hell am I supposed to jump on top of the waterer and knock it over and spill a quart of water in here?"
* Actually, I can't say that it's "finished." But it has chickens in it, so I'm calling it done, even though it still needs a few more hours of work.
** I was going to take them in two trips, I swear, but once I got in there, it was just too easy to cram them all in. It was only for a few minutes, honest.

oHHHHH. you TOTALLY crack me up! Love your descriptions!
No photos. Here's the error:
Not Found
The requested URL was not found on this server.