Leave a rating
Cocky, the Most Dangerous Rooster in Spain

'Cocky makes himself at home'

​
Joe carried the box to the orchard, I pulled open the gate, and we stepped inside. As usual, the girls crowded to meet us. They eyed the box suspiciously. Joe set it down on the ground, pulled back the cardboard flaps and lifted out the newcomer. I gasped.
Only ten inches tall and about half the size of the other chickens, Cocky was exquisite. His feathers were an iridescence of colours, like an oil film on water. Mainly silver and lavender, they shimmered with different hues as the sun caught them, luminous and gleaming. His comb was crimson and exaggerated, as was his matching wattle. The tips of his wings touched the ground, slightly spread like the fingers of a hand. His tail was very upright and showy, while his feet were as bright as his comb.
It was difficult to say who was the most astounded by this flamboyant little creature, the chickens or I. Mala, Attila the Hen, Ginger and the others circled him warily. Fraidy gave off a nervous alarm call.
“He’s amazing,” I said, “but the girls are going to make mincemeat out of him. He’s tiny!”
Joe stepped back and the chickens leaned forward to examine this extraordinary spectacle more closely. They towered over him. Cocky totally ignored his audience, stretched (not) very tall, pointed his beak to the sky and crowed.
The chickens were outraged! United in fury, they dived on him with shrieks of indignation, cutting him off in mid-crow. But Cocky was quick. He blasted out of the melee like a feathery cannonball and shot across the orchard into a leafy bush, sixteen angry chickens on his tail.
“They’ll kill him!” I said, hand to my mouth. “Do you think we should rescue him?”
“Just wait,” said Joe, but he sounded worried and was scratching himself down below, a sure sign of nerves. The bush shook, rattled and convulsed as the battle raged in its centre. Detached leaves flew off as the branches whipped and thrashed. Enraged squawks and screeches ripped the air.
Suddenly, without warning, one of the No-Name Twins catapulted out of the bush like a piece of soap in a shower. Then Mala, Ginger and all the rest. Even Attila the Hen flapped out, righted herself and began to preen furiously in an attempt to regain her lost dignity.
Finally, out strutted Cocky, the unlikely champion. He rattled his feathers, flapped twice, stood on his tiptoes and crowed victoriously.
“Would you believe it?” said Joe. “He beat the lot of them!” He was indecently pleased by Cocky’s victory, perhaps as he saw it as a coup for males in a female dominated world.
But the show was not over. Joe was about to be taught a lesson in stamina that may have left him feeling a shade inadequate.
Cocky sidled over to ginger who was innocently pecking away at something microscopic. He executed a little side-stepping dance towards her, then quickly clambered aboard. No easy feat as Ginger was twice his size and not co-operative. However, he hung onto his object of desire by seizing the feathers on her head.
Ginger succeeded in shaking him off but Cocky’s ardour was not cooled. He repeated his performance systematically with every chicken, and there were sixteen of them. When every chicken had been covered, Cocky just started again, jumping onto whoever was closest at the time.
“That little fiend certainly has stamina,” said Joe. “He must be exhausted!” (Did I detect a tiny note of envy in his tone?)
From that day, the dynamics of the orchard changed dramatically. It seemed size didn’t matter, after all. The girls adored their new leader, even though he was so small. Wherever he went, his harem followed, shadoweing him like disciples. At dusk they clamoured to roost next to him and bickered amongst themselves to share his perch.
And the crowing! He never stopped. He crowed all day and often during the night, too.
One of the villagers, Old Sancho, still took his evening walks through the streets of the village, his black cat scampering at his heels. We heard the distinctive tapping of his stick accompanied by the usual fruity bursts of flatulence as he rounded the corner. So did Cocky, who would crow loudly. Old Sancho would approach the fence, lean on his stick and crow in reply. This infuriated Cocky who would crow louder and longer, standing on tiptoe for maximum effect. And there they would stand, the fence dividing them. Ten inches of feathered fury and the old man in his worn carpet slippers, each crowing at the other.
Eventually Old Sancho would get bored, smile benignly at Cocky and call to his cat. Off he shuffled, ‘tap, tap, paaarp, tap, tap, paaarp’, up the road. Cocky, satisfied that he had won the crowing contest yet again, strutted back to his adoring wives.
The villagers were fascinated by Cocky, or perhaps they just wanted to see the source of the endless crowing. There were a few cocks in the village at the time, but Cocky was easily the most handsome, the smallest and definitely the loudest.
And Cocky had some endearing habits, too. Whenever he found some particularly delicious treats, like an ants’ nest, he never ate them himself. Instead, he would emit an extended, high pitched chirrup, ‘tkk, tkk, tkk, tkk’, to call his wives. They would stop whatever they were doing and career over. Then they vacuumed up his offering while he proudly stood by.
Although he was so much smaller than his wives, he had another trick that ensured his popularity. He would half fly, half jump to reach tasty fruit or new leaves. The prizes were pulled down and he would triumphantly call the girls, ‘tkk, tkk, tkk, tkk’. His harem gobbled up the treats as he watched over them like a benevolent uncle.
All was well, but, sadly, not for long.
It was Ginger who first alerted us to a serious, growing problem... 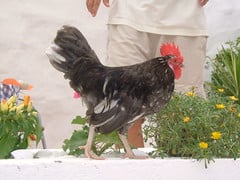 If you are enjoying this story, please let me know and I'll paste up the next part.