Leave a rating
Cocky, the Most Dangerous Rooster in Spain​
​
​

'Judith Suggests Cauliflower'​
​
(Just to explain, Judith and her mother live in the next village. ​
Judith is in her sixties, a very upper-class and no-nonsense type. She has 10 dogs and looks after 'Mother' who is in her 80's. ​
Mother doesn't speak much but loves to dress up in outrageous clothes and flirt, in spite of her age.) ​
​
​
​
​
​
“Phone Judith,” said Joe. “She may have an idea.”

I reached for the phone and dialled Judith’s number. Somebody picked up the receiver and spoke, but it sounded as though they were talking through a cushion. I could hear several dogs barking so I was pretty sure I had dialled the right number.

“Hello, is that you? Judith? It’s Vicky here. Are you okay? You sound really strange.”

A short silence, then fumblings, then Judith’s voice, loud and clear.

“Vicky? Hello, there. Yes, dear, of course I’m absolutely fine. Mother answered the phone and she’s got a kiwi and porridge face pack on at the moment. Face is as stiff as a board. Can’t talk properly. Now, how can I help you?”

“No, he’s fighting fit. That’s the problem.” I described Cocky’s dreadful behaviour and his latest battle with Miguel.

“…and so we’d like to re-home him, but we don’t know anyone who would take him.”

“Vicky! What utterly beastly behaviour! I can see the problem.” There was a note of admiration in Judith’s tone. Cocky had that affect on people; whatever ghastly crimes he committed, they were still in awe of the little devil. “Leave it with me, and I’ll have a chat with Mother when she’s scraped that gunk off her face. I’ll phone you back later.”

I thanked her and replaced the phone in its cradle. I could clearly picture the scene at Judith’s house. Mother floating around in a silk negligee, with face mask, Judith in her tweeds and the dogs and cats generally creating havoc. A typical day at Casa Judith.

Later, as promised, the telephone rang.

“Vicky? It’s Judith.” Who else could it be with a voice that cultured and strident?

“Thanks for getting back to us, Judith.”

“Well, dear, I think Mother has solved your problem.”

“Sorry, Judith, it’s a bad line. Did you say ‘cauliflower’?”

Joe was listening and rolled his eyes at me. I turned away, trying to concentrate on Judith’s words. I agreed with Joe. How could feeding Cocky cauliflower calm him?

“Mother knows someone who’ll have him. Free range, don’t you know. Oodles of space for Cocky to run about in.”

“That’s brilliant news! But what did you mean about the cauliflower?”

“That’s his ruddy name, dear. Cauliflower. He’s a Brit, and Mother says he’s always been called that, though most people call him ‘Caul’ for short.”

“Mother’s already given him a tinkle on his mobile, dear. He’s one of those New Age chappies. No electricity, no mains water. Lives in a commune in a valley near Lanjarón.”

I scribbled down the directions Judith gave me and turned back to Joe. Joe raised his eyebrows, waiting for me to speak.

“Well,” I said, “I think we may have found Cocky a new home. He’s going to join a hippy commune.”

“Well, at least if he misbehaves they won’t eat him. They’re all vegetarians, aren’t they?”

Outside, Cocky crowed, oblivious to the fact that tomorrow he was to become a flower child and live with a man named Cauliflower.

As Joe and I drove towards Lanjarón, we could be forgiven for thinking that Andalucía was as close to paradise as is possible. The craggy mountains jutted against the sky, serving as a backdrop to the ancient whitewashed villages that appeared frozen in time, barely changed since Moorish times.

It would have been an idyllic drive if Cocky hadn’t crowed every few minutes from within his box.

“So how does Mother know this Cauliflower bloke?” asked Joe as we approached the reservoir below Lanjarón.

We winced as Cocky crowed again, then marvelled at the expanse of water laid out before us. Lanjarón is famous for its bottled water. We trailed behind a convoy of lorries making their way towards the bottling plant.

“He will.” I was confident. “And he’s getting two of Cocky’s wives. The No-Name Twins are great layers, he’ll welcome the three of them with open arms...”


If you are enjoying this story, please let me know and I'll paste up the next part. 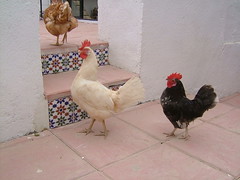 Enter the FREE prize draw to win a signed copy of 'Chickens, Mules and Two Old Fools' on the website. ​