Leave a rating
Cocky, the Most Dangerous Rooster in Spain​

'Cocky Misbehaves'​
​
It was Ginger who first alerted us to a growing problem. When we took our cups of coffee to drink in the orchard, Ginger usually perched on the arm of the old yellow sofa and chatted to us. This irritated Cocky no end. He was growing bolder by the day, and was clearly not happy to allow Ginger to consort with us. He resented our very presence and his body language left us in no doubt. Neck feathers bristling like a bottle brush, he faced us, hurling insults.
“What’s the matter with him?” I asked. “Why is he always in such a bad temper?”
“Oh, he’s just protecting his wives,” said Joe. “He doesn’t want Ginger to talk to us, that’s all. He thinks we’re after his women.”
Maybe so, maybe Cocky was just following his instincts, but it was very uncomfortable. And his behaviour worsened as he grew in confidence. Collecting eggs and feeding became a problem and Joe took to carrying a stick to fend off the ten inches of feathered fury. We abandoned the yellow sofa and spent as little time as possible in the orchard. Chicken husbandry became a chore, not a pleasure.
“I think we should call him ‘Quilp’,” said Joe, “after Mr Quilp in Dickens’s Old Curiosity Shop. He was a malevolent dwarf just like Cocky.” But Cocky’s name had stuck although it was often preceded now by a choice word of Anglo Saxon origin.
It all came to a head one day when one of the villagers, Teresa, brought her husband with her when she came to purchase eggs.
“Miguel has seen an old box in your orchard,” she said. “It’s like an old packing case, no? Miguel likes old trunks. Do you want it, or can he take it?”
“Of course he can take it,” I said. “Everything in the orchard is rubbish, stuff left by the last owner. Help yourself to anything you want.”
“Help yourself,” agreed Joe. “You’re very welcome to anything you want, but be careful of Cocky. He’s really aggressive.”
“What, that little thing?” laughed Miguel. “¡Hombre! He barely reaches my ankles!”
Joe and I exchanged knowing glances, but Miguel would not be put off. He strode off to the orchard before we could warn him further. Teresa, Joe and I carried on chatting about eggs, the rising price of bottled gas and who would be elected the next Mayor.
“What was that?” said Joe suddenly, holding his hand up for silence. Teresa and I stopped and listened. Then we heard it too. A distant cry of “¡Ayúdeme! Help! Help!” filtered down to us.
“Miguel!” said Joe, horrified, and galloped off up the street with Teresa and I hot on his heels.

Poor Miguel had never even reached the old trunk. No way was Cocky going to allow an intruder into his territory, a threat to his harem. He circled his human enemy, screaming insults, his neck feathers spiked out to twice their normal size. And where exactly was Miguel?
“¡Madre Mia!” gasped Teresa.
Our jaws dropped. Miguel had rolled himself up in a discarded cylinder of chicken wire. He stood upright, clutching the edge of the wire like a lady holding a towel around herself to shield her nakedness. Little trickles of blood dried on his legs where Cocky had managed to rake him.
Cocky was a whirling dervish. In perfect fighting-cock stance, his body was scythe shaped, airborne, with talons and spurs extended and sharp beak stabbing. Again and again he attacked, furious feathers bristling as he fought to rip his enemy to shreds. Thankfully, the roll of chicken wire protected Miguel from further injury.
We unwound and rescued the poor man and apologised profusely for Cocky’s appalling behaviour. Teresa bathed the cuts on her husband’s legs and I gave the couple a dozen eggs, refusing payment.
By now Miguel had recovered from the shock and was reflective.
“Well, you did warn me. ¡Madre mia! What a creature! Never have I met such a fierce little…” Words failed him.
The chest that Miguel had wanted was rotten and dotted with woodworm. It was the one that Joe had sawed an entrance into for the girls to lay their eggs. Unsurprisingly, Miguel refused it and left, still muttering and reliving the experience.
Joe and I sat down at the kitchen table for a conference.
“This can’t go on,” I said. “Cocky is a demon. What if a child wandered into the orchard? Cocky would rip a child to shreds.”
“I agree. He’s getting worse by the day. I don’t see how we can keep him.” Joe was depressed. Cocky may have had a filthy temper, but he was an awesome character.
“Who would take him?” I asked. “Who’d take a manic little cock who’s convinced everybody wants to steal his wives? I know he’s only acting on instinct, but he’s positively dangerous.”
“Phone Judith,” said Joe. “She may have an idea...”


To be continued...
If you are enjoying this story, please let me know and I'll paste up the next part. 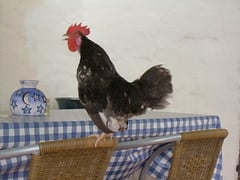 Enter the FREE prize draw to win a signed copy of 'Chickens, Mules and Two Old Fools' on the website.
​