Article Gallery
Leave a rating
Soon we will be starting coop, boyfriends house so he's deciding what it will look like which is fine for me....he said he has some ideas of one that actually looks like a garden room. I showed some pictures and he based it off of that one. Ill have to find where I found it on the internet and upload it to show you. Should be pretty neat and be kinda incognito. Though, hopefully he starts it soon as chicks are growing way too quickly. Don't think he realizes how fast they grow!
Ok, here's the coop and run but the coop now is painted and pretty much done. The run having some problems with trying to keep it from being soggy wet during rainy season but hopefully something will work out soon as the chicks arn't too much chicks now. Update: we were going to be building at boyfriends house but decided to go with my house as I can take care of them better here. Boyfriend likes to work with me building stuff so this has been a nice project together. Chickens are gonna be so happy to get out of that little pin and into this one 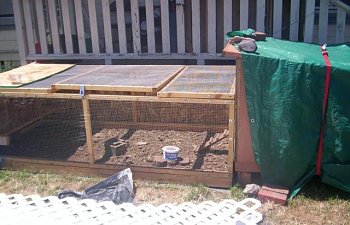 ok, its not complete but workable. Roof still not done, see the crank tightener to keep lid on and safe from preditors. See the three parts to the run top? Each one opens individually so I can get in with out as much worry of them trying to get out, each locks shut. Piece of wood on end top of run to keep shade in, they don't care for full hot sun. My window is off to the left of the picture. I sleep with window open and can hear anything out there, I am light sleeper...usually. Hope to clip birds wings so they can run the yard some, I cant chance them flying into neighbors yard.