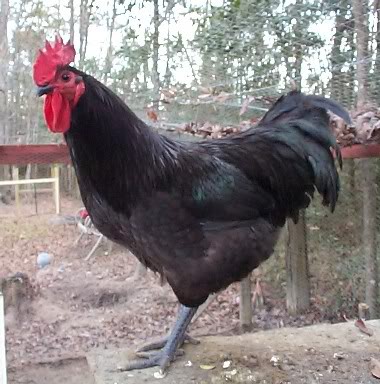 Jersey Giants​
History
Jersey Giants are the largest purebred breed of domestic chickens. The breed was created between 1870 and 1890 by brothers John and Thomas Black in Burlington County, New Jersey. Their original intention was to breed a large table bird that could take the place of a turkey. The breeding program included Black Javas, Black Langshans, and Dark Brahmas. In the beginning, they were called "Black Giants", actually being named after the brothers and not their initial color. The name "Jersey Giant" came into official use in 1921 when the American Association of Jersey Black Giant Breeders Clubs was created. The breed was officially recognized by the APA in 1922. There are now three recognized colors -- black, white, and blue. Blue was developed from a white hen with gray smudges (a sport) in Golda Miller's flock sometime in the 1980's. Splash are produced by breeding two blues, but are not a recognized color. Jerseys as a breed are very gentle and friendly. 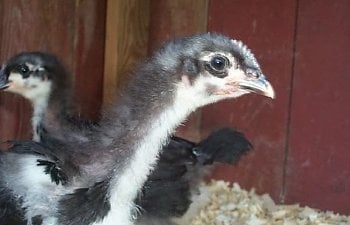 Because Jersey eggs are large, sometimes they will take 1 or 2 extra days to hatch. Chicks have a "tuxedo" pattern -- their heads and bodies will be either black, blue, smokey or pale blue (depending on the color), and yellow from under the chin to down the belly. When the primary feathers come in, it is the rule rather than the exception for the darker colored chicks to have white feathers in the wings. When the chick gets its adult feathers, these will fall out and grow back in the same color as the rest of the bird.

The legs will have some coloring on them, but it may not reach the toes. This is common, and the color will fill in as the bird matures. From the beginning, all colors should have dark brown to black eyes and yellow bottoms to their feet. Dark chicks may have pale beaks with streaks of color. These too will darken with age.
​
Chicks tend to mature slower than other breeds due to their size. For the first 6 months, they are primarily growing their skeletons to support their adult weight. At six weeks, they are about the same size as other breeds, but from there you can perceive that they are getting larger. At about 4 months they are gangly and kind of thin, but by 9 months they have started filling out their muscles. I have read this is about the age they are ready for the table, but mine have never had much meat on them at this age. Jerseys reach their full adult weight between 18-24 months.

Both sexes have single combs, and the comb, wattles, and earlobes should be red. Feathers should be of a single color without any red or yellow present, and black and blue birds cannot have more than 1/2 in. of positive white showing on the surface. The skin should be yellow, as also the bottoms of the feet. Sometimes they're pink, which is a fault, and makes it hard to differentiate a Black Jersey from a Black Langshan, which has pink bottomed feet. Eyes should be dark brown to black. Eyes that are mottled or bay are a fault. Beaks for black and blue should be black with the tip of the beak showing some yellow.

Roosters have a deeper crow than other breeds, and are impressive the first time you hear one!
Hens lay large to extra-large brown eggs that are pale cream to dark brown in color. They tend to start laying later than other breeds. They may go broody, but aren't very successful at hatching young. Mine have gone broody, but they end up breaking the eggs because of their weight. It's recommended to incubate any Jersey eggs you wish to hatch.
​ 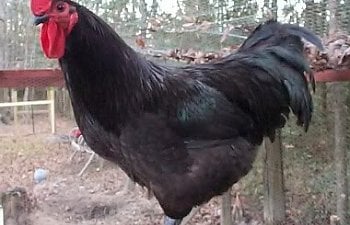 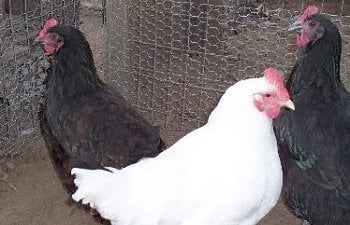 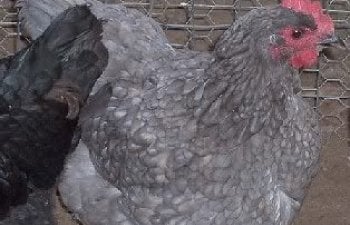 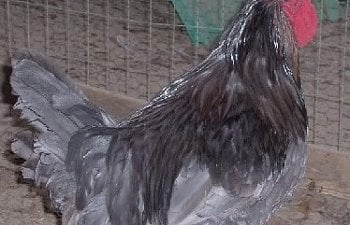 Duke, my two year old rooster. He's pretty stout and heavy. Duke is nearly as large as my tom turkey. 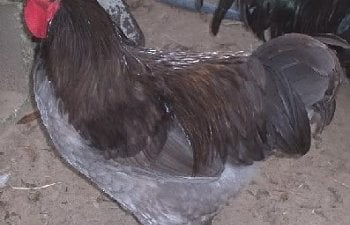 Bishop. You can see that he's not near as heavy at 6 months.
​
Color Genetics:

Jersey Giants black color comes from the dominant black gene, meaning that as long as you are using all black birds, you will get nothing but black birds. Occasionally, you will get some brassy or colored feathering in the neck, hackles, or tail, and this is considered a fault. I never used these birds to breed with because I didn't want any new chicks to carry on this fault. Adults should have a green sheen to their feathers.

White Jersey Giants are actually recessive white, meaning they need two copies of the white gene to make a white bird. They were bred specifically for this, since recessive white produces a clean color. This is also why the chicks have the smoky yellow color instead of bright yellow. It will not yellow out as easily as dominant white, and prevents other colors, such as black and red, from bleeding through. Essentially, it prevents a mottled color. If white is bred to black, only black birds should result. If you breed any of the black offspring back to the the white birds, as I did, you will get both black and white chicks, since the black offspring are carriers of recessive white.

Blue Jersey Giants color comes from the blue gene, which is an incomplete dominant, meaning that only one copy of the gene is needed to make a black bird blue. As long as you are breeding black to blue, you should come out with about 50% blue, 50% black. If you breed blue to blue, you will get 25% black, 50% blue, 25% splash. Splash means that the chicken has two copies of the blue gene, and will be a pale blue in color, rather than deep slate. I've found this particular color to be variable in Jerseys. Some will just be very pale blue, others may appear whitish with flecks and streaks of blue in their feathering. They're very pretty, but cannot be used for showing. I'm uncertain what would happen if you bred blue to white (I never did), but knowing that the white is a recessive gene, you would probably end up with blue and black offspring, since Jersey Giants' coloring is on a black base. (I'd appreciate some feedback on this...please leave a comment below!)
Reactions: Ruthster55, Trevorusn, NightingaleJen and 17 others

I didn’t leave this article with any questions unanswered, it was a clear and concise read and I couldn’t ask for anything better.
Read more…