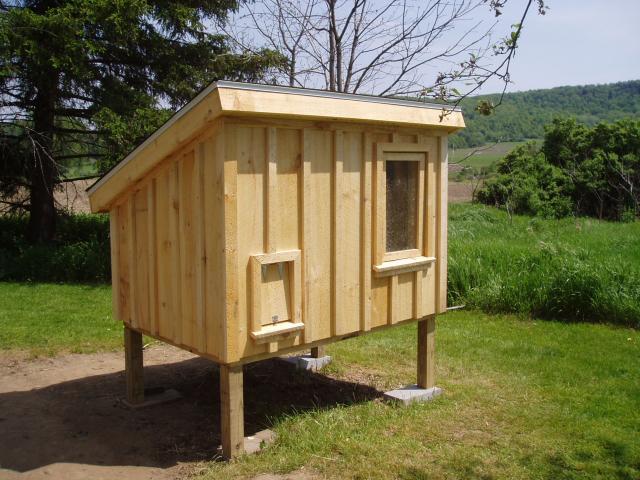 Here's my coop, some of the contruction of and a few extra pics of some inovations I'm using.

I built my coop kinda like a modular type home. All constructed separate, the base, rafters and each wall framed, adding interior sheathing and rigid insulating inside the garage. Then moved it all outside to the site for assembly. The base was placed on blocks, all leveled. Linolium was tacked down to the base and then the walls were secured to the base. Outside sheathing, rough cut batt and board, was added and all is trimmed out. Rafters in place and roof sheathing were also added. Initially I was going to shingle the roof so drip edge was added and tar papered as usual. Plans change later... Dryer vent in place to work with an exhaust fan, experimental ventilation??? Run was added. We get severe winters then normally so the coop and run is well pitched to shed snow. This type of roofing was a change in plans instead of shingles. note: The window faces south to take advantage to a low winter sun. Coop roof is pitched to the north and the run to the west, to fend off the weather. I designed the run to wrap around the coop to fend off the weather again and to keep the pop door undercover. Roost in placed, 2x4 on flat side to help the birds to keep feet warmer this winter. The 2x3 perch is just to help them ease into the nesting boxes. My space saving feeder...I did modified it a little from other examples on here. Two fill tubes at each end to hold more feed and to keep the holes full easier. Hung it by a couple of screws for easy removal for cleaning and used 3"to 4" coupler as a funnel for easier filling.The tube with the holes is not glued in place, it can be rotated to face the holes as needed or to removed the tube and replace with another tube with some other configuration. Space saving waterer...The waterer joints are sealed, Atmosphere pressure prevents the water from running out. The cap kinda acts simular as your thumb on the top of a straw. You have to hold it horizonal to fill. The keyhole system makes it easier to take it down than bungies, wire, etc. My ramp is on a hinge to raise it up out of way while cleaning the run. Pop door is opened outside of the run by a string threaded through eye bolts. note: The run roost is positioned away from the sides to avoid predators. Also too small for all the birds to roost at once to discourage them from roosting in the run at night, which hasn't been a problem. Exhaust fan, no problems so far, effectiveness still to be determined??? This winter should put it to the test. I have been using the "Deep Litter Method", DE as needed and stir it up once a week with no problems, odor or otherwise.
I placed straw in the nesting boxes, they except it well. I received my first egg 08-19-09, found right in a nesting box.
I also have plywood panels that will be placed on the north and west sides of the run to keep the snow at bay to provide the birds more outside time this winter.

Any questions please feel free to contact me...
I also would greatly appreciate constructive criticism or advice on anything posted here.
Everything is subject to change, Thank You
Reactions: mapurcel, RebelEgger, trumpeting_angel and 4 others

This is an excellent coop. You obviously put a lot of care into it. The only thing is to give more clear details, such as what you used for the flooring, siding, ect.
Nice coop. Would like to see more details on the build. And I would replace the chicken wire with hardware cloth.

Monk
Thanks! I don't have much other details, it's basically a 4' x 6' raised coop. Hardware cloth is a good idea, I had a mink get in and killed four of my birds in one night. There is a swamp about 300 yards behind the coop and had a hedge row that ran from the swamp to the coop. But since then the hedge row has been removed there has been no issues with mink. If you do have any questions, I'd be glad to answer them the best I can. This coop has been in place for 11 years now, working as intended and everything is hold up well.
What are the dimensions of the coop and dimensions of the run? About how much did you spend in material cost? How long did it take you to build the coop and how many chickens do you have room for?
MiMi Feathered Fan
Reactions: slippednfell
Read more…

Great coop, I might be copying off you soon!
Looks great!
Could you give us some measurements?
How many chickens are using it?
like how the run is pretty cool coop!
very very cool how many chicken do u keep in here around 4
Does the waterer work well? Would it all spill out?
I really like this coop-great design

very nice, did you buy plans or did you do this on your own?
do you have a copy of plans
Wow, I'm super impressed with everything you've done. Excellent job!!
incredible - love it and the girls look very happy. thanks for sharing.
Would love to see pict of waterer being filled.. Not a great person to reason out some things but could you use 2 caps....one of them to cap the bottom while you are filling it and then maybe the second to put on the top when finished filled...and then take the bottom one off.. LOL I know its sounds like a lot but I'm trying to figure this out without having to handle it so much. Right not I use the nipples and have been somewhat satisfies but have to deal with refilling it.
good job ! wonderful
How's that keyhole attached to the watering pipe? Looks like smaller PVC pipe cut down, but how did you attach it? It would have to be very secure, as the main pipe would get pretty heavy when filled with water.
Very nice. What kind of fan did you use? Great job on the coop. Lots of good ideas.
I like how the run wraps around the corner of the coop.
Any plans or material list?

D
What are the overall dimensions of the coop, proper?

How many birds do you presently have?