Our Coop Inside The Barn 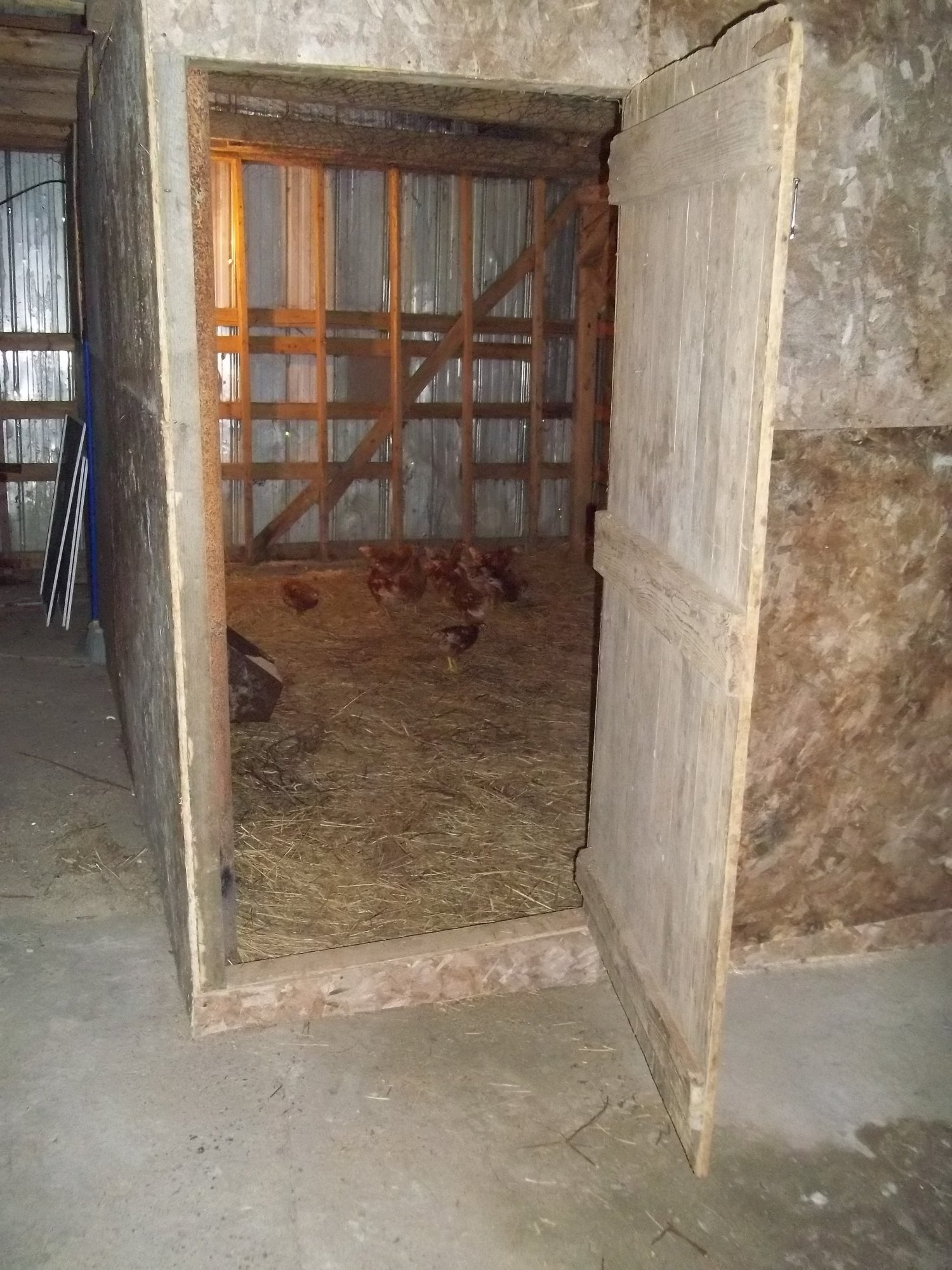 So when we decided to get 12 baby chicks....we started thinking where we would put the coop!
We knew it was going to go inside our large 150 year old barn...but we just were not sure where inside the barn it would go.
We had thought about just putting them in one of the stalls...but we use the stalls for cows, and our 'soon to be' goats...so we just decided to build! FINALLY when the chicks were 3 weeks old, we found a spot & started planning

Last week {when the chicks were 7 weeks old} we started building. {The chicks have been living in a brooder in the house....and growing huge every day!!}
My husband & a good friend of his started finding materials to use....we did not pay for one thing!! Everything we used was stuff we already had in the barn! The first wall {picture below} went up fairly quickly...we built one window on that wall for ventilation. The next wall was going to be tricky because it had to be built on a slop {the barn is old!...so the foundation isn't all that great!} In the 2nd wall we put another window for ventilation, and also the door {the door is something we found in the hay loft!...with big rustic hinges which I love!!} We only had to build 2 walls {the other 2 walls were already there} For the ceiling we used just chicken wire....{but for the winter months we will insulate the ceiling}
All in all....we think it turned out pretty good! There is about 130sq feet in there....since we do plan on getting more hens next spring, we wanted enough room in there for at least 25 or 30 hens {there is just 12 right now}
The walls are all made out of plywood or flake board....and any cracks or holes has been filled with cement. We have a huge Bull Mastiff named Cub that would love to 'play' with these chickies....so we had to make sure that not only we are able to keep Racoons out of there....but also our pet dog!! lol
The flooring is all cement, so it will make for easy clean up!
We haven't built the nesting boxes in there just yet, since it will still be awhile before they start laying. Also we haven't built a roost in there yet either....something we plan on doing this week! The outside run will also be built this week....so the 'girls' are patiently waiting for that! We have put in an old feeder that is original to the barn {seen here in the pic above} for their feed.
And we have made a water container out of a 5 gallon pail. They seem pretty content....and loving their new coop! They have lots more space now to fly around & run....much more then they had in the brooder!! Now to get a roost built....and the outside run! I will post more photos of them when they are finished.

Below is a photo of the sign I made for the coop! I own a Primitive/Antique gift shoppe....and make my own rustic/primitive signs! I also have one already made for the run as well! Just because its a chicken coop....doesn't mean you can't decorate it Having the coop inside the barn should help keep most predators out. It does seem dark in there, the author doesn't mention if the birds will be allowed to free range.
Read more…

You might want to rethink the chicken wire on the ceiling if you have any rats or other small rodents as they can fit through the chicken wire and will eat your feed and eggs. Otherwiaw the coop looks great and loved the door.
We don't have rats...mice we have seen in the barn. The chicken wire is just there for right now because we needed to get the chicks in the coop, as I couldn't stand to have them in the brooder any longer!!! lol
We are actually going to be putting tin over the chicken wire.
Looks roomy!