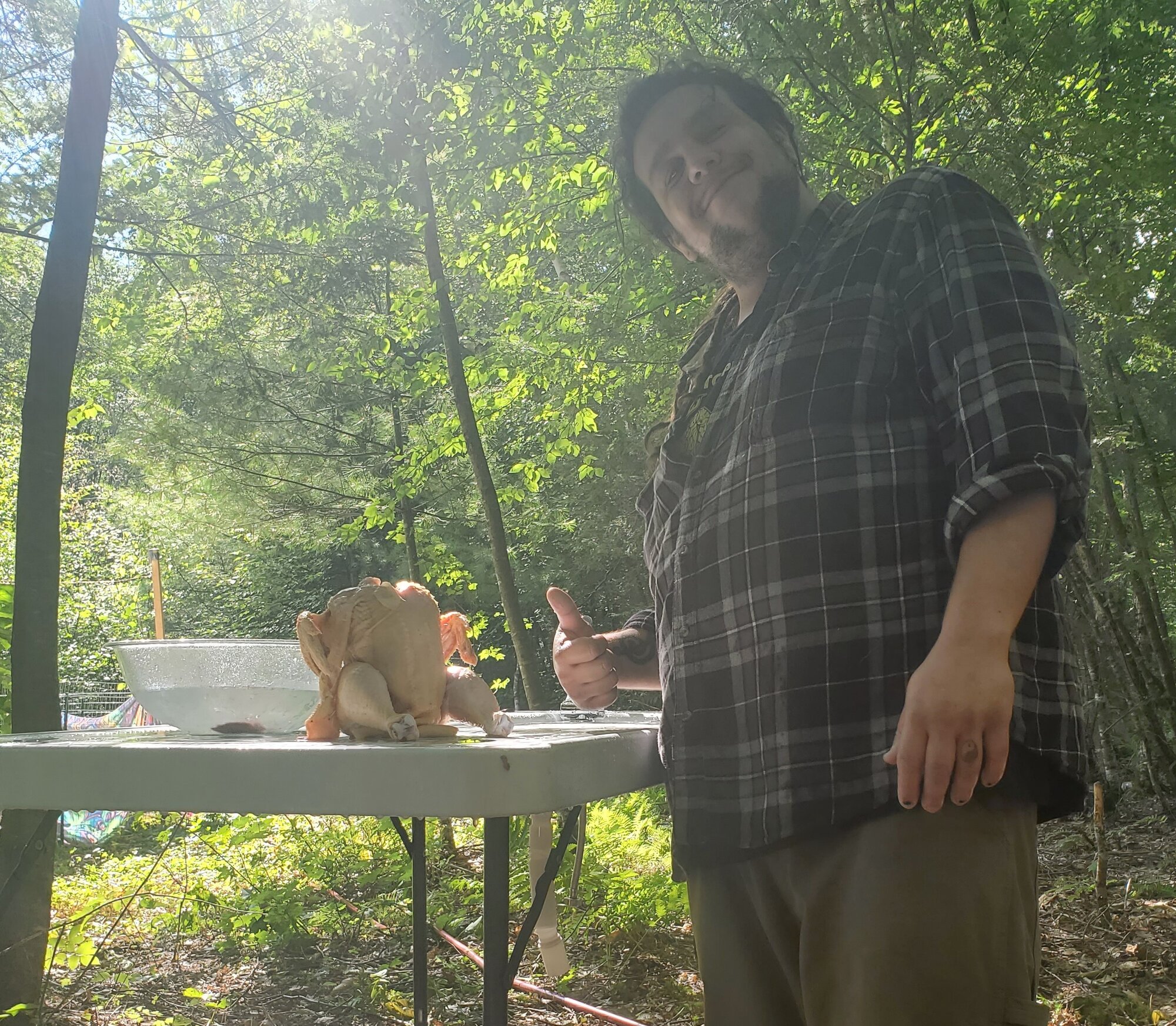 This is an overview of my backyard processing set up. Enjoy!
Equipment
First and maybe most importantly, knives. I only used 3 knives during the whole process. One was a butter knife I used for "finishing" those pesky pin feathers before I stuck it in the fridge. These are the two edged knives I used. 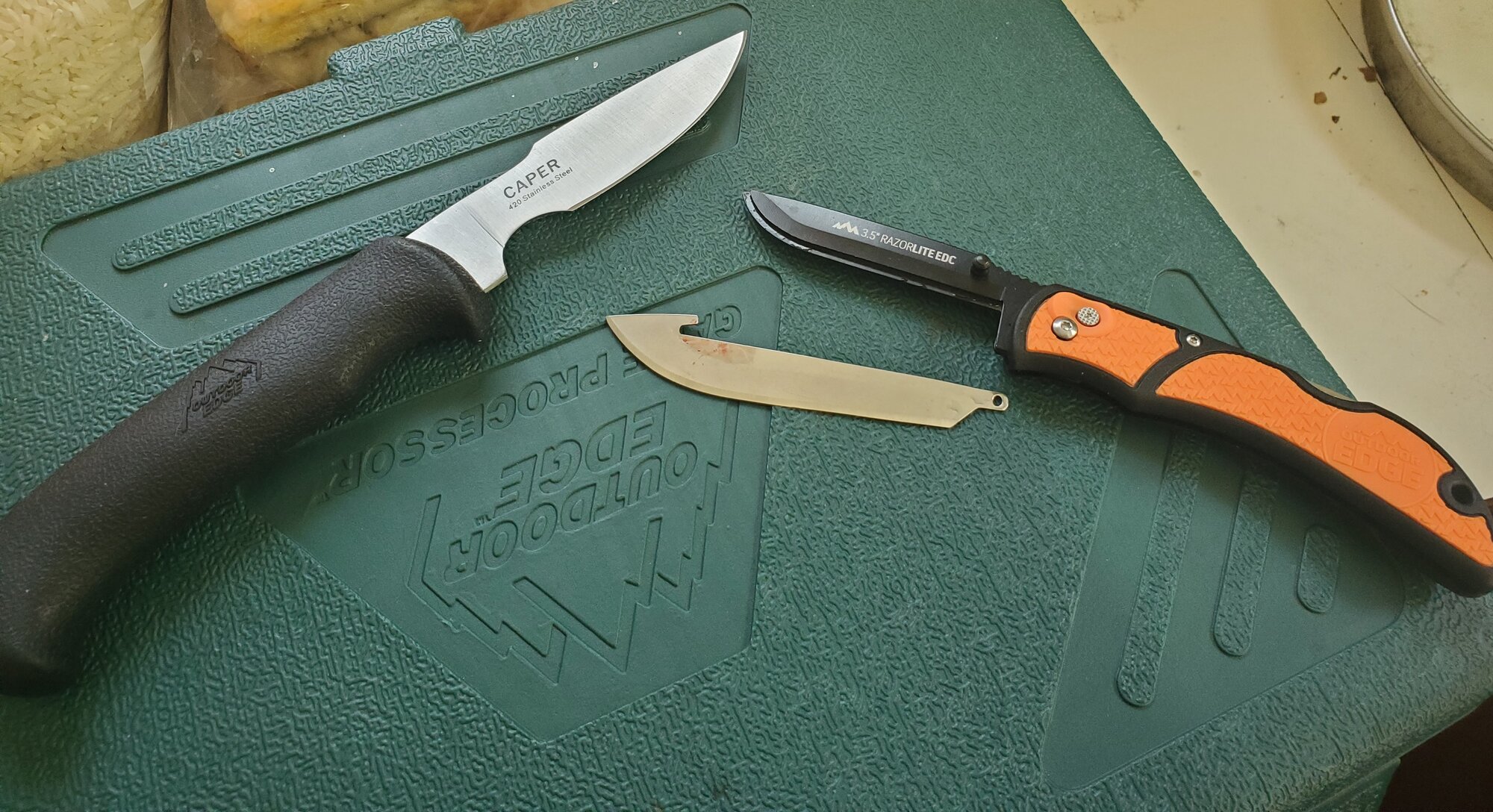 They are both Outdoor Edge brand. The black one is the "caper" that came with the outdoor edge game processing kit. The orange one is the Razorlite EDC. The replaceable blades are scalpel sharp. I don't have the utmost confidence in my knife sharpening abilities. I opted to go with the orange one for dispatching. Razor sharp every time. Small and grippy. The black one worked great for every other part of the process. The kit came with a slide through sharpener, and it works quite well.
I used a hexagonal Little Giant medium kill cone, mounted to a tree. I ordered this cone from wal-mart. I was super happy with how it held up, and the size was absolutely perfect for this broiler. 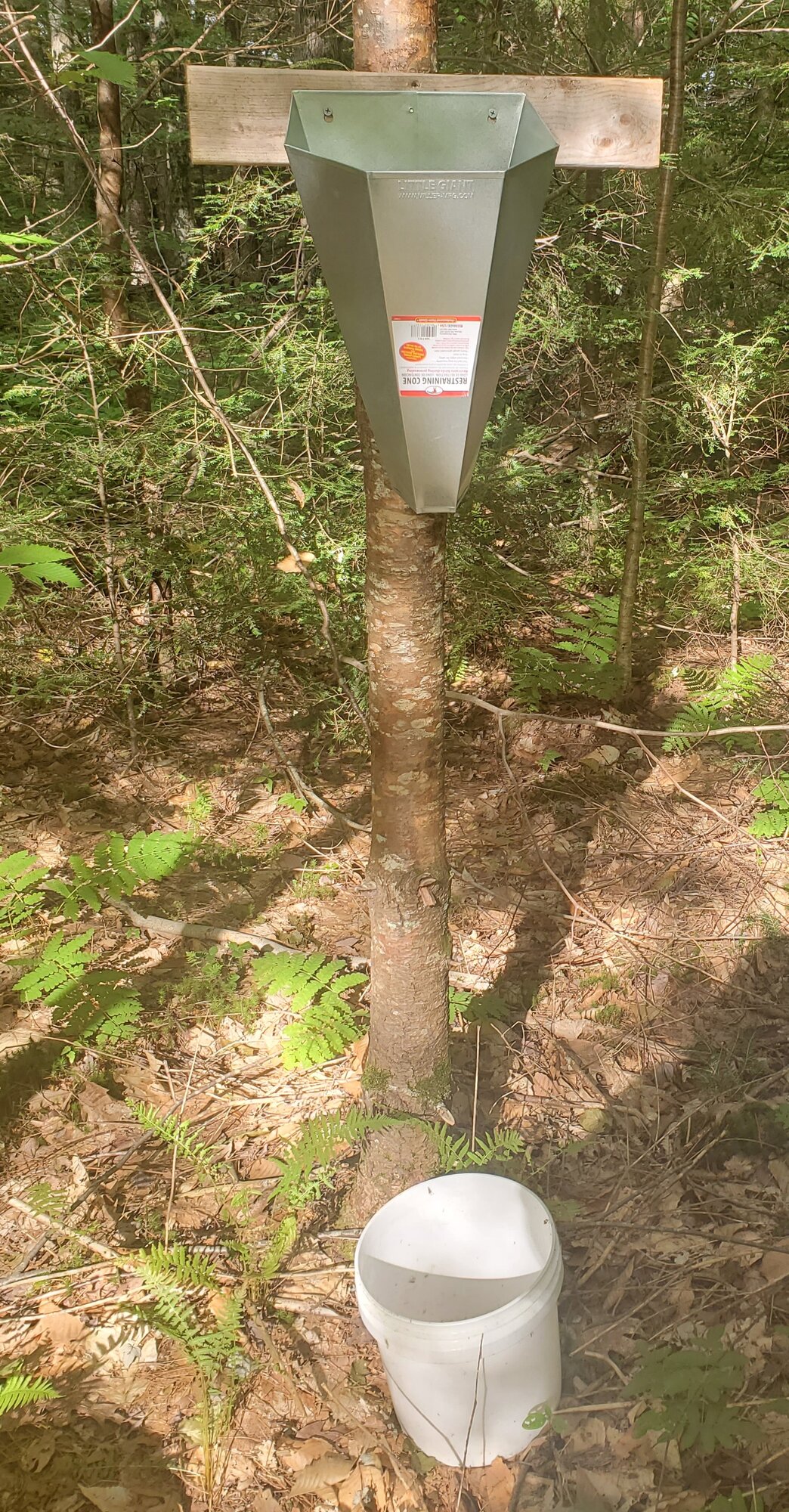 For my scalder, I just used a camp stove with a large stock pot with a candy thermometer. 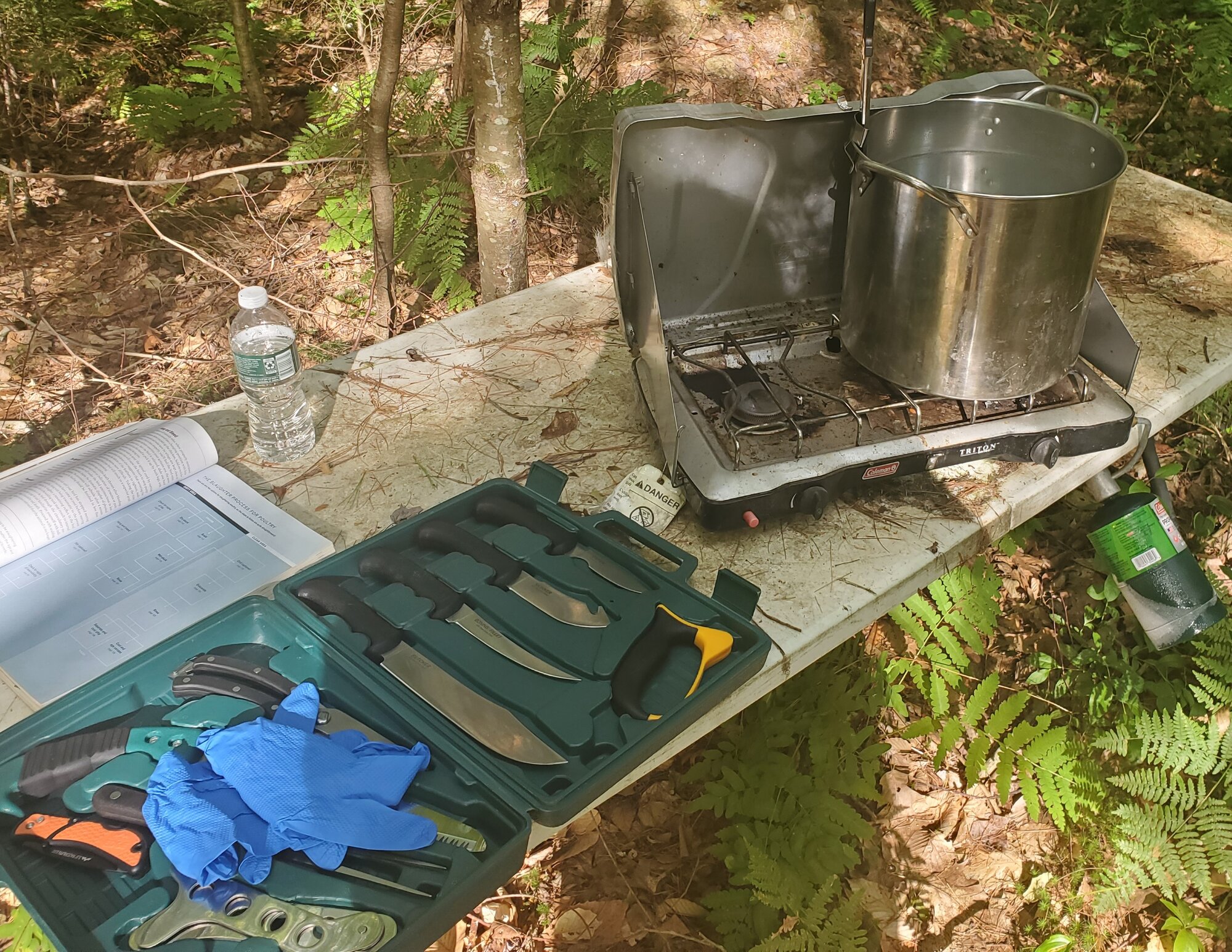 Other than that it was basically some dry buckets, one for blood/viscera, and one for feathers (different spots), 2 ice water buckets, a bowl of ice water (for edible offal), and a cooler full of ice water.
Setup
My set up was relatively simple. I chose to work with a dirty and a clean side. Dirty for killing and scalding/plucking, clean for evisceration. I separated the two sections with two buckets of ice water for the transition from "dirty to clean". Here is a picture with the "dirty" side. 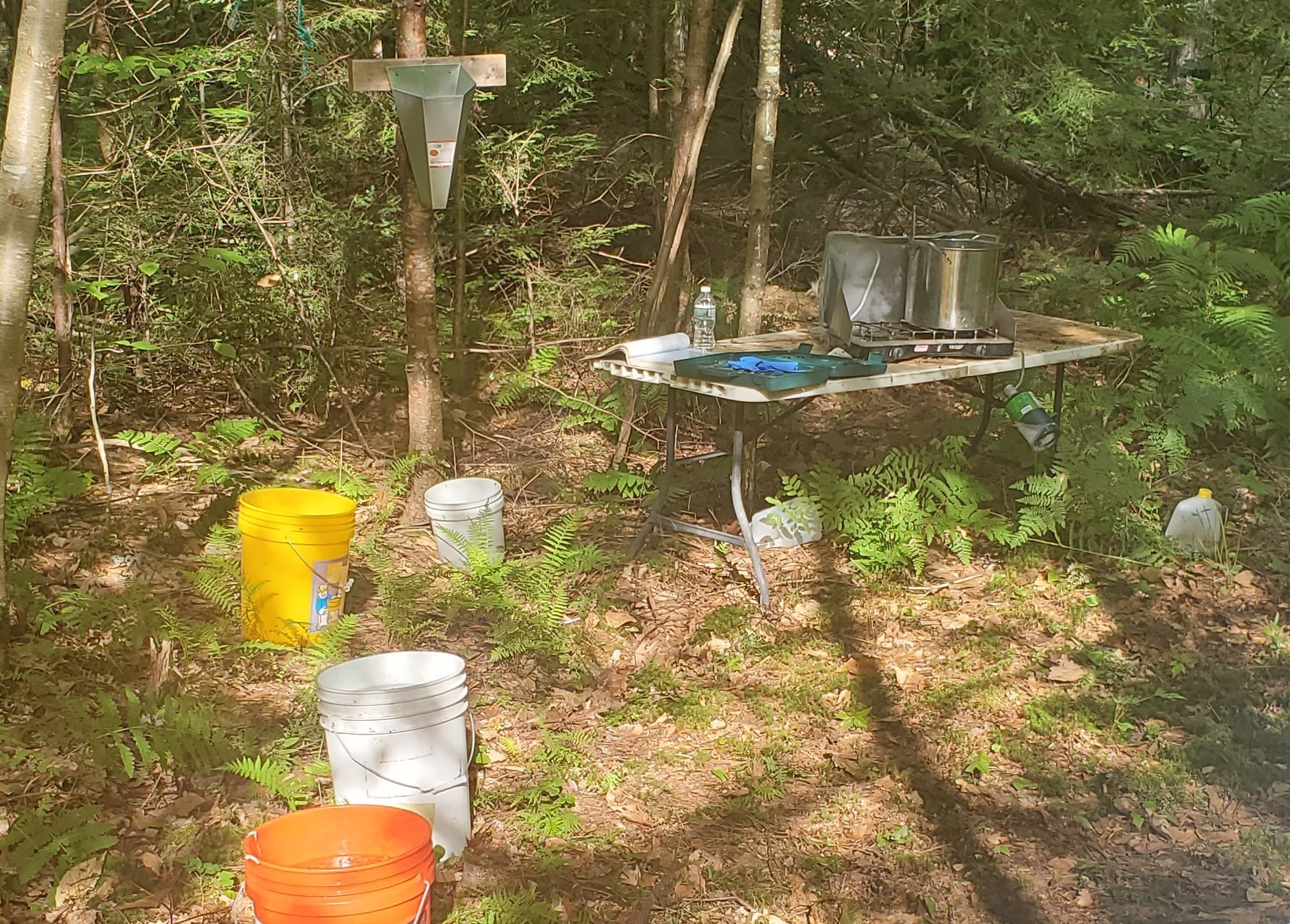 Above the yellow bucket I suspended some rope between two trees, to hang by the feet for plucking after scalding.
This is the "clean table side. Basically just a clean water table. I opted for my hose instead of the faucet because I wanted to be able to rinse inside the bird with a bit of a jet. Should have got table with flexible SPRAY faucet. 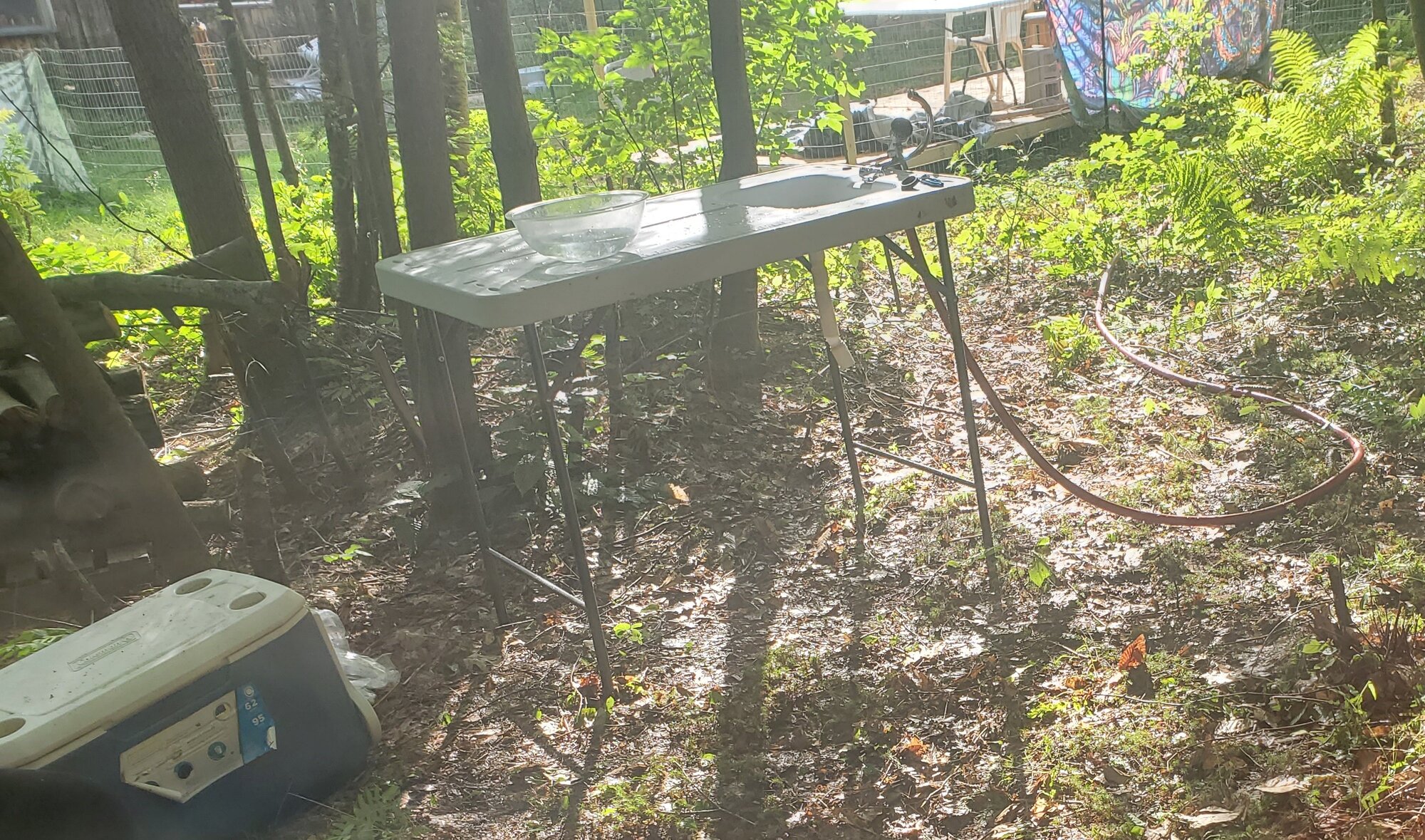 The bowl was for the liver I saved, and the blue cooler to the left is filled with ice water.
Process
I withheld feed for about 14 hours, starting last night. This morning, about half hour before processing time, I removed the bird from the group and brought him over to the butcher area. I left him there in an opaque tote with some pine shavings mostly closed so he could relax a little bit and I could finish filling my buckets/triple checking my supplies etc. When the time came I lifted him from the ankles and held him upside down. After flapping for a few seconds he really did enter a zen like state and I approached the cone. he went into the cone without a struggle and just got a little bit reactive when I grabbed his head and extended it through the hole of the cone. I proceeded with my cut. I immediately got a fountain of blood and knew I had done my job effectively. I know my knife was sharp because the bird did not even react to the cut itself. I kept hold of the head and aimed the blood into my bucket. After about 10 seconds he started to struggle a bit. By 30ish seconds the blood fountain had turned into a slow drip, and I knew the bird was insensible as he went through the most violent of the death throes. When he stopped moving I let go of his head and had a quiet moment of reflection as I let the bleed out finish up. 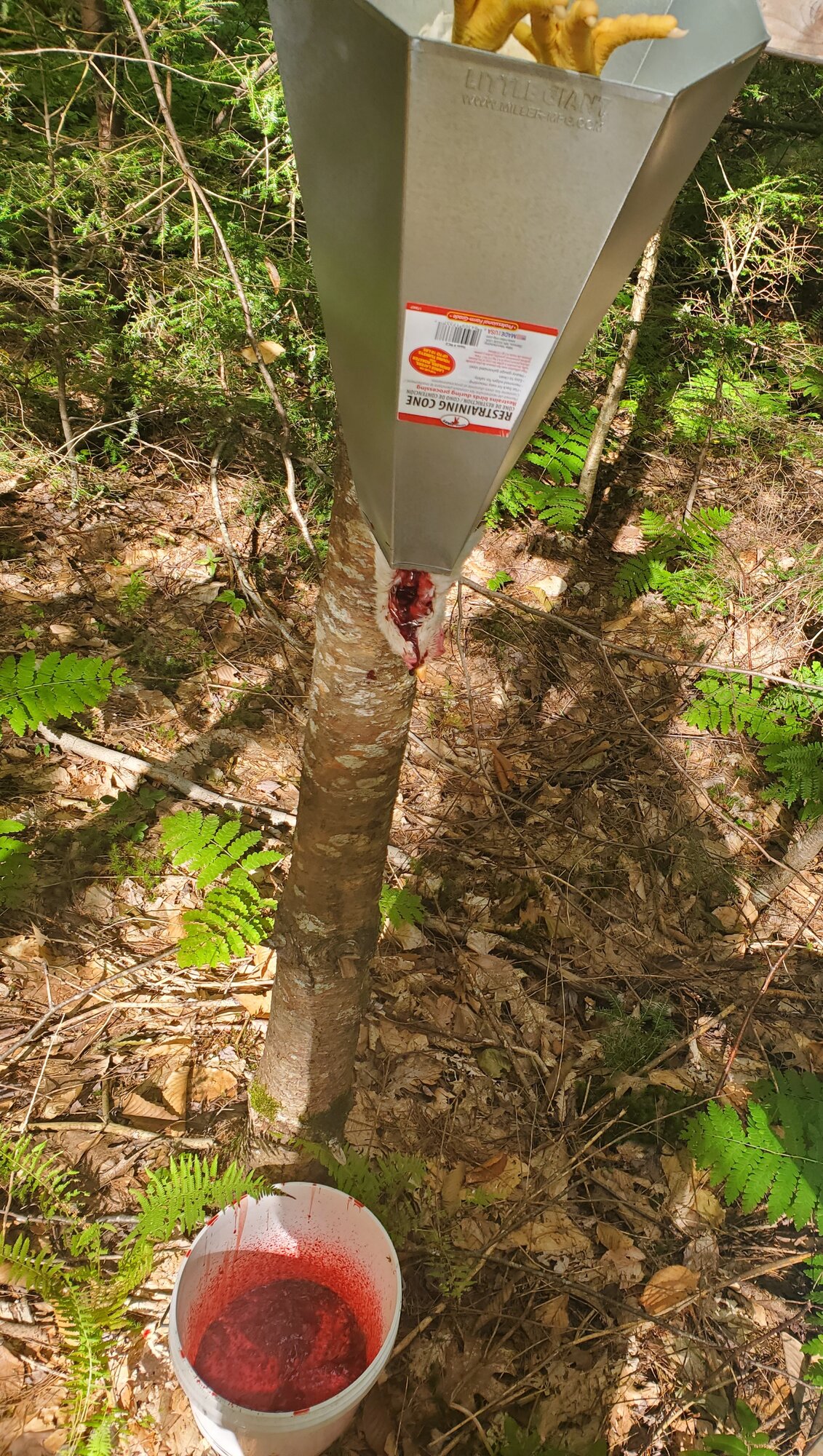 About 5 minutes after the cut, I tested for life in two ways. First I observed the vent to make sure it wasn't opening and closing. When I confirmed it was not, I went on to my final test. A poke to the eyeball with the tip of my knife. With no reaction to this whatsoever, I was sure enough the bird was dead to proceed to the next step: scalding (whole chapter on responsible sensibility testing in the above mentioned book.).
I timed it so I cut the throat when my water temp was at 150. When I was ready to dunk, it was right about 165. I did three dunk/swishes of about 5 seconds each. I tested after each one by pulling on a primary feather. The third dunk did the trick, and it slipped right out...I will say plucking was a pain in the butt and definitely the most time consuming part of the process. I would DEFINITELY get a plucker before a scalder. I do have a few ppl that say they want to help when I do the lion share of my birds in a day (still only about 7), so I will hopefully delegate plucking to them.

My wife also stepped in at this point and plucked behind me to get the small feathers I missed. We finished up the pluck together. 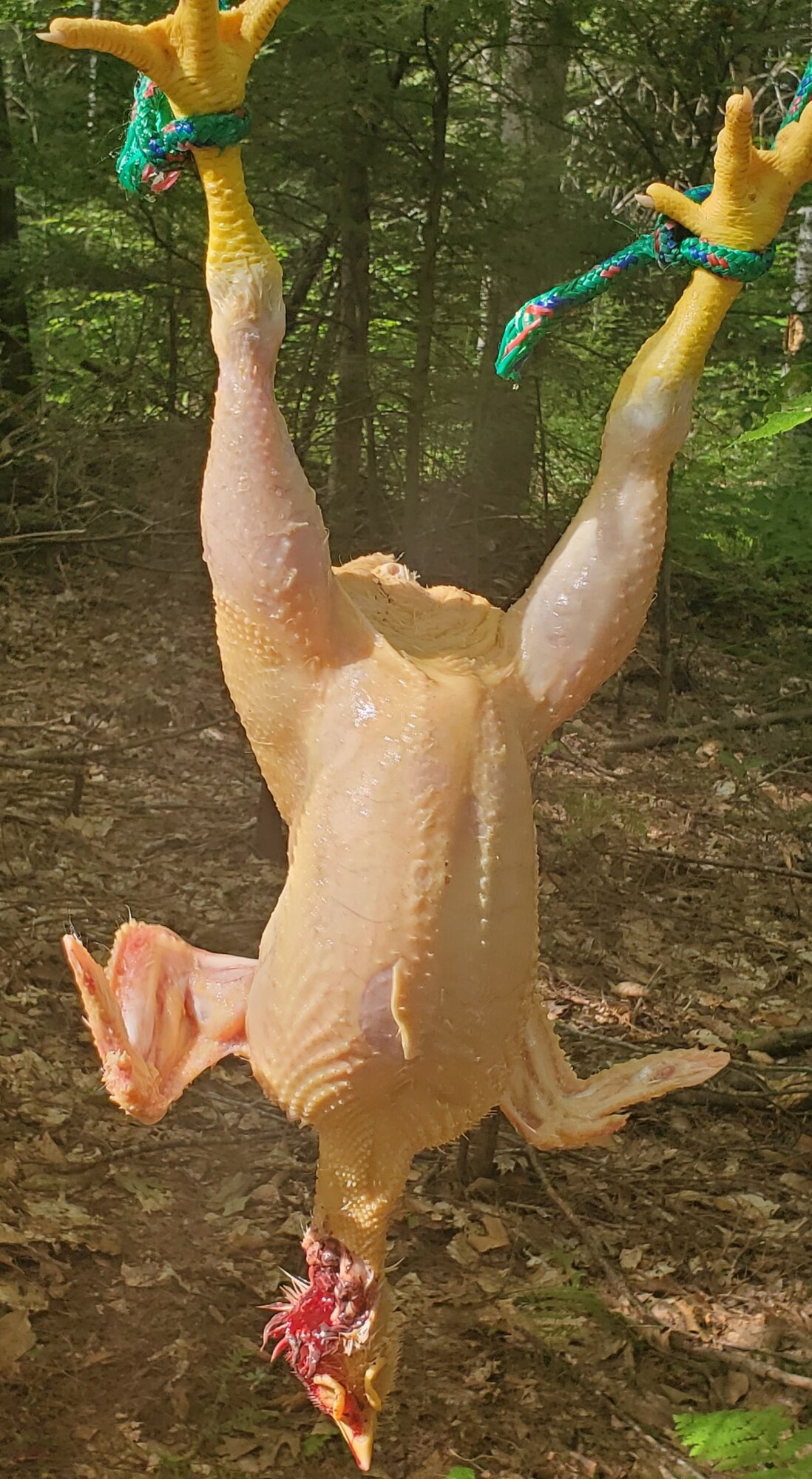 I then dunked my bird in a bucket of "dirty side" ice water to get all the feather debris off. I then dipped it in the "clean side" ice bucket for a rinse and onto the evisceration table.
. 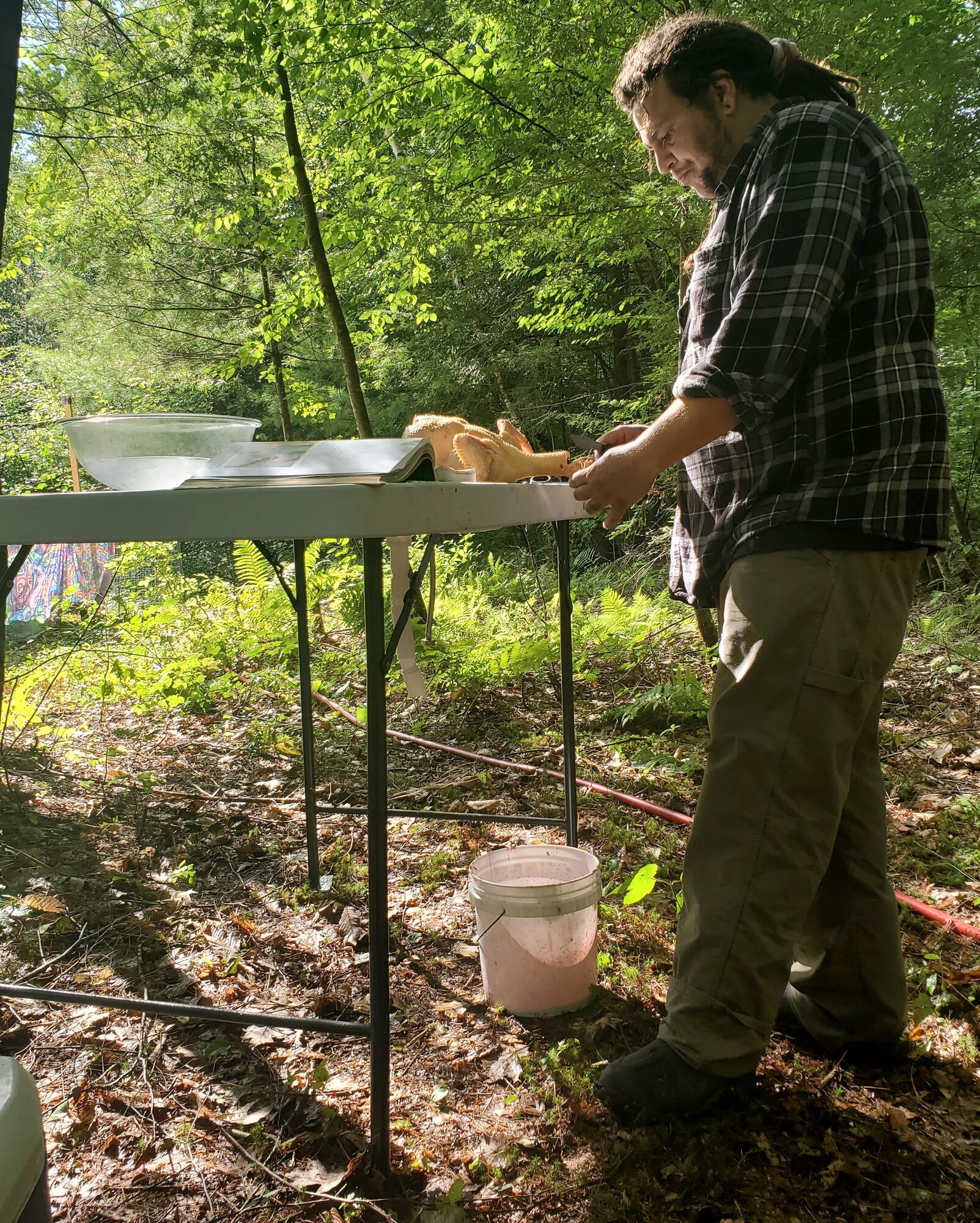 Didn't get too many pictures of this part but I will list the steps in the order I did them. 1.Remove the feet 2. Remove the preen gland 3. Remove head and neck 4. Separate trachea, esophagus and crop from neck/skin 5. Remove vent and large intestines 6.remove entrails. and Voila! 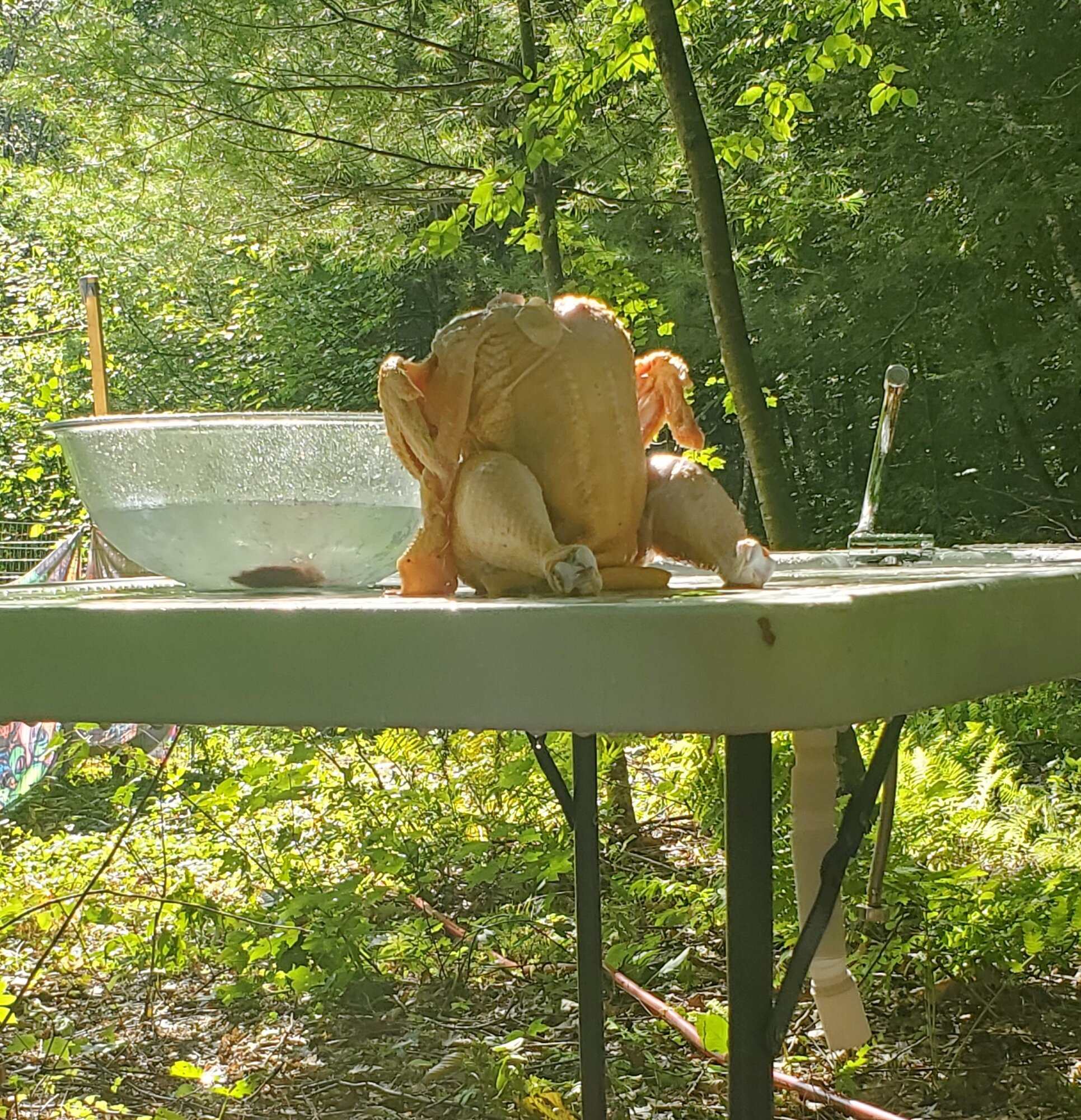 After I was all done I rinsed my bird, inside and out. Outside with the "flood" setting on the hose, inside with jet. When I was satisfied the cavity was clear of debris I put the bird into a chill tank (cooler filled with ice water.) 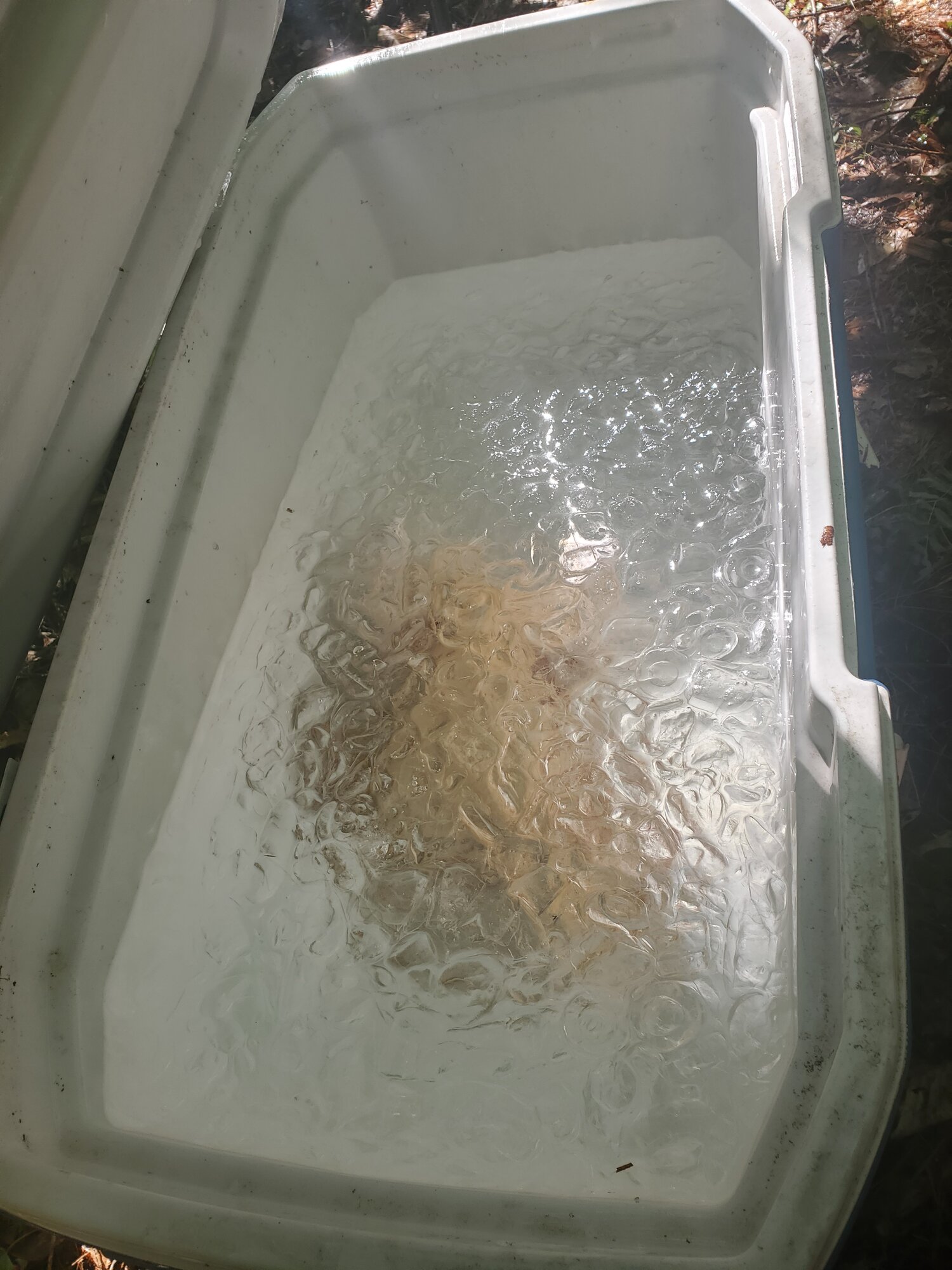 Results
After about 3 hours, I removed the bird from the ice bath. The bath really tightened up the skin, and basically jump started the process of turning muscle into meat (resting/aging.) At this point I used a butter knife to get the last few pinfeathers I was too feather blind to see during plucking. Took maybe 10 minutes. I let the carcass drip dry in a colander over the sink for about 15 mins and was left with this. 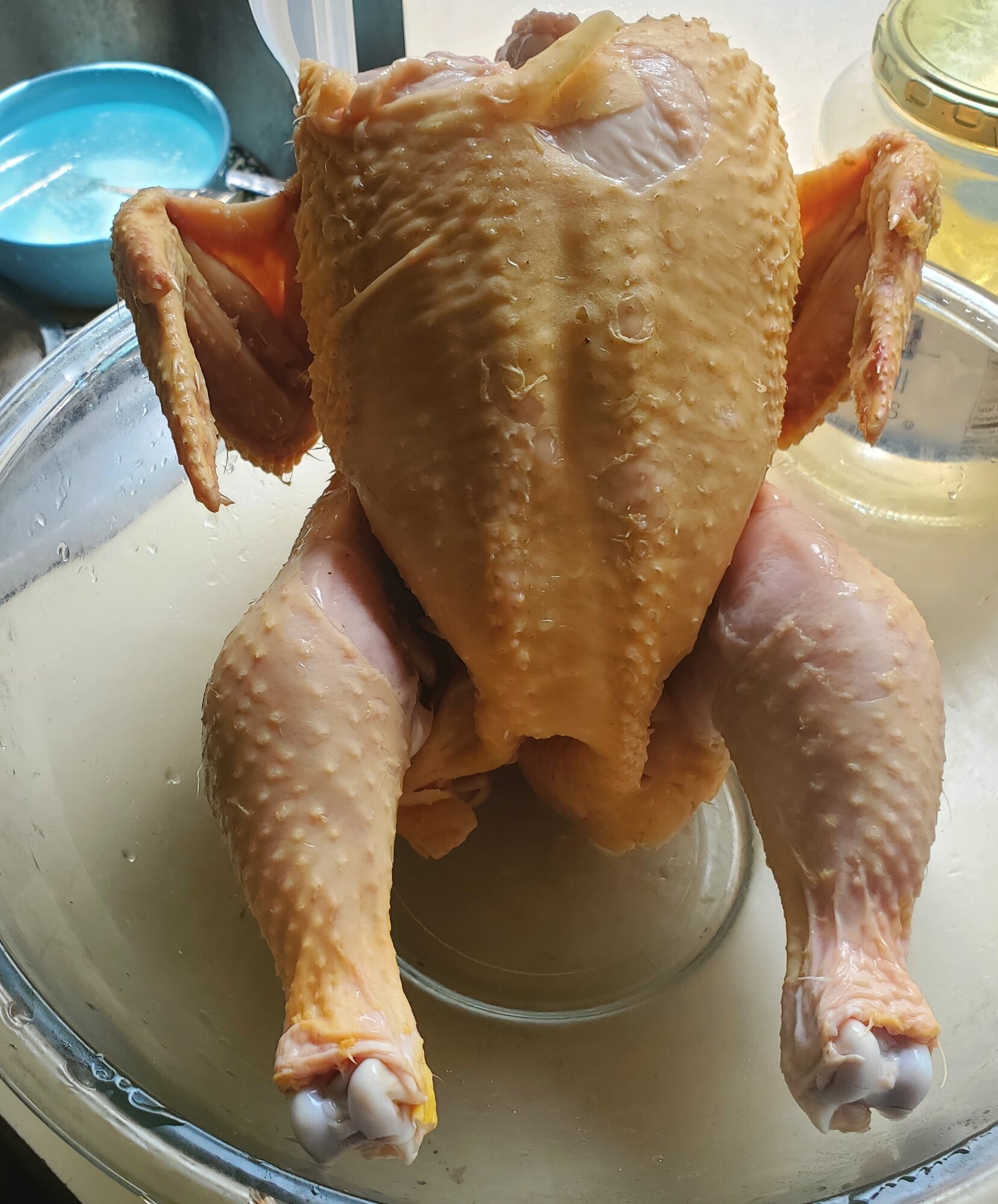 My scale is weird and starts at 8oz, giving me an actual final weight on this bird of 4.5 lbs! It was 47 days old. 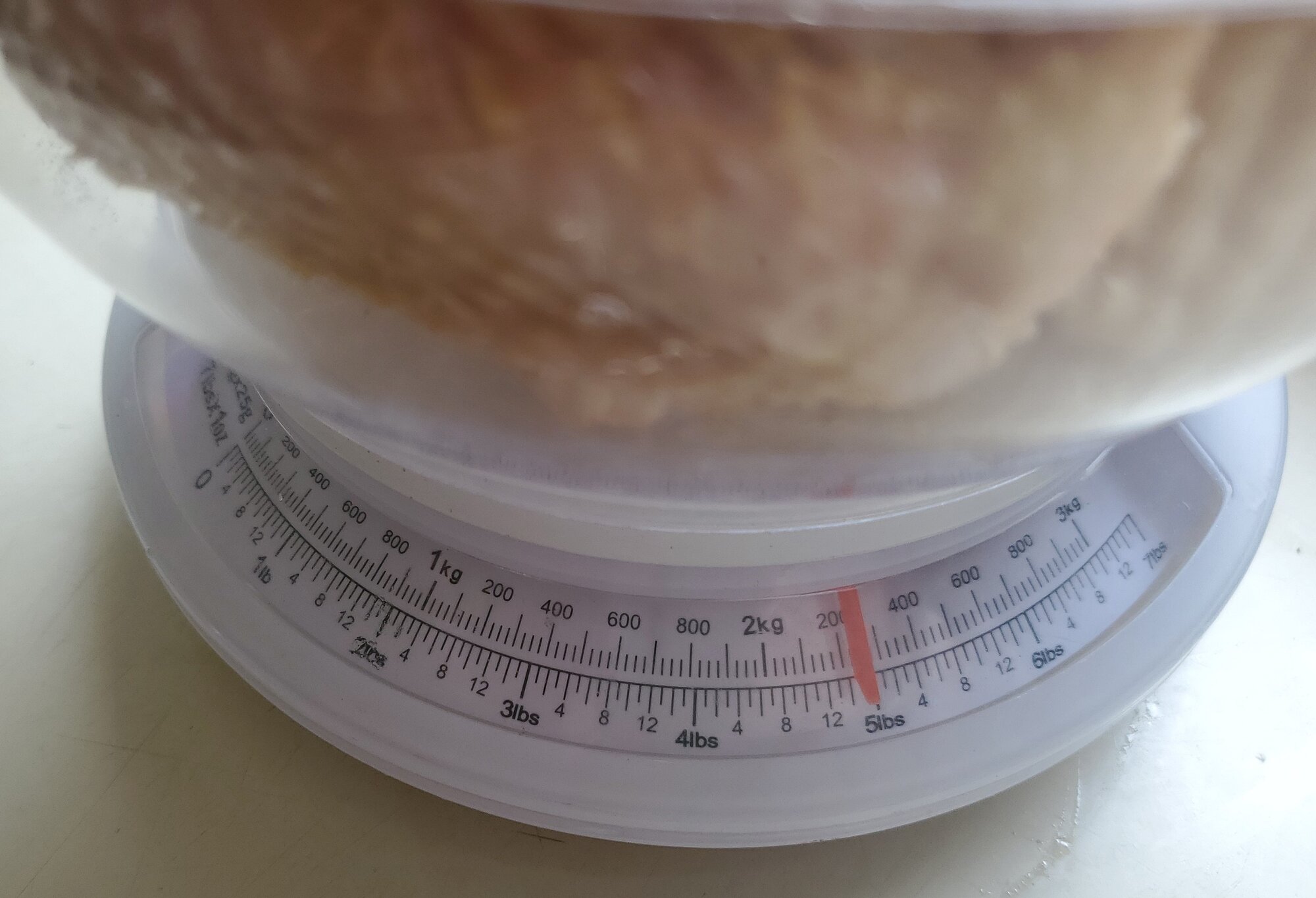 I plan to keep the bird in the fridge in an open bowl until Wednesday to let rigor mortis play out, and then broil this sucker whole! Low and slow on 250 until cooked, then bump it up to 375 for a while to crisp up the skin.

My feed cost per bird was $5.50. I sold some chicks making the cost of the birds free. I have "free" solar power and spent 2.50 on bedding for these guys total. My water comes from a well. My cost for this bird, therefore, was about $1.25/lb. dressed. What a home run!!!
Summary
The only thing I can find to pick about is I had a bit of skin tearing on the breast during evisceration. I imagine with more experience I could easily learn to avoid this. I also need to get my time down. Another thing experience will hopefully aid.
Raising these birds has been an incredible experience for me. They were funny, robust, rotund birds that I enjoyed spending time with. With responsible tractor moving and limited feeding, they were no stinkier or hard to handle than any other birds I have. Their ability to turn feed into meat is astounding and they really upped my self sufficiency game. I am from brooklyn, only been farming for two years. These birds made livestock for meat approachable, affordable, and doable. They have inspired me to look into adding rabbits and quail for next year.
As of now I have 10 left of my original 26. Only 3 died, all in the first week. The rest were sold (im facebook friends with the lady, they are thriving). Hopefully they will all be processed within the next week or so. Barring an unforeseen disaster, I am incredibly happy with the success of this venture, and am already thinking of ways to run my next batch smoother.

Almost all my knowledge on this subject came from Adam Danforth's book Butchering and from this website. Also, this is a chronicle of how I raised these meat birds. https://www.backyardchickens.com/th...of-meaties-just-arrived-26-cornish-x.1393220/

Here is a look at the finished product! Almost 5 pounds of fresh deliciousness. 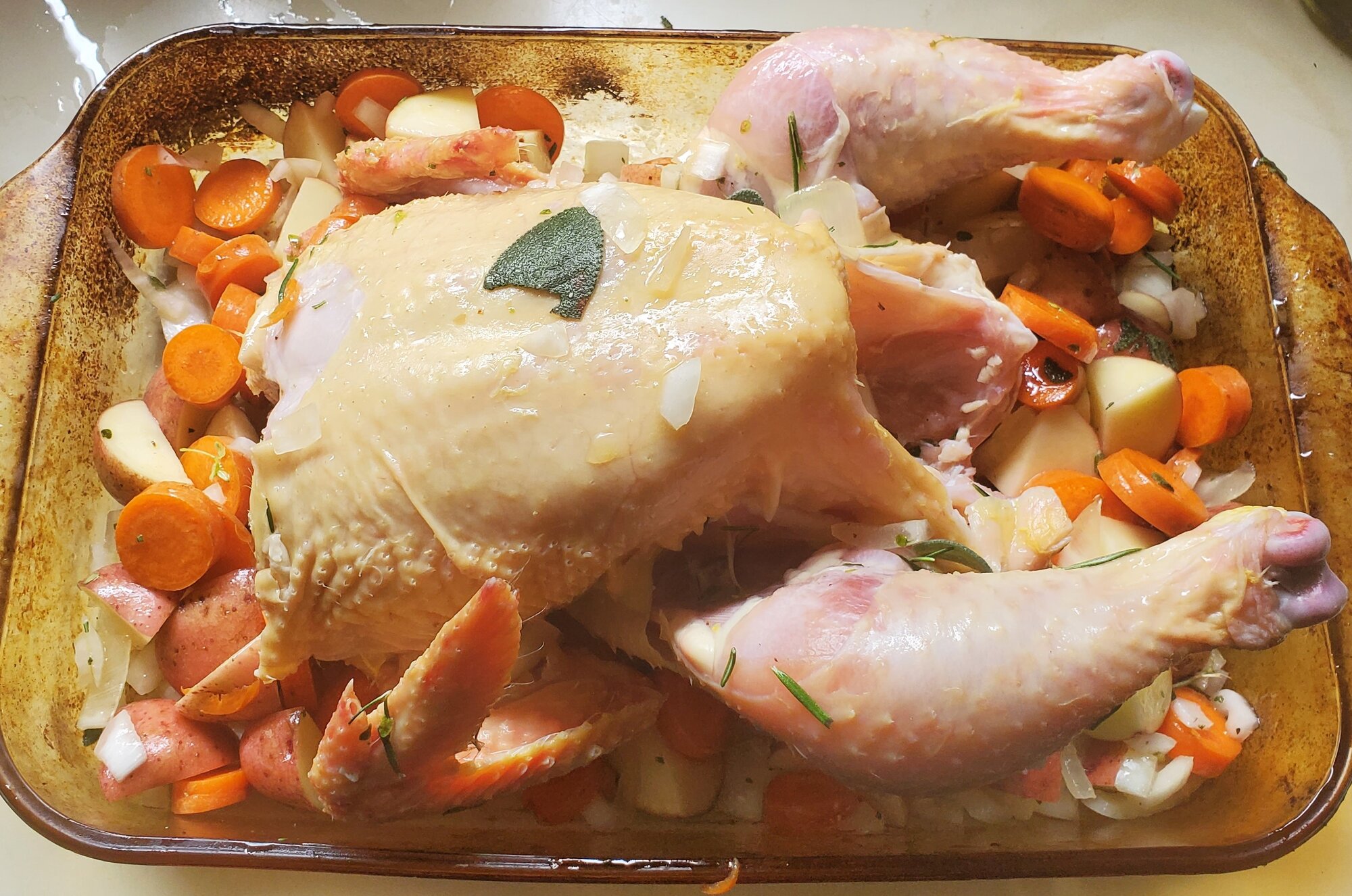 Tre3hugger
Proudly kept by about 30 chickens including 2 roosters, 10+ guineas, a pitbull and a husky. Junior counselor at pasture raised Cornish X freezer camp.
Comments and suggestions always welcome. Hope you enjoyed the article!

Thank you for sharing this with us. Great job!
Reactions: Tre3hugger