[FONT=comic sans ms,sand][FONT=comic sans ms,sand] UNDER CONSTRUCTION!!
Here is my attempt at making a homemade incubator. The design is based mainly on the Chick Chick bator that Miss Prissy made, along with the pill bottle vents used by the Gopher Bator. NOTE: This was built for function, not form! My motivation for building this came from the fact that I had an LG still air I'd bought from a guy on Craigslist, but hadn't arrived yet...as well as the fact that I had some hatching eggs I'd won in a BYC BSA auction, and they were en route, due to arrive Friday. I started this on Thursday. [/FONT] 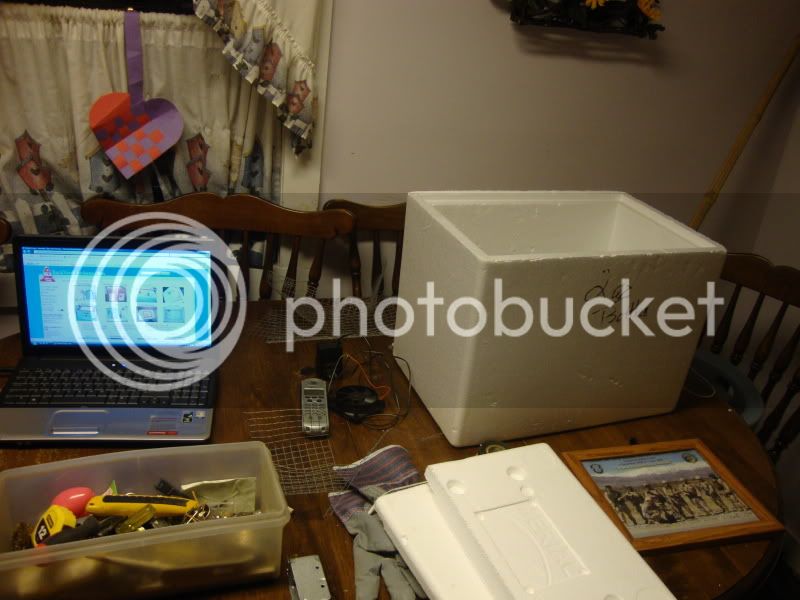 I did not use the phone in the bator...it was just lying on the table still. Also, the photo in the frame was not used, but the glass from the frame was. That picture is from when I was deployed to Afghanistan back in winter of 05.
Parts used:
[FONT=times new roman,times]Styrofoam box (FREE!! got this one from the local Vets, though I had to make the lid out of two smaller lids as the receptionist had thrown the large lid away already)
Lower level Water heater Thermostat ($10 at my local True Value hardware)
Electrical box (place thermostat inside since it reacts based on the temperature of the metal, not ambient air temp.)
Computer power supply fan (got for FREE!! from a local computer repair business)
Straw (cut into 1 inch lengths, used as spacers to keep fan out from the wall)
12 V transformer (found this one in a box of electrical odds and ends out in the garage. FREE!!)
Hardware cloth (FREE!! Had some left over from when we made the roof covering over the chicken enclosure)
Light bulb base (FREE!! Found in the same electrical odds and ends box out in the garage)
Light bulb (FREE!! have plenty of those around the house...started with a 60W, but reduced down to a red 25W) I'd read on BYC that a lower wattage regulates temps better.
Digital Hygrometer (FREE!! Found this in the catch-all drawer in the kitchen. Gives readings of Indoor/Outdoor temp as well as humidity) I'm also using a meat thermometer w/ probe, but some say it doesn't give accurate readings.
Zipper Thermometer (FREE!! Had this in a box. NOTE: I'm just using this since it's a regular mercury-style thermometer, since digital thermometers are usually off a little, from what I've heard.
Glass from picture frame (I used a 5x7. This is for the viewing window)
Electrical Tape (FREE!! Had plenty of this lying around the garage)
90 MPH Tape (FREE!!a type of Duct Tape I first encounted in the military. It's called 90 MPH tape b/c some soldier sometime taped something to a vehicle and went 90 MPH and didn't lose the object.)
Egg carton bottom (FREE!! These have the holes cut out of the bottom; they are used for holding the eggs in the incubator)
Bolts w/ nuts (45 cents each bolt, nuts were 13 cents each at local hardware store)
Plastic dishwasher cage for baby bottle/nipples (FREE!! Had left over from youngest son)
Plastic baggies and 2 elastics ( used to made homemade water wiggler)
First, I had to fix the box lid. I found that the short lid fit sideways on one side, and the other one I turned sideways as well, but I hd to cut in a little for it to fit next to the other one. Here's a picture of what I mean. 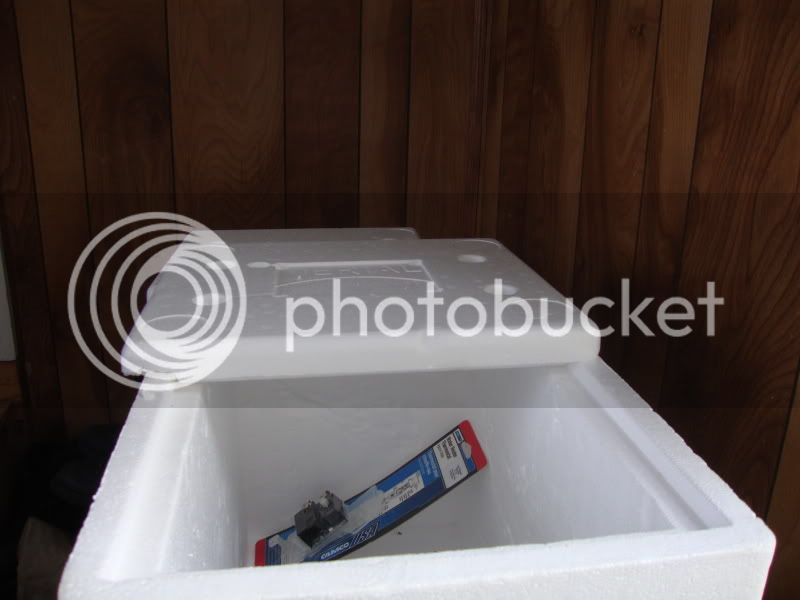 Next, I had to measure the inside area to figure out how much hardware cloth I needed, and how to bend it so it fit inside. I cut a hole on the end for the light bulb fixture, and installed the thermostat inside the electrical box and attached it to the wall of the bator using the nuts and bolts. I used a thin piece of plastic I had in the garage, drilled 1/4" holes two inches apart into it, then cut 1 inch squares. This will keep the straw pieces from pushing into the styrofoam (I found out through trial/error) by increasing the amount of surface area over which the force is applied when tightening the nuts down. Next, I wired the light fixture to the thermostat. NOTE: you must use some type of washer to keep the nuts from pushing into the styrofoam!
I then installed the hardware cloth floor inside the bator, and cut a hole out where the light bulb would be, and fashioned a cage to go around the light bulb. I also installed a wall of hardware cloth, over which I placed a piece of aluminum foil wrap, to prevent the eggs closest to the lightbulb from getting cooked! I stole this idea from the homemade bator that Bil made.
In order to use the fan, I cut the end off of the 12V transformer and wired it to the CPU fan. Make sure you connected the ribbed wire on the transformer to the appropriate one on the fan. On mine, the tranformer wire was black/white and I connected it to the red wire coming from the fan. If it doesn't work that way, try switching the wires. (No, I don't know this from personal experience, it just comes from 8 years of annual electrical safety training videos in the US Navy)ALWAYS DISCONNECT FROM POWER BEFORE SWITCHING WIRES!
OK...SKIPPING HERE TO SHOW FINISHED PRODUCT PICS... 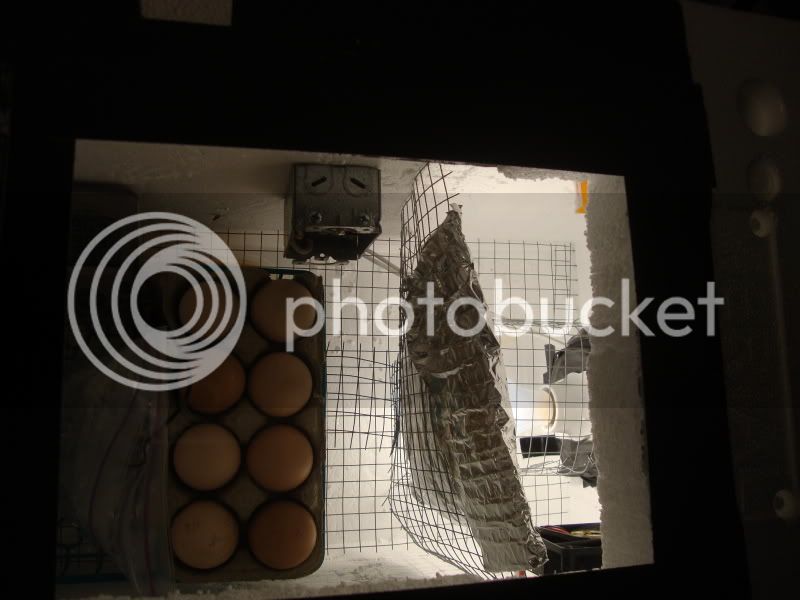 This is the view from above, after I finished it. I later made an egg turner out of a wooden box that clementine oranges came in with a piece from a broken shovel handle. You can see the fan in the bottom right corner...OH yeah....we did move the thermostat onto the end...if it were in the pic above, it would be in the top right corner, next to the light fixture. Also, in the top right corner, you can see a bit of orange plastic....that is the end of a pill bottle that I used for vent holes. The other vent hole is in the bottom left corner, but you can't see it in this pic. 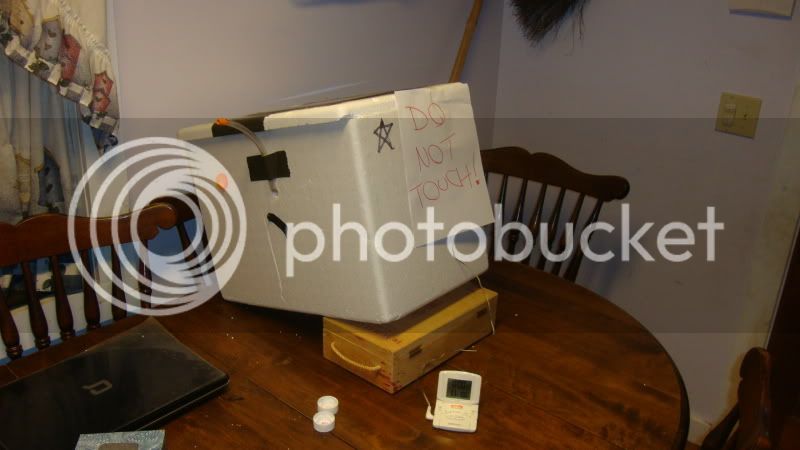 Here is the finished product...from the outside! The orange circle on the side is a pill bottle for a vent hole, next to the tube I use to fill the water reservoir. The star on the end was so I could keep track of which way I tilted the bator. I recorded this in my log...taking all of my temp and humidity readings, along with "Star up" or "Star down" for the tilt, making sure I turned my eggs enough. [/FONT][/FONT]