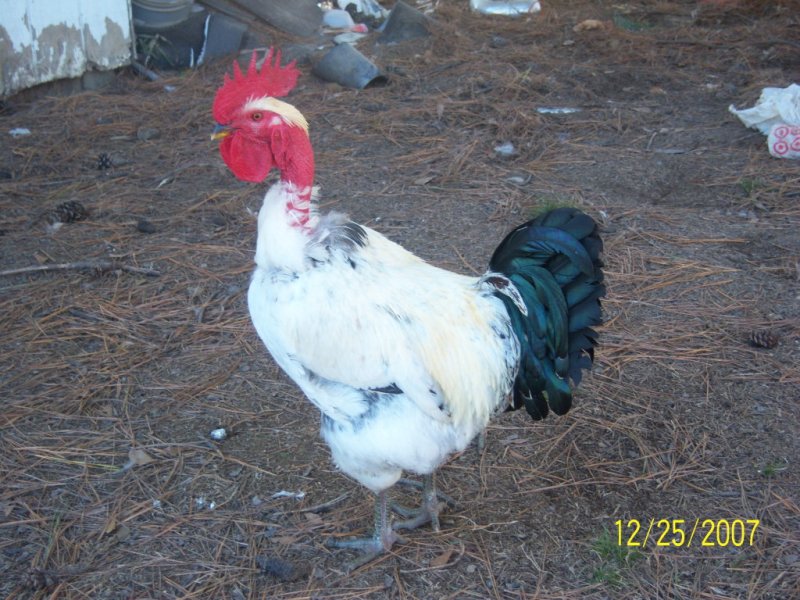 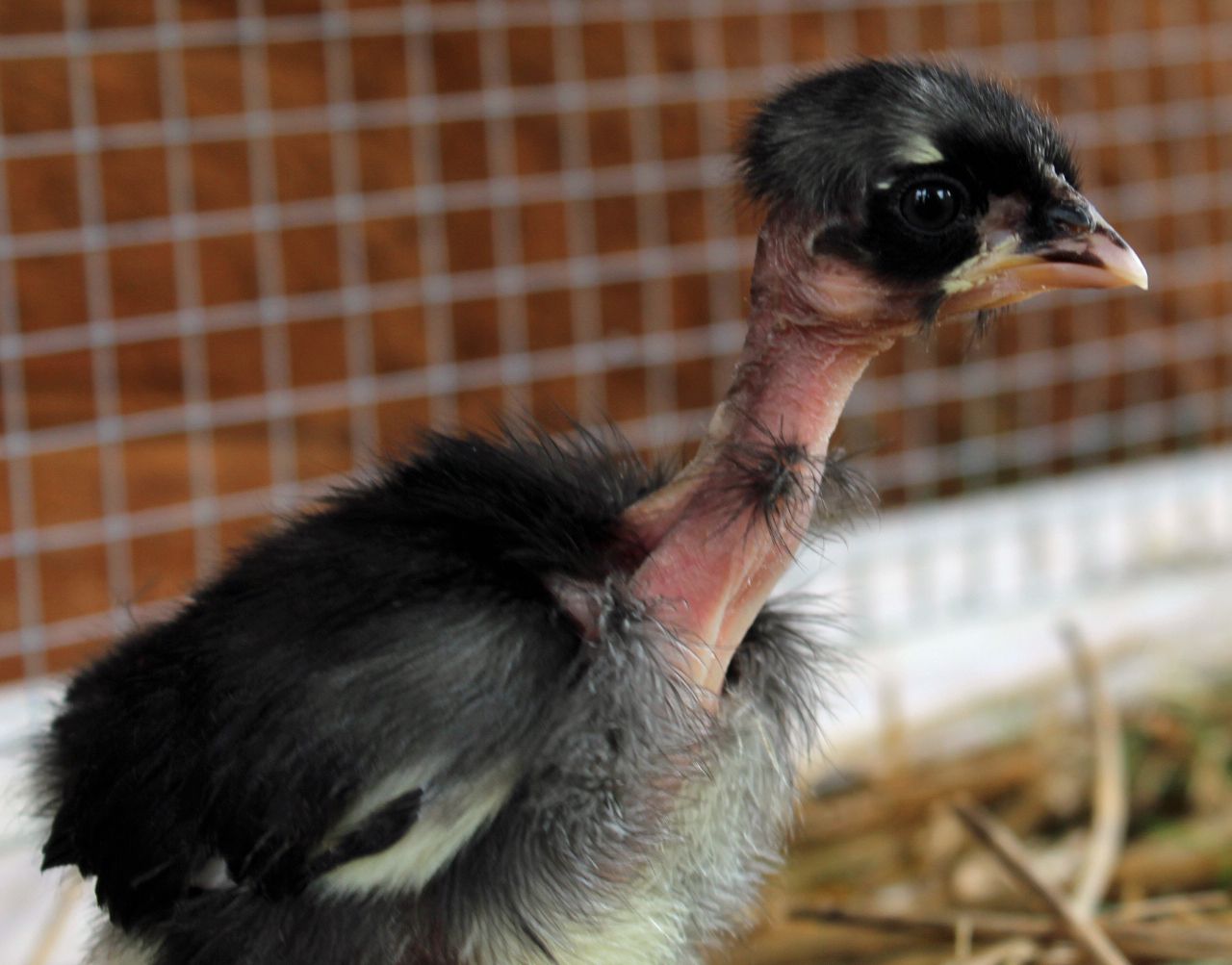 The Naked Neck is a breed of chicken that is naturally devoid of feathers on its neck and vent. The breed is also called the Transylvanian Naked Neck, as well as the Turken. Originally from Transylvania and was largely developed in Germany. The name "Turken" arose from the mistaken idea that the bird was a hybrid of a chicken and the domestic turkey. Naked Necks are fairly common in Europe today, but are rare in North America and very common in South America. The trait for a naked neck is a dominant one controlled by one gene and is fairly easy to introduce into other breeds, however these are hybrids rather than true Naked Necks, which is a breed recognized by the American Poultry Association since 1965, it was introduced in Britain in the 1920s. There are other breeds of naked necked chicken, such as the French naked neck, which is often confused with the Transylvanian, and the naked necked gamefowl.

Despite its highly unusual appearance, the breed is not particularly known as an exhibition bird, and is a dual-purpose utility chicken. They lay a respectable number of light brown eggs, and are considered desirable for meat production because they need less plucking and they have a meaty body. They are very good foragers and are immune to most diseases. The breed is also reasonably cold hardy despite its lack of feathers. Naked Neck roosters carry a single comb, and the neck and head often become very bright red from increased sun exposure. This breed has approximately half the feathers of other chickens, making it resistant to hot weather and easier to pluck. 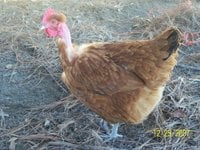 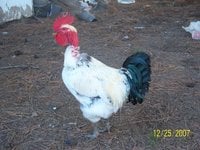 Pros: Smart, lays large eggs
Cons: None besides mine are to smart! They are the only ones to escape there coop!
Very smart chickens! Lay pretty well, beautiful eggs! Friendly also! Love to free range!
Reactions: BlackHackle
Pros: Hardy, good layers, big birds, good for meat production, very vigorous, entertaining
Cons: Can be aggressive towards other birds.
My first naked neck arrived by accident via hatching eggs I bought. Since then I've been breeding and crossing NN chickens for several years. They are great layers, good for meat production, excellent in all types of weather from hot and humid to cold and windy. They can be crossed with other breeds to produce different characteristics. My flock consists of green, blue and olive egg laying NNs that have Ameraucana and legbar parentage. I also have a line of Black copper Marans naked necks that lay chocolate brown eggs.

My oldest hens are three years old and still laying strong. Because they are so large and rugged, they can tend to pick on other chickens, especially if they are in a flock with several of their NN sisters.

Overall they are friendly and curious birds. They are experts at free ranging. I'm not sure how they would do confined to a small coop. Mine prefer to be out all day in the yard or in the run. 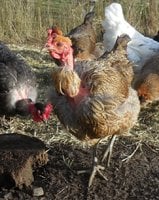 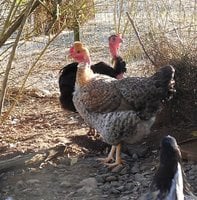 Reactions: BlackHackle and cactusrota
Pros: Very cold tolerant
Cons: Was very scared of people and flock mates. Didn't do well with chickens that were older than it.
I had a Turken cockerel and he was the sweetest thing. I got him and a faverolle mix as chicks. I introduced them to my flock of 6 pullets once they were fully feathered, and even when the lead pullet was nice to him (and his faverolle sister), he hated it.

Also, no matter how many hours I put in to patiently waiting, sitting, with a handful of food or mealworms, he would not come to me. He just wanted to be alone with his sister all the time. (Except for when he matured and mated with everybody!

But then again, he came from a rough life as a chick. He was poked and prodded. So I'm giving 3 stars for my experience. And I bet if he wasn't so beat up as a chick, he would be amazing. (Also even if he was sweet, he was a boy and we didn't want a turken boy. But if he was sweeter, we may have kept him as our flock rooster.)
Read more…

I love my bantam turkens. This is the first I heard about the Naked Neck Gene affecting the Vitamin A which inhibits protein. Can you expand on that please?
I have updated my post with links to the scientific articles. let me know if they work. the BMP12/GDF7 gene is actually found throughtout all the cells in the chicken body but this other protein that is a type of Vit A and another thing work together and create the nakedness even more. They do not know why the neck skin is more sensitive to the acid. I have thought about seeing how hard it is to access this acid and injecting some into incubating eggs to try and stimulate more nakedness throughout the whole bird.... this is an area where that is no studies in (yet). Being in college i am sure i can get my hands on surplus supplies and figure out how to make or get the acid compound.
I have several Naked Necks. They lay a large egg and lay pretty good.
I love mine!!! I have a trio from MrHeinz77
I just got one today (day-old chick) and I'm in love! She is the cutest thing... More personality than I ever expected... Such a fun little girl.
I have two that are 13 weeks old. They are so ugly that they're cute! I also have 24 other chicks the same age and it looks like those two may be on the bottom of pecking order right now. One is very friendly and the other skittish as you say.
You didn't mention the age of your birds. Maybe they arent quite old enough. I hope they will start soon for you. They don't start laying as early as other breeds. some of mine are about 18 weeks now and haven't but Im sure they will soon.
Hello people of the chicken world i was wondering i am getting my first chicken and ia was wondering if the kind f chicken that i want is a Naked Necked turken, do they get moody, will they let you hold them.?. I need to know please respond.
I love my Necked Neck girls and think they are beautiful. At first they were very independent and wary but as they started to lay eggs they got very sweet and will let me hold and pet them now. They are always the first to the treat bowl and are jumping up to try to snatch a bite before I can even get the treats down to the bowl.
Cute birds they are a little more fragile being the neck is featherless but very very cute
they look so abnormal they dont look like they should have necked necks lolz very unique breed
I also have NN only 3 hens and a roo. All my chickens are full blooded, but for the winter all are housed together. I was thinking of crossing a NN roo with a plymouth barred rock hen or vis vrsa this spring. Does anyone know the result? will I get any barred NN?
I'm looking forward to adding a few of these to my flock next year as well. I think they're adorable and I like that they're supposed to be really personable and go broody

"These birds should be raised by those people who go to the pound and adopt the ugly puppy with mange and three legs."
I am that person and this is EXACTLY why I got these birds. That is soooo true!!! I absolutely adore how hideous they are. They are so friendly and vocal! I have one named Candice who practically jumps in your lap. Which is pretty amazing seeing how I got them at about 5 months old and they weren't handled as chicks. Maybe they aren't very bright. (Which would make me love them even more.)
You will enjoy your naked necks

What are the roosters like?
Deliscious!
Birdgirl99...Have you ever owned a NN/Turken? They are anything but fragile...quite the contrary.
And...Beaty is as beauty does...lol
Correction...very cold hardy. You have to have or have had them to know that! lol
You must log in or register to reply here.