2nd chicken to have one hanging wing.

About one month ago my one of my 11-12 month old hens, an Orpington, had a dropped wing and was hanging back from the rest. We thought she injured it when flying out of my arms. I wrapped it and she started doing less and less. about 1 week later she couldn't stand, ate very little. then over a couple days, poop became liquid and she was infested with small fat worms and failing. I culled her. Now two weeks later I find another hen, an ISA brown, with one wing hanging to ground. She is laying, was very active yesterday and is eating. just the drooping wing. BUT visions of my Orpington's demise.
please help with any ideas you all may have. Live in Central Texas.

Sorry for your loss. Do you have any pictures of the worms? Could they have been maggots on the vent? Tapeworms can be flat and in segments. Could these hens have been injured? Mareks disease can cause weakness or paralysis in legs or wings, and a decreased resistance to disease. Were your chickens vaccinated for Mareks? If you can get a picture of the worms, we may be able to tell you what they are and how to treat them.
T

Here is a picture of my ISA with dropped wing. And a picture I took of the worms that fell off of my Orpington onto the ground. I have never seen such fat short worms pictured as chicken problems. If I can I will upload a short video clip of the worms.
In my small flock I have two Cochin about 1 year old and 4 three month old chicks (I heavily suspect one is a rooster but I had asked for day old pullet chicks)
If I can treat please tell me with what and how.
And thank you for the support.

And yes I was told they were vaccinated for Mareks and treated for coccidiosis prior to me getting them at 4 1/2 months. But I have already lost 1 from the original group. I think to coccidiosis. At the time, I treated the flock.

I'm sorry that you had one die.

The one that is now showing problems, please gather her up and look under her wings for injury, bruising.
Show some photos of all the birds, especially the one you suspect as a rooster.

The worms in the photo are maggots. You mentioned they had fallen off the one that died. It sounds like she may have had an injury that became infected and infested with maggots. This is called FlyStrike which can lead to death if not addressed.


tmbrickey said:
she was infested with small fat worms and failing.
Click to expand...

tmbrickey said:
a picture I took of the worms that fell off of my Orpington onto the ground.
Click to expand...

thank you for help.
Here is a picture this morning of her sitting after examining her - no bruises. She is not able to walk well. falling forward. Struggling. Much faster progression than my Orpington. My Orpington walked around for 5 days with her wing in sling bandage before she stopped walking. Could move her feet but wouldn't stand on them. But then she sat around for 5+ more days. I suppose it is Mareks. They were supposed to have been vaccinated. I got them as 4 1/2 month pullets.

Here are pictures of the rest of the flock. The two Cochins are the only other from the same age. The four new ones were raised by the Orpington I lost - I put them in as day olds when she was brooding. The four chicks - two Ideal white ones and two Golden Star red. but one golden star red grew quickly and bigger and is IMG 5932(1). In IMG 5931 she/he is next to one of the Ideal whites.

I am so upset I can hardly type this. I just wanted to have a little flock and enjoy them.
Does anyone have any advice?

And according to this I will probably lose them all. It says if the chicks were vaccinated I still shouldn't have put them in with mama for 4 days.
https://extension.psu.edu/mareks-disease-in-chickens

You didn't find any injury or bruising on her?

What do you feed including treats?
I would gather her up, work on hydrating her. If you have any poultry vitamins give her a direct dose.
It's so hard to know exactly if it's Marek's or not without testing. If you lose her, then sending the body for necropsy will give you the best information. You can find your state lab here https://www.metzerfarms.com/poultry-labs.html

To me, the last photo is a cockerel. 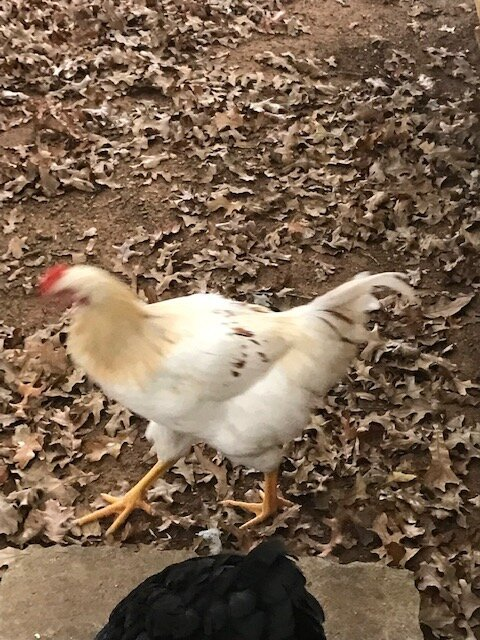 Friday at 6:51 AM
Snicketysnoksnaksnik
S
M
Chicken’s wing feathers are hanging down on one side

Dropping wing, not as energetic as normal and weak in ducks, any reasons?

Chicken's wing is drooping. No other symptoms.

M
chicken with an injured wing