Hi everyone! It's been quite a while since I've posted, but I was hoping the more experienced people here could help me help one of my 6-yr-old Golden Wyandottes who's been a little off the past few days.

A few days ago (maybe 4-5 days now?), I noticed she had a really large crop first thing in the morning. I had given them some corn cobs to pick at while I did other chores, so figured maybe she had just really indulged on them and filled up quickly. I felt her crop in the evening when they were roosting, and while large, it didn't seem abnormal- not squishy, not lumpy, no bad breath, etc.

Next morning, I made sure to check her over right when she got off the roost. It had gone down a little but was definitely bigger than it should have been first thing in the morning. I also noticed under her spot on the roost, there was some weird poop- mostly urates, sort of pale yellow, with green solids. Ugh oh.

Kept an eye on her all weekend and it's been the same. Yesterday was the first time she looked outwardly uncomfortable- she was pretty slow moving when they were out free ranging, not really scratching around, just sort of standing off to the side. Never good when they do that. When I went to close them up at night, she was laying in the nesting box and hadn't roosted. I lifted her up to the roost and expected the worst this morning.

But she surprised me, at least for now. She came down from the roost with better color in her face (she is a bit pale, but is also molting, so she's been a bit pale anyway). Poop under the roost is still mostly urates and pale yellow, but there was a little bit of normal solid in it as well as the green solids. She was acting HUNGRY this morning- really eager for appealing food like sunflower seeds and kale leaves. She drank a lot of water. She seems to really want grit- she ate grit from the bowl and then was also picking at the sand in their dustbath bucket. She just looked perkier, though was still waddling a little uncomfortably. But more interested in staying with the others.

I can't shake the feeling that it's some sort of crop issue. Several years ago, I lost my absolute favorite hen to what an avian vet called "Crop Immobility"- basically, the muscles of her crop just slowed way, way down and couldn't push food through. It wasn't obstructed crop or sour crop, something more structural. He even gave me some shots (can't remember what now) to give her to try to "jump start" it again. Sadly, she really never responded, and unfortunately I lost her.

If she stays perkier like she was this morning, I'd love to try to nurse her through it if you have suggestions. If she goes downhill I won't let her suffer. Does anyone else have any ideas for me to try? I don't think it's something like egg yolk peritonitis, despite the yellowy urates, as she's not really seeming swollen in her abdomen.


PS- we no longer live near the avian vet, though my small animal vet practice does have one vet who will see chickens. Because of covid though, I know it's taking a really long time to get in for an appt, so I'm not sure how quickly I could get her seen.

It sounds like it has been several days and her crop is still not emptying overnight.
I would begin treating for Sour Crop along with getting some coconut oil into her - see this article it's great and the methods I use.
https://www.backyardchickens.com/ar...w-to-know-which-one-youre-dealing-with.73607/

With her molting, she's likely not feeling too well, but it's important that she's drinking well.
I would limit what she's eating - offer a bit of wet feed, cut out everything else until you resolve the crop symptom.

She's 6 so there may be an underlying condition that is causing crop symptoms - reproductive disorders, worms, coccidiosis and infection are a few. Has she had any problems with laying eggs this year until molt?

Thank you for taking the time @Wyorp Rock. I found that article today and it was very helpful. I will try the coconut oil strategy with her later this afternoon. I think I explained away the weird poop the first couple of days because I know molting always hits her hard, and it isn't out of the ordinary for poop to get a little questionable when she's going through it each year.

I do worry about whatever's going on inside I can't see that might be blocking up her system. She's never had any laying issues, though I can't pinpoint the last time she did lay. My flock is fairly old: all between 4-6 years old, but they laid great all summer, generally 6-7 eggs a day. But like I said, I'm not sure which belonged to her (they are all light brown layers).

Again, I appreciate your advice and am hopeful trying the coconut oil crop massage helps some.

Keep us posted on how it's going.
You may need to treat as Sour Crop even though you don't currently detect a smell. OTC yeast medication as suggested in the article is something I have used a few times. It does seem to make a difference, but I still often give the coconut oil in addition to the yeast medication.

Afternoon update!
Went out with my glob of coconut oil. She was very hard to catch, even in the run (I take that as a good sign for a bird that’s not feeling great).

I get her all wrapped up in a towel and sitting on a table so I can really look her over. Unfortunately her bottom is a lot messier and crustier than I thought. She’ll need a soak to get the dried on funk off. But her eyes are bright.

I look at the giant glob of coconut oil and at the little beak and think...there’s no way all THAT is going into this chicken! The first attempt ends up with her shaking it all over me

But then she realizes that it’s tasty, and from there she happily ate it all up! Phew.

Then I start massaging the crop. The first couple of “squeezes,” she does burp a little sour gas, so I will try the monistat treatment with her (very successful on another bird a year or two ago...). Not sure how concerned I should be, but she has a ton of grit just sitting in the crop. I actually worried about massaging too roughly as it was really packed in there and I didn’t want to hurt her. Is there a way to tell if it’s “too much” grit, and if so, is there any way to help her expel it?

She seems fairly bright and perky at this point. Hoping to see some stuff move a bit overnight! Fingers crossed. 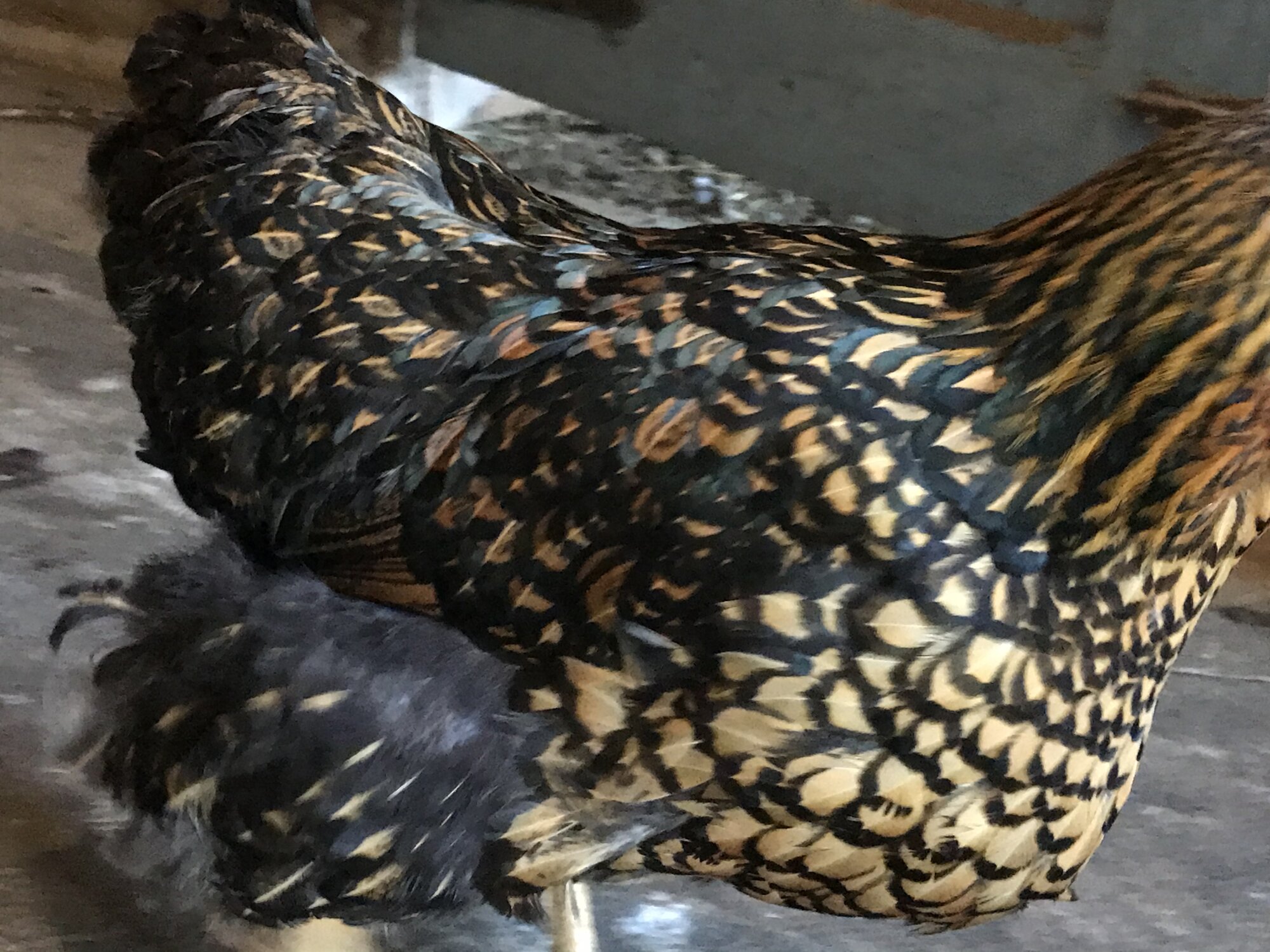 Weird angle-she was moving too fast-but you can get a sense of how large the crop is. She’s a big girl anyway, but still

If you do smell a sour odor, then don't massage any more.
I know Carol (@azygous ) says not too in the article as well. I am not 100% sure why, but I suspect massaging makes the yeast infection worse, she may tell us more LOL

Glad she ate up the coconut oil. Most of mine will. My hens actually would love to have coconut oil chips as a treat they love it.

If it's grit in the crop, then likely it will pass on through depending on the cause of the crop slowing down and turning sour. With my birds any time I have had crop issues, they had reproductive problems. Inflammation/fluid, etc. was slowing the whole system down. Treating the crop did help though, but sometimes an underlying condition can continue to cause problems periodically until they get to the point they decline.

When you get a chance see what her poop looks like.

It's possible for both sour crop and impacted crop to be present at the same time. Often, the crop becomes impacted first, doesn't empty over night and the contents begin to ferment into a yeast infection.

The reason we don't normally massage a crop with a yeast infection is because it's easy to nudge the sour liquid back up the esaphgus and enter the throat and some of it can trickle down the trachea immediately next to it and she can choke or worse, suck the sour liquid into the lungs.

Your hen seems to me to have pendulous crop which is a chronic condition. It's likely the reason she's weak and declining now - she may be starving. The clue that not much is making it into the lower intestine to distribute nutrients and calories is the green poop.

First, she needs a crop bra. You will need to make her one. You can buy them off the internet, but none will fit as well as the one you make for her size and configuration. I provide the very basics of a pattern here https://www.backyardchickens.com/ar...w-to-know-which-one-youre-dealing-with.73607/

Once her crop is emptying overnight again, and it might take several adjustments to the bra to get it supported just right, her appetite will naturally return. If it doesn't, it may be because she's too weak to eat, and you might need to tube feed her to get her over that hurdle. We'll talk about that later.
You must log in or register to reply here.
Share:
Reddit Pinterest Tumblr WhatsApp Email Link