7 wk old baby off her legs

Went to let everyone out the house this morning and my favorite runner Squidge is off her legs, just sat there quacking at me as they all ran out the door and left her.
Hands up I admit I havent given them any Niacin in their water since last week, but they do get fresh fruit, veg, minoes, crickets... every day. I was also giving them Pedialite in their water but threw out the bottle when they moved outside.
Ive just filled up their water with Niacin, Squidge is on the porch of their house in a see thru plastic tote with Niacin water.
Im going to get my groceries in the next hour....anything you folks think I should get while im out to help her along. I know I need to get some PoliVisol, TSC is in the same area im going.
Going to have a shower and hopefully someone...Katherine can come slap my wrists and put me and Squidge on the right track to a healthy life again. Thank You. xxxx Nicky

That's a bit odd, becaue she should have not run out of vitamin b3 that fast. Perhaps she has a problem absorbing it. Well you know the routine, put her back onto the niacin and hope that it was it. If it fixes it keep her on it until she is 12 weeks old, because that is the time they still need it for growing. Any green vegies are full off it.

Quote:
Yes I know, thats what I thought. So we are back to the Niacin, I bought Chick saver, electrolite stuff you mix in with water, plus they have just had lettuce, peas, tomatoes and grapes. Also bought some Poly Vi Sol and gave her some of that. She ate the peas and a bit of tomatoes thats it. She is kicking her legs out the back of her and swimming on dry land so to speak then she unbalances and topples over onto her side and cant right herself, but she can walk if i hold her up and when I lift her up to put her back in the tote she kicks them legs all over the place. No idea whats going on, the rest of them are fine, hopefully in a day or so she will be fine.

Well I expected to go out to find a dead duck yesterday but no, she was still in the tote, still unable to walk. She hasnt eaten much duck feed, but she had a good load of peas and a mixed salad of lettuce, toms, grapes, gave her more Poly Vi Sol, Niacin in her water. I put her out on the grass with her duckling sisters, they avoided her like the plague..its like they know something is wrong and would stand at a distance and quack at her, she has a quack but it was alot quieter than normal, usually she is the noisiest of the bunch and the 1st to come running to what ever is in my hands. I just hope she is still there. I dont know what is wrong, I dont even leave out food that is left over from night time, I throw it out, clean pans and put fresh out for every meal, so I know she hasnt eaten any mouldy food. Its still dark out so hopefully I will go out in half hour or so and see if she is still with us. Fingers crossed she is on her feet.

How is she doing?

Not to good. Lost weight, isnt eating today, not even peas, Im going to the vets tomorrow to put her to sleep. I cant let her suffer any more.

Awww, that's too bad. I hope that the vet checks her out before he puts her down. Maybe it's something that can be easily cured with medicine. 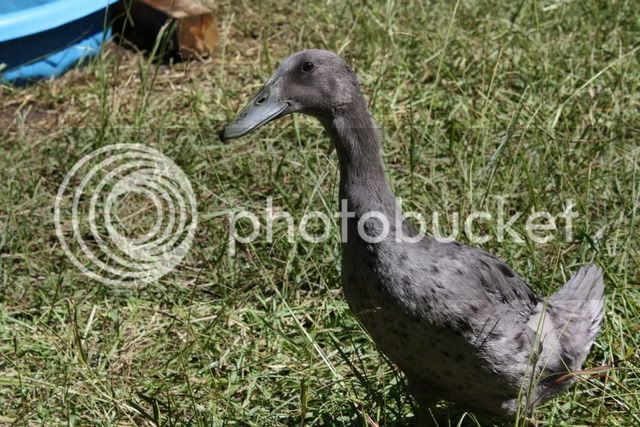 Squidge was taken the vets this morning and put to sleep. She had lost alot of weight and peeped when ever I picked her up, sort of like she was telling me she was sore. I didnt want her to suffer any more
R.I.P Squidge

I'm so sorry about your duck.

Awwww, poor Squidge. She looked really happy in that photo. I hope she had a happy life even though it was short.
Last edited: Oct 11, 2010