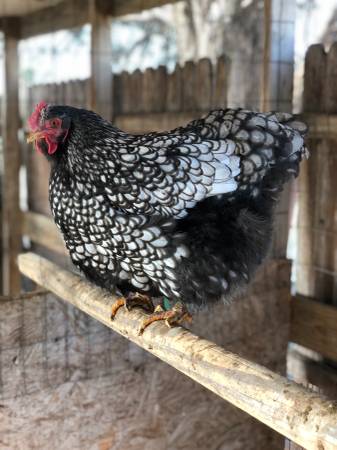 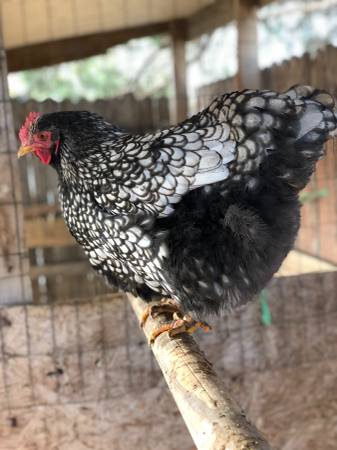 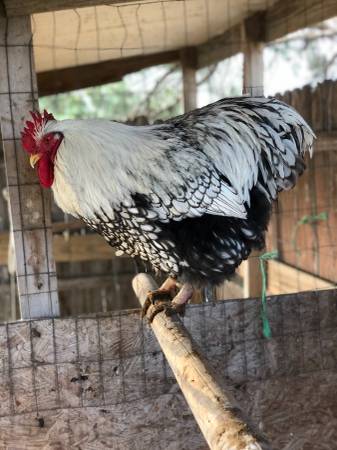 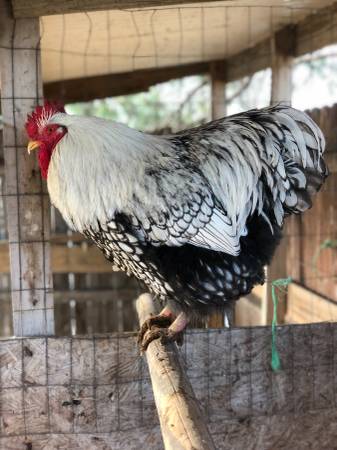 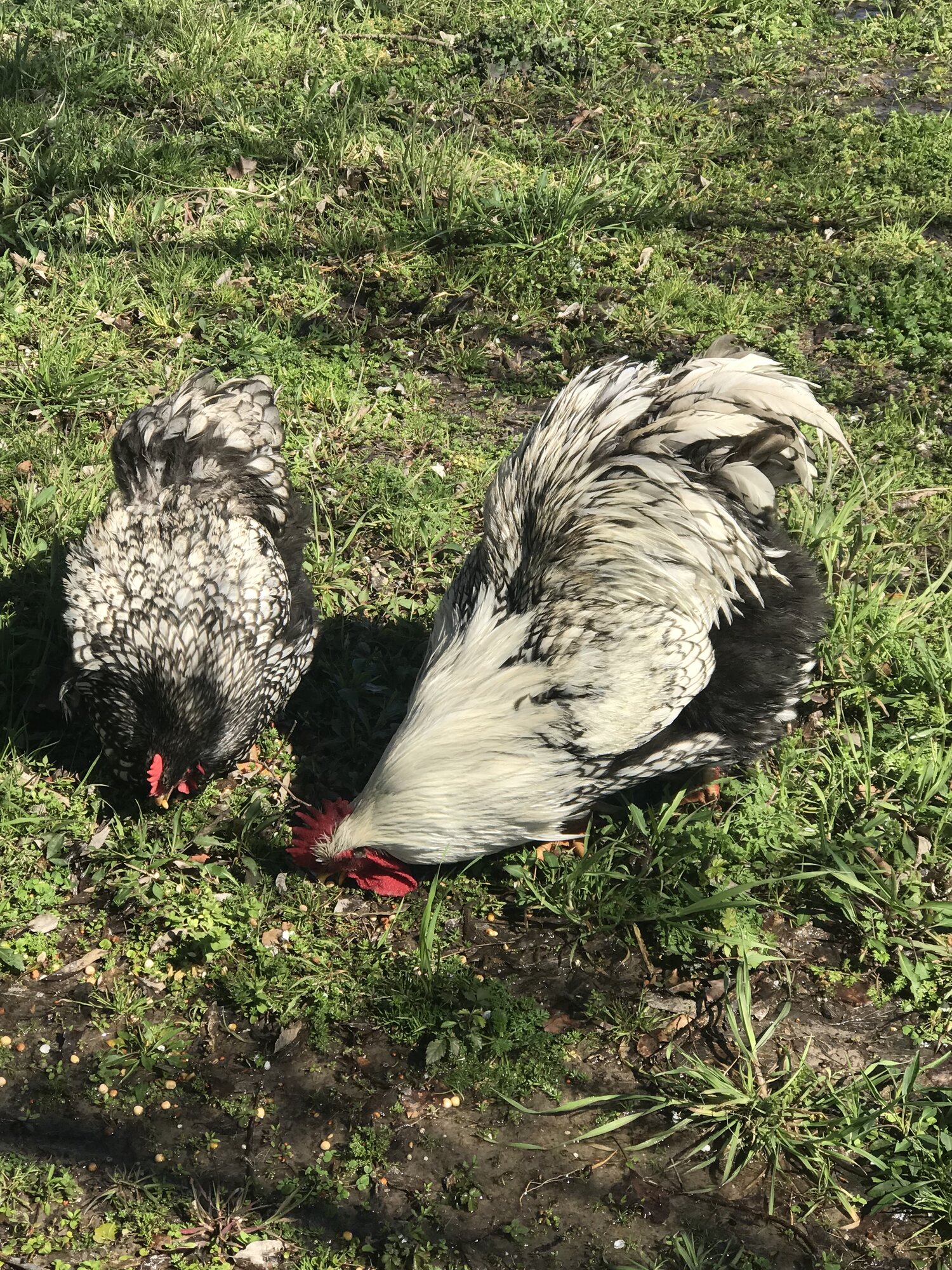 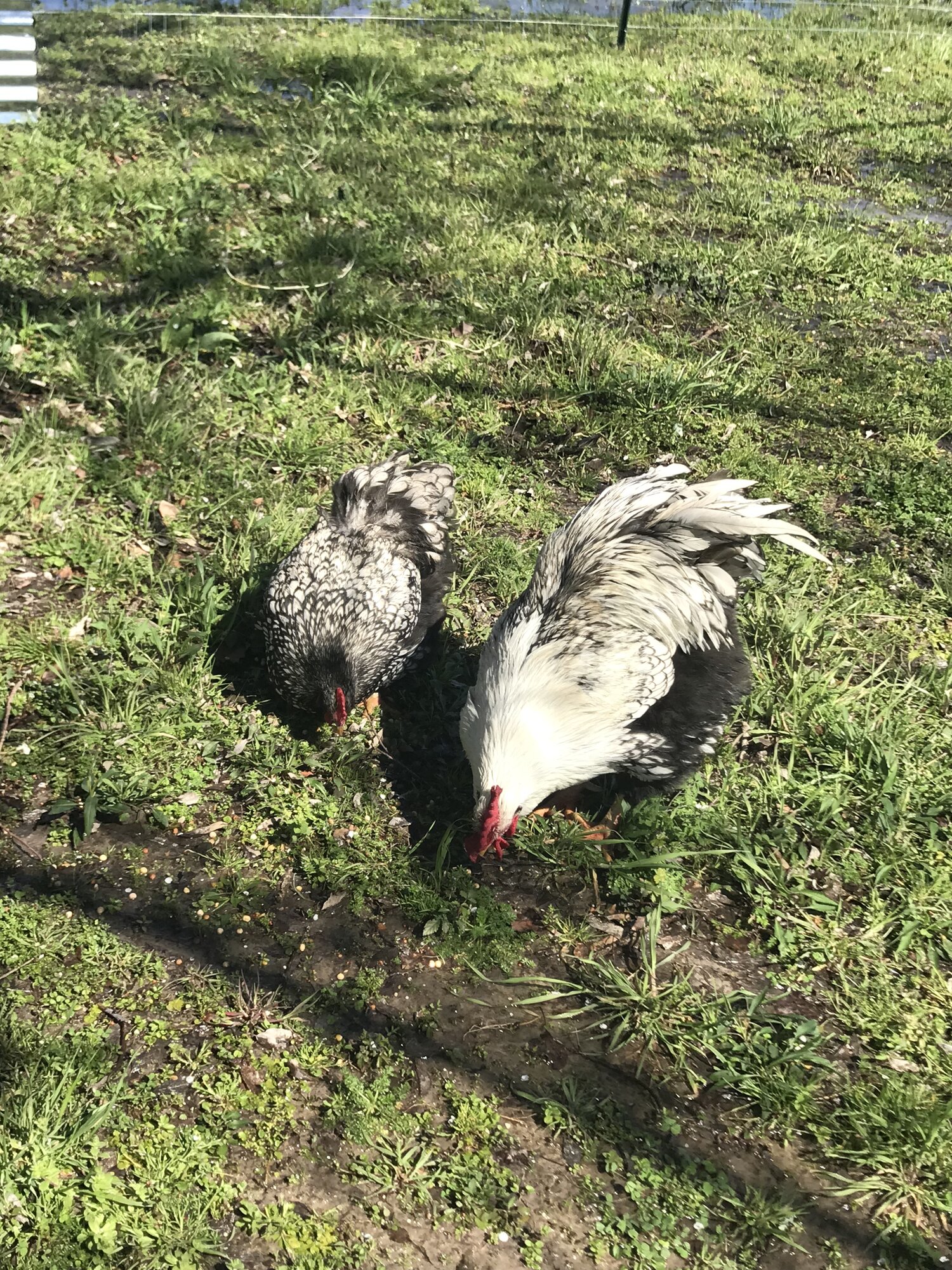 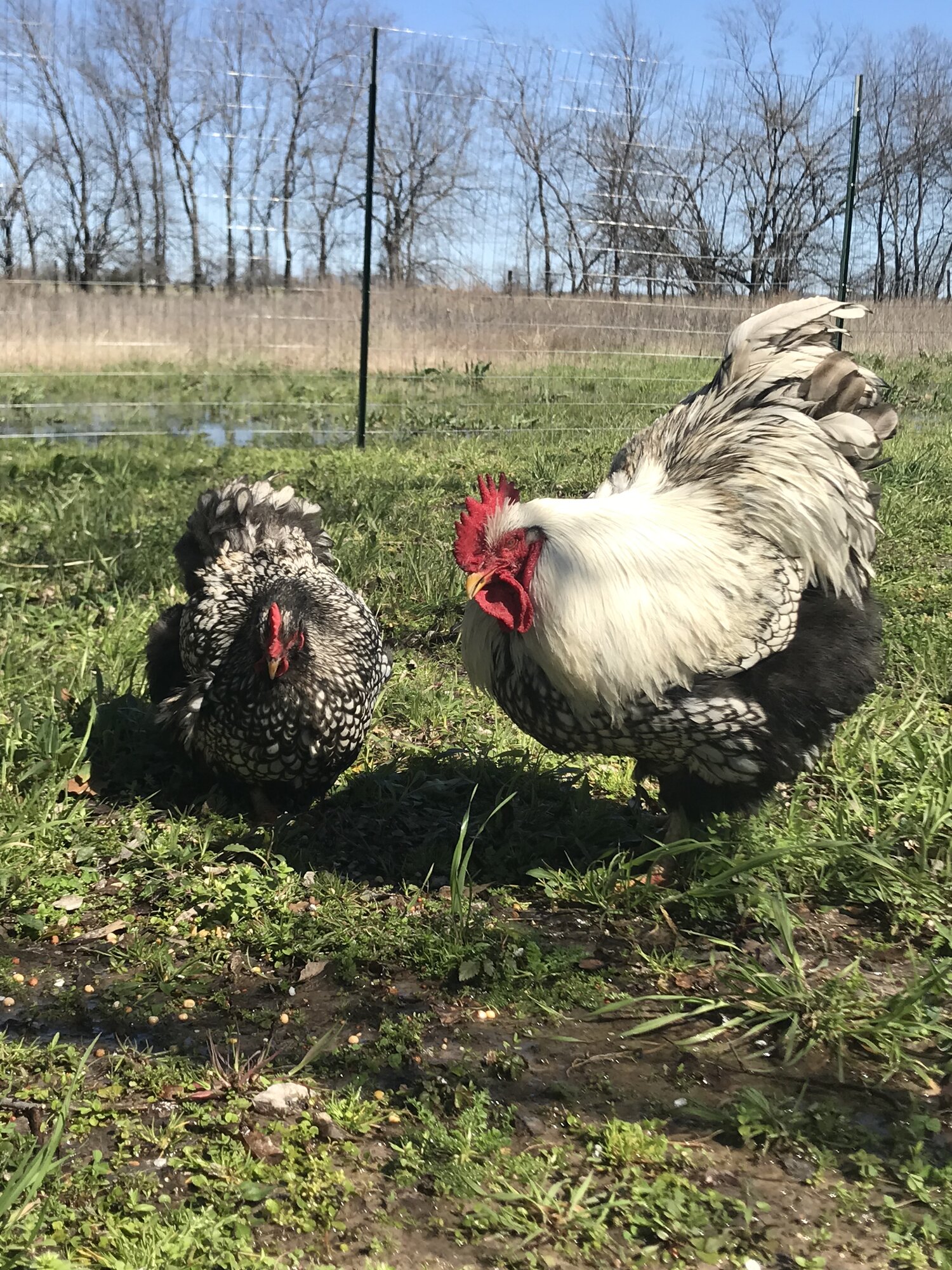 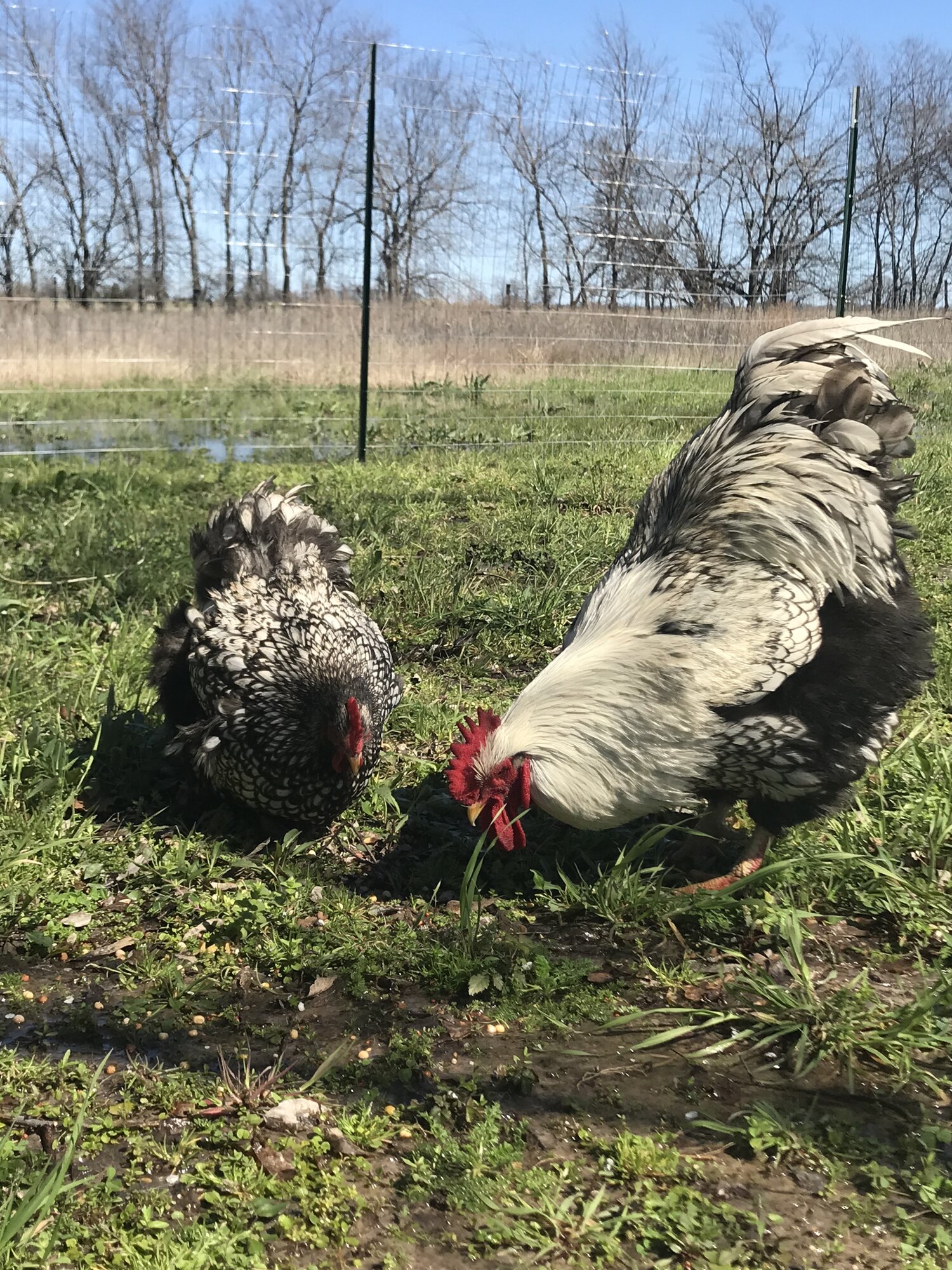 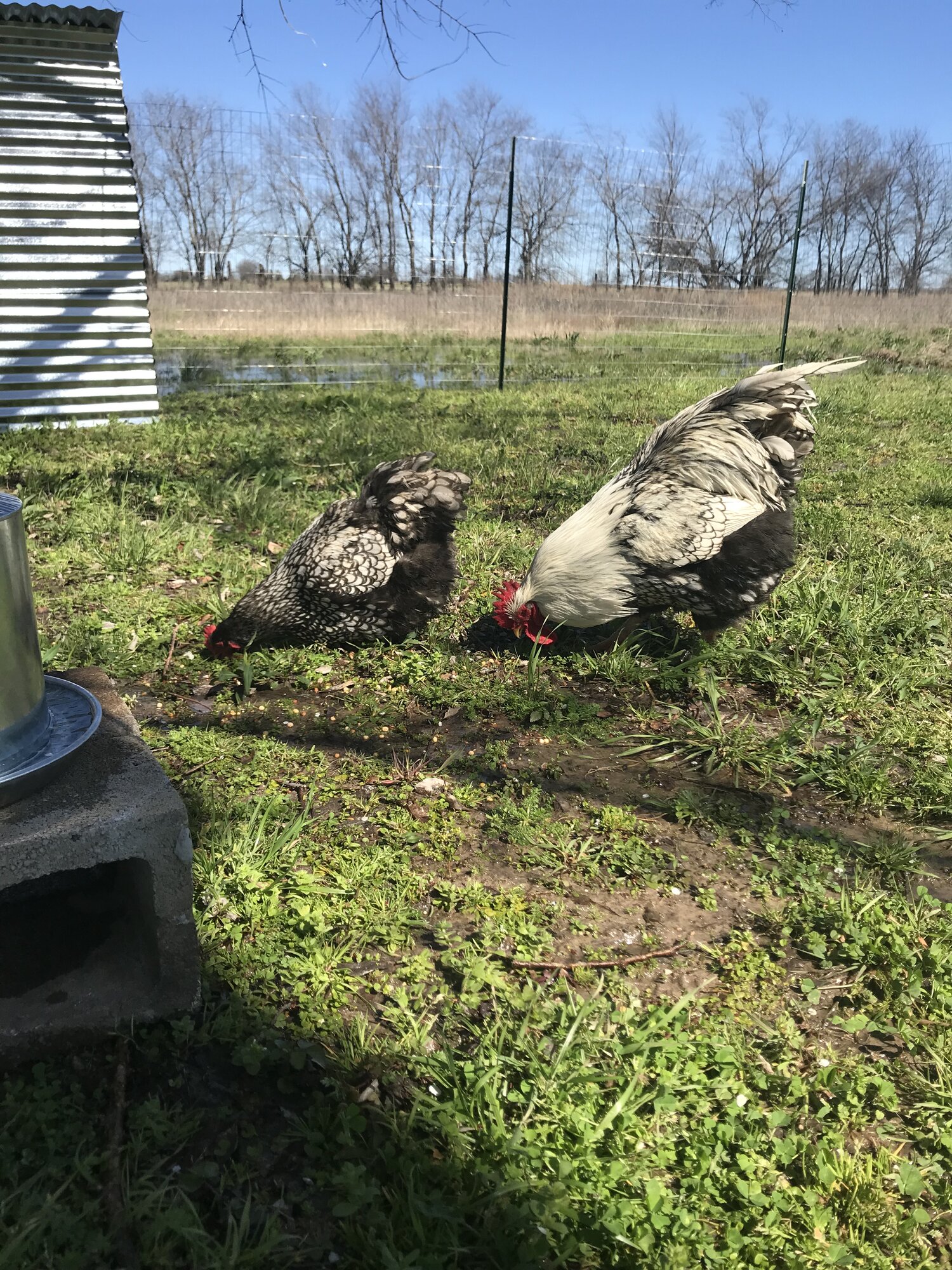 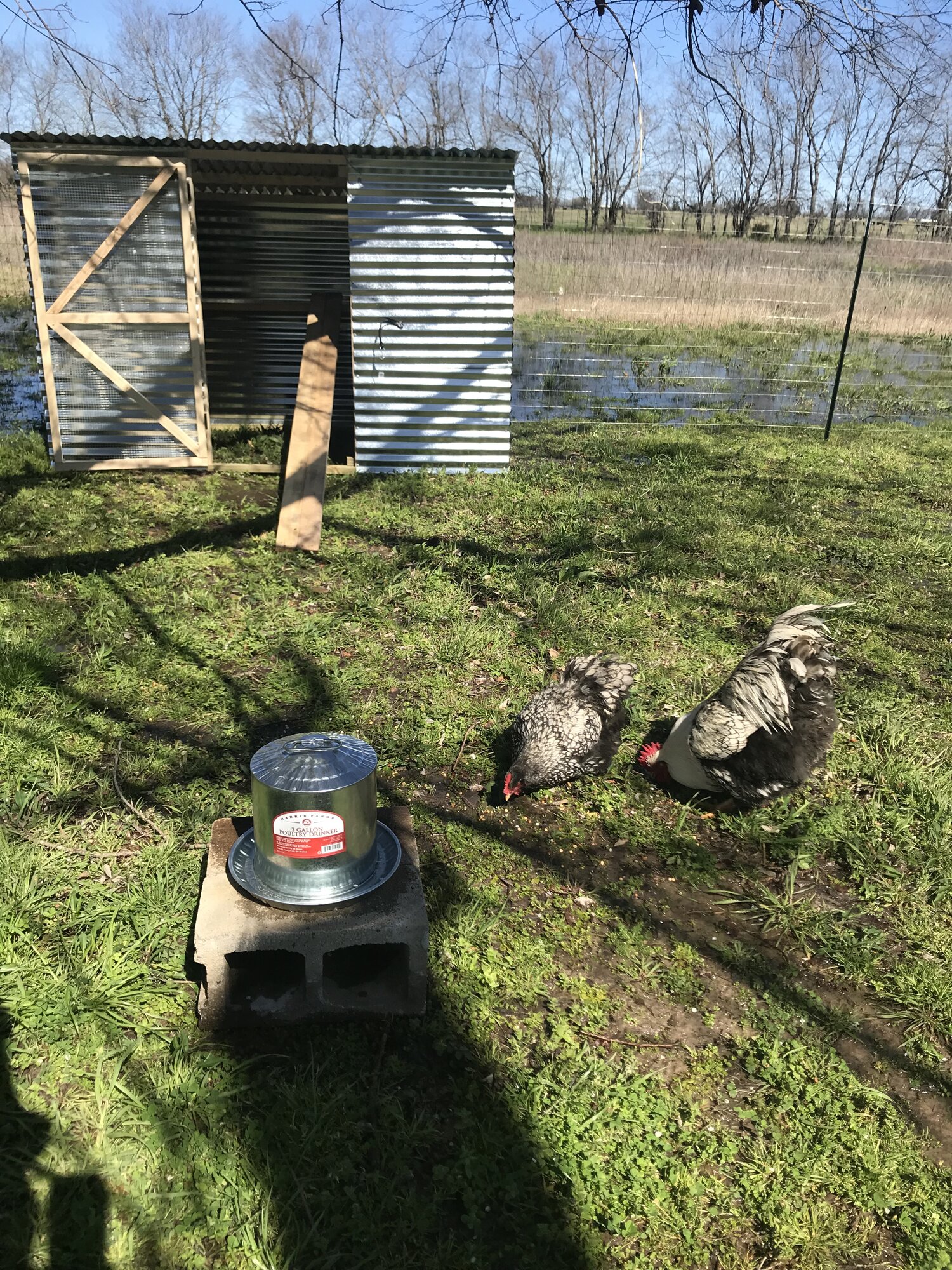 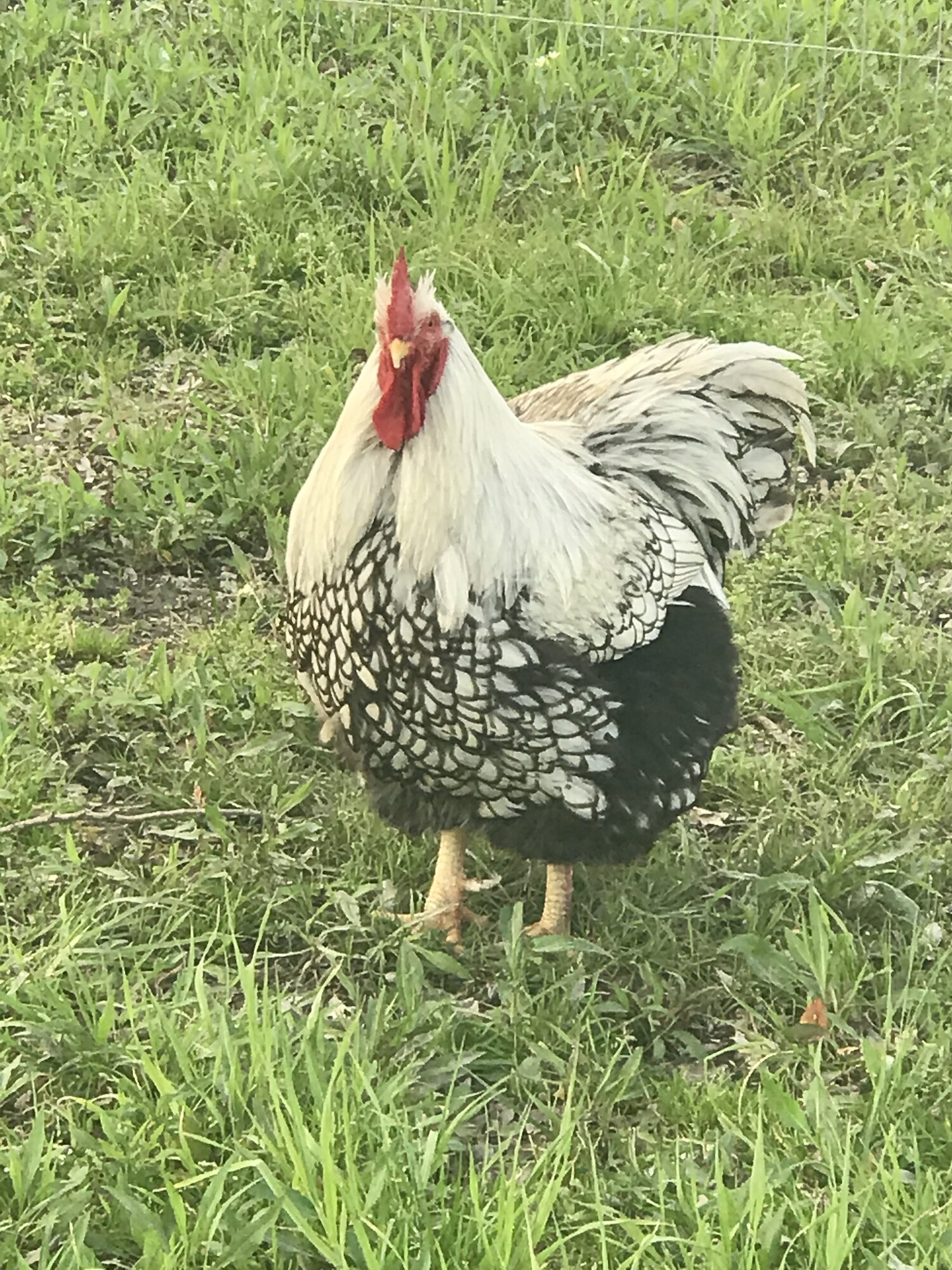 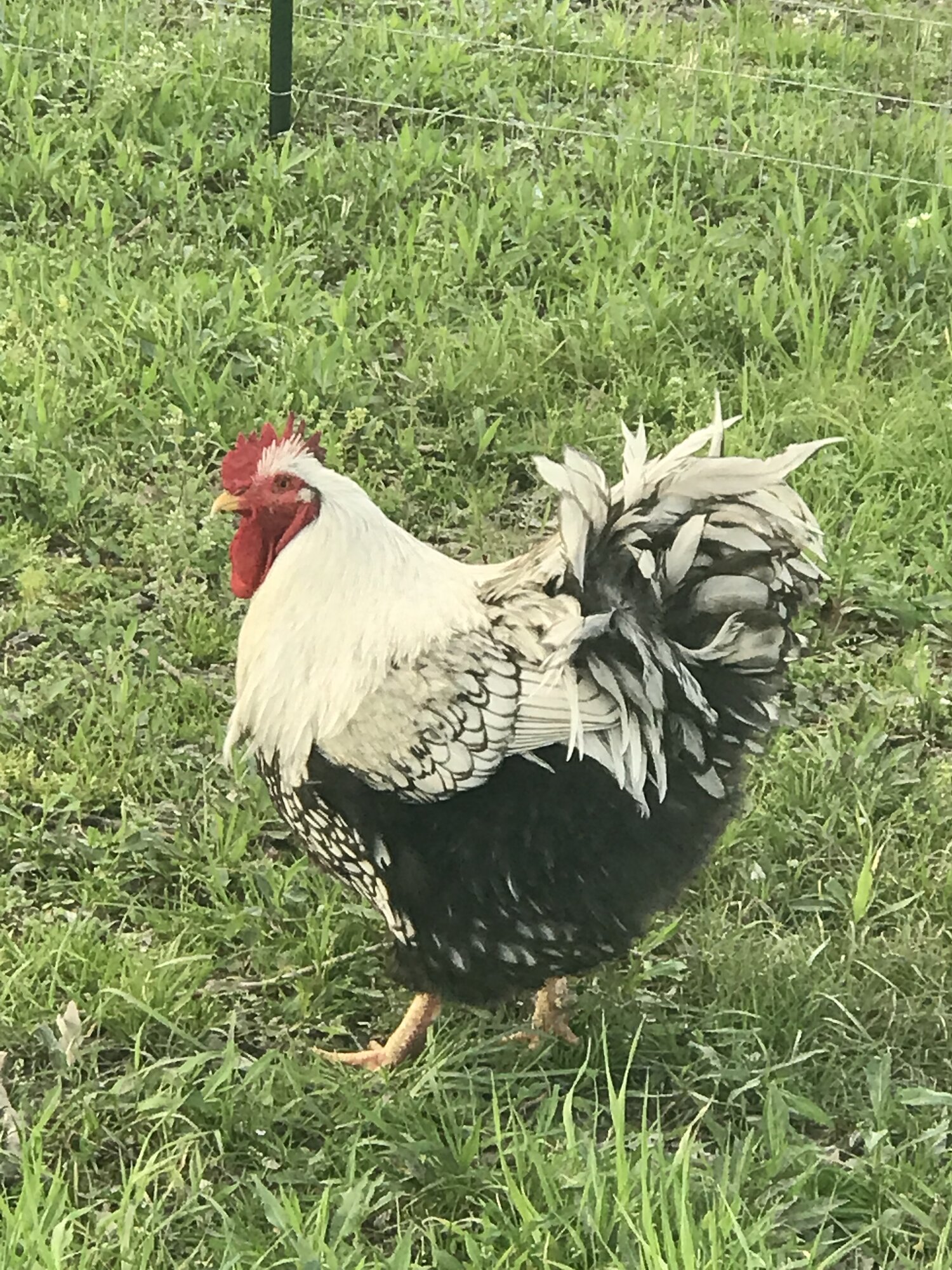 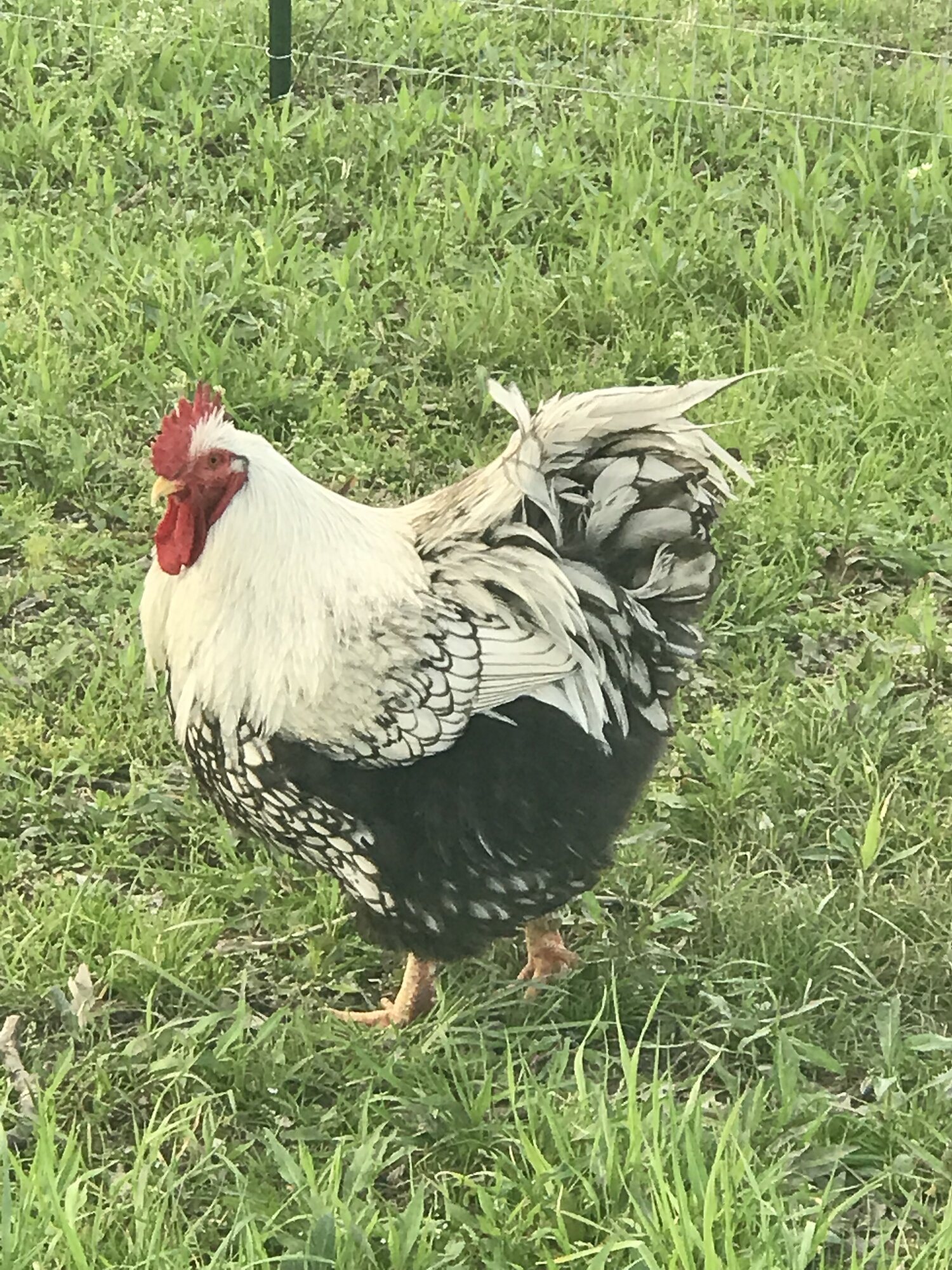 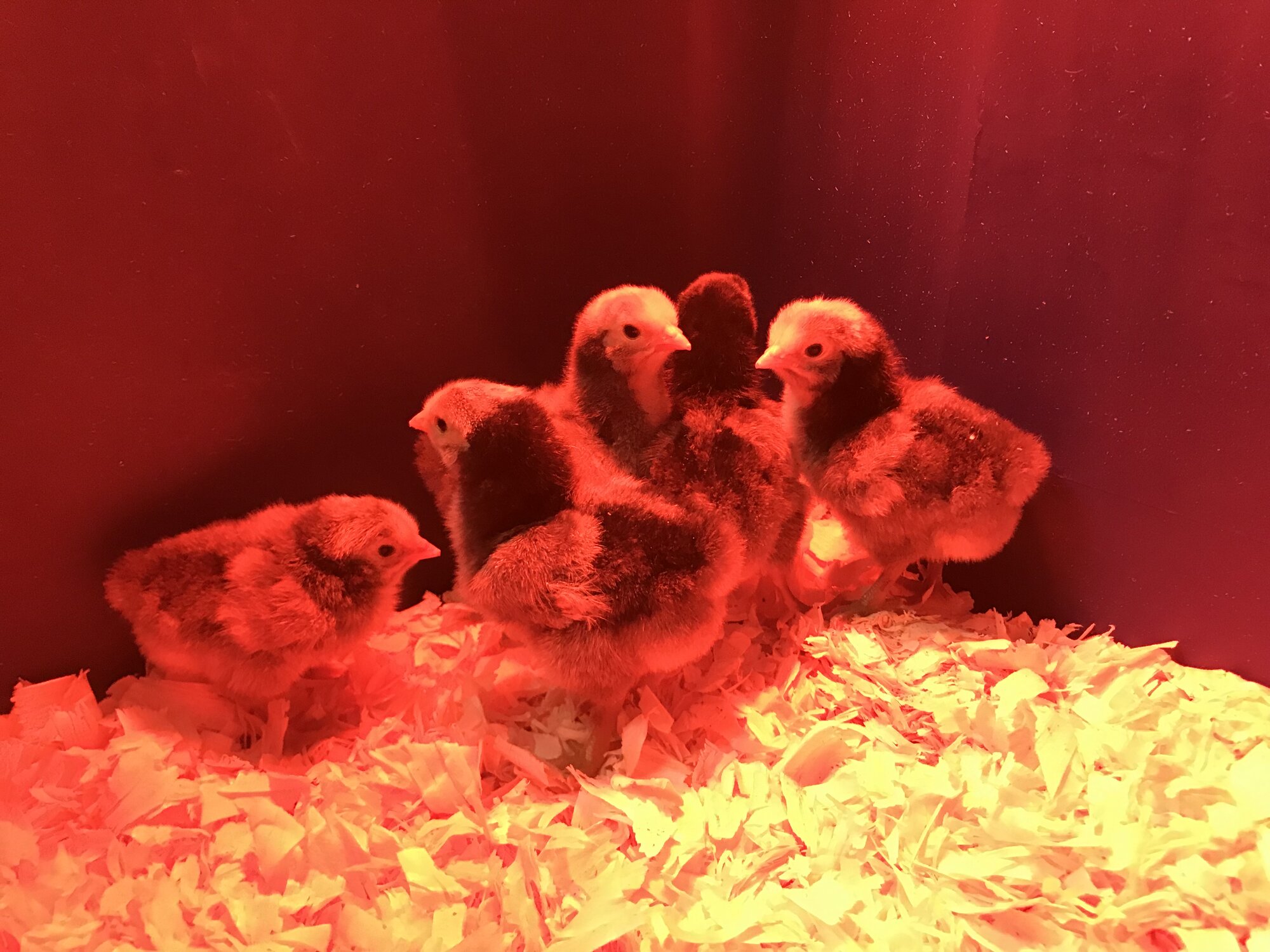 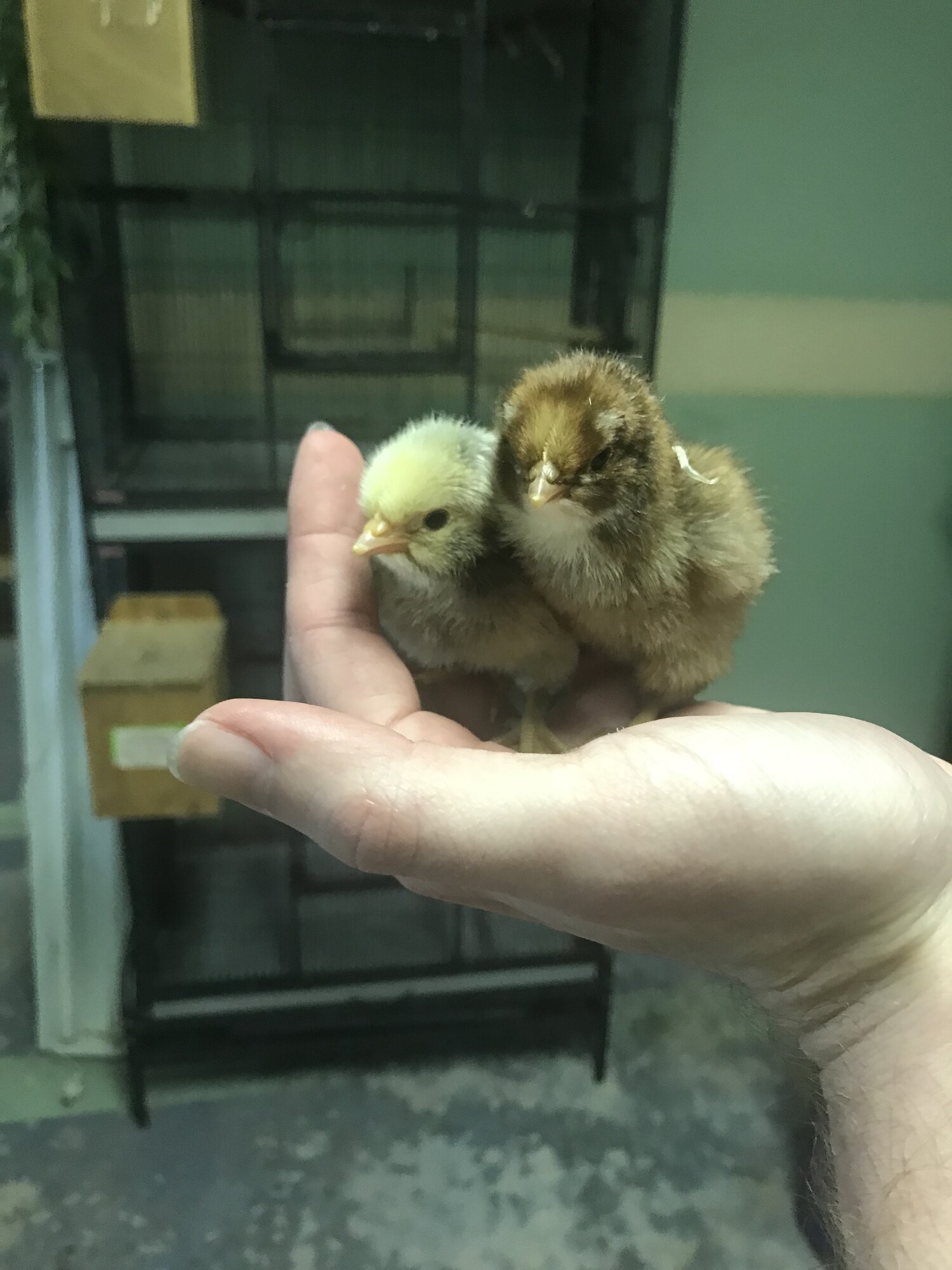 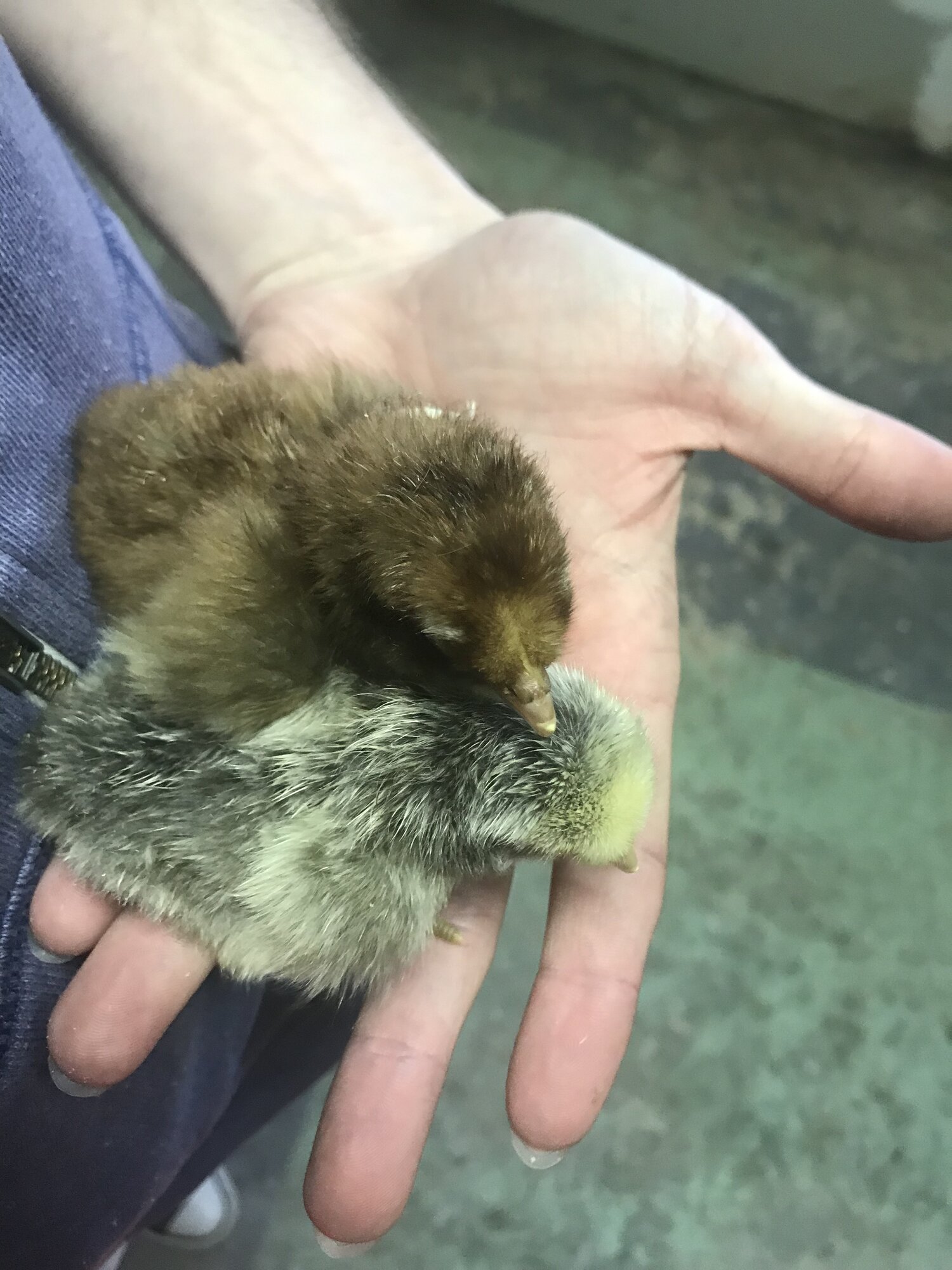 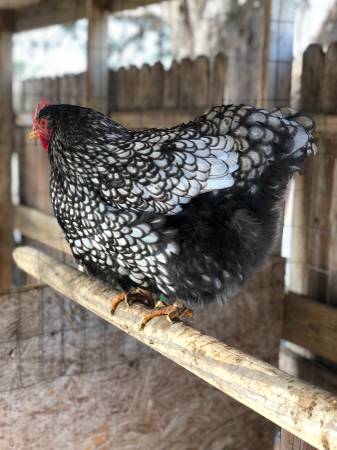 They are beautiful love that lacing are the chicks same breed? Babies of the two adults?

Yes. Those are all chicks produced by that pair. I found the little rusty brown chick in the incubator yesterday. The Orpington people on Facebook are telling me it looks like the rooster must be split to Gold-laced. Which means he can throw Gold-laced chicks. I'm going to ask some of the genetic buffs on here though to see what they think and get the statistics for producing the color. I have never gotten the hang of using that chicken genetic calculator. I can do Gouldian genetics all day, but using the gene codes throws me for a complete loop.

Well you already lost me but I hope you’ll post pics as they grow I’d love to see how they feather in. Congrats on that hatch!

Any idea why Georgia isn't sitting on all of her eggs? The ground has been staying so wet I can't keep the hay dry where she's been nesting. So before she even started brooding I put a jumbo cat litter box in there with some white pine shavings at the bottom and a bunch of hay. She proceeded to lay two more eggs and started brooding them. I checked on the eggs Saturday or Sunday while she was off the nest and there were only four eggs, not six. So I poked around and found she'd rolled two of them out of the nest and against the litter pan and covered them up. I returned them to the nest hoping I'd just pull them if they were too far behind (it's impossible to candle them outside in the daytime). I went out there yesterday and there were only two eggs in the nest. I rooted around and found four eggs moved out of the box and buried. She'd cracked one pretty badly. I checked just enough to tell it was fertile. I didn't want to see how far along it was. I tossed it and returned the other three.

I fired up the styrofoam incubator last night and the thermometer I had in it was reading 99.5 last night before bed. I forgot to check it this morning, but if I get home and the eggs aren't under her, I guess that means I'm taking them? I don't think they will fit in the automatic turner which is most annoying. I hate hand-turning eggs. Any advice on incubating the eggs? Or getting her to keep them in the nest so I don't have to? lol

Maybe the cat litter box isn’t large enough do you have a cement mixing tub? That may work. Mine usually just laid her eggs right in her shaving I use deep litter. Look in the sticky’s at top of the goose forum start page you’ll se Pete’s guide it’s a great source of information.

If anyone more experienced would like to chime in over here it would be greatly appreciated. I didn't want to cross post, so I'll just link the thread to my question in the incubation forum here...

Well I got home yesterday from work to see Georgia pacing around the pen and not on her nest. I thought maybe the goslings had started hatching and she got upset and got off the nest. But the more I watched the more uneasy all the poultry seemed to be. The chickens and her were both nervous and Golly was being really vocal. So I threw on a pair of mud boots and went over to check on everyone. I could tell something was wrong but couldn't put my finger on it. I can see her nest from the door to the chicken house and there were two eggs rolled away from the nest. And then I realized what I thought was a wet limb from the tree over the house on the floor was another rat snake...who had eaten three of the five eggs that were left. This snake was honest to goodness at least eight feet long. I wrangled it into a trash can and took it a few miles down the road and released it. As a parting present the stupid thing threw the three eggs up into the trash can. It was not pleased with me.

I moved the two eggs into the incubator, but I don't have much hope for them. They are due anywhere from Tuesday through Friday or Saturday I think if I calculated her incubation correctly. I wish I could candle them, but the Incubrite candler I have isn't bright enough. I'll try tonight in the dark to see if they are worth leaving in there. In the meantime Georgia seems to be thoroughly broken up and not upset about not being a mother. She grazed the rest of the evening and slept with Golly. I'm sure the chickens are relieved to have her out of the pen.

I had another snake Thursday morning. I'm about tired of snakes. One of the eggs started seeping in the incubator and I tossed it. The other one clearly had a gosling in it, but I think it may have died. I don't see movement. But I'm going to give it just a few more days to see if it's behind because of her inconsistency. :/

Well I ended up tossing the last egg last night. It hadn't hatched and appeared that the gosling had died in shell during the incubation period. It was so close to hatching too. :/ Oh well, I suppose there is always next year.
You must log in or register to reply here.
Share:
Reddit Pinterest Tumblr WhatsApp Email Link