Anyone have any ideas???

My flock has been losing some feathers so I got out the DE and went to go dust them and found this on my roosters backside. Any ideas??

hmm is it blood?

OldEnglishGameBantam33 said:
hmm is it blood?
Click to expand...

Not blood! It’s like.... chaffed skin but also raised. Like it could be a bite or some irritant!

It could be a bacterial infection.

I use this stuff to kill them, they die almost instantly when they touch it. Unfortunately I do not have any picture of birds suffering from mite infestations so I can not show you comparisons. I am not sure if the mites cause the scabs by sucking the blood or if the bird causes the scabs by itching at the mites.

Nvm, I do have pictures. Here is a rooster that had a horrible mite infestation. Last year when he was molting I saw some reddish skin on his rear and I thought it was from hens pecking his new feathers coming in, I separated him and the new feathers came in so I brought him back in. I think it was only around a month ago when I was checking up on his feet for bumblefoot that I realized it was still red down there. I looked closer at it this time and there was hundreds of mites on him, it was disgusting, I sprayed him down and he has not had problems since. The mites were actually sucking the blood out of the developing feathers and preventing them from developing properly. This picture was taken a few days after I sprayed him during the night time, I was checking for mites again.

It is still very red but new feathers were starting to develop properly again. I think the red irritation was cause by the rooster itching in this case. I have seen birds with worse mite problems that show almost no skin irritation or scabbing.

I did have problems this summer with meat birds getting mites, I had them in chicken tractors and they got them real bad. Those CX are horrible at taking dust baths so mites love them. I saw scabbing and irritation around their vents, it was in a very small area though. I think that is caused by the mites because I am pretty sure half of those birds could not even reach their rear.
Edit: you can see the scabs that I was talking about in the first picture, they are the brown spots right next to the vent, this is the area that I have seen mites feeding from, they circle around it and have a big party.

I don't see any mites....looks like swollen bumps on skin above vent.
Not sure what's below vent...more swollen skin 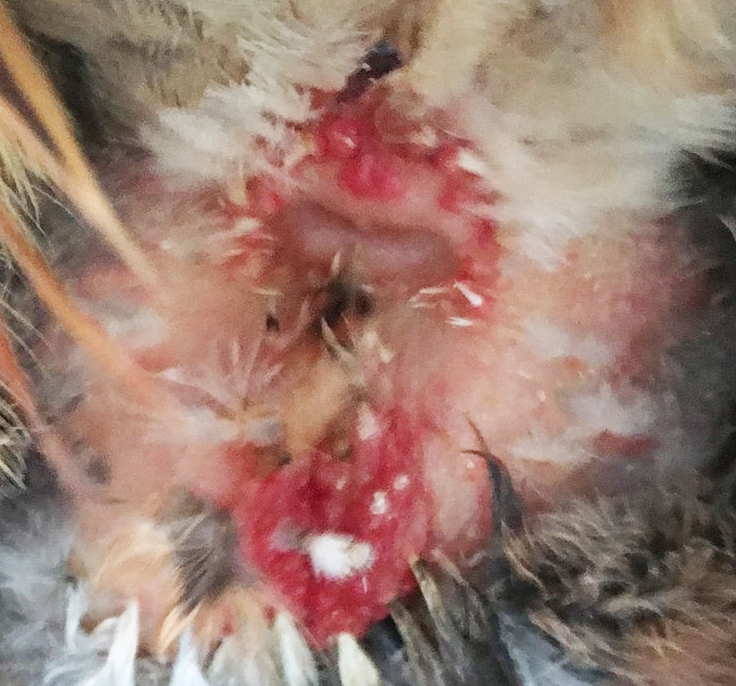 S
What the heck??

A
Feather loss at the base of tail