I have, I think, 2 female and 3 male call ducks that are 2 months old. They are pretty imprinted on us and my kids would be heartbroken if we got rid of any of them. I do know that this is a bad ratio to have though when they are sexually mature and I also do not want any more ducks any time soon. Questions: What age do I need to separate them? Can I keep the two females with one male and the two other males separate by fence in the same run, or should I keep males and females separate? 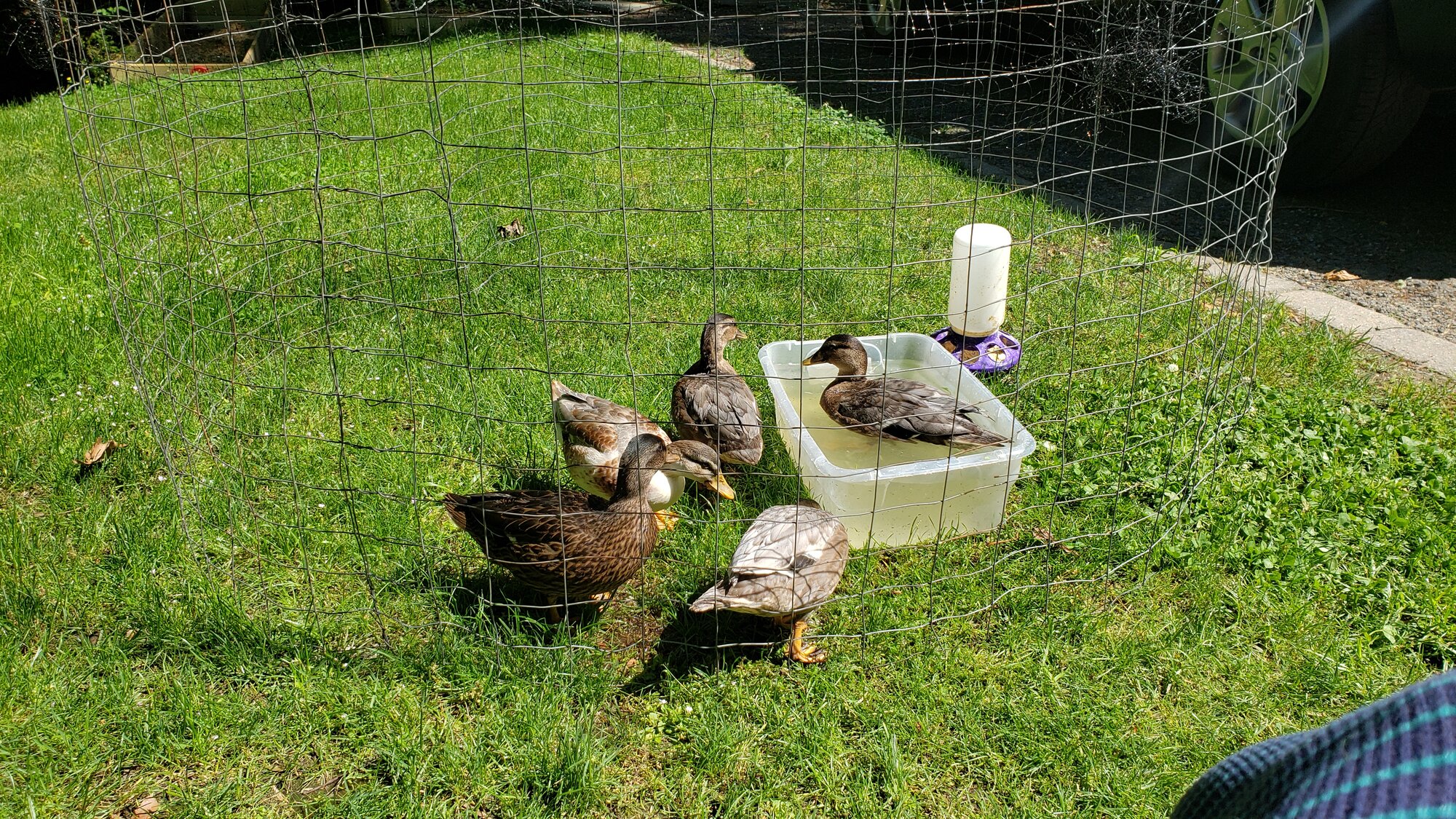 Here's our temporary day set up when we are home. They still are in the house at night and when we are gone. (Gah!) The backordered hardware cloth finally came in, so working on getting the permanent pen completed this week, hopefully.

I think it really depends on the ducks. I know my calls are much less nasty with the hens than my standard ducks. Mine typically pair off, and I've even had more drakes at one point than hens, and the hens were not abused. The boys fought a little with one another more than anything, which I am personally ok with over my hens being damaged in any way.
Suppose you could always just wait to see if there are issues, and separate them then. You'll see right away if it's going to work out Or not.
Best wishes! You have a lovely little flock!

Call ducks as I understand it are seasonal mating ducks. So you will likely have about 8 months before you need to divide them up. Calls tend to start mating around the spring when light starts getting longer.

Knighstar679 said:
Call ducks as I understand it are seasonal mating ducks. So you will likely have about 8 months before you need to divide them up. Calls tend to start mating around the spring when light starts getting longer.
Click to expand...

They mate all year round. Just more in the spring .

Isaac 0 said:
They mate all year round. Just more in the spring .

I was not aware. I had read otherwise. But that is very good to know

It's tricky and i will say somewhat depends on personality, I'll give you an example my main flock had 4 females and 3 males... the one male being a baby from the previous years hatch he was fine there all last summer, fall and winter, spring hit? when the females resumed laying and all heck broke loose the mature drakes turned on him.

I removed him and paired him up with another drake, it's working just fine that way. Ideally speaking at least 2 females per male, often calls are kept in trio's, though i have had pairs...

For what you can do that truly is up to you, you can do a trio or if you prefer break it down by male/female and house them where the fence separates them but they can chatter away to each other.

I have pulled all my drakes right now due to my nests hatching, so it's quite possible to run all female and all make flocks just fine.

S
Should I keep my ducks separated?
2

A
Need help with aggression in mallards