A few nights ago I saw a raccoon sniffing around my coop. I don’t have time to stay up all night hunting raccoons, so I bought one of these: 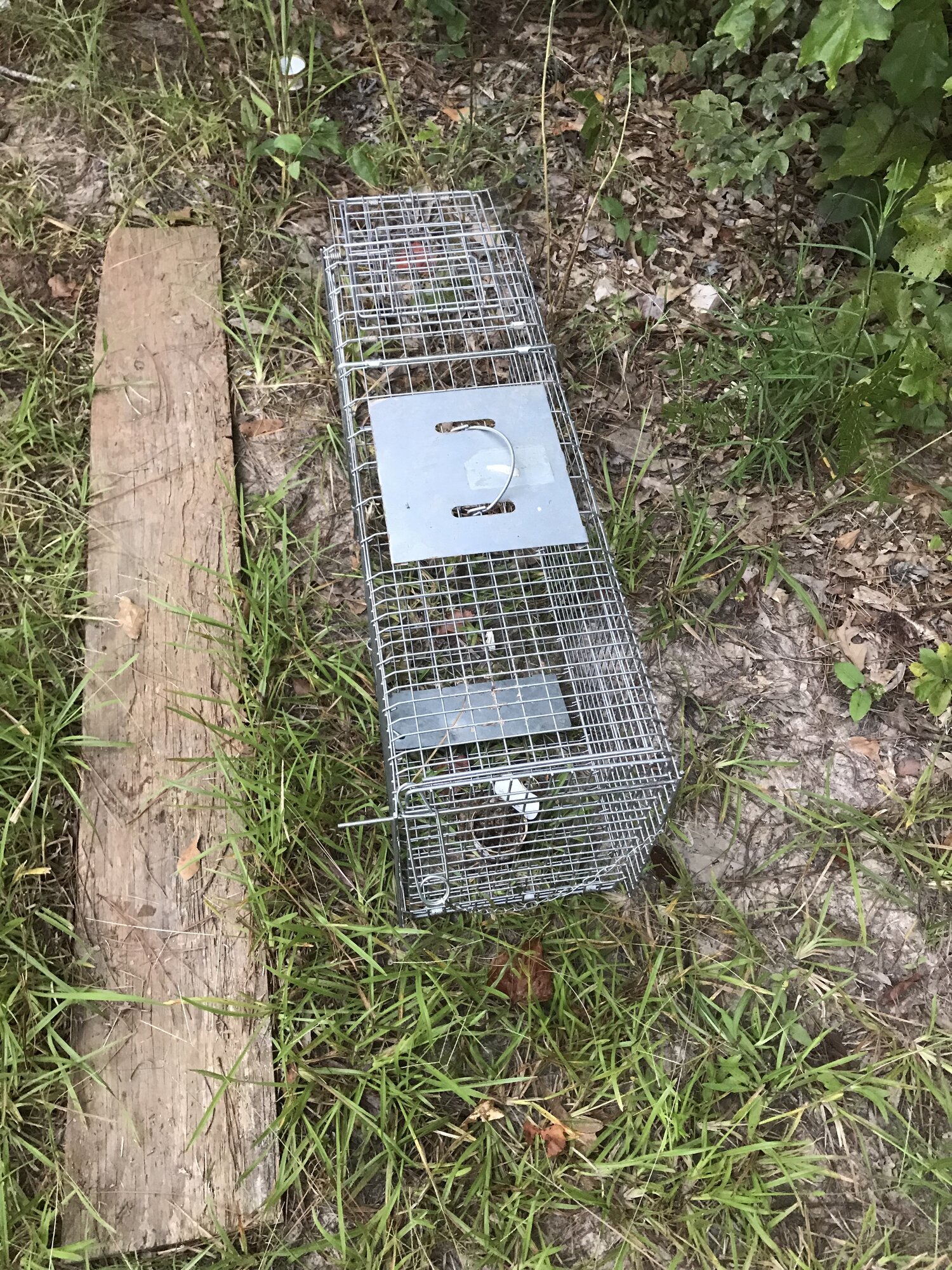 I’ve hunted and caught just about every critter and fish there is in the Southeastern US but I’ve never had a reason to use a trap before. So I had a bit of a learning curve to deal with. I baited the trap with a can of Fancy Feast chicken breast with gravy (everyone in the Southeast likes gravy, so why not). I put the trap against my run close to where I saw the raccoon enter from the wood line to approach the coop. I also threw some left over fermented feed in the trap. Three nights and nothing.
Yesterday morning I checked the trap at daylight, 6:30am. Still nothing. At 8:00am, when I left to take my daughters to school, my youngest got in the car then yelled, “YOU CAUGHT A RACCOON!”.
I got my girls to school and came back home to dispatch the raccoon. 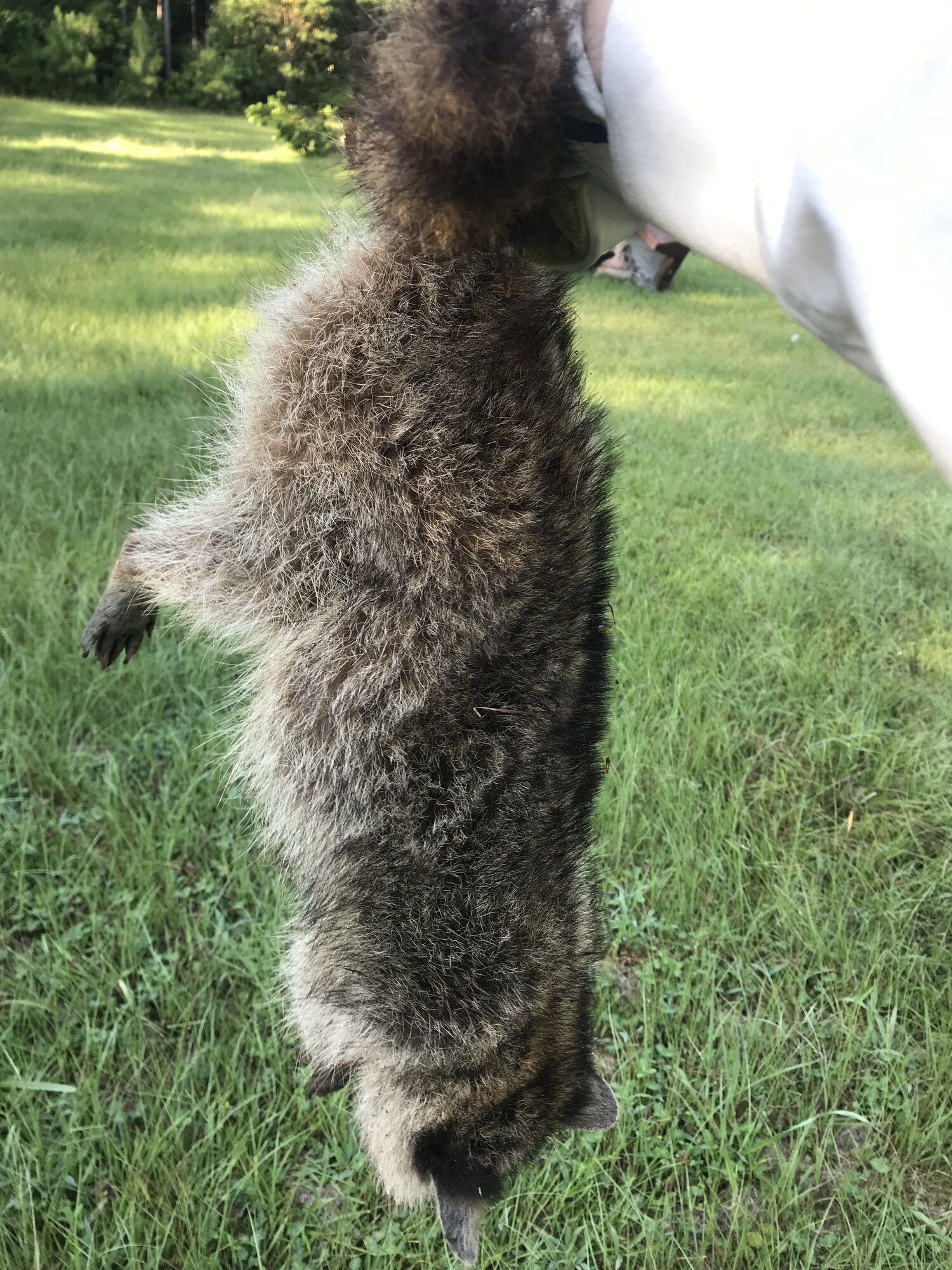 Did so, then inspected the trap. I found the the raccoon was able to pull the can of cat food out of the trap without tripping it. What got her was the fermented feed. She went back in and was eating it when she sprung the trap.
Good news: I caught the potential chicken killer.
Bad news: we saw two more big juvenile raccoons in the woods that didn’t get caught.
Now I have two raccoons that are probably trap wary.

Lessons learned: 1-dump the cat food from the can into the trap so the raccoon can’t pick it up and carry it out. 2-I’ll camouflage the trap with pine straw and leaves in hopes that the other raccoons will not recognize it in the future. 3-I’ll now move the trap to a different location.
4-I’ll also set up one of my game cams to monitor the activities of the predators so I’ll know if they are bypassing the trap now.

I see so many posts on here asking how to handle predators and it seems the first answers (including mine) are to install a camera. Well, that’s good but a camera won’t kill the predator. A trap and a .22 will! Install a trap of some kind first then install a camera to help determine how or where to place the trap.

Typically, game cams are set up by hunters to determine WHEN deer are moving and also to see the quality of the bucks in the area. In the past I have been able to determine to the minute when deer are going to pass on a trail or approach a food plot by using game cams.

So now if these other two raccoons won’t enter the trap, hopefully the camera will tell me their schedule which will allow me to hunt them successfully.

These are just my observations and opinions. I hope this long thread helps someone save the life of a chicken.

have had an issue with raccoons here as well....if having an issue with live trap, and still no time for “hunting” you may consider dog-proof toe trap. we set both types in addition to electrifying top of fence perimeter. took about a week but caught first “criminal” in toe trap baited with vienna wiener yesterday.....

Thanks, like I said I have ‘zero’ experience with trapping. I’ve never even heard of a toe trap. I’ll look into it and get those also.

We had an issue with coons here as well. We used the same type of trap, but I threaded a marshmallow onto a zip tie and secured it to the bottom of the trap. We caught two coons so far.

Good luck with your trapping!

Thanks. I already have zip ties and marshmallows on hand. (When you have kids, you always have marshmallows in stock). I’ll give that a try also.

I had a raccoon kill my two hens. Used the live trap and took him 10 miles out of town and released
Him . Haven’t caught any since
Any thoughts on raccoon proofing my coop as new chicks soon to be outside

Coons are smart, but one of the easiest critters to trap. A easy meal is their downfall. Especially if young. Client Had a family of em in his barn. Mom was huge and the youths were getting close to being booted out.
Caught 3 in 5 nights. Mom got caught on the 7th night.

I'll probably get reamed, but that is ok, I am glad to hear that you dispatched the coon, catch and release is just passing on your problem to someone else, they are not fish.. everyone has given you great ideas for bait. I've been extremely blessed that I've not had a issue so far with predators, I've lost one chick, but I don't know that it was a hawk vs my other chickens picking on a new addition and ending up eating one of their own.

beckym1619 said:
I had a raccoon kill my two hens. Used the live trap and took him 10 miles out of town and released
Him . Haven’t caught any since
Any thoughts on raccoon proofing my coop as new chicks soon to be outside
Click to expand...

muddy75 said:
have had an issue with raccoons here as well....if having an issue with live trap, and still no time for “hunting” you may consider dog-proof toe trap. we set both types in addition to electrifying top of fence perimeter. took about a week but caught first “criminal” in toe trap baited with vienna wiener yesterday.....
Click to expand...

Just ordered four of them along with the setting tool. They should be here Tuesday. Can’t wait to try them. They do look like a much better design than a cage type trap.

T
The age old question: who did it?
2