I lost a few birds this time to CHF/flip, 4 so far, and I've culled another 10 before they could flip. 12 hour feed schedule. Still have a week and a half before we process them. The one constant in all of the birds I've lost or culled is excessive yellow fluid in their body cavity.

I have a number of syringes, all sterile. Since the fluid is building up I'm thinking of trying to drain the fluid, or a portion of it, to see if I can slow or turn around this process. Just looking to stem losses, or emergency culls, between now and June 4.

Anybody ever try this before? Any success?

Basically I would take an inactive bird with bluish comb, one on teh way downhill, and attempt to drain 20-50 CC's of fluid.

I doubt it would work. The fluid is not what is killing them, it the heart quitting, and the fluid is the result. I guess what I'm saying is that they don't die when the fluid reaches a certain level, they die because the heart quits beating. \\
It's a good thought, I just have my doubts. Please prove me wrong.

Hopefully I don't have another chance, but my birds are well over 9lbs right now. I know the fluid is caused by the illness, not the cause, but it does lead to additional pressure in the body cavity. I'm hoping that reducing the fluid gives the heart and lungs a little more room, allowing them to function a bit better.

Hopefully I won't have to try, and if the attempt goes wrong, I can cull the bird immediately.

I don't know if I would do that. My processor is state certifeid so that thier customers can retail their birds, they are required to destroy any bird with the yellow fluid in the cavity, they can't even give it back to you. I would assume that means it's probably not good for you.

you say yellow, but is it yellow (dark yellow) or straw colored (translucent, but yellow)?


the fluid is NOT the result of the heart quitting. fluid in the abdominal area is called ascites, and is due to "third spacing" associated with CHF.

in the hospital, people with fluid overload are limited to a certain amount of fluids per day, and their input and outputs are watched for matching amounts. chf also affects the way kidneys function, thus affecting how much fluid is removed from the body.

obviously, you cannot watch inputs and output on a chicken, but i would limit their fluid intake to see if that helped, over trying to remove the fluid from the body. the fluid build up is not just in the abdomen, it is throughout the whole body. the reason for the blue comb would be fluid build up in the lungs; essentially the chicken is drowning in its own fluids. if you removed it from the abdomen, it would return. if you removed it from the chest cavity, you pretty much are guaranteed a collapsed lung, and even if you were successful (you won't be), it would just return. the fluid is not just something you can take off and everything will be fine. there is an underlying issue that will just cause its return.


all this is said based on knowledge of human CHF (if this IS CHF). knowing the problems these meat chickens have, i could definitely see how the mechanism would be the same. your best bet would be to restrict fluid intake, but that would be difficult

there is also ascites associated with liver failure, but because of your report of a blue comb, it sounds there is hypoxemia present
Last edited: May 24, 2011

Removing the fluid wouldn't help lung function at all. Chicken lungs don't expand in the way that our lungs do.

it won't matter if they expand or not, if they're filled with fluid

Thanks for the additional information. Much appreciated. The ones I've culled had straw yellow fluid (clear).

Pardon the dirty bird. It rained a fair amount today. I had a likely candidate show up today. Classic signs, head down, purple comb, lethargic. 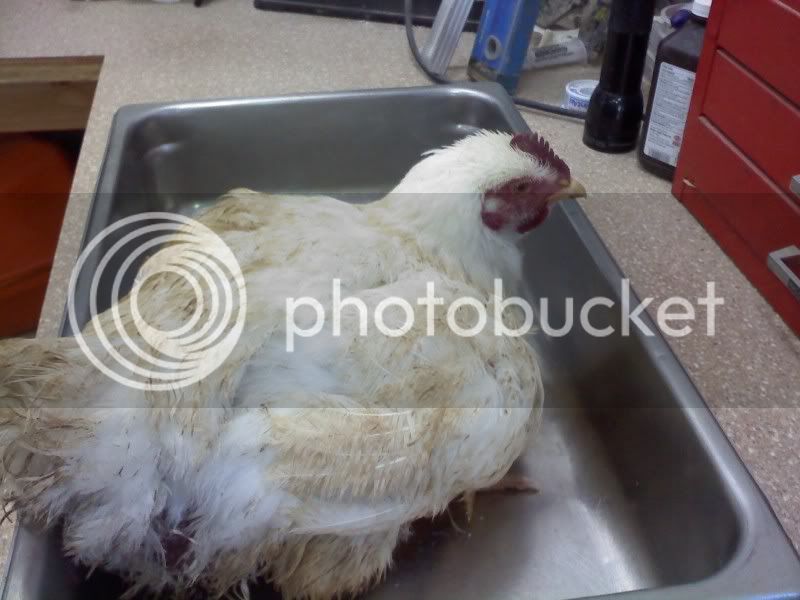 I decided I would cull the bird if this didn't turn out, so I decided I'd try to drain some fluid. 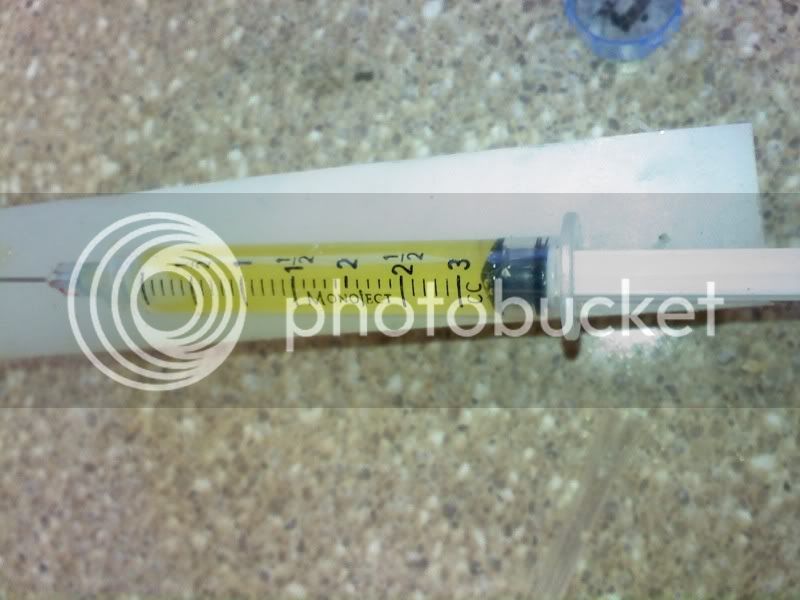 
I ended up taking out 66cc's of fluid out of the bird. Just left the needle in and disconnected each time to minimize "sticks". Emptied the fluid in the pan. 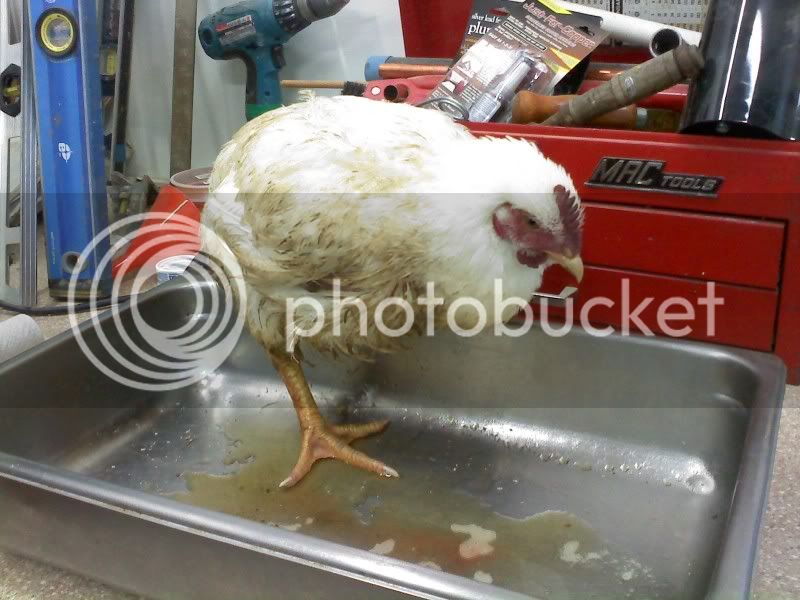 Things I noticed right away:

1. Breathing was much deeper. Looks as though removing the fluid reduced pressure on the lungs.
2. Bird activity increased. Stood up, walked around gingerly.
3. Comb color improved slightly.

At 9 pounds I don't see why you don't process them right now.