Bramble, our little Wyandotte, who is about 3 1/2 years old. She doesn't lay any more. We only had about 4 eggs this whole year! She is seemingly quite happy and scratches around but also takes it easy, standing guard in a weird kind of way. Her poop is normal, solid and pellet like. No skin issues that I can see. No traces of mites anywhere.

Yet she is mega pale. She looks almost ghostly in some ways, hardly and red in her face at all.

I know this can happen when they are hot, bothered or molting. She is none of those. She may be anemic but again, no idea why or how. More to the point, I don't know what to do for her.

This is her earlier this year and now. She has been this pale since she molted in the summer (5 or 6 months ago) yet she hasn't got any redder. 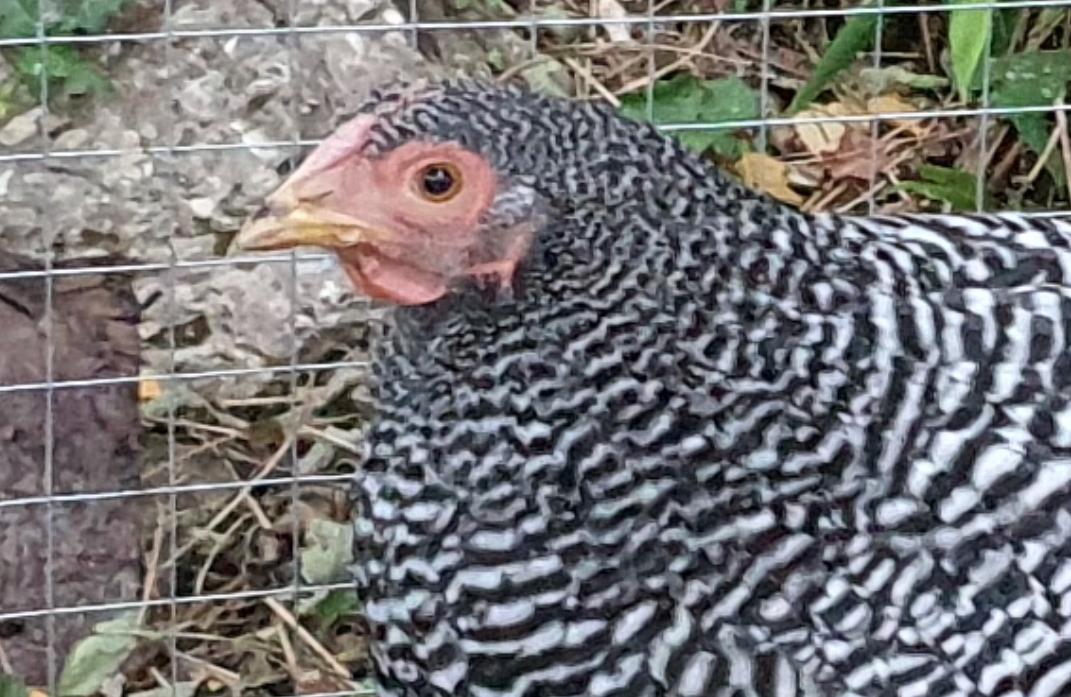 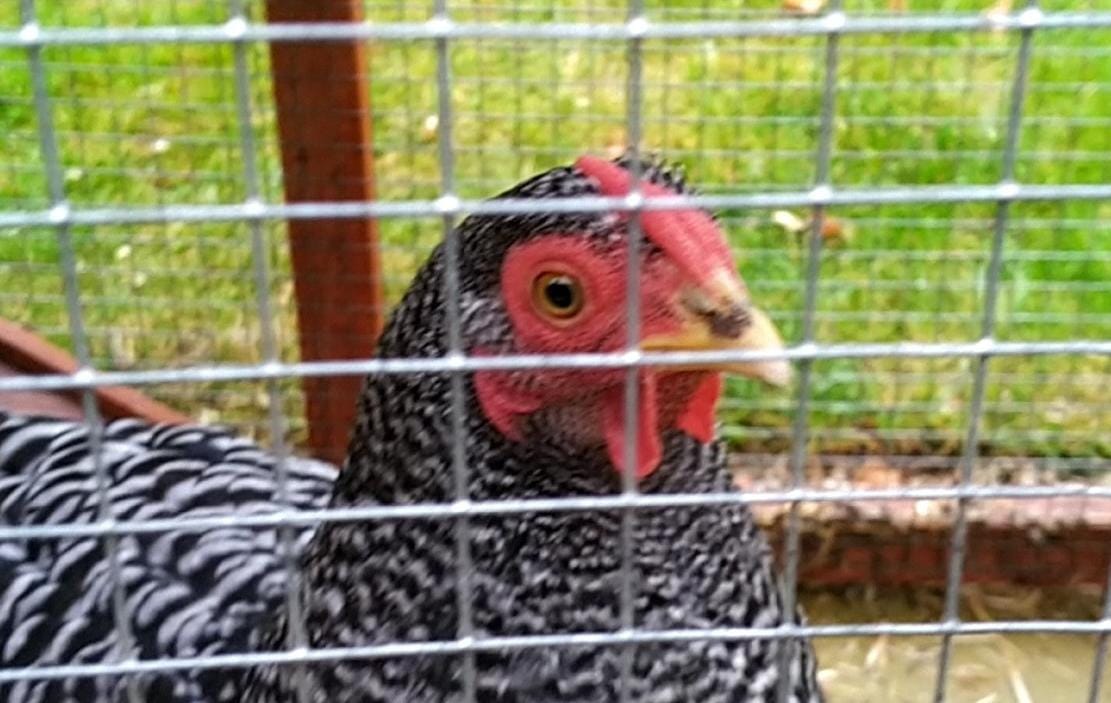 Cute chook! Second photo she looks fine, first though - pale. If you are sure she is not hot, or have any lice or mites - your next guess is worms. Check through her poop and worm her and the rest of your flock just to be safe. My chicken Oreo sometimes goes pale for no reason, I turn around three seconds later and she is red again, happy and healthy always. Just keep a close eye on Bramble (cute name by the way!) for the next few weeks. Come and tell us if something is up again.

A cession of laying coincides with becoming pale and this is the right time of year in the northern hemisphere for that to happen.

Is that your only chicken or have you only four eggs from all of your chickens?

3 1/2 years is very young to quit laying.
Please tell us everything you feed and in what amounts.
Last edited: Dec 7, 2020

Hello both and thank you for the replies.

It's winter here, so starting to get colder. Most days are now 8'C (46'F). I cannot see any traces of worms in her poop but I will check again. Yes, you can really see the difference. Did you also notice her wattles have shrunken too? I only noticed this when I posted the photo earlier.

We only have 5 chickens now, having lost some earlier this year to old age and illness. The illness was reproductive system issues in one and a old age in another 2. We have one hen who is a rescue Sexlink who has laid the entire year. She last molted in October 2019 but is still fully feathered and still laying. She is amazing (and friendly - jumps up on you).

Poor Bramble lives in a separate run on her own because she gets picked on and never runs away or defends herself, and so will just go into a corner and let them peck her until she bleeds. Hence why we built her her own run and coop over a year ago. She goes up to the others and hangs around with them, but they are separated by the coop wire fencing.

So Bramble has only laid 4 eggs in total. The other hens are not laying either (apart from Scarlett the superchicken) and they stopped at various points in the year. They are all about the same age (3-4.5 years old and different breeds). They are all pets, so if they don't lay, that's fine by us.

One hen (in another coop) is doing a lash egg every now and then. She is not laying and has probably done 6 little lash eggs that I have found. There may have been more that she or the others ate if they found them. But they are not near the other coop (we have 3 coops in total). I do not know what is causing the lash eggs, but she seems none the worse for it at all. Very happy, active and has molted and regrown her feathers and looks beautiful.

The feed is the same for all birds: layers pellets, grit, scratch in the evening, vegetables (greens) once or twice a week, rice and potatoes occasionally. They all get lettuce every morning (yes, really) which we chop up into smaller strips - and they get that all year around.

Other than that, just what they find when they are digging around, so some grass, some insects. There are no crop issues though - I check that regularly.

Hope I have given enough detail - and thanks again.

It can be normal to be more pale when not laying eggs. The other hen who has been passing lash egg material is suffering from salpingitis, an inflammation of the oviduct. It is a common reproductive disorder, and there may be lash eggs inside the abdomen. I have done necropsies on several hens who had lash material in the abdomen.

Thanks Eggcessive - I will look up what to do for her. She seems very happy and it's been going on about 6 months or more.

As for Bramble, I am more concerned about her ghostly appearance. She is not normally this pale and she is not getting any redder. I did mention it above, but her wattles have shrunk too.

Some mites will only come out at night in the dark, so I would try and examine her for any mite problem, just in case. Mites will cause anemia.

Thanks. It's just about bed time for chickens here in the UK (4:15pm and it's pretty dark) so I will take a torch and have a look. Thanks again. I will report back.

I couldn't find any sign of mites in her feathers. I looked around the neck, under the wings and the vent/tail area. I pulled the feathers back until I could see the base of them with the skin. Couldn't see anything.

However what I didn't expect was her feet. They do not look good. Could this be the cause? 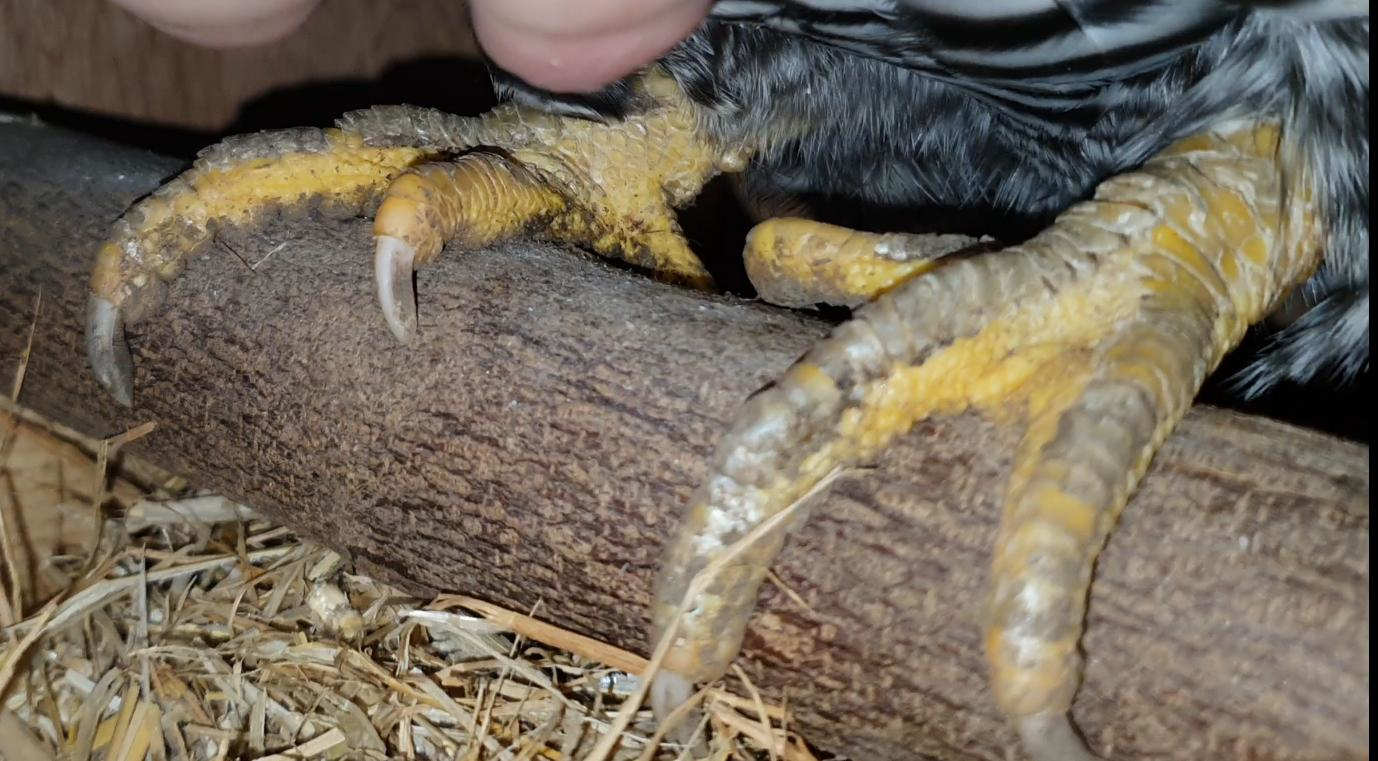 Looks like she has scaly leg mites, which are too small to see. You can treat with ivermectin orally or topically behind the neck. You can also apply an oil or ointment to the legs and rub it in well once or twice a week.

On and off pale face
2