Coronavirus, Covid 19 Discussion and How It Has Affected Your Daily Life Chat Thread

Ruthster55 said:
Don’t worry. I’m on your side.

I’m just really frustrated the way that this has been rolled out.
Click to expand...

I understand. Paperwork is a pain, but it's a new vaccine so they have to be like "are you suuuuuuuuuuuuuuuuuuuuuuure you wanna take it?". 9_9; It's frustrating. But it's definitely focused on elderly and high risk first immediately after healthcare workers. Even my sister with RA can't get it yet. It won't be too many more months before more people get it. I think it's going to essential workers after elderly and then open age groups. If D is still at grocery he'll get it then. G just started his new job at a medical software company so he's no longer eligible.

aart said:
Got a link to that story?
Click to expand...

I do not normally copy links to stories I read on the off chance I may reference it at some later point in time. You are not obligated to believe anything I write. You can accept that I am telling the truth in what I said or not. It matters not to me since I am not trying to convince you one way or the other.

ChocolateMouse said:
I understand. Paperwork is a pain, but it's a new vaccine so they have to be like "are you suuuuuuuuuuuuuuuuuuuuuuure you wanna take it?". 9_9; It's frustrating. But it's definitely focused on elderly and high risk first immediately after healthcare workers. Even my sister with RA can't get it yet. It won't be too many more months before more people get it. I think it's going to essential workers after elderly and then open age groups. If D is still at grocery he'll get it then. G just started his new job at a medical software company so he's no longer eligible.
Click to expand...

Smokers can get it in New Jersey. Before lots of others.

That's dumb, but they are technically at risk. I'd bet it's exclusively about who is at highest risk to end up in the ICU and keeping them out of it I think to immediately lift the burden on ICUs ASAP. It's not really a doctors job to moralize over unhealthy vices... We all have them to varying degrees. I strongly disapprove of smoking but if I were a doctor it's my job to manage their lung health and I don't have a desire to make people feel bad for self-destruction. I'm more sad about it and wish they could get to addiction counselling. Where I live people can't smoke indoors/around entrances in public (not even at bars) so second hand smoke isn't a huge public health issue or I'd have a bigger problem.

Just click through and look at the numerous studies.

Ivermectin has shown 100% effective as a preventative in healthcare workers. HCQ also has impressive results. Why wouldnt we give these 40+ year old, proven safe medicines to our healthcare workers and other vulnerable individuals.

Everyone must do what they think best.

All of these things, often in conjunction with each other, have all shown great promise and real, already here results with no guess work.

Why a vaccine over these options?

So how's everyone been doing? I alive and still "healthy" (knocks on the wood cutting board here in kitchen)... Been productive with coop mixing, wrote an article for some of the stuff I've done. Getting all set to do a vinegar cleanse to our water well motor and pump this week. 48 hrs minimum soak and de-mineralizing... Then a purge.....
Back in March this happened.... Note the bulge and taper to threads on pipe.... 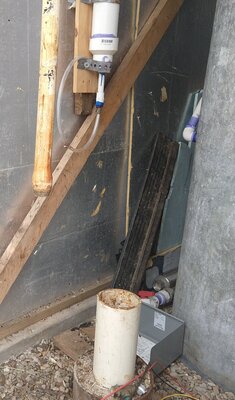 I have been very thankful to my muse... Many, many haiku have spring forth... Several dropped in my thread; most are over in my Twitter database (my version of the cloud for haiku).

bhawk-23 said:
I didn't read through the whole thread but thought I'd comment. If it wasn't for covid and hubs being laid off for 5 weeks we would not have chickens! Lol and I am enjoying the heck out of my chickens!!

We have been very fortunate all considering. Hubs and son traveled all spring, summer and fall for work but we didn't get it until last time out of town for the season. Go figure. Lol
I do have Crohn's disease and it knocked my immune system down enough to give me shingles a couple weeks after. I would not wish that on anyone!! And I'm too young to qualify for the shingles vaccine

anyways, like I said, fortunate all considering so that's all I have to complain about.
Click to expand...

Welcome, glad you are enjoying your chickens. I have started hatching again. Can't wait until next week when I have some due. Shingles. My husband got them a few years back. He was miserable. Got the shots after, because, yes, could come back.

sourland said:
Good luck. I think NJ is out of vaccine.
Click to expand...

Winter, it sounds a bit like you've moved goal posts. You gave an example of why you didn't wanna get the vaccine - because they didn't release animal trial data. I showed you, definitively, that the data had been public for months and was not even buried or especially hard to find. Why didn't you already know that was public if you are researching this critically and that was a concern?

I could give countless reasons why you should get the vaccine. For example, it's no longer experimental because of people like my sister who signed up to try it before you and make sure it worked. The research that's gone into it is incredible and sound. Because the damage viruses can do is overwhelming and long term and can even permanently change your DNA. Because the vaccine is proven not to kill you or even be dangerous but COVID will. Because even with our best treatments there are places rationing care. There are places they're telling ambulances not to bring patients who might live to the hospital. There are places air pollution regulations on crematoriums recently had to be lifted to handle the volume of bodies being burnt - even with our very best treatments. Because people won't wear masks. Because there are people like my other sister for whom herd immunity may be critical. Because it's our very best chance to save countless small businesses. Because the odds of you carrying a transmissable viral load post vaccine is low. Because the research on ivermectin treatment only shows moderate effectiveness in mild cases only. Because even mild cases of COVID cause permanent lung damage no matter what they are treated with. Because the pope called it a moral obligation. Because Dr Fauci received it with full confidence. Because like other viruses even mild cases have long term implications and vaccine immunity is safer. Because you have a family that loves you and you want to be safe for them. Because propaganda is easy to fall for when it feeds on the fear of unknown. Because rich and powerful people are paying lots of money to scramble to try to get it first.

Honestly the list goes on and on. But if you try hard to convince yourself of something or keep shifting your standards you can whattabout anything forever and I can't stop that. If evidence based research won't change your mind and compassion and love for fellow humans won't and the cynicism of rich people trying to get it before you won't, nothing I say will.

But I can ask that you stop discouraging people from our best shot at herd immunity by posting - frankly easily debunkable - claims about one of the most innovative and scrutinized and transparent vaccines on the market. Some people won't be able to live unless enough people get it (or keep wearing masks). Some of those people are people I love. And I'd like to see them keep living.

I'm getting the vaccine. Everyone I know and love will be getting it. And if enough other people do too, maybe we get to go back to full normal again. And that's exciting.

We definitely don't go back without it. I don't even wanna think about our hospitals stacking body bags in trucks anymore. And that's the alternative right now.

We're already using every treatment we have and it's not enough.

electrycmonk said:
Note the bulge and taper to threads on pipe
Click to expand...

Not seeing it, and am curious.
BUT this is for a different thread...a pipe threads thread.

Ideas for improving a problem coop?