I've seen pictures on google, but I can't tell what the difference is!

A Barred Rock has yellow legs, a Cuckoo Marans has white legs. A barred rock has a more distinctive barred pattern on its feathers, the Cuckoo Marans has a more random pattern, thus the Cuckoo name.
If you look closer at the feathers on each of these roosters from feathersite, you will see the patterns are different, barred is tighter are closer, almost brighter, Cuckoo is more scattered and almost lighter. Cuckoo, on any breed, not only the Marans, is just less uniform and organized. 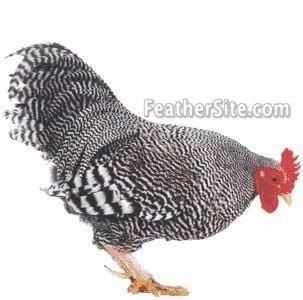 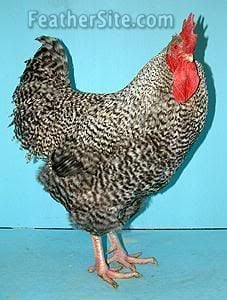 There is a serious difference in the Egg color too, when the hens start laying! Barred Rock girls lay a tinted egg, the Cuckoo Marans lay a Dark egg, they are called the Chocolate egg layers, there are five of my Cuckoo Marans eggs in this mix: 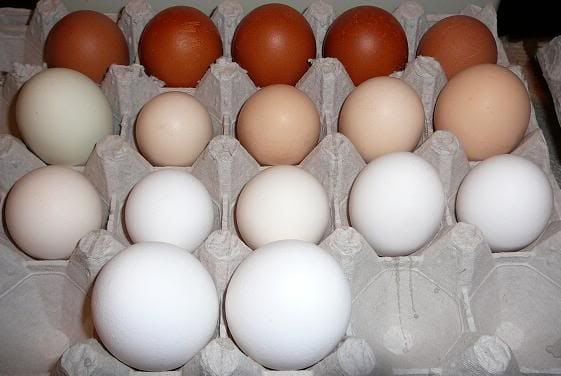 Thanks for the info. I didn't know the different either.

Even though I wasn't the OP, that really helped me tfpets! Thanks!

You're welcome! I learned it all by researching what birds I want to have! It's amazing that there can be so many differences in chickens, I learn something new every day here, too!
Tina/tfpets

I think the feet are going to be the only way I tell the difference!

Hatcheries will sell Cuckoo Marans with Yellow legs, just remember, they arent! They are Mixes and not "True" Cuckoo Marans....they will look Cuckoo patterned, but have yellow legs....confused yet?
Tina/tfpets

Well, you wont find many BRs from a hatchery that look like that first picture, I can promise you! Most look very cuckoo barred, even if they are BRs. Barring is a hard trait to perfect. Mine that are several generations removed from the hatchery are getting much nicer barring. My BR, Ivy, from Ideal, looks like a very badly barred Cuckoo Marans except for her legs

I just found out recently that the hen I thought was a BR was really a Cookoo Marans when she started laying eggs. Great suprise, the folks at the feed store had no idea what they were sellling.

I love that kind of surprise too!

Working towards making a cuckoo silkie!