Do Barnevelders and Orpingtons get along?

I was planning on getting just Orpingtons, but recently discovered Barnevelders and now I really want some of those, too! So pretty, and such nice temperament. They both seem like very mellow, friendly, easy-going breeds, which is exactly what I want. Both are prone to being bullied, but I'm thinking since both breeds are so docile and non-confrontational, they should be able to get along together... I'm new to chicken breeds though so I don't really know. I don't want to create any problems if I don't have to. So what do you experienced chickeners think? Would this be a good combination for a peaceful flock?

Raised together there is no reason they should not provide a diverse and productive flock.

sourland said:
Raised together there is no reason they should not provide a diverse and productive flock.
Click to expand...

Good to hear, thanks! Yes, if I can get eggs at the same time next spring, the plan is to hatch and raise them together.

I definitely think those breeds can co-exist but I think how they are raised and introduced is at least as important. Ideally you get them all as same age chicks and let them grow up together. If not, you get the smaller group first and add the other group as soon a possible carefully to be sure olders don't pick on youngers. Try not to introduce a lone chicken or two to a well established larger group- unless he is the only roo and close to grown. Or get your first breed and if they are the broody kind (I think orpingtons might be?), let them hatch eggs of the other breed or put farm store chicks under them. Broodies do very well at integrating their chicks into the flock and a good broody will mother anything- even a duck. If you must get two different adult groups, have a plan for see and don't touch until they get used to one another. Maybe the pen divided in half for a while. Lots of space both in the coop and exercise yard (as well as hiding places) cuts down on picking on each other.

Mine are fine together.

oldhenlikesdogs said:
Mine are fine together.

Oooh, you have both? Cool! Are both breeds as friendly as advertised?

K0k0shka said:
Oooh, you have both? Cool! Are both breeds as friendly as advertised?
Click to expand...

I like them both. They are more docile and not as prone to cackling their heads off like other breeds do. I personally think there's nothing prettier than a barnevelder. It's a subtle beauty that needs to be seen in person to appreciate. Buff Orpingtons are all around good birds that will keep up the egg production throughout the season, but won't overwhelm you with eggs. Barnevelder don't lay a lot, but when they do it's a dark brown egg. They are pretty. Some of my best birds have been barnevelder or buff Orpington.

@oldhenlikesdogs thank you for the reply! Mine will be mostly pets, eggs will be a bonus. So friendliness is a must. They do look gorgeous even in pictures! I found a breeder who has strikingly colored orpingtons, too - jubilee, spangled, mottled etc. So this is gonna be one colorful flock!

Though natural enemies in the wild they do well when raised as pups.

-Gary Larson, Far Side sketch of squid and dog.

In case anybody finds this thread and is wondering the same thing, I just wanted to post an update (and wow, it's been more than a year!)

One interesting thing I noticed is that each breed/color seem to be able to tell their own kind from the rest, even though I have 3 different varieties of Orpington. All the chickens get along well, but I noticed that the Barnevelders tend to hang out with each other more than with the Orps, and they like to sleep next to each other. The Orps stick together, too, and even group themselves by color. I'm used to seeing mixed flocks looking "mixed", or maybe I just wasn't paying attention before, but these chickens definitely seem to prefer the company of those who look like themselves.

Both breeds are very calm and docile, but the Orpingtons are WAY friendlier with people than the Barnevelders, even though all were hatched and hand-raised by the whole family, very socialized and very spoiled. The Barnevelders definitely don't like being touched and will avoid being caught, though if I really wanted to, I could still catch them easily (they don't like it, but won't run for their lives or put up an actual fight). They do, however, enjoy our company on their own terms. They'll come over and sit next to me, or preen themselves right next to me, or even perch in my lap or on my back, just as long as they do it on their own, without being picked up. The Orpingtons, on the other hand, are total puppies and even let my young children (clumsily) pick them up and carry them around. They like to be near me, next to me and on me, and I just can't get enough of them! I got three colors (Lemon Cuckoo, Silver Laced, and Red Partridge) and they are all like that. They are my favorite breed!

If anybody out there wants to get Orpingtons and Barnevelders together, go right ahead! They make great flock-mates.

Here are four of the girls: 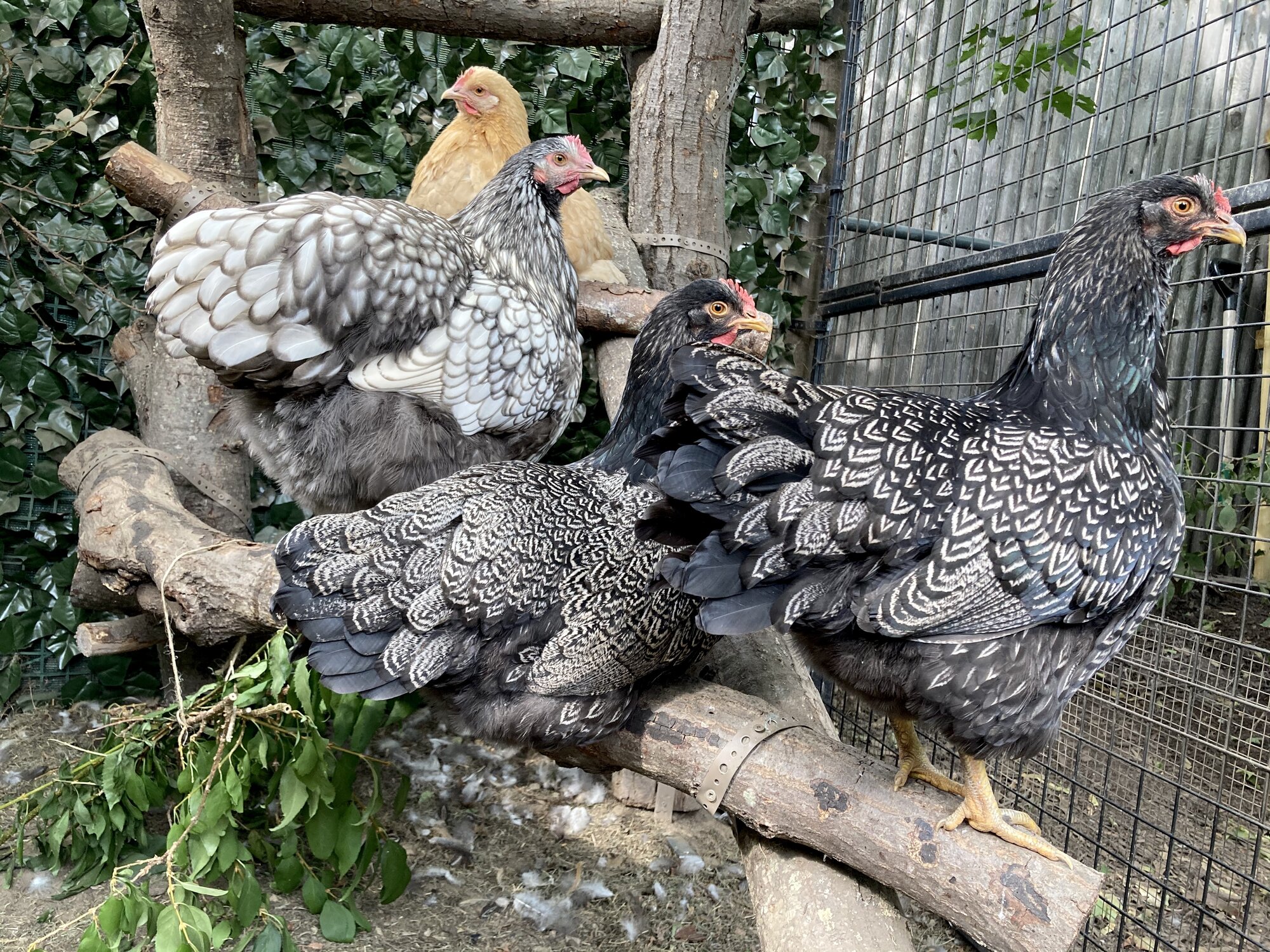 What to do with the Blues (barnevelder, marans, wyandotte)

Were all orpingtons created equal? :)

E
Picking Local breeds after deaths from the hatchery

Would a Barnevelder be a good addition to my flock?