I love that his beard is white. He is so distinctive! 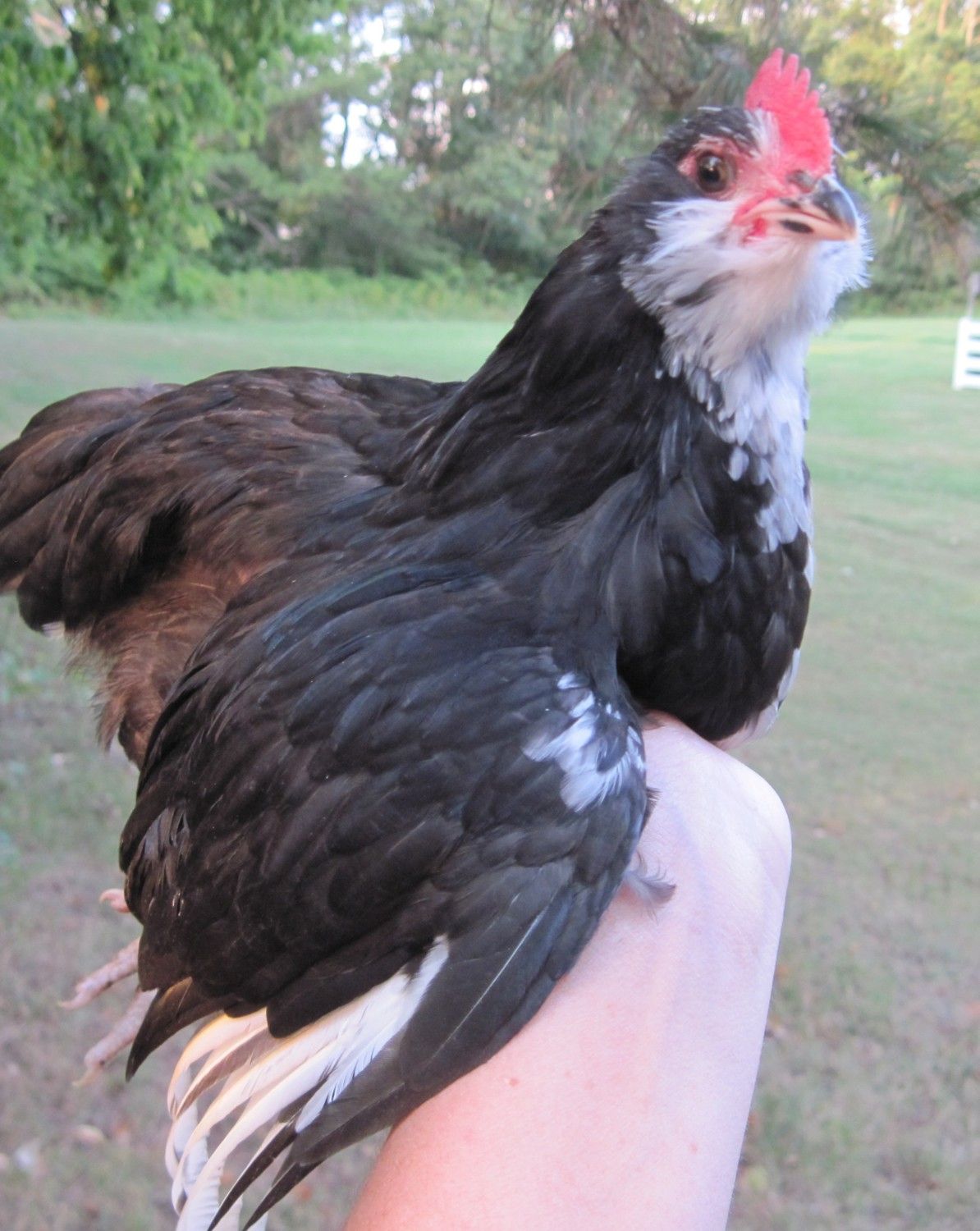 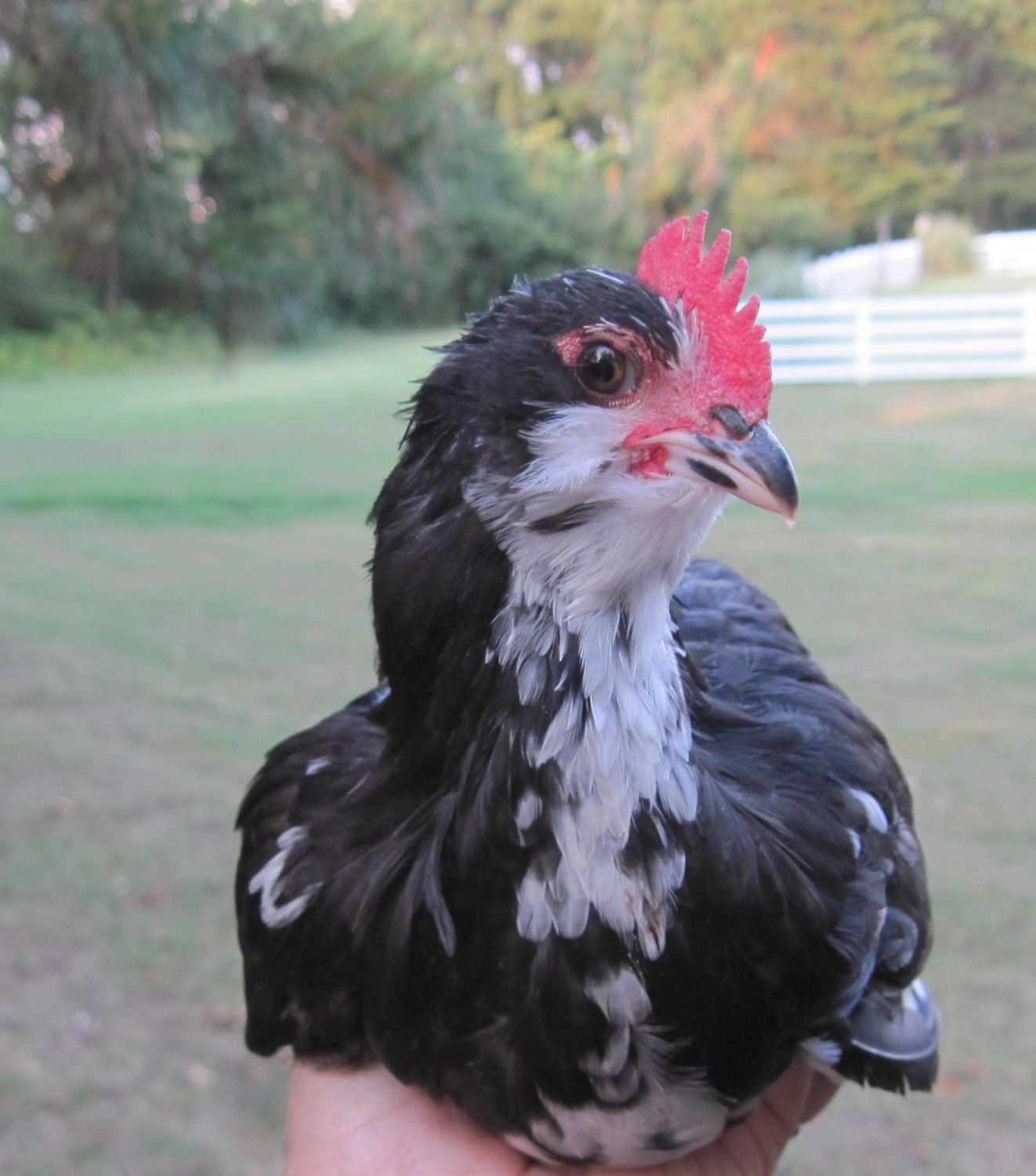 I love that his beard is white. He is so distinctive!
Click to expand...

Wow he sure is handsome! I love that white beard!

NewHopePoultry said:
Im pretty sure they are full siblings.
I guess I have to wait and find out when I breed them

They have just been on chick starter, so dont kow about the corn thing, but thats interesting.
Click to expand...

I'll get a better picture soon is he self blue with leakage? or poor Porcelain?
Click to expand...

its really hard to tell with that pic :-(

I got this girl in april, not sure on age but she was fully feathered. Still isnt at the age of laying either. What do you think? Show quality or not? Please give your reasons also, so I can learn. Shes not super calm so she wasnt standing still very much with me in the cage.
Thanks Lisa Where'd you get her?

mstricer said:
Where'd you get her?
Click to expand...

My dad and his wife rescued her from a family that bought her and 4 others as easter chicks. The kids squeezed one to death and we got her and 2 oegb not sure what happend to the other chick. They had been feeding then nothing but oats. My dad doesnt care for fancy chickens or bantams so we took them. I have no idea where the family got them from. But this pullet has nicer feet feathers and a nicer beard than my mille from someone who was breeding them for 4-H.


COMB: Single - proportionately smaller than that of the male, set firmly and evenly on Head, moderately and evenly serrated, having five regular
and distinct points, slightly Arched, front not to extend beyond point half way between nostrils and point of beak, Extending back over
head.
BEAK : Short, nicely curved.
FACE: Fine quality, free from wrinkles or folds, partially hidden with long muff.
BROW: Heavily furnished with feathers.
EYES: Bold, round, conspicuous.
WATTLES: Rudimentary only, but preferably none.
EAR LOBES: Very small, inconspicuous, no wrinkles or folds, hidden by muff.
BEARD & MUFFS: Composed of feathers turned horizontally backwards from both sides of beak, from the center, vertically downwards, the whole forming
a collar of three Ovals in a triangular group, giving a muffed effect.
HEAD: Small, but appearing rather broad due to heavy feathering, carried well back, above a parallel line which when drawn from tip of tail
with bisect muffs.
NECK: Medium length convexly arched.
HACKLE: Heavily feathered, covering shoulders and upper back, not meeting in front of neck.
BACK: Moderately broad, short, slanting from shoulders to base of tail with the whole producing an up-shaped curve with neck and tail.
CUSHION: Abundant, feathers broad.
TAIL: Main tail - feathers medium width, top feathers slightly curved in a convex manner, widely spread at all times, carried at an angle
of 60° above the horizontal Coverts - Abundant, widening as they flow to about two thirds the ways up the tail.
WINGS: Medium length, fitting neatly to the body, sloping downward at the same angle as the vulture hocks, in-curved toward the abdomen.
Shoulders & Fronts – Nearly Covered with hackle feathers. Bows - well rounded. Coverts - well defined with two rows of
broad feathers. Primaries - medium width, strong quills, completely hidden by Secondaries. Secondaries - wide, forming a
neatly and evenly overlapping appearance when wing is folded.
BREAST: Very broad, deep, upper part well developed and carried well forward. BODY & STERN: Body - deep, short, and stubby.
Stern - fluff, short.
LEGS, TOES & Thighs well developed, medium length, feathers starting from lower inside part of thighs, forming a cluster of long stiff feathers close
together known as vulture hocks, inclined toward the ground, following o0utline of wings. Shanks - medium length, the front
and outside covered with feathers which are short at top and gradually increasing in length toward the bottom, stiff and turning
horizontally outward, their ends curving backward. Toes - four, straight, well and evenly spread; plumage, outside toe and
outside of middle toe covered in same manner as shanks stately.

Moonchild said:
Teddiliza---Look one went Broody!! Excited about this new part of the d'Uccles!!! Again Thanks for sharing the babies that are now momma's soon to be momma's I hope!
LuLu the sweet hen Turned Broody Hen YAY! SHE WILL HATCH BABIES FOR YOU NOW!
Click to expand...

What can we do with our flock? Brainstorm!
2