I believe this to be a 'patience' type of thing, but if I'm wrong then best to confirm ....

We received our 10 x ex battery hens around 6-7 weeks ago - anyone that has had ex-batts know that they take some time settling in before showing true chicken behaviours. We have found they take a little time to learn 'chicken' things like going to bed at night - it took them 4 weeks before they started going into the coop when it got dark, before that I had to go out and put them to bed.

The thing is that most of them are ignoring the roosts and want to sleep together in the egg boxes. At best there are 3 of them that use the roosts, but the rest try and pile into a single egg box (there is usually 5 chickens in a 14" x 16" egg box and then 2 in the same size egg box next door). In total there are 4 egg boxes - 2 seem to be used for sleeping in and 2 for laying eggs in.

The roosts are approx 18" above the ground and above the egg boxes and I have added a ladder in just in case. They are 4x2 flat side up and I've rounded off the edges ...

We have been out most days trying to encourage them up to the roosts by placing them up there, but they almost always hop off straight away and to be honest I don't mind where they sleep if they are happy (at worst it's more cleaning for me), but I don't want them to do it if it will harm them?

I have grown up with chickens as my parents used to hatch them, but this is the first time I have had ex-batts and I'm not sure if there is something I should be doing to encourage their 'chickeny' ways or just accept they aren't like other chooks.

1. Just be patient and they will get used to it.
2. Block off the egg boxes. Some of them are using them for laying eggs, but others are just laying wherever ....
3. Take out the dividers between the egg boxes so that they can sleep together.
4. Do something else?

pic's always help ... (the white bits on the ladder rungs is paint and not poop!) 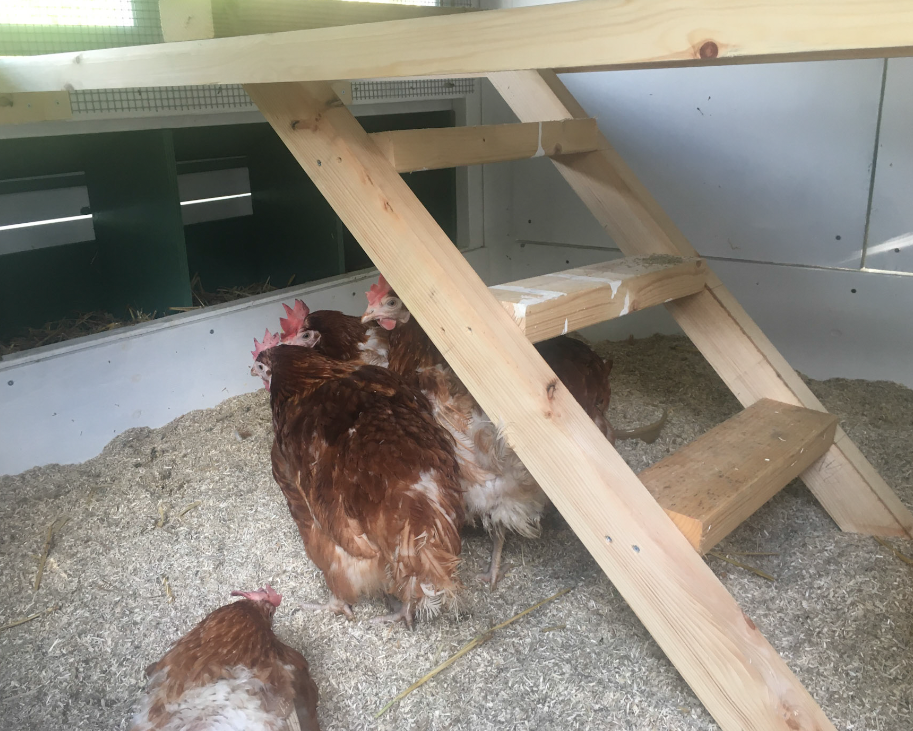 Thank you for reading this far

Aw, bless their little hearts! It's a little over month that they haven't been part of the "machine". I would just give it more time! Thank you for taking them!

As you can imagine they've probably never seen or used a roost in their life, so don't know what to do with it. If you really don't care about soiled nests and soiled eggs, yes you can just let them sleep and lay anywhere they want.

I personally would block off the nests at night (because I want clean nests and eggs) and manually put them on the roost until it clicked in their heads that that's what they should do, but it could take weeks for that to happen.

Thank you. I will give them some more time.

They prefer the egg box to the right for sleeping in, I usually get a couple of eggs in the left hand egg box.

A backwoods coop in NH

I agree, they will just need some time to figure things out, and like you said it could just take a bit for things to “click”. It’s awesome you were able to take them in and give them a chance at a regular life, I would love some ex batteries but our current situation doesn’t permit it. Good luck with your new ladies!!

How much space do they have to get on and off the roost?

Think they are still learning to chook

woodworm said:
The coop is 8 x 6 with 16ft of roost space. The ladder in the pic is approx 2 foot wide.

Think they are still learning to chook

Thanks. It was hard to gauge in the picture.

It sounds like they have enough landing space for exiting the roosts.

Chickens not roosting during molt