First Predator Attack - Not an Emergency

Hello,
Sorry I’ve been absent lately. Truth is, I’ve been focusing on wellness for my flock instead of illness and injury. With the health issues they’ve been having, I figured I better make a drastic change. But this post isn’t about that.

Today I was working on enhancing the run while the girls were out free ranging. Dog was out, too, but wasn’t with the flock; she was waiting for me to throw a ball. Thing is, she’s been playing this control game lately where she won’t bring the ball to me, so I was somewhat ignoring her. Usually I repeatedly throw the ball in the direction of the flock so any predators see the dog. So that was my stupid mistake. Also, CalFire cleared our road this week. It looks awesome, but it’s ironic that my neighbor and I had been chatting about how visible the yard would be now to predators (they have lots of outdoor cats, so predators are a mutual concern.)

There were LOTS of Minnie feathers strewn about. Her tail and wing had feathers torn out and broken feathers and she was limping. It took quite awhile, as I had to let them calm down, but eventually got them back in the run. All except Ruby, who was missing entirely. Ruby is the same breed as Minnie, but I was pretty sure the feathers were from a Minnie, who had clearly been attacked. With no evidence of Ruby being taken, I remained cautiously hopeful that she could be hiding somewhere. I search all over calling for her, and finally accepted (except for that glimmer of hope that would not give up) that Ruby has probably been taken. I hoped it was quick and that she did not suffer.

I looked Minnie over best I could until she started open mouth breathing from stress or pain, I couldn’t tell, and brought her back outside.

As I was sitting in the run observing the flock, my neighbor came over and cheerfully said “I found Ruby!” She was behind his porch under a rosemary bush. I got her out and carried her home. She vocalized her happiness to be back in safety and with the flock.

Minnie sat most of the day, but ate a little damp feed. I had seen her poop shortly after the incident and had checked that her vent was intact. Her breathing seemed fine. She would take a couple limping steps and then sit. Since she did not seem critical, I thought I’d just let her rest with the flock. It was a beautiful day. Eventually Minnie perked up and started drinking the electrolyte solution I made her and eating heartily. She limped around and self-limited activity, based on pain level, I assume. At one point I went to che kc and she had managed to get up on a 3-foot outdoor roost!

The flock was a little off today. I’m sure they were stressed out, but everyone went to roost as normal, including Minnie.

I’ll provide electrolyte water tomorrow and damp feed for the flock. I’ll also try to look Minnie over better for punctures or gashes. I concentrated my first exam on the areas where her feathers were damaged and on the sore leg/hip. It’s possible she just strained it getting away. What a fighter! Here’s my little trooper on the outdoor roost: 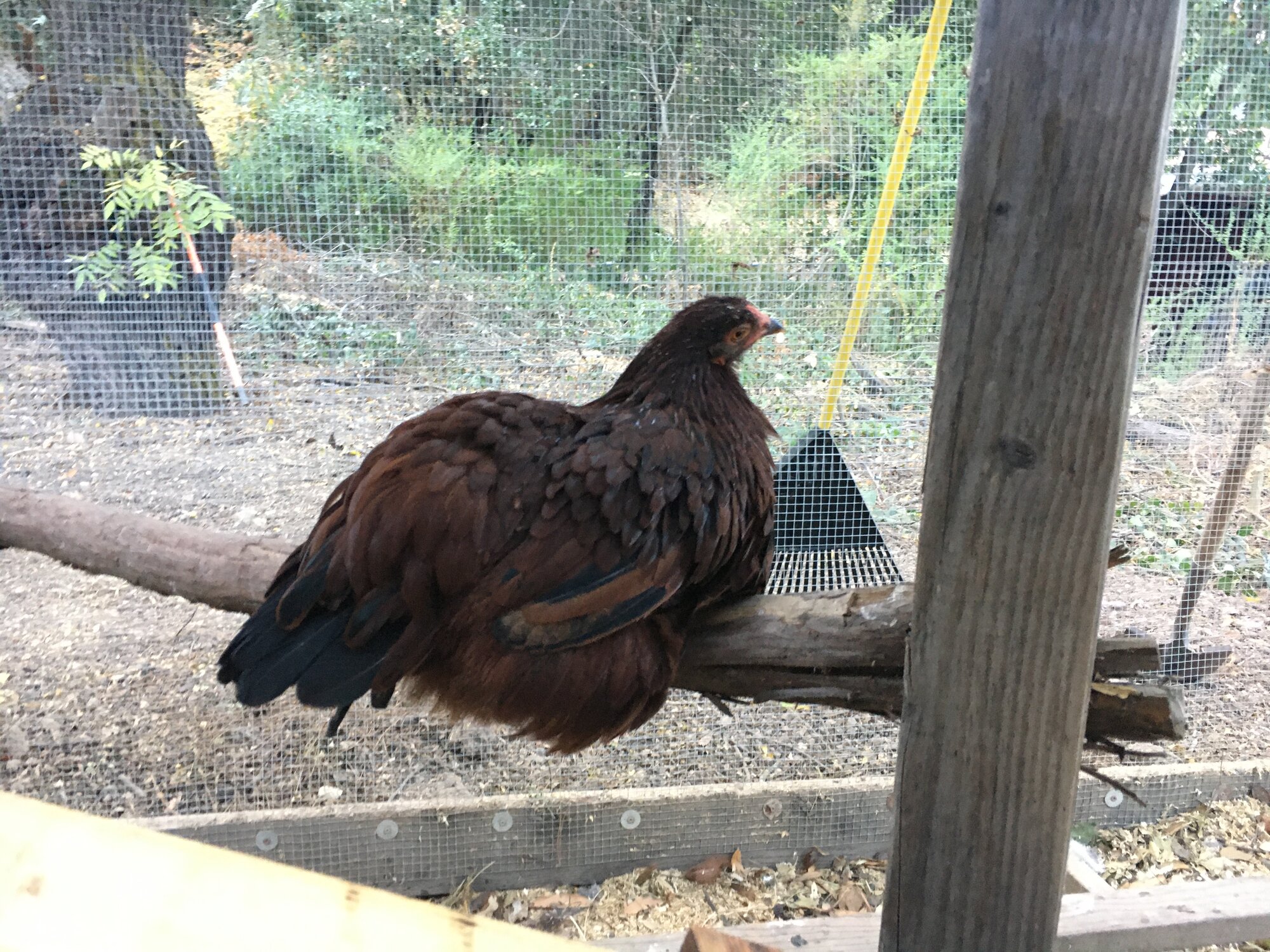 Since the predator will undoubtedly be back, the flock will be on lock down for a bit.

Any idea on what predator it was???

I’m guessing coyote or bobcat. We have seen both. My son saw a fox late one night, too, but wouldn’t a fox be super quick carrying her off? We have hawks, but she was under a tree, and I think a hawk would have done more damage. A mountain lion was spotted nearby the morning before, but I doubt it would be there at that time of day (though possible) and I don’t think the pullet could have escaped. So I guess my answer is that it could have been anything. We have them all (except bears.)

Has there been any signs that predator is trying to return???

Once they know where the groceries are located,,,, they like to visit back.

Since you're giving Minnie damp feed to eat, crush a few tablets of vitamin B complex and sprinkle it on top of her food to eat. Do this for about a week to 10 days. It might help speed up recovery with her leg problem, otherwise expect slow healing. The less she runs around, forcing her to walk etc...the better. It takes time for leg injuries to heal.

Fox. Pretty sure it was a fox. My neighbor saw a pair of them in the yard last night. I think the sight of my neighbor, who was nearby, but initially hidden by a tree, scared it/them off. I am currently planted in between the fox’s likely entry point and the flock. The dog, who is a border collie and is **supposed*** to be the smartest breed of dog, is too STUPID to help me out. She WILL.NOT.BRING.THE.BALL. She will literally stay in one spot staring at me for an hour instead of bringing the ball. It’s a battle of wits and terribly frustrating, because I need to be able to place her where I want by throwing the ball there.
You must log in or register to reply here.
Share:
Reddit Pinterest Tumblr WhatsApp Email Link