I have two other threads running: one on construction of my coop "Authentic Woods 10' by 16' coop"...; the other started to get answers about "...signs of stress/not using roosts...".

We (me, visiting sister & BIL) have an incubation under way and I mixed some posts in with the 2nd thread, thought it more appropriate to start a new one to document the on-going incubation.

I ordered seven ISA Brown "19 week old, ready to lay" pullets on August 8th they arrived September 13th and transitioned into their new coop September 20th around 6pm. We had two eggs (one broken) on Monday the 23rd and now have 23 intact eggs from at least four layers so are quite pleased with their progress and current status.

My sister brought with her 17 fertilized (we believe) eggs from a mixed flock of 80+ laying hens located on Vancouver Island in British Columbia; three active roosters. The owner has been keeping her large flock for seven years and sells fresh organic eggs as well as meat birds (grow outs of 10-12 weeks.) that she started growing this past summer, currently using three tractors each with ~36 birds.

I had to scramble to get a brooder together, finished this morning and moved the Day 18 chick in as he/she seemed to be getting "rowdy" with the other newly hatched chicks and remaining eggs. We are hoping to move another chick today (the 3am hatch) as soon as it is dry and fluffy.

My sister and her friend/flock owner spent two months prior to arrival here selecting hens based on: temperament, laying consistency, colour of eggs (I wanted an array) and mothering instincts. The 17 eggs were picked in the 48 hours prior to sister's arrival here and went into the incubator following arrival. Sister was diligent in labeling eggs and recording details in a log so that we would know which egg came from which mother (accurate in most cases, in a few to one of two hens). She is also recording colouring details of the new arrivals in hopes that we can track them back to the mothers.

The flock owner knows her birds and provided species info on each mother. So far the four are predominately black or black/grey, three with white markings. According to records and bits of late night memories (therefore possibly faulty) we have:
("Mario" a gorgeous and well tempered black is one of the three roosters and does not appear to go into flock owner's coop or fenced run but the girls come rushing to him in his private area. Run is open and the flock free ranges at will, the other two roosters stick to the coop/runs. As we have progressed with the incubation we have begun to wonder about influence of a rooster on chick colouring?)

More results and details to follow as best we are able. 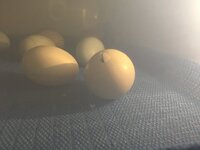 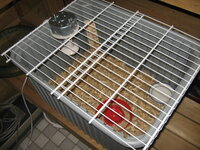 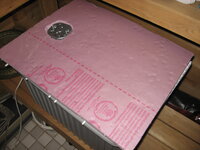 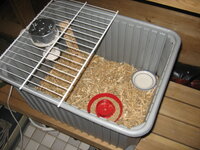 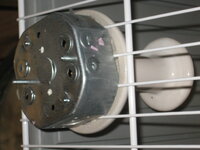 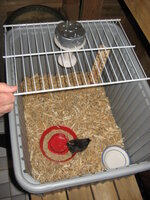 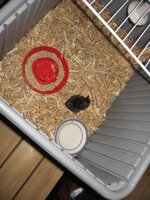 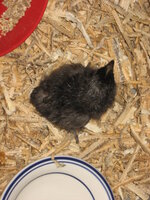 We had five more successful hatches today, another seems to have stopped after 3-4 hours of struggle. Pics of four below are a bit opaque as they were taken through the incubator walls.

We are on day 23, seven successful hatches and one mid-pip stop (out of 17 eggs) so far. This morning we have one more pipping, holding our breath...

Covering the brooder with the foam insulation not a good idea.
It will get to warm in there and blocks all ventilation.

Here's my notes on chick heat, hope something in there might help:

They need to be pretty warm(~85-90F on the brooder floor right under the lamp and 10-20 degrees cooler at the other end of brooder) for the first day or two, especially if they have been shipped, until they get to eating, drinking and moving around well. But after that it's best to keep them as cool as possible for optimal feather growth and quicker acclimation to outside temps. A lot of chick illnesses are attributed to too warm of a brooder. I do think it's a good idea to use a thermometer on the floor of the brooder to check the temps, especially when new at brooding, later I still use it but more out of curiosity than need.

The best indicator of heat levels is to watch their behavior:
If they are huddled/piled up right under the lamp and cheeping very loudly, they are too cold.
If they are spread out on the absolute edges of the brooder as far from the lamp as possible, panting and/or cheeping very loudly, they are too hot.
If they sleep around the edge of the lamp calmly just next to each other and spend time running all around the brooder they are juuuust right!

The lamp is best at one end of the brooder with food/water at the other cooler end of the brooder, so they can get away from the heat or be under it as needed. Wattage of 'heat' bulb depends on size of brooder and ambient temperature of room brooder is in. Regular incandescent bulbs can be used, you might not need a 'heat bulb'. If you do use a heat bulb make sure it's specifically for poultry, some heat bulbs for food have teflon coatings that can kill birds. You can get red colored incandescent bulbs at a reptile supply source. A dimmer extension cord is an excellent way to adjust the output of the bulb to change the heat without changing the height of the lamp.

Today and the next few days are beautiful, highs of 15-17C, sunny, no wind.

We lifted the temporary cage we used for the ready to lay pullets received 4 weeks onto the front deck and moved the chicks into it for a few hours of sun. Food, water and shelter in the front of the plastic box that they have been living in. Will move them back inside in a couple of hours and repeat in the next few days assuming no hiccups. 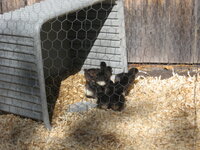 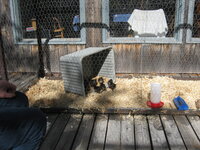 Older eggs lagging behind in development

O
Where did this black duckling come from ?!

What to do after a baby chick hatches in the flock....