So my chicks are still in my basement, i water proofed sealed everything but my vent near my house is blowing steam into chicken coop vent, opened the coop this morning and the pine shavings in there were all frozen on the bottoms and damp, i plan to put my chicks out there in the next two-3 weeks (they’ll be 12-13 weeks old) do you think this will work ? I placed a tarp over everything and secured it down. 1st picture is before 2nd is after, i still have to put hardware cloth all around, but want to see if this will help keep it dry.

also sorry for the dirty windows, still have to replace windows since we just moved in, the vent is blowing high so just hitting the tarp now hopefully this works

You definitely don't want steam in your coop. Moisture leads to frostbite. Can you divert that airflow or move the coop vent?

unfortunately can’t move the coop i actually had the fence extended specifically for the coop and run, i can divert the pipe but it seems now with the tarp over the front (where the two red pieces of paracord are) it is not entering the coop, I’m just happy i realized now or probably would’ve lost all my chicks

Fdny11Bravo said:
but my vent near my house is blowing steam into chicken coop vent,
Click to expand...

Fdny11Bravo said:
Again sorry for the mess haha just had the yard cleaned out and fence extended so it’s a bit of a disaster that’s the furnace vent in the Orange circle
Click to expand...

I would not change that vent at all, it could affect the furnace or the air in your house.
What's the PVC vent to the left?
Both are far enough from the coop that it shouldn't be any problem.

The pvc is not being used, i watched the steam go into the coop since it was blowing high it seems as though it’s hitting the tarp now, so that’s what i figured was causing the water and frozen shavings

I'm confused. Why do you need a tarp over the coop? Does that roof leak?

The very simple solution for the house vent issue is to put a little section of fence ... or a garden table with a solid front between where the air blows and the front of the coop. Because it's fairly low, it wouldn't have to be that tall, just enough to block the air flow. A garden table would serve a double purpose- somewhere to set eggs and food cans etc ... that also blocks the air vent.

I understand why you'd want to cover the run, naturally. But .... first issue with using the tarp you've got --- you've created an area with no light.

The part of the run that's up against the fence doesn't need to be covered. The fence on that side is already doing the job of blocking the wind. My two pink marks show about where I would start and end the tarp that would go over the top. The light blue line is the anchor to the ground- and I would do EVERY grommet. (and secure every grommet on the fence side with electric zip ties to the run)

The run already has a roof- I get wanting to have another layer given your weather. So I would attach a much smaller tarp at the first pink mark by the fence side, and pull the tarp out at a 45 degree angle into the backyard side, but have it come no more than 1/3 to 1/2 down the side of the run for ventilation and light.

This will take the water that comes off the edge of the tarp and pull it away from the run. However, THAT water will need a place to go.

I can't tell what the slope of your yard is but I would do a trench 3-4" minimum deep depending on your soil that would get filled with 1 1/2" gravel. The red line represents the water coming off the angled, pulled out tarp edge. The yellow ground lines are the trench. The dark blue would be the 1 1/2" gravel in the trench (which way the water flows is up to the slope ... if there is no slope... dig one end of the trench deeper, like a ramp, and have it come out where plants can soak it up, taking care it's not where people walk regularly.

Go out in the heavy rain and watch where water collects as a first step.

The green area, I would put 3/4" gravel for drainage, traction and to keep your shoes cleaner going in and out of the house.

Without attention to drainage, you're going to end up with mud around the edge of the tarp- and it will make the ground inside the run very wet, and so, so hard to dry. (signed, person who made the same mistake)

In addition to drainage, if you can put down a gravel base in your run, then put sand on top, that will build it up some - and make it much easier to clean. 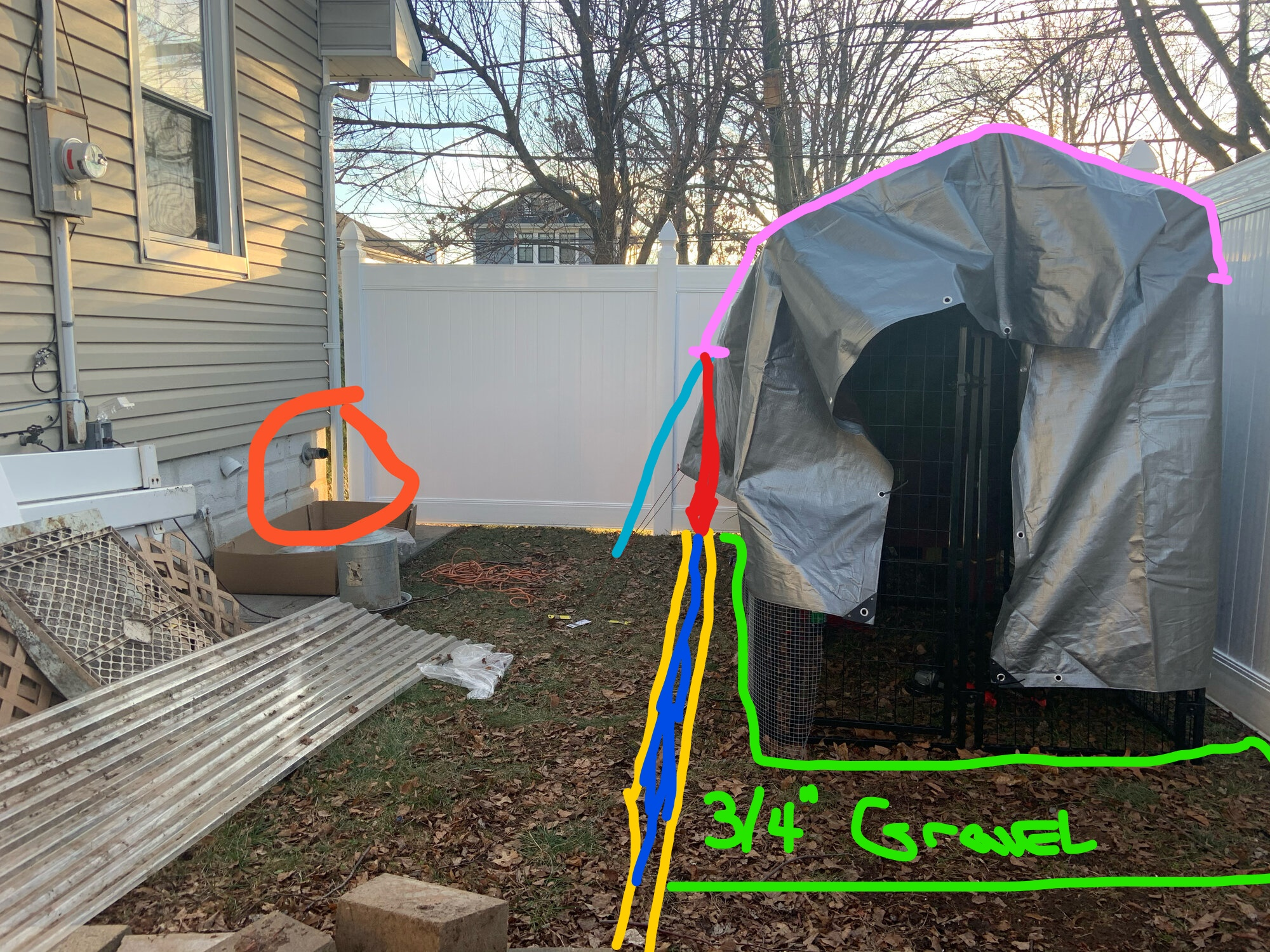 I am a bit shocked a furnace vent wouldn't be routed out your roof or vented to be at least 6" above roof peek for safety.
Furnace exhaust getting in the house (human or animal house) is a potential fatal disaster. It is why furnaces are supposed to be periodically inspected. (yearly is recommended)