Getting Ready for Winter - picture heavy

Fortunately here in middle Tn our winters are short and mild. We get stretches of low teens and a few snow falls. Last winter was the coldest I recall in the last 10 years or so. We made this coop and run from a 8' x 13' dog run and have enclosed it with 11 oz. brown tarp and I made some translucent panels to let the sun in through the front. The front awning rolls up but I can drop it or pole it out for some shade if they need it. I'll roll it down to close the gap in the front as it gets cooler out.

I still need to get the opener for the coop door and get it wired. Its funny they lay there eggs in the whiskey barrel every 3rd egg other wise its in the nesting box. Go figure. My Momma Cat likes to go in and sleep in the barrel on warm days and no one seems to mind. She really gets along well with the chickens.

The tarp material is very heavy. I used a grommet set to add grommets as needed so I think they should be snug as a bug in a rug. I think the cost total for the tarps came to about $60.00 and I made the front ones from some plastic a friend gave and used my wifes sewing machine to sew on a boarder to hold the grommets. The run we found on Craigs list for $100. but saw others for a little as $20.00 (dollar short and an hour late!) I cut some bamboo to wire through grommet holes to pull the tarp tight to the chain link and it holds very nicely. I put a strip inside and out opposite each other and used tying wire and twisted the to strip tight. Ive been inside when the wind was blowing pretty hard and it was very comfortable.

The entire plan was to make it so we can carry it to another part of the yard if needed. It would mean another footer elsewhere but it could go over by the garden if we decided to move it. Ill decide this winter how it does in a heavily shaded area as it is in now. A great location in the summer but winter wont get the sun, maybe more than i realize after the leaves fall.

The run is attached to 2 x 6's set in the ground and the inside is creek gravel. I dont think anything can get in bigger than a chipmonk. the bottom 24" is lined with chicken netting. I'll run some power out their tomorrow and get a light hung. I need to decide how I will add some heat to the coop if they need it. Im thinking they probably wont from what others have told me. I have to decide. Any ideas will be greatly appreciated. 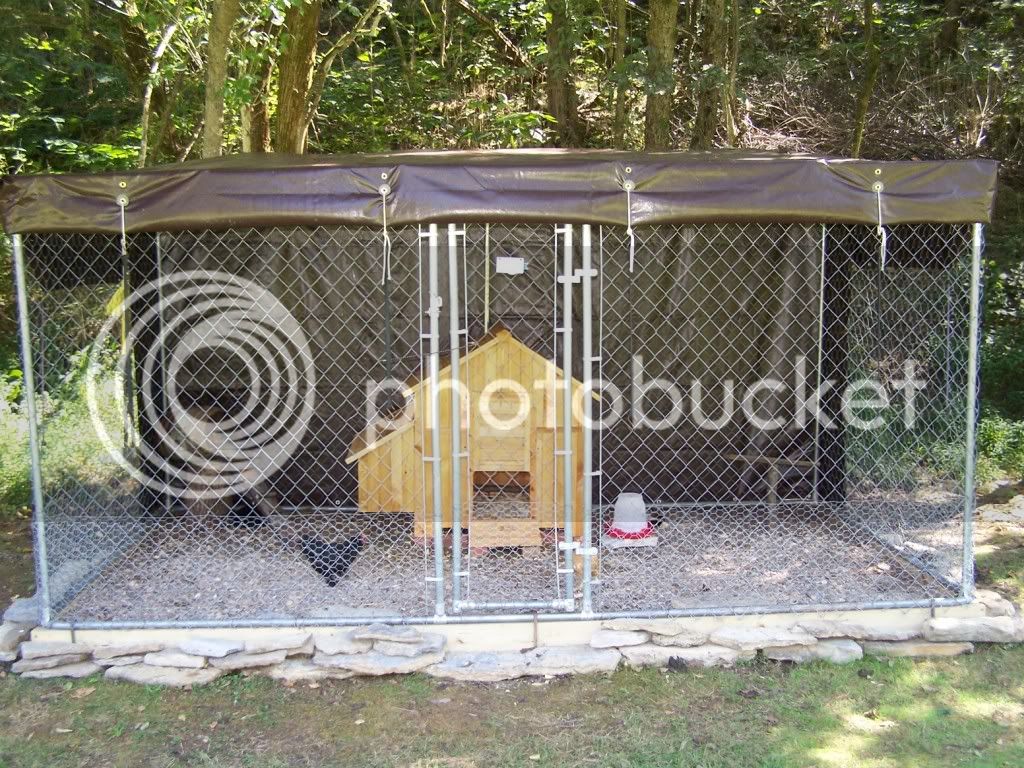 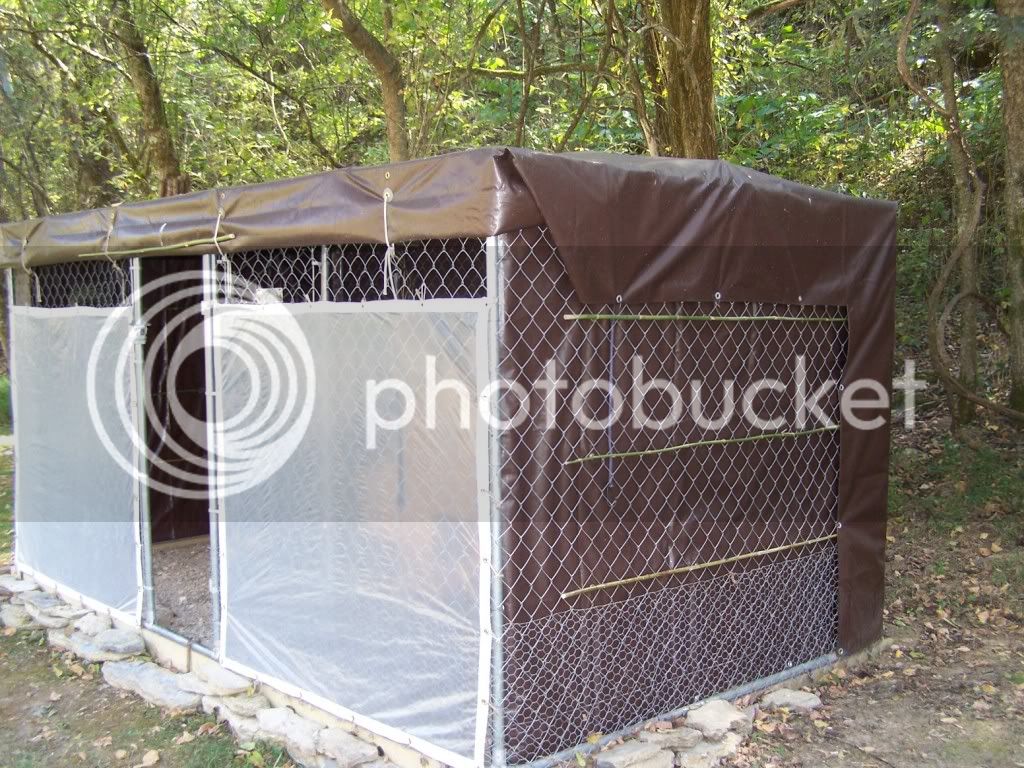 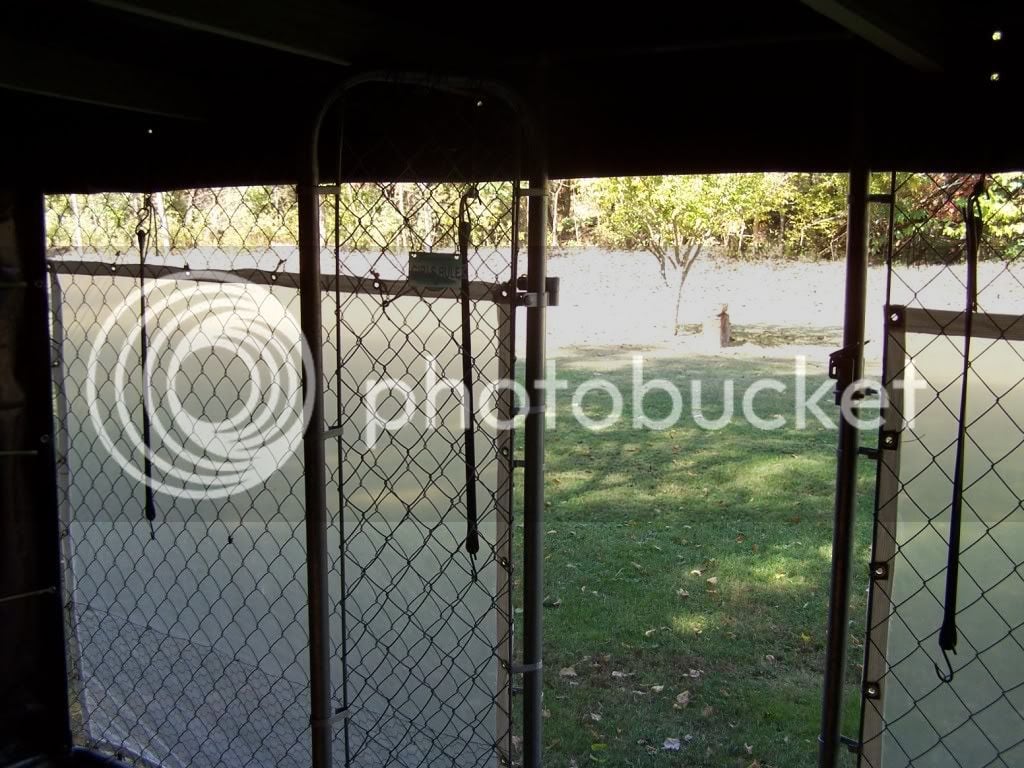 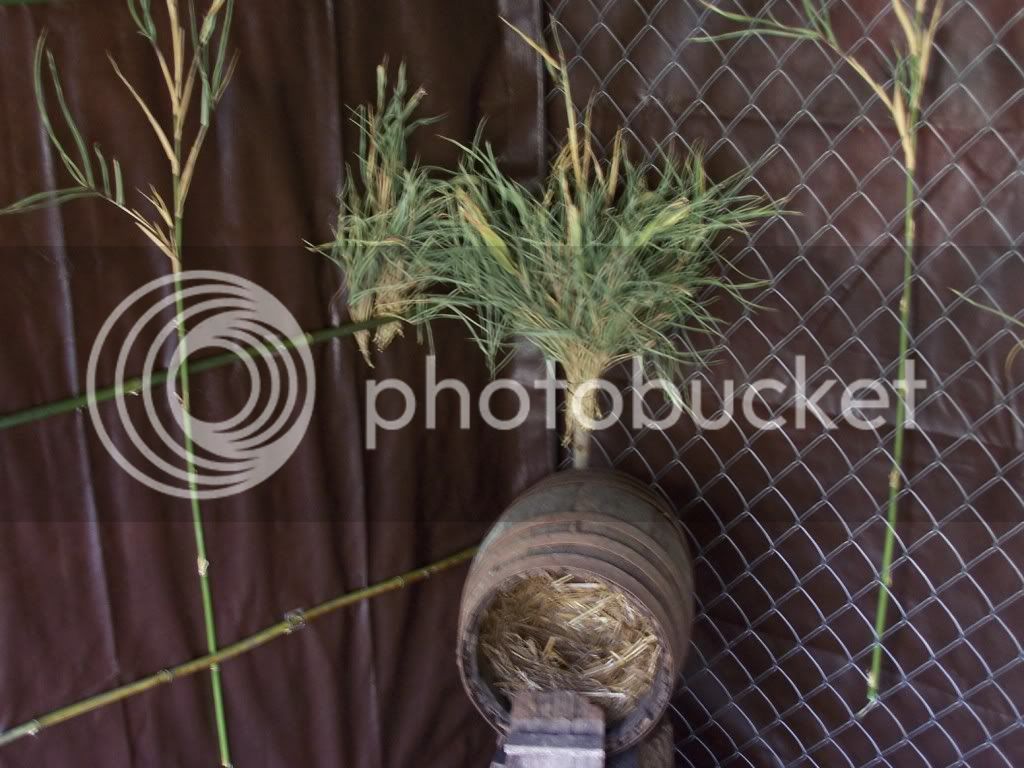 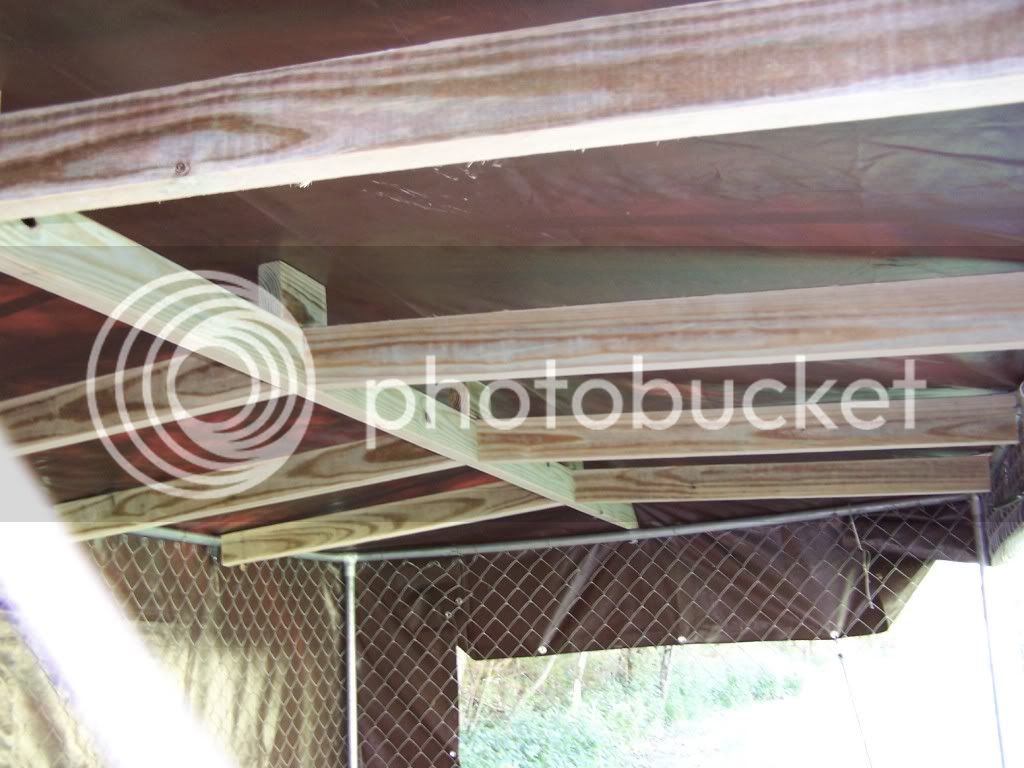 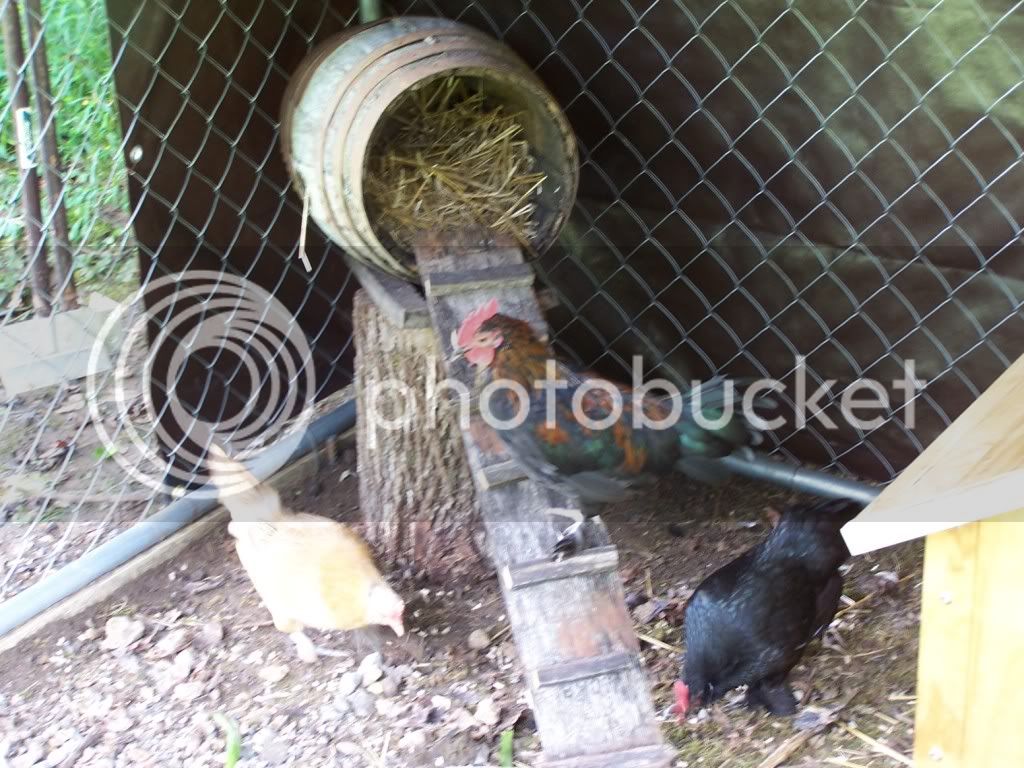 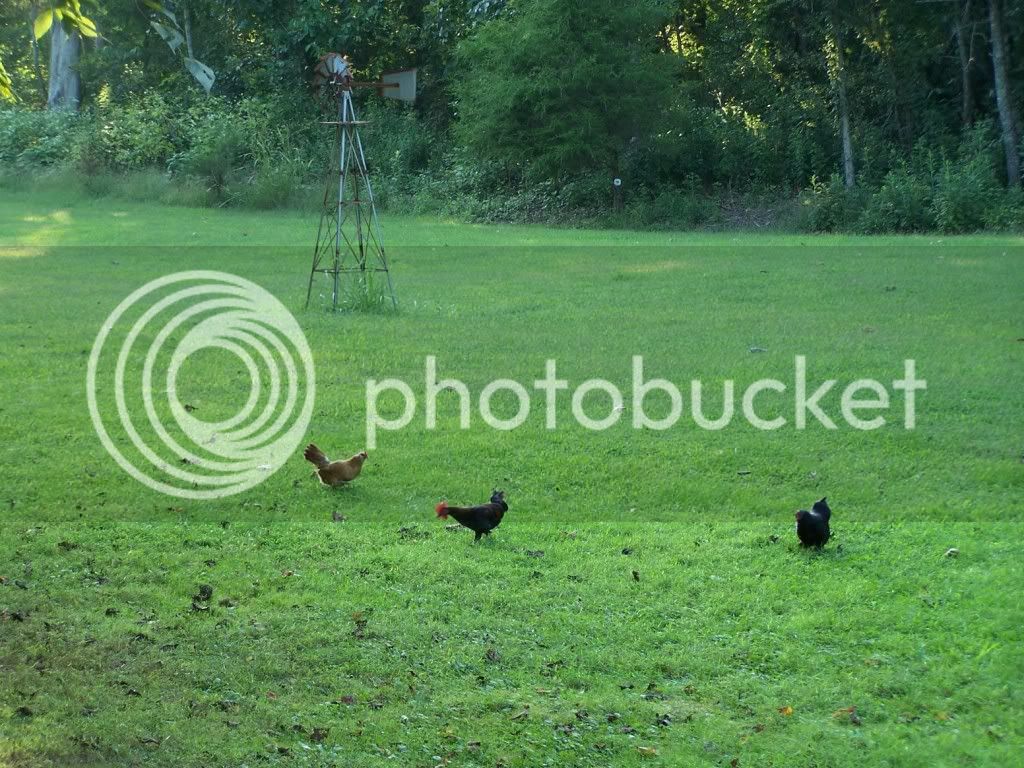 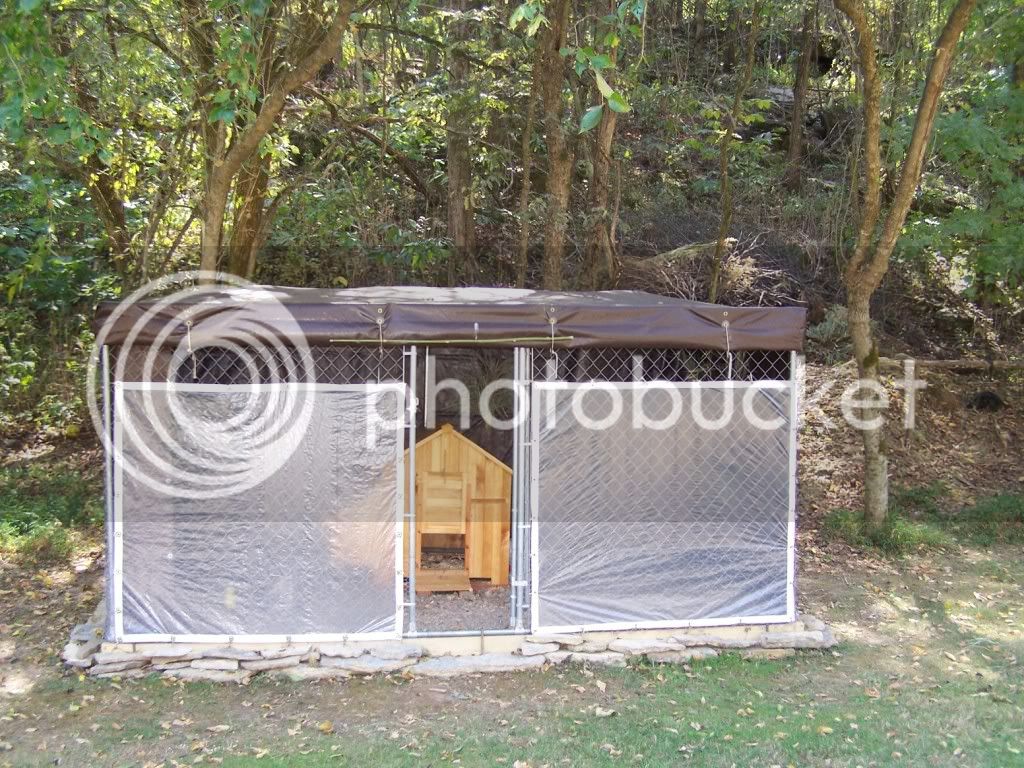 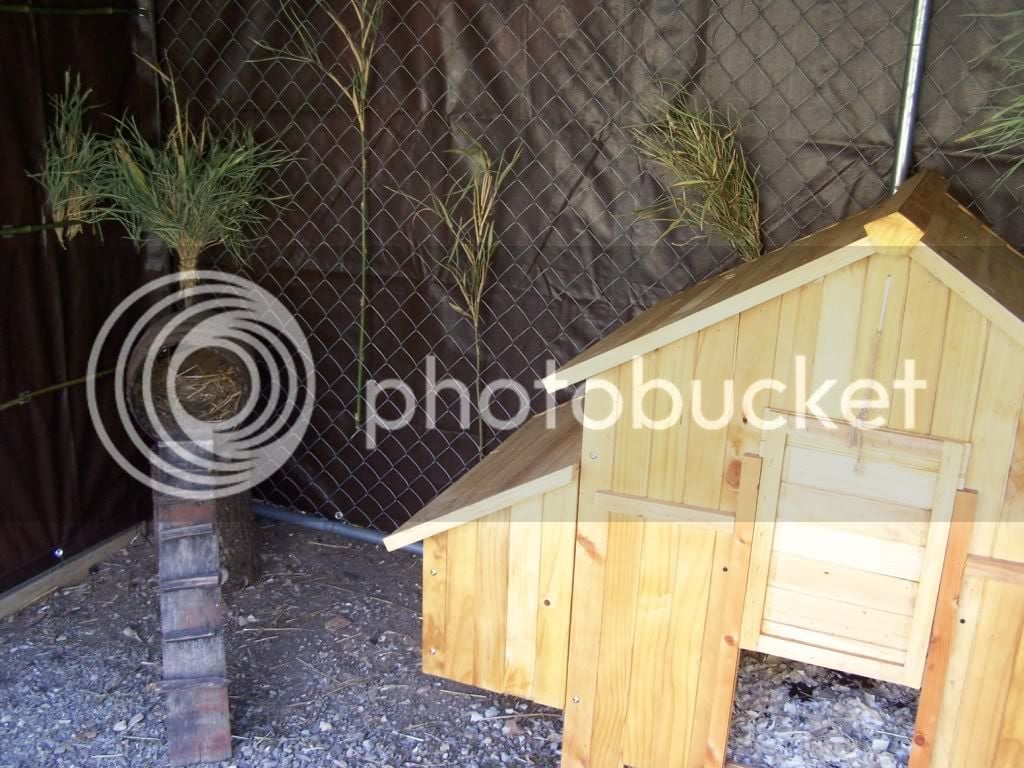 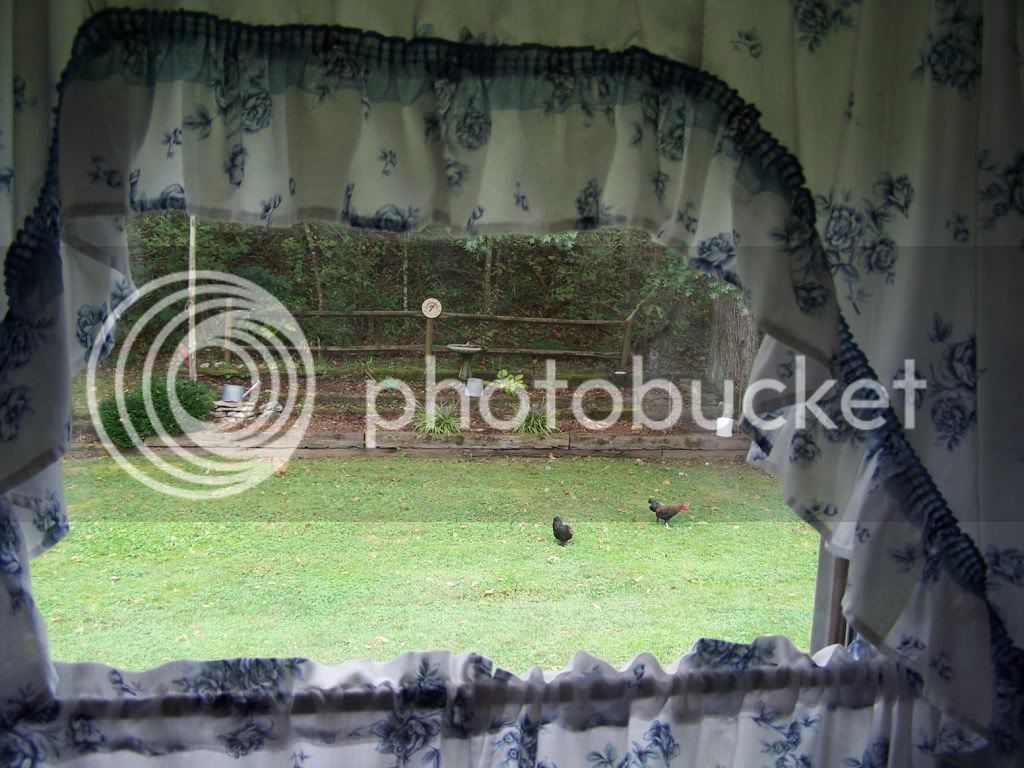 A warning about the coop in the picture. I bought it from some place on Ebay. I debated building one and decided to take the quickest way out. ALMOST a mistake. You will see these advertised a lot. BEWARE......The concept is great. The components are terribly made. I do a lot of wood working so rather than returning it I got out my clamps, Elmers wood glue and brad gun and spent a day re-fabing it and used the materials they provided. Otherwise it arrives as a real piece of crap. Hardware is the cheapest junk available so if you get tempted to buy one of these and your not handly with woodworking AVOID the temptation. Rebuilt it came out fine and I finished it off with a good coating of Thompsons Water Sealer inside and out and let it dry for a week before letting the birds in. Im pleased with it. A little clumsey cleaning as I attached the pull out drawer so it doesnt. There is access on both sides and the front so it only takes a moment to clean. I do so daily. Most people receive them damaged and send them back. Like I said if your handly you can use the concept and materials and put it together so it will last.
Last edited: Oct 15, 2010

As best I can recall from when I used to live in OH and NC, middle TN can expect to get a decent-sized dump of wet snow in many years, can't it? Like at least 6"?

And I hate to say it but I think the chances of your setup withstanding that are pretty poor. You'd be surprised how much even a very tight heavy duty tarp can sag when loaded with wet icy snow, and how not-actually-very-strong-at-all a chainlink frame is (or whatever fittings you've used to attach the 'rafters' to it). If you are *unfailingly* home and awake to go sweep the snow off every hour or two during a storm you might get away with it but in my experience weather seldom cooperates with a person's personal schedule

If you really want to try leaving it that way, and risk total destruction of your chainlink run, may I make two suggestions for relatively-easy ways to strengthen it? 1) Get something that absolutely will not stretch -- I suggest decent-weight chain, or metal cable -- and run it from the top of one wall over to the top of the other wall, attached to the top pipe frame. Do this in several places across the narrow dimension, and once along the long dimension. Snug it up pretty good, not to the point of actually bowing the frame inward but just barely shy of that. This will discourage the weight of snow/rafters from spreading the sides apart to a damaging extent. And then *also* 2) Get one or two posts that you can shove tightly in there, supporting one or two points under the 'ridge' of the roof. It is up to you whether you want to leave them in there routinely or just add them when possible snow is forecast. There can be half an inch or so of play, so they needn't be super tight to the rafters, but they DO need to be SECURELY TIED to the rafters (e.g. clipped into eye bolts or screwed on with brackets) so they can't shift aside and fall over.

In general though a tarp top does not work well on a run in areas that EVER EVER get snow. Read 'my run collapsed last night!' type threads from previous winters to get a sense of how powerful even a modest amount of wet snow can be.

Thanks for the input. I don't think Ive seen more than maybe 4" on an occasion in this are in the last 12 years and that was rare. I'll be adding additional rafters (5), edge beams and cedar poles. I wouldn't have gone this route if I were still living in an Illinois / ohio type of snow falls. East and north off here gets much more snow than I get. The tarp is not something I used on my flatbed but its not Walmart material either. Ive cut cedar poles that I'll fit in just haven't got there yet. The area along the treeline where its located almost never sees snow. I can have what we consider heavy snow and the ground remains almost bare though this area. The rafters at the moment are hung with angle brackets and the plan is to run my edge beams the length and then add my poles under the edge beams and the ridge beams 4 each. The frame wont experience any of the weight.

Anyway I'll probably add a heat tape and not let the snow stand if there is some accumulation.

I read your article on vents and I do need to work on that this week too.

Quote:
Thanks its a 20 gallon Jack Daniels barrel and has a really nice smell. The ramp is made from staves from a 55 gallon George Dickel barrel. I have one more 20 gallon I have planned to get in there. I just have to watch out and make sure they don't get the keys to my truck.

What a charming coop, Tom. You're lucky to be in a climate warmer than ours. If you ever want to see what we have to do, link up with the seasonal connection below!

love the barrel!!! Your birds are lucky to free range with such green grass.

Quote:
No comparison, you really have winters. We can get annoying cold but not the dangerous kind of weather you tolerate, and I really enjoyed the link. I recall one winter here that I saw 0'F early in the morning but it would get up in the mid teens during the day (-6C roughly) for a stretch. Thanks for the comments.

Quote:
Sparks NV!!!!! I've passed through there quite a few times when I was driving flatbed. Not much grass I recall. The greenery around here is abundant and I think I mowed every week this summer beginning in April and with 3 acres to keep up I felt like I lived on the mower. Now the leaves are falling and that will keep me busy for another month or so. The ground is not snow covered but only a few days thru the winter. The birds love it.

I purchased your same coop and borrowed my girlfriend's husband to put it together. He agreed that it isn't well made, however, like you, he added more brads and screws to make it sturdy. It also came with some broken parts but he fixed that, and put it on the garden wagon for me. I'm now putting sealer on the outside, and just need to hook it up to my 'tractor' cage, then bring on the chickens. I'm planning on just getting 2 hens because the coop seems so small, how many birds do you have?

Making a coop for hot summers?

A
Lightweight materials and ideas please!
2