I have 3 Pilgrims, 1 gander and 2 geese, since day old. 7 months old now. One of my geese is huge, she is bigger than the gander, and she wants to be the boss and leader, she has been attacking my sweet gander, to the point of cut on his bill, bleeding. I put poultry wound medicine on his bill and waited for it to stop bleeding, I think he'll be fine, but I figured I need to separate my aggressive female, to prevent more damage. I'm very concerned about her hurting him more while he is healing. I have her sleeping last night in a crate, on the other side of my "goose room" (it's a small garage type addition on our house with a divider, one side for geese and the other side for storage) because I don't have any more rooms in the house to put her in, and even though I wanted her separate I think it's better she is not entirely alone (they can see and hear each other)
I love my geese, they are my pets, but how do I stop my giant goose (Marigold) from hurting my gander (Charlie). My other goose is a normal size female (Trudy) with a mild, submissive temperament. I have observed Charlie being submissive to Marigold most of the time as well. It seems sad, because I thought the gander was supposed to be the leader?
My trio of geese come when I call them, play with toys, follow me around the yard, etc. So yes they are very good pets, not Christmas dinner. My husband and my mother know people who we can donate or sell Marigold to that want to eat her. So I'm distressed, wondering if I can or should try to rehome her, or figure out how to protect Charlie and still keep Marigold? Any advice would be greatly appreciated.

By the way, is it even possible that Marigold could be a gander? They are Pilgrim geese, and only Charlie is white. Marigold and Trudy are both gray. Marigold has the thicker neck (as a goose should) she is just so large! They are not old enough to lay eggs just yet. And Im in Cecil County, Maryland, in case anyone wants to take her in (not to eat her!) to Re-Home only

Percheron Chick is right, she may be a gander. Sometimes females can be hyper dominant, and I once had a super sized female too, but it’s more likely for females to be smaller and more submissive to ganders during breeding season which has started now.

Usually with pilgrims ganders are white but if a gander inherited one copy instead of two copies of the dilute gene he would be a dilute grey so I suppose it’s possible to get a grey pilgrim gander.
Excerpt from the gene color article https://www.backyardchickens.com/threads/our-guide-to-colour-and-pattern-genetics-in-geese.561779/
“if a male inherited a single dominant dilution gene it also appears visually as a dilute grey. However if it inherits a double dose of the dilution gene in its dominant form then the visual effect is White. This effect is known as being Dimorphic, meaning the birds can be visually sexed by their colour. Males will be white and females a dilute grey and it is this gene that is responsible for the Pilgrim breed. In a single dominant dose it dilutes the colour and in its double dominant form the effect is strengthened and the bird appears visually White.”

Like I said though there’s always the chance you could just have a big bossy girl. 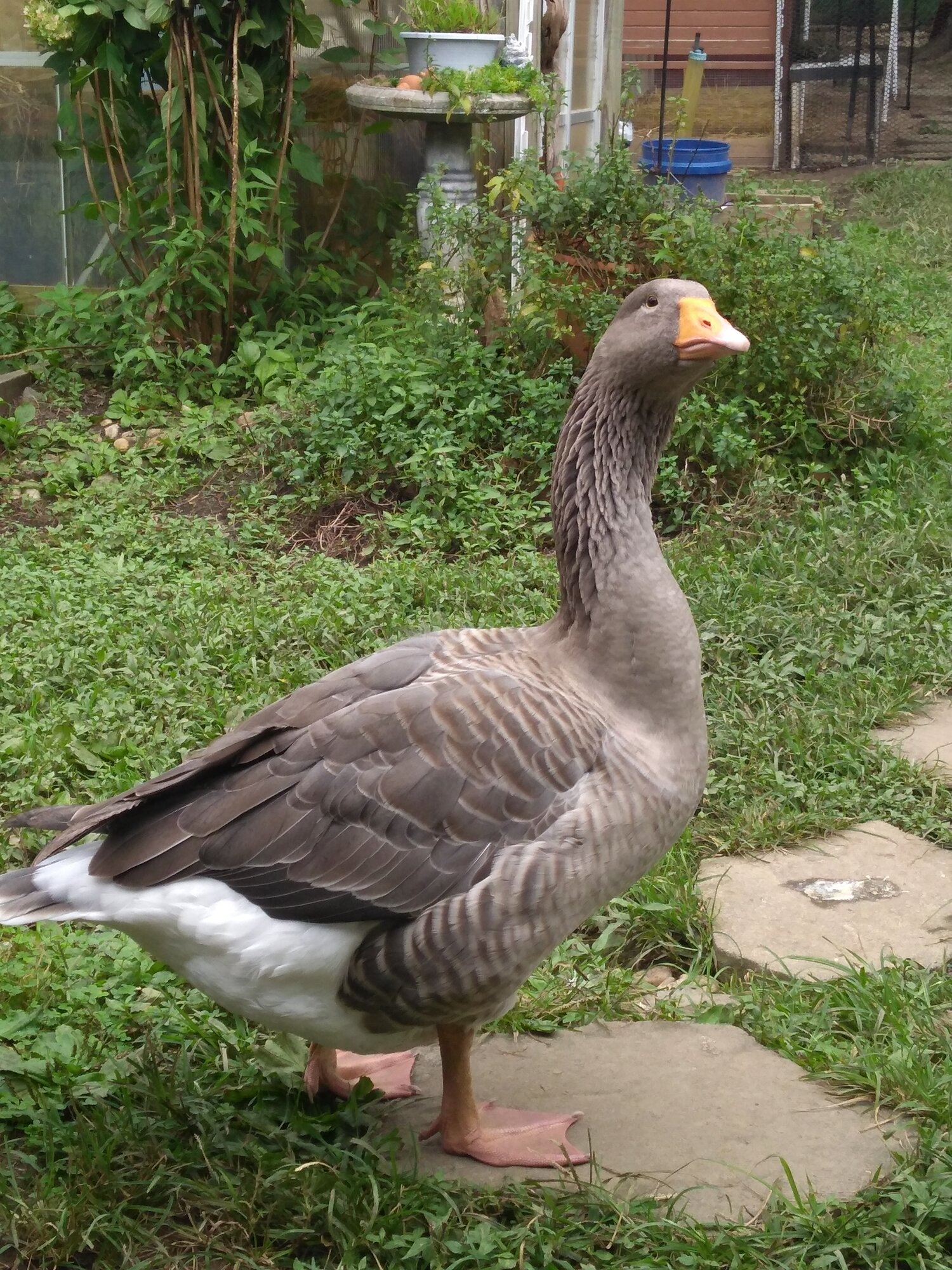 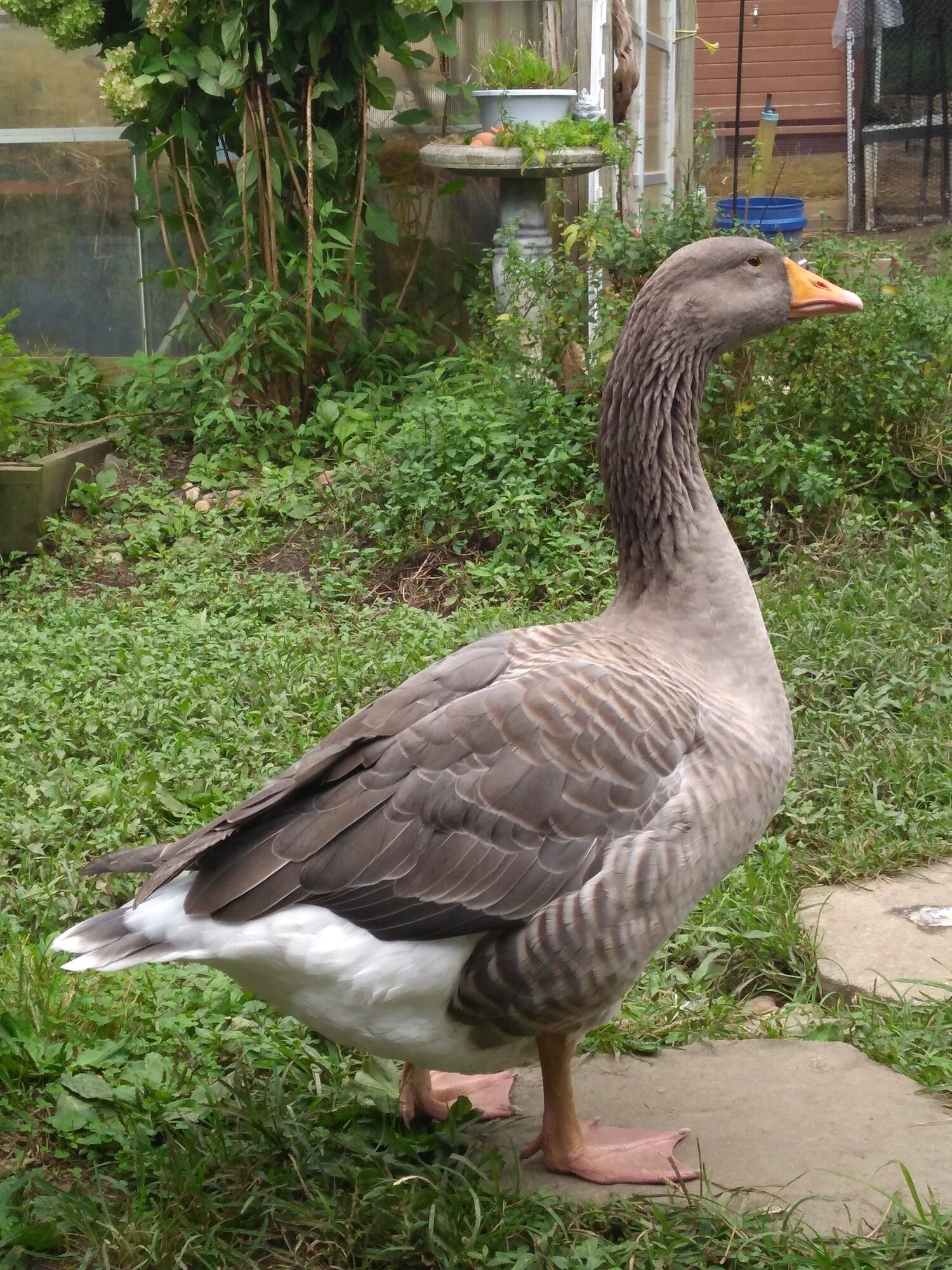 That is Marigold. Since my post this morning, I weighed her, and to my surprise she is only 13.5 lb. I would have guessed 20 lbs, but no. must be mostly feathers! I have not weighed the other 2 yet but plan to try tomorrow. I also checked her pelvic bones gap and it is 3 fingers wide, and I checked Charlie's which is only 1 finger wide. Which tells me she is probably just a big bossy goose, and my other goose & gander are just a little on the small side (weigh in tomorrow...) I put them all back together again and am hoping Marigold has learned a little lesson? I watched them most of the day, and corrected her (calm but firm verbal warnings) each time she looked sideways at Charlie. I want to keep trying to work with her and hopefully train her into better behavior. Is there any kind of guide /book that would help?

They’re pretty young, they even still have baby voices so they’ve still got a little growing left to do, as the gander gets older he may get more dominant. At this age they’re starting to sort out where everyone’s place is in the flock and it can change quite often sometimes, I’m not too surprised now that you have a bossy girl, I have a female buff who was challenging and fighting with her much larger brother not long ago and they’re just a little older than yours.
Give it a little time and I think she’ll grow out of her grouchy teenage mood swings probably.

If there’s a guide book to goose behavior I wish I had one years ago, it would have helped me figure some things out, I guess all we can do here is give some advice based on things we’ve seen.

Geese are very individualistic, they definitely have their own personalities, they even like and dislike different foods, it can be good to introduce them to a wide variety of foods so they don’t become picky eaters, but that can happen anyway.

The more time you spend with them the more they’ll like you, with geese if you don’t put in the time to be a flock member you’re just the person who feeds them but isn’t necessarily a part of their clique.
Chewing and biting are separate things, if your geese chew on your clothes, shoes, or any part of you it’s just them interacting with you, sometimes when they’re young they don’t always understand appropriate pressure so if they bite down too hard I gently hold or rub their beak and say “be soft.”
A real bite will start with what I call snaking, they’ll approach with the head lowered aggressively. If they act aggressively I tell them NO and if they still continue I pick them up and carry them around a little before I set them back down, it’s the kindest way to snap them out of it and remind them who’s boss, eventually they’ll learn that NO means if they don’t stop misbehaving they’ll get scooped up like a naughty baby.
Things like buckets, boots, bowls, large bags, when they’re being moved have a strange way of becoming enemy #1 to horomonal ganders in breeding season. No one knows why, but it’s something to be wary of.
Ganders can often be very parental, I’ve even seen them boot the girls off a nest so they can sit on eggs for a bit, ganders will raise goslings on their own even.

Honks are basically their way of contacting one another or announcing that there’s interesting activity going on. Sometimes I’ve heard mine make a low or soft “heh heh, heh” sound if there’s something scary like a low flying hawk or a snake. Hissing is a warning, “Keep Away!” Then there’s a sound they make sometimes when they’re happy or content that sounds kinda like a “whoo, heh, ha, or hrrrr.” Then there’s the every day chatter, that bababababa they do, I’m not sure really what that means but they tend to be in a good mood when they do it. Females make a rage cackle, it’s a high pitched rapid cackle like a war cry they use when they’re upset about something and it can drive even a well behaved gander into attacking just about anything.

Geese will quiver or shiver their neck when they’re annoyed or anxious about something.
Geese also bow quite often, sometimes as a greeting, sometimes it’s a greeting with a mixture of “I’m not quite sure about you.”
They’ll honk or chatter as they bow, if they’re silent and pointing their beak it’s not a bow it’s an aggressive gesture telling the target to back off, if they stop looking at you and start focusing on a particular part of your leg while pointing you’re about to be bitten.

Also bites can range between just a bad pinch to something bad enough to leave a nasty bruise but in my opinion wing beatings are the worst, so if you have a goose behaving threateningly it’s best to deal with it by picking them up as quickly as possible and holding them so that their wings are pinned. Aggression in geese generally only happens when a goose isn’t socialized enough with the person they're aggressive to or their horomones have gone to their heads and they just can’t help it, if you interact with your geese on a regular basis it’s unlikely they’ll become aggressive to you. Most geese fear and avoid strangers, it’s only people they know but that they don’t interact with often that can have issues. Overall though geese are very affectionate creatures.

Thank you so much goosebaby, that is all very helpful! I'm very hopeful now and appreciate your time writing that little miniguide! wonderful

H
Adding trio to my 1 gander

Pairing a goose with a gander